A Summer Triangle, Eagle, and Family Shaft -OR- Tarazed and Oooza 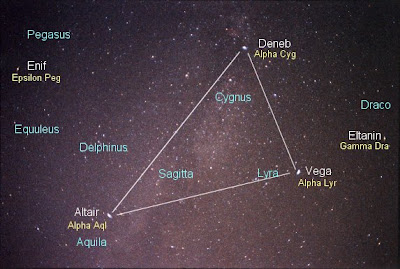 The Summer Triangle is an asterism (pattern of stars) as seen from Earth, most prominently from the Northern Hemisphere middle latitudes in summer. 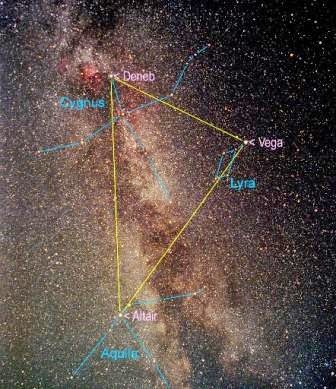 The Summer Triangle (with stars labeled and figure diagramed) consists of the stars Altair, Deneb, and Vega -- all impressive stars, in particular Deneb and Vega. It runs right through the Milky Way and parts of the constellations Aquila, Cygnus, and Lyra, of which Altair, Deneb and Vega are the brightest "alpha" stars, respectively.
More info here.


Altair is part of the constellation Aquila or "Eagle" and consists of 140+ stars and star fields although only nine with Bayer designations have Arabic, Persian, Hebrew, or even Mandarin names. The full list is here. 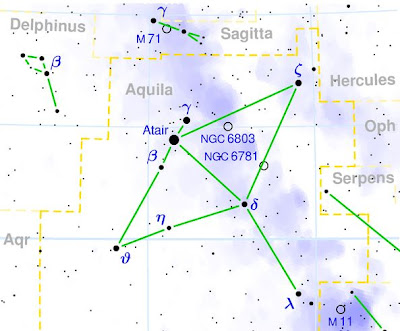 Visually very close to Alair is the star Gamma Aquilae but that has the traditional name Tarazed. (I'm not sure why it is the gamma star since "Beta Aquilae" [Alshain] is noticeably dimmer than "Gamma Aquilae" [Tarazed], and I always thought that the Greek letter designations for stars in a given sky constellation ran down the Greek alphabet starting from alpha as they appear dimmer, which is to say, as their apparent magnitude number increases.) 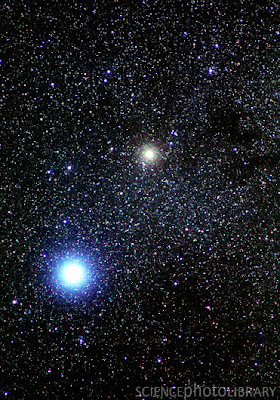 Left: Here is a photo of Altair and Tarazed.

Tarazed is a massive star. While Altair is a spectral class "A" yellowish - white star located 16.7 light years away and has a mass of 1.8 times that of the Sun (and rotates at a tremendously fast rate), Tarazed is a spectral class "K" golden orange super-giant located about 460 light years away and has a radius of at least 1/2 AU (that is, half the Earth-Sun average distance).

A map of the night time sky showing the Summer Triangle and nearby constellations. 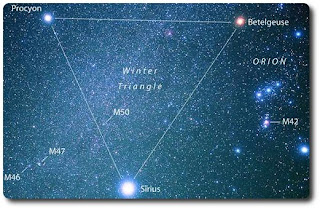 The Summer Triangle is currently riding high in the night sky -- basically overhead. It should not be confused with the Winter Triangle.

It consists of consisting of Sirius, Betelgeuse, and Procyon, which is actually a partial subset of a larger formation called the Winter Hexagon that includes Sirius, Procyon, Pollux (or Castor and Pollux), Capella, Aldebaran, and Rigel. Betelgeuse is located within the Winter Hexagon. 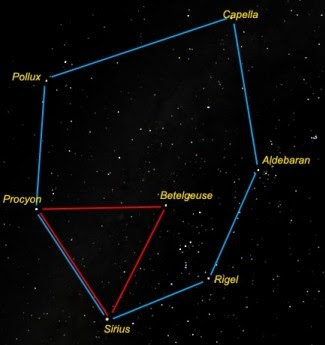 The Winter Hexagon and the Winter Triangle.
#######

And then there's Lady Oooza ... 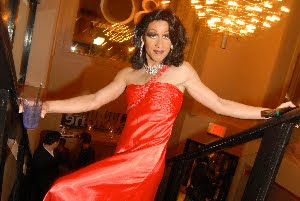 ... with her echo of the elegance of yester-year. 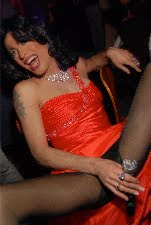 It's really too bad Sinatra still isn't around. He could have sung new versions of The Lady is a Tramp, I Did It My Way, and They Can't Take That Away From Me. Think of the endless lyrical possibilities. 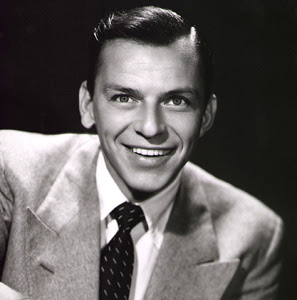 
OK, that's all for now. I think I'm going to Nellie's tonight to meet Gary and Jamie and Jamie's friend who is in town.
--Regulus