Entry Preview -OR- Around the Blog Maypole Dance 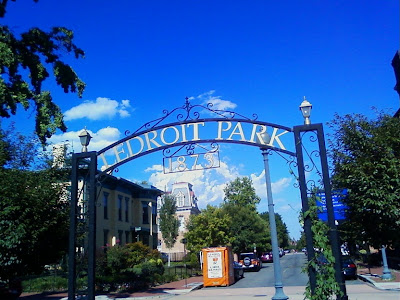 The "entrance" to Washington, D.C.'s LeDroit Park neighborhood just off Florida Avenue where U Street is interrupted. I walked there in search of The Tree -- which I think I FOUND at the corner of 3rd and U Streets, NW (not Northeast D.C.), but that's for another entry. Thereafter, I went to Nellie's for a bit.
The sky was a cerulean blue in the intense 97F heat but suddenly dry air -- dew point only about 48F. However, a "dew point front" was moving in from the east with dew points jumping dramatically (including an astonishing 22F at DCA in a single hour between 5PM and 6PM -- I'm a bit skeptical of that).
Alas, it brought us no needed rain. 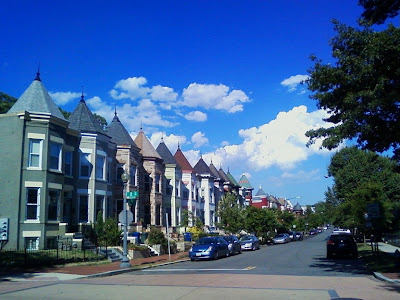 OK, I'm a little ticked off -- I was writing a lengthy entry (OK, an excessively lengthy entry) but I simply ran out of time (it's now midnight and I REALLY need to go to bed) and, more importantly, lack a sufficient number of pictures. Thus, my plan now is to post that entry (or some variation of it) tomorrow.
Key points I would like to touch upon: 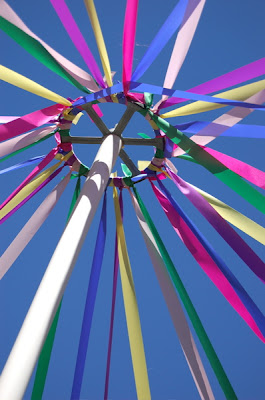 * The Last Word: Lawrence O'Donnell & Matt Damon Defend School Teachers (with Mr. Sirius Detour and why I call bullshit on the likelihood of its teaching career -- he's not giving up that lucrative D.C. gay mafia operation under crow-like Capo). 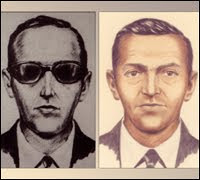 The FBI thinks it may have a new lead -- except the would-be culprit has been dead for 10 years. I keep thinking of that line I read somewhere: "He parachuted out of that jet plane (on a stormy night in Nov. 1971 over remote Washington state) and into legend ...") 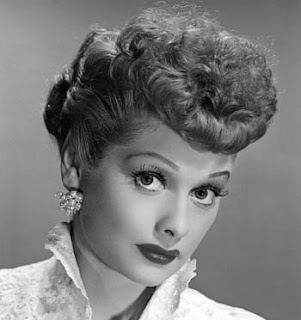 BTW, I LOVE the under - appreciated factoid that if it weren't for Lucille Ball, Star Trek (the Original Series and subsequent incarnations) might not have ever existed.

It was her production company Desilu -- and Ball in particular -- who liked the idea of the show.

*Weekly Doings -- Miscellany including work/found that tree/student loan debt update.
*Musical Interlude - Maybe Taylor Dayne's 1989 #1 hit song Love Will Lead You Back.
However, all of that will have to wait until my next entry. 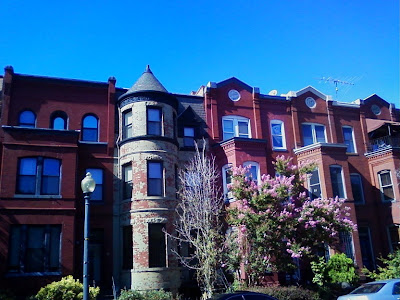 Again, I will try to post the intended entry tomorrow, except I'm short on good / relevant pictures.
--Regulus
Posted by Regulus at 12:04 AM