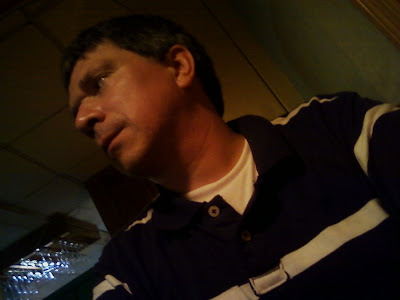 Yours Truly at the back table in City Lights of China restaurant waiting for my order of moo goo gai pan* to go, Washington, D.C., 9:56PM, July 21, 2011.
This was on THE MOST sultry - humid night of the year -- and almost EVER in D.C.
*BTW, my mom used to have a cat back in the 1980s in Glen Burnie, Md., that we called Boo Boo Gai Pan, although her actual name was Kimchi. She was a horrible cat who eventually ran away.
#######


Today was an OK day -- and even as I made an appointment to see my dentist next week, my immediate dental (gum) issue (tenderness) went away (at least for now).
Tonight, I went to Larry's Lounge with Kristof, where I had a nice time. I also walked over in the stultifying air to City Lights of China on Connecticut Avenue near Dupont Circle, where I got moo goo gai pan to go and had it here at home (although I stopped back in briefly at LL en route home and unexpectedly met LP). 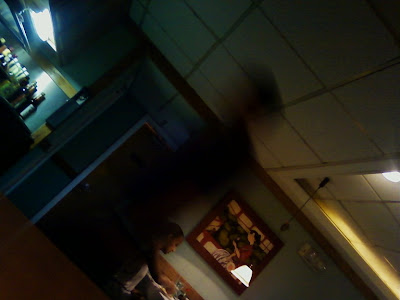 
The weather was beyond disgusting today, except there were enough billowing cumulus congestus clouds in the sky, along with a southerly breeze, to make it not absolutely hideous. 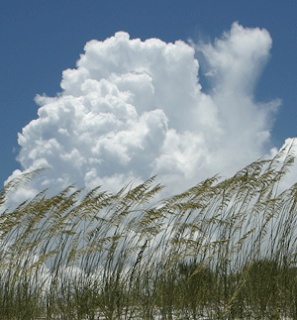 None of these were daily records, though -- remember, we are at the absolute hottest time of the year.

In fact, right now at midnight on 7/22 we are at the exact midpoint of the peak of summer. 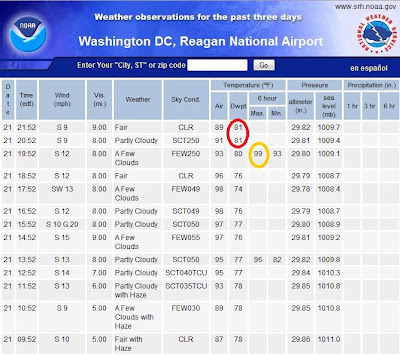 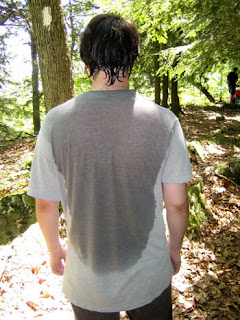 More newsworthy, the dew point temperature reached 81F a short while ago at DCA during two consecutive hourly observations (see above image).

The ALL-TIME record dew point EVER at DCA, I believe, was 82F. ... REALLY NOT SURE WHAT I CAN DO TO IMPROVE THE FCST ATTM. HEAT WRNG STILL EXISTS E OF THE BLUE RDG ... AND AT 8 PM BOTH DC AND BALT REGISTERED HEAT INDEX VALUES INXS OF 110.
...

WL THAT COOLER/DRIER AIR BE WORKING INTO THE MID ATLC? PERHAPS TO SOME DEG ON SUNDAY ... BUT AFTR MULTIPLE 100+ DAYS MODERATION WL PRBLY BE SLGT. BUT THE END OF JUL/ERLY AUG IS TRADITIONALLY THE HOTTEST TIME OF THE YR. BUT BY THE 2ND WK OF AUG TEMPS USUALLY START TO FALL. IN THE MEANTIME - PLS HEED WRNGS ... ADVICE IN THEM ... AND TAKE CARE OF EACH OTHER.
#######

A New York State of Mind...


OK, I think that's all for now. I'm going to bed. My next planned update may not be until Sunday or Monday.
'Night.