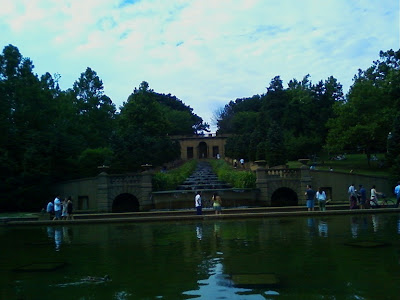 A pleasant, albeit from humid day, in Meridian Hill Park very near where I live here in Washington, D.C., 4:50PM, June 26, 2011. The fountains were all turned on, although the water was quite green.
FYI: Yes, some folks call it "Malcolm X Park." I will NEVER call it that, no matter how good a man was Malcolm X. The park's historical and proper name is Meridian Hill Park.

The park has some strange sculpture including Joan of Arc on a horse (though she long ago lost her sword), President James Buchanan (our likely only gay president, but also a disaster of one) and Dante.
####### 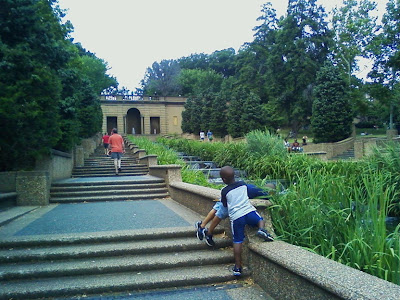 I was going to post a full entry tonight but I ended up going to the grocery store -- remember, I have to walk and lug things back -- and doing my laundry, all after I got home around 630PM. And it is Monday night, so I'm watching the line ups of Frasier and The Golden Girls on Hallmark Channel and We TV. Earlier today, I finished my Orem City compliance case draft report. 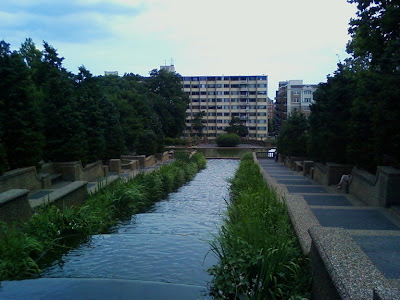 Looking "south" down the terraced fountain of Meridian Hill Park, 4:53PM, June 26, 2011, Washington, D.C.
My apartment building is behind the main one facing the park -- a sliver of it is visible down an alley way in the above image.
#######

Last night, I had a surprisingly good time at Nellie's with the gang -- by which I mean J. (yes), Kristof, Gary, and even Li'l D. Earlier, I walked to Target in Columbia Heights where I purchased some needed clothing and kitchen items, as well as two pillows. And this evening, I went to the Metro Center Macy's, where I purchased some more clothing. 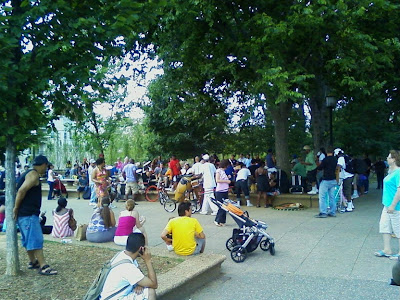 Just some of the crowd in Meridian Hill Park, Washington, D.C., 4:54PM, June 26, 2011. It's like a bit of Woodstock there every summer weekend day. Now at night, it gets a bit dodgy.
I was walking to the Target. Kristof helped me carrying some of my purchases and we walked back through the park. I then returned to the Target to trade UP a size one of the pairs of pants I bought. Boo.
####### 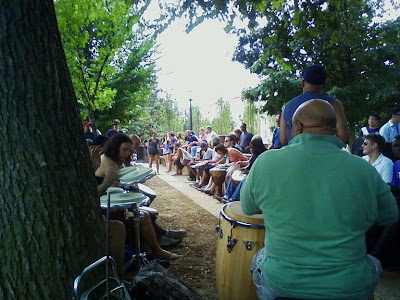 I am quite tired now and honestly I cannot get myself worked up about anything right now. Just DAILY read Paul Krugman's New York Times blog though.

The crazy GOP Teabaggers are pressing for a U.S. Government default to hasten the arrival of the oligarchical corporate fascist state that we aren't far from anyway, no matter how many 2011-style hippies loll about in Meridian Hill "Malcolm X" Park on a warm summer day in the Capital of the Empire. It's Grover Norquist's and the Koch Brothers' wet dream. 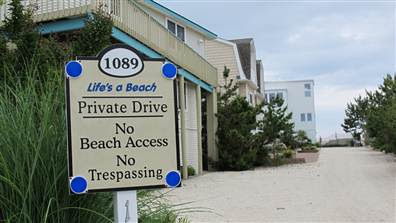 And read this this article about the perennial beach access wars along the Jersey shore that is entering yet another phase.
Oh, yes, I THINK Gary and I are going to Wildwood, N.J., Aug. 26 - 29th. I hope so.
####### 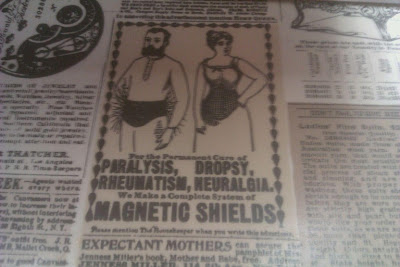 The counter top at the Wendy's along Greenbelt Road in Kettering, Md., taken by J. yesterday (June 26, 2011). He was there with Gary playing softball.
Some of my friends and I have an inside joke about the word "dropsy" -- an old and no longer used term that referred to softness in the tissues due to excess water, and thus was more a symptom rather than an actual disease or malady. Today "dropsy" is referred to as edema, and it has a variety of causes including congestive heart failure.
From The Onion's Our Dumb Century: A March 1902 sheet music hit song: "Ernestaria, Darling, Please Do Not Die of the Dropsy."
#######

I'm going to bed shortly. I had a very strange apocalyptic dream but it would take too long to relate right now. 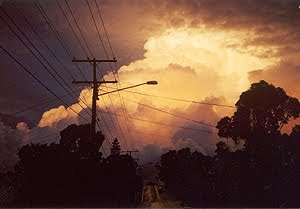 Suffice it to say, it involved multiple tornadoes, the Chinese, huge and scary power lines being destroyed, and hurtling down a darkened bicycle path in the woods with my mom and dad, trying to get over a bridge before a series of huge power lines fell / exploded, and then my dad was gone and it was just my mom and I nearing that blackness.

Then I woke up. 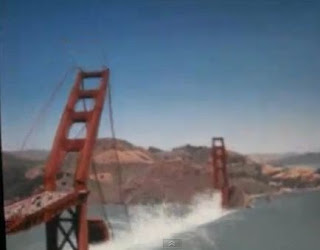 But I went back to sleep and the dream continued. We had to cross over a damaged bridge to get over a river and head back to D.C., where we would remain.