Reflections on Endings -OR- "the whole forgotten tremendous past ..." 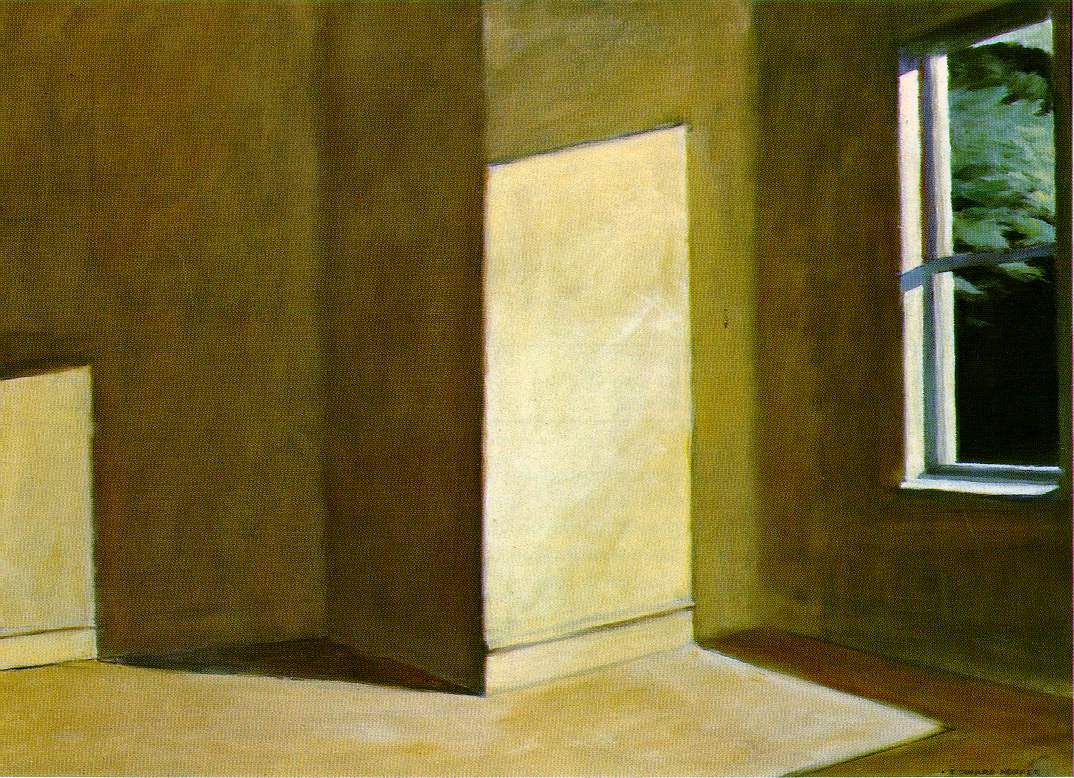 "What remained after the hopes had failed,
after the houses,
the cars, the secrets, the books,
the guns, the children, the rooms,
the whole forgotten tremendous past
was, of all things,
the future." 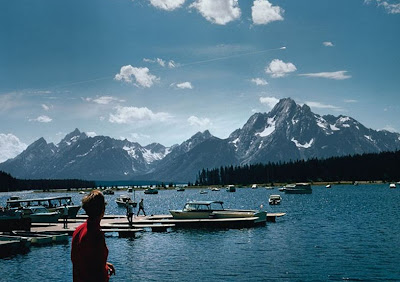 The Great Daylight Fireball of 1972 as seen over Lake Jackson and the Grand Tetons in Wyoming on a tranquil summer day, August 10, 1972.
It has been estimated that the object was between 3 and 14 meters (probably about 10 meters, depending on composition -- carbonaceous chondrite rock or cometary ices). 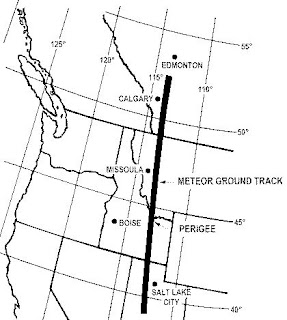 The object entered Earth's upper atmosphere at hypersonic velocity but at a very shallow angle over central Utah and within 100 seconds had traveled approximately 900 miles due north to near Edmonton, Alberta, where it reentered space.


Interestingly, the object is probably STILL in orbit about the Sun and made another close pass of Earth 25 years later in August 1997 (although somewhat smaller since it lost quite a bit of mass in its 1972 near-death experience).
Had it collided, it would've most likely detonated between 40 and 80 kilometers in altitude, creating an air burst between 1/2 and 2 kilotons.
Here is a home movie shot by Linda Baker taken from roughly the same area in the Grand Tetons ...
It only lasts about 20 seconds and the quality isn't that good -- but this was 1972 and it's not like she knew it was coming.
#######


Speaking of which, here is a picture of what I looked like a month earlier in July 1972. 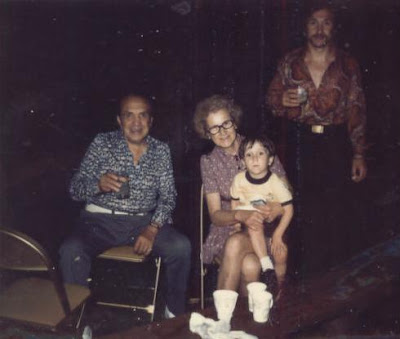 
OK, so this isn't a blog entry I particularly wanted to write but it has to be. I've come to the conclusion that several of my friendships, including a long-time one that has been quite important to me with Kristof, are essentially over. Yours truly in July 1974 at age 4(two years after the above picture was taken) standing beside the big hydrangea bush at the house at 368 Kirby Avenue, Long Branch, New Jersey.
Was I a cute little boy?


There was another bad episode involving me last night with him and (as ever) J. More to the point, Kristof really doesn't even seem to like me that much (never mind when there is an episode with me).
The situation with J. is just untenable -- somehow it has reached the point where it's like being in a very unhealthy that feels to me like an emotionally abusive relationship. I just can't handle him any longer. 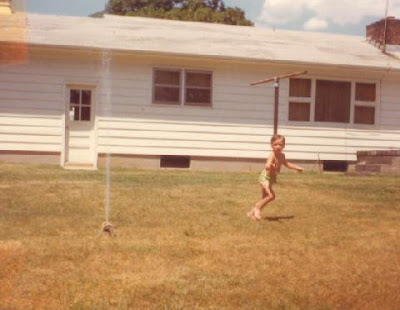 Yours truly as a little boy in August 1974 (a month after the hydrangea bush image) running around in the sprinkler on a hot summer day in the big backyard of the house at 368 Kirby Avenue, Long Branch, N.J. It looks kind of drought-y dry.
The big tree in the front yard visible above / beyond the house died in 1988 (8 years after we had moved from here and, curiously, right when my grandmother died).
#######


As for other friendships, I can count at least two others that have ended, including a once very close one with Wall-P .... 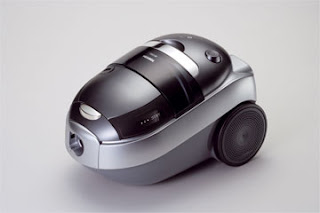 ... who for its part, would read read the above and say (translated from that rapid-fire binary code of clicks, clacks, and grunts in which he communicates):

"Eh, eh. This PROVES my own analysis. DEAL with it. Eh. Ehehe.  GET IT TOGETHER. Wait, I have to take this client call."
And then there is his attempt at being subtle to someone he didn't even really know: "Hmmm, what do you think that your husband is bisexual and does club drugs...?"
And then there's (at a dinner party): "Hmmm ... Remember the time you tried to kill yourself by eating cyanide."
Anyway, as some (most) of you know, I have some mental health issues that make certain aspects of my life particularly vexing including occasional liquor-fueled emotional outbursts. 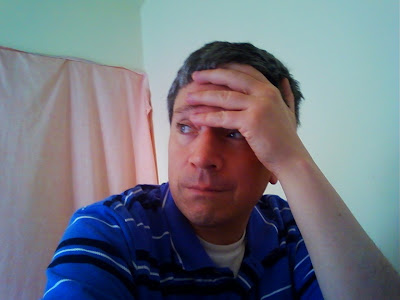 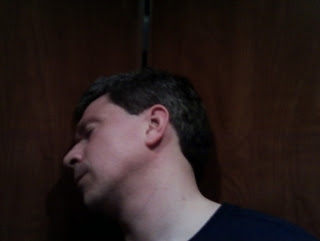 And the life I lead as an urban gay man in his early 40s, alone and not likely to have a partner ever, and the lifestyle that involves too much drinking and an unhealthy and empty bar life.


My friends remain, especially Quill, Mike G., and (on my good days) Gary. He and I are planning on going here this Saturday, and I hope to be able to meet Bryan Wright.
Here he is playing "Roberto Clemente" at last year's festival:
And here he is really letting loose on the piano several years ago with "The Harbour Rag": 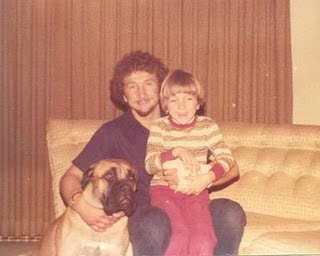 
It was in Sept. 2010 that I found some pics of what the interior of the house and the backyard look like now. It was from a Zillow.com real estate posting I found that isn't there anymore.
I posted these pictures in my entry here. 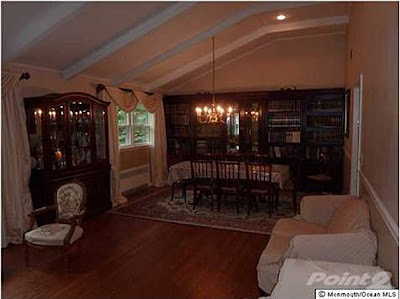 But here is what the dining room looks like in 2010. 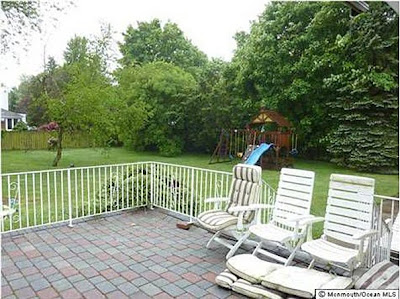 
And since I'm posting old / scanned pictures that I've posted on this and/or my other blogs, here are some more: 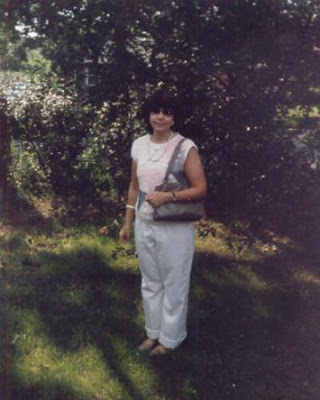 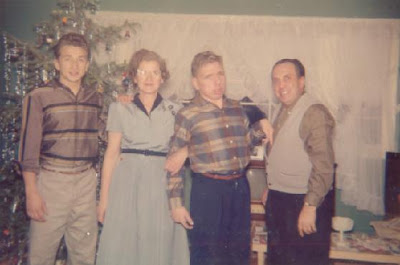 My dad (looking like James Dean) at about age 16, his brother (my uncle I never knew) Richard, and my grandparents in the house on Cleveland Avenue in Long Branch, N.J., where they lived at the time, circa 1957.
Richard, who was 13 or so, had cerebral palsy that got worse as he got older and 6 years later in March 1963, he died from an infection following some kind of possibly experimental brain surgery. He was 19. My grandmother never got over his death. Today, there would have been a huge malpractice lawsuit, but that really didn't happen back in the early 1960s.
Anyway, I was named for him when I came along 6 years later in late 1969.
####### 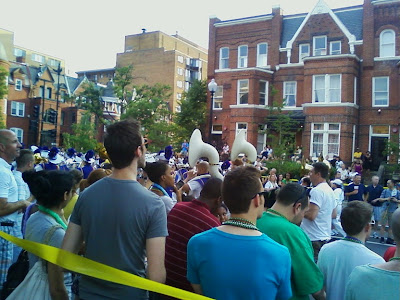 
One last really old picture, or rather, a picture I took earlier today of something really old that for some weird reason I still have in a drawer filled with miscellaneous things ... 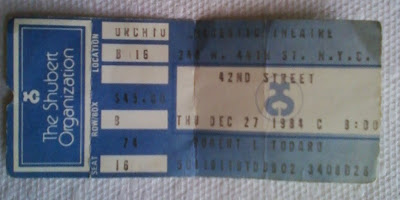 This is a ticket to the musical 42nd Street that my dad and I saw at the Shubert Theatre in New York City on December 27, 1984. This was actually my dad's ticket (his name is on it). I've no idea how or why I kept it after the play and how it ended up with me all these years later.
#######


I was going to complain about the weather (D.C. proper AGAIN missed all the t-storms yesterday while Northern Virginia got hit again) but I don't really feel like writing about that now. It was much more pleasant today (high around 80F versus 96F - 102F last week). 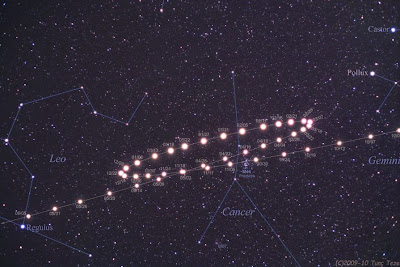 One last item ... Here is the APOD one year ago today showing Mars' retrograde motion executing a loop in the sky over the course of 9 months between Oct. 2009 and June 2010 ending up on June 5, 2010 right near my namesake star, Regulus. Dates, constellations and stars are conveniently labeled.
#######


OK, that's all for now. My next planned update won't be until later this week.
--Regulus
Posted by Regulus at 7:52 PM

i always like the blog entries that deal with the past. especially containing the old photos.

the ticket to the broadway show is priceless... i used to have like a showbox full of sentimental stuff like that - i don't have it anymore, and it makes me feels oddly disconnected...

i hope you and kristof patch things together.

maybe you two just need a break for a little bit...

Thank you, Mike, for the kind words. I'm not really sure there is much hope for my friendship with Kristof (we'll see). He hasn't been around this blog all week. As for everyone else -- the usual gay bar crew -- I'm not sure where that's going either, but if all those friendships are going. I need a whole new life. Anyway, I appreciate your comment.

Oh, yes, I keep meaning to post a large version of your avatar picture -- you as a young teenager at the edge of the Caspian Sea circa 1987, except it looks circa 1950 with the black and white. As you know, I always imagine that being that easternmost tip of land that juts out into the Caspian Sea east of Baku, but I know it is not.

there was a whole bunch of photos of us - galina, me and our close friends from that trip. oh, what a care free time that was - in the midst of what was brewing between azerbaijan and armenia, not to mention the already set in motion collapse of the soviet union... i should find them, scan and upload to picasa...

IMPORTANT NOTICE TO ALL THAT LIVE BY THE SEA OR OCEAN SHORE AT 1 FOOT TO 50 FEET ABOVE SEA LEVEL. Or with in ten miles of the coast. World Wide.

This will be a very close call i pray it is only that. Discovered on December 28, 2005 by Robert McMillan of the Spacewatch Program A potentially hazardous Asteroid known as 2005 YU55.

This Asteroid some what Large 400 meter-sized type – C, will pass by the Earth right between our moon and Earth. On November 8, 2011.

The people on Earth have not seen a Asteroid of this size in advance. One this big Has not impacted Earth in over at least 4 thousand years.

Most Objects that have a diameters over 45 meters or 147.637 ft strike the Earth approximately once every thousand years or so. Lying flat everything for hundreds of miles.

Like the TUNGUSKA 1908 SIBERIA, RUSSIA CRASH OR Tunguska Explosion. This one did not even hit the Earth with its full Impact, it burst high in the air above the ground plowing it apart into many smaller parts. Making thousands of very deep holes in the Russian forests. Many of them in dense forest far from any roads or towns.

One 400 Meters 1,312.3 ft in diameter like this one YU55 weighing millions of tons would if impacted Earth on land would darken all of the Earth not for just days but much longer.

It would change the weather not seen on Earth in over thousands of years a massive climate change to say the least.

Asteroids in our Asteroid Belt that is between the orbits of Jupiter and Mars do have collisions and some do turn into meteoroids many in the past thousands of years have come into the Earth's Atmosphere. Many of thousands of them make it into Meteorites the signs are all over the Earth, craters of all sizes.

The World and NASA will watch this one very closely.
Most likely more Earthquakes and the Oceans Tide will be strongly affected just from a near miss.