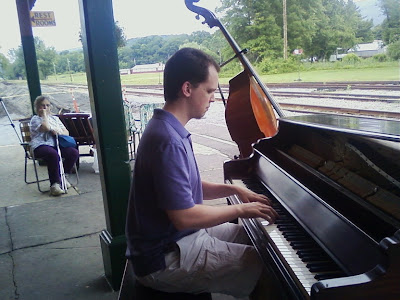 Here Bryan Wright plays the piano at the outdoor portion of the Third Annual Central Pennsylvania Ragtime Festival being held this weekend in Rockhill Furnace, Pa., 3:56PM, June 18, 2011. I went up to this part of Pennsylvania with Gary to see this event, and I was hoping to meet him and did (yay!).


I'm back from a surprisingly tiring 24-hour trek up to Huntingdon County, Pennsylvania to see (as noted) the 3rd Annual Central Pennsylvania Ragtime Festival. Gary and I went there by way of an overnight stop at Mark D's hilltop cabin set atop a sprawling, mostly forested 275 acre spread that "fronts" into far northern Frederick County, Maryland (Sabillasville) but that is actually mostly in Adams County, Penn. He purchased about 3 years ago an old summer Bible camp site that belonged to the Lutheran Church Missouri Synod that was known as Raven Rock. Of note, it turns out that two of my friends (Quill and D^2) actually visited there back in the mid-1980s in its previous incarnation. 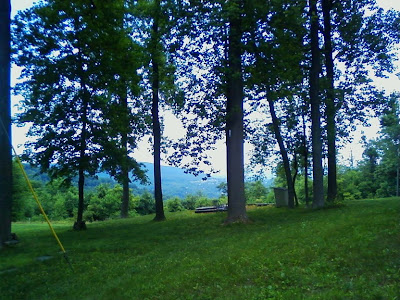 As I noted, Mark's address is given as Sabillasville, Md., but the actual house and most of the property is in Adams County, Pa. 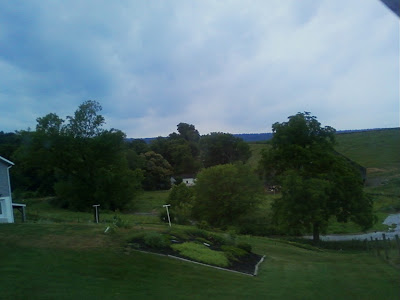 I'm not exactly sure -- and the road signage in (at least this part of) Pennsylvania is not so good.


Mark's place almost abuts a top-secret Pentagon site known as the Raven Rock Mountain Complex (RRMC) -- a.k.a. "the Underground Pentagon", "the Rock, "Site RT", or "NNMC-R" -- that is buried deep into Raven Rock mountain, and it is near Camp David. In fact, it's smack dab in the middle of the two.

(I'm sure I'm going to get some weird blog hits writing about that.)


It was so starry there last night even on a moonlit night with a thin high cloud deck and the view off to the north and northeast (toward Gettysburg) was so lovely. The Big Dipper and Arcturus were very prominent. In the winter time on a cold, blustery, moonless night it must be spectacular all around, and I'd like to go back up there then. 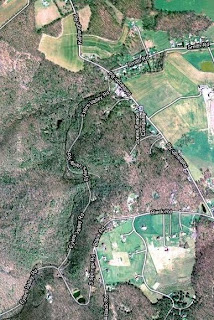 Gary did all the driving and it was, as it usually is, quite easy to travel with him, even when we got seriously lost in the forested night on a winding, narrow gravel road (DAMN YOU Eylers Valley Road!) -- see image at left -- with NO cellphone reception looking for Mark's place. And again earlier this afternoon when we took a wrong turn on Rt. 552 that caused us to intersect I-70 about 30 miles west of Hagerstown. 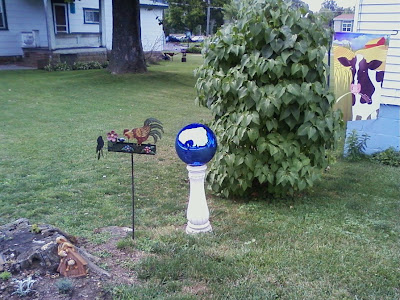 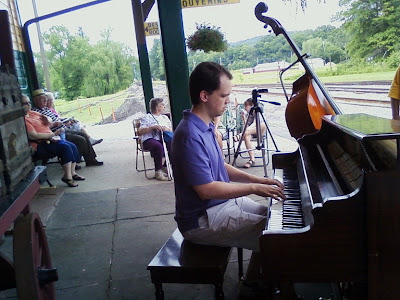 
The word "festival" for the event might not be the best term since it is really just about a half dozen people -- all tremendously talented -- playing piano rags and other instruments (including fiddle) outside the Rockhill Trolley Museum. 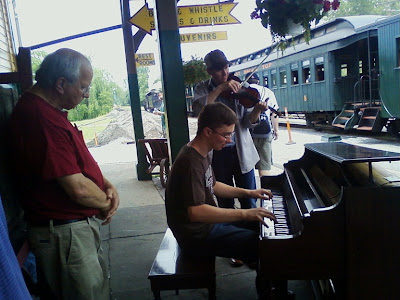 Here is Adam Swanson playing at the same outdoor event in Rockhill Furnace, Pa., today. Adam -- who is about 19 years old -- is the three time 1st place winner of the Old Time Piano Championship (and has been "retired" from that contest as a result).


Our actual stay at there was quite short given the layout and lack of any amenities, and we did not stay for the evening concert if only to avoid a super-late return home. Also, it was so uncomfortably humid at the outside venue at the railroad museum where it was held with flies buzzing about. And the old-time coal-fired train on display there kept riding back and forth in billowing clouds of nasty 19th Century-style smoke and the train whistle was so damn loud. 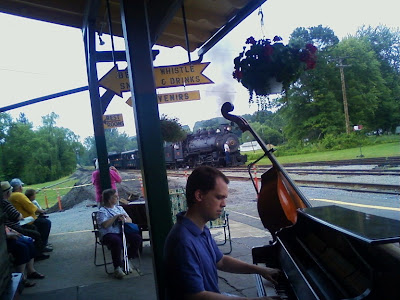 Here Bryan was finishing the mournful rag "Roberto Clemente" in honor of the late baseball player as the coal-fired locomotive in question thundered toward the museum depot to nowhere.


Bryan is an amazing young man -- such talent and so softly well-spoken and articulate. I learned of him while listening to the internet radio show "Soundstage" that he hosts on the BostonPete.com site, which I listen to at work. 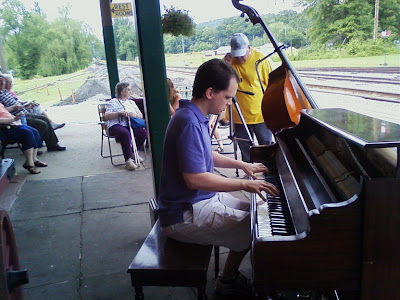 More more picture of Bryan playing the piano today a the outdoor event.


As noted, the event was held in Rockhill Furnace, which is a tiny town that is almost indistinguishable from the adjoining speck of a town called Orbisonia, and both extremely rural with the only vehicles really being large pick up trucks and the folks looking quite that part of America these days (overweight, sloppy and not really doing much of anything). 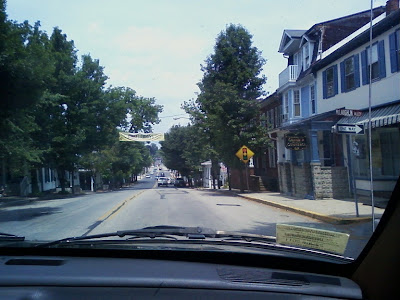 Historic Mercersburg, Pa., 1:03PM, June 18, 2011. This is one of the prettier towns we went through unlike some of the other more vapid and depressing ones.

Of note, this was taken along Rt. 16 after an unexpected but (given that we had no map and no idea where we were) a shockingly successful detour that brought us back to Rt. 16 on country roads and the backside of a small boarding school known as Mercersburg Academy.


OK, that's all for now. I'm now back in the hateful but familiar D.C. gay mother's ship, and Gary and I are going to Nellie's tonight. I think I'm meeting Quill tomorrow for lunch.

This entry ended up being a lot longer and more detailed than I anticipated. My next planned update will be either Monday or Tuesday night.