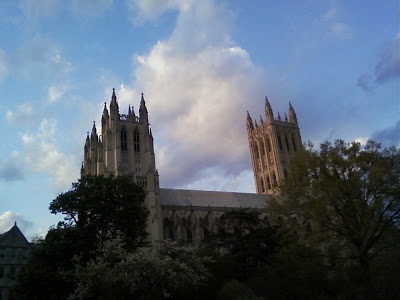 OK, I think I need to post a new entry to replace the previous excessively vitriolic one -- and despite the pretty pictures in it* -- since I am feeling badly that I wrote such content because (1) two of my friends are presently having a much more difficult time than I am; and (2) my work day was fine.
*Actually, I am reposting the same images plus others I took yesterday.
####### 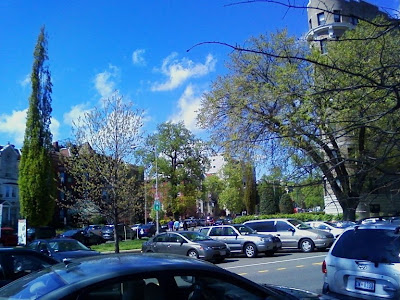 A nice spring Sunday afternoon under a rain-washed blue sky after a stormy Saturday as seen just outside my apartment building along New Hampshire Avenue by 16th Street, NW, Washington, D.C., 3:00PM, April 17, 2011.
#######

One very close friend of mine is in the hospital tonight due to an earlier heart-related scare. She is there overnight for observation but seems to be doing fine. My other friend is having a very difficult time with family, work, and a loved one who is dying.
As such, I feel as though it is wrong of me to be so vitriolic and hateful, especially when two close friends are genuinely having a difficult time. Well, for that matter, three are. Also, as noted before, my mom does occasionally read this blog ... 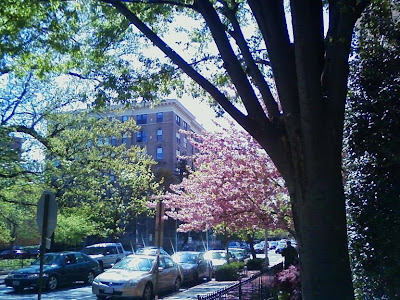 My day at work was actually good in that I drummed up two more assignments that should keep me busy for the time being. I also went to lunch with my supervisor and co-worker at Teaism. We walked across the tourist-thronged Mall to the Archives area where Teaism is located. 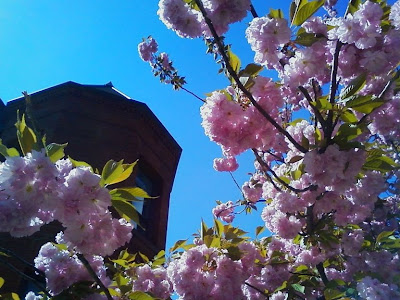 (Previously posted:) A double flowering Kwanzan cherry tree in full floral bloom at New Hampshire Ave. and S Street, NW, Washington, D.C., 3:11PM, April 17, 2011.
As I've noted before, the Kwanzan -- which is a mispronunciation of the Japanese word "kanzan" -- is another Japanese flowering cherry tree. It blooms about 2 weeks later than the ubiquitous Yoshino cherries, the signature tree of Washington in spring time. I like its blossoms more than the Yoshinos.
#######

It was a seasonably mild day (temps around 73F, about 5F above normal) under mostly cloudy skies. It is forecasted to be almost hot by Wednesday with temps reaching 85F or so, but with a chance of thunderstorms. I hope it is rainy and cool as forecasted for Friday and Friday night. 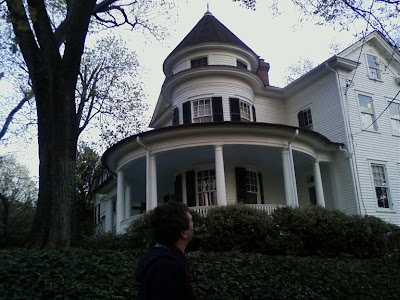 I'm home tonight flipping back and forth between The Golden Girls Monday night marathon on We TV and episodes of Frasier on Hallmark Channel. I'm actually not feeling that well, again, with a cloudy headache that's worrying me a bit. I purchased some generic Claritin (loratadine) earlier. 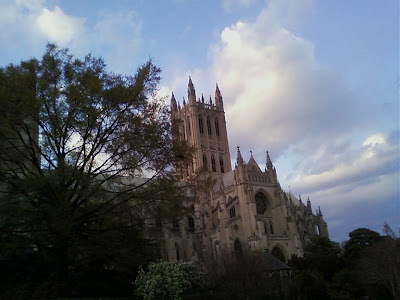 Below are a couple other pictures I took Saturday night (or rather, in the early hours of Sunday morning). 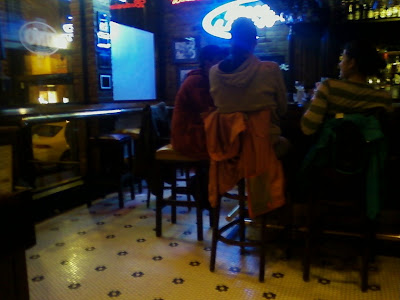 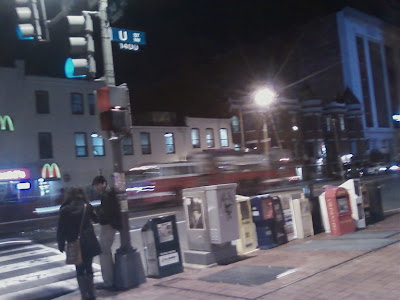 Oh, I should note that legendary Maryland political figure William Donald Schaefer has died at age 89. 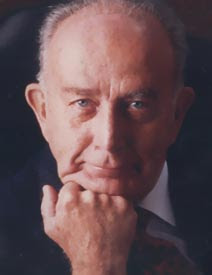 As such, I feel I should note his passing. It is so noted. 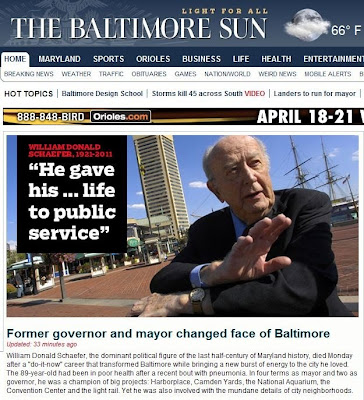 Screen shot of the Baltimore Sun online tonight.
HERE is his full Baltimore Sun obituary and here is the paper's memorial editorial to him. Both are definitely worth a read.

OK, that's all for now. My next planned update probably won't be until Wed. or Thursday.
--Regulus
Posted by Regulus at 8:10 PM

hope your friends are doing/feeling better!

i myself getting over either a flu or a mono flare up...

Thanks, Mike. I hope you feel better. Let me know when you're around in D.C.