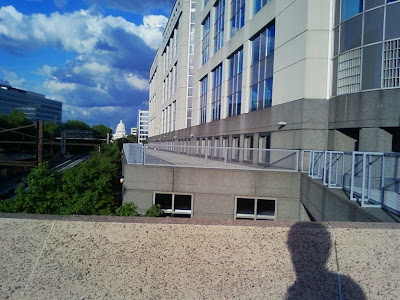 OK, I wasn't going to update this blog until the weekend, but I had to acknowledge the devastating and stunningly deadly tornadoes that ripped through five states, in particular Alabama on Wednesday, killing at 300 people (maybe more) and causing massive destruction in places. This is the worst tornado outbreak in terms of fatalities since the April 3 - 4, 1974 "Super Outbreak." 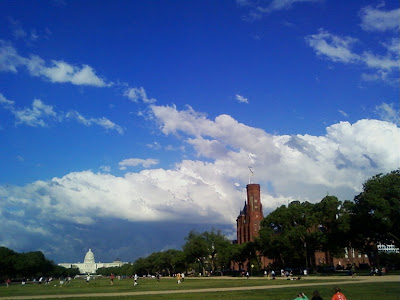 No stormy weather here: Another picture taken this sunny early evening as I walked across the National Mall with the U.S. Capitol in the distance, 6:53PM, April 28, 2011.
I walked home from work on a pleasant, sunny, windy April evening. I walk home maybe once every two weeks. It's a two mile jaunt back to U and 16th Streets, NW.
####### 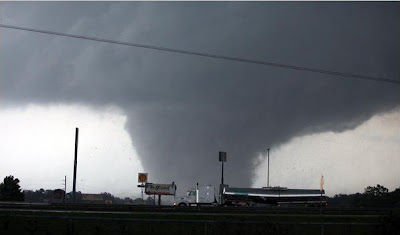 I felt it important to update this blog to note the devastating and startlingly deadly was this tornado outbreak -- now on par with the April 3 - 4, 1974 "Super Outbreak" in terms of numbers of twisters and fatalities. (FYI: I MAY have a dim memory at the age of 4, living in New Jersey, as the front passed through with powerful thunderstorms and talk of tornadoes in the air, so to speak.) 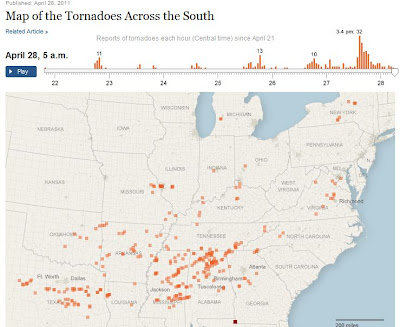 The map is actually linked from this New York Times article. (I'm nearing my 20 article per month limit to free articles under the NYT's online access policy. Fortunately, no, Thank GOD, this does not seem to apply to Paul Krugman's NYT-hosted blog.) 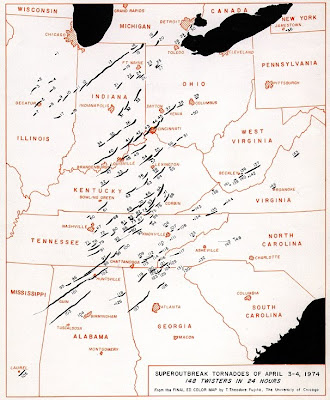 In the end, here in the Washington / Baltimore area had only scattered t-storms and officially almost no rain, although Dulles Airport managed to get over 1.5" of rain in two downpours. For updated precip total, see below at the frog rain gauge image. 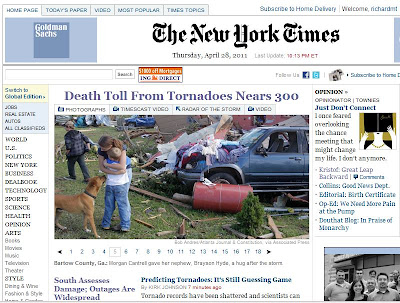 A paragraph in an Associated Press article captured the essence of how bewilderingly deadly this outbreak of tornadoes was across parts of the South. (Updated 8:35AM 4/29/2011: The wording of the paragraph was changed in the above link because of some idiot editor, but the original is below.)
"The death toll from Wednesday's storms seems out of a bygone era, before Doppler radar and pinpoint satellite forecasts were around to warn communities of severe weather. Residents were told the tornadoes were coming up to 24 minutes ahead of time, but they were just too wide, too powerful and too locked onto populated areas to avoid a horrifying body count."
#######
Some additional pictures of the devastation, in particular in Tuscaloosa, Alabama, that I found online (especially from The New York Times web pages) ... 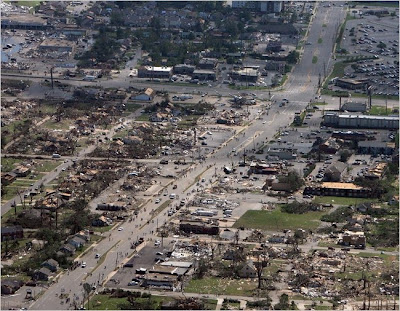 Aerial view of the devastation along 15th Street in the Cedar Crest and Forest Lake sections of Tuscaloosa, Ala., April 28, 2011 (the day after the tornadoes struck).
####### 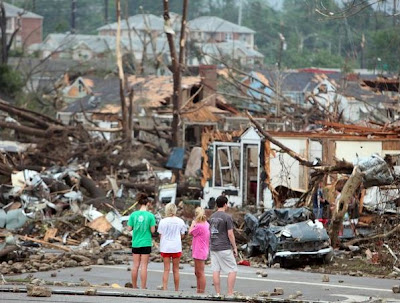 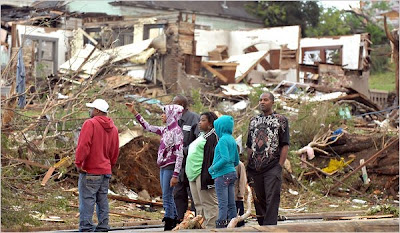 Residents of Pratt City just outside Birmingham, Ala., survey the damage left by the tornado that struck their community on April 27, 2011.
####### 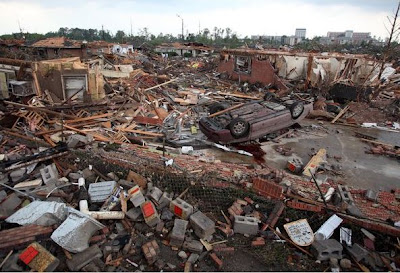 Another image of the complete destruction wrought by the Tuscaloosa, Ala., tornado on April 27, 2011. This surely must have been at least an EF4.
#######

Chase Spradlin comforts Judy Cook, whose home was destroyed in the tornado that struck Concord (west of Birmingham), Ala., on April 27, 2011.
#######

Glenda Dillshaw removes debris from her bed in her destroyed home, Pleasant Grove (near Birmingham), Ala., after the April 27, 2011 tornado.
#######

Some additional scenes from the same weather system ... 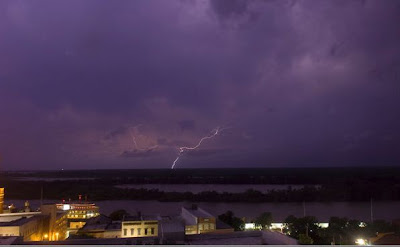 A lightning-laced violent thunderstorm at stormy dusk near Vicksburg, Miss., April 27, 2011. This was part of the same weather system that spawned the tornadic outbreak. 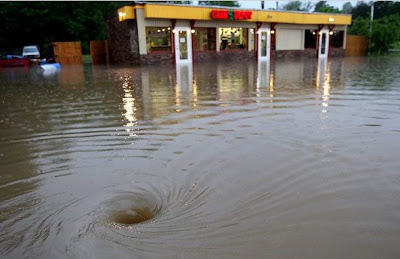 Flooding rains in Horn Lake, Miss., just south of Memphis, Tenn., outside a convenience store with an intriguing looking whirlpool.
####### 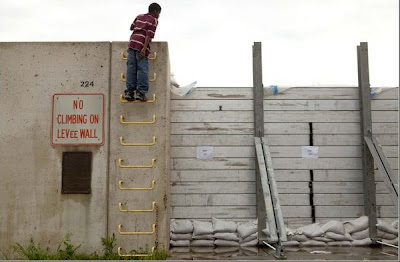 Here a young man climbs a levee wall in Cairo, Ill., to peer over at the cresting flood waters. The same weather system brought flooding rains to parts of the Midwest.
#######

As noted already, in the end, the Washington / Baltimore area didn't get that much rain at all, or rather it was quite scattered and missed the two of the three airport regional airport recording stations.
Here are the numbers valid through midnight April 29th (11:59PM April 28), 2011. 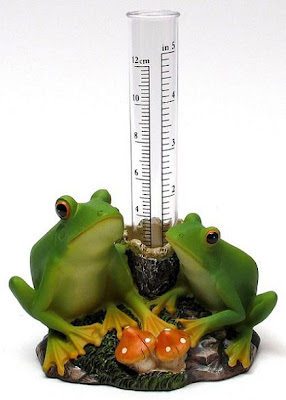 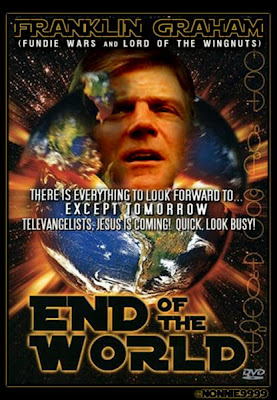 "The US's problems are real; there is a fork in the road. It took searing depression to break the self-delusion in the 1930s. It may take disaster again to disabuse the American majority of the idea that the motley crew – Palin, Trump, Murdoch and Fox News, Paul Ryan, US bankers and shock jocks – are not on the side of reason. Until then, beware. A superpower that has lost its grip on reality is very dangerous indeed."

-- Will Hutton (former editor-in-chief of The Observer) in an April 24, 2011 column in the UK Guardian

A fascinating article appeared on Yahoo finance news about the impending economic eclipse of the United States by China by 2016 based on on real economic data known as purchasing power parity (PPP). The author Brett Arend is a columnist for MarketWatch and the Wall Street Journal. He quoted a professor describing the difference between the Chinese and U.S. economic paradigms in place: 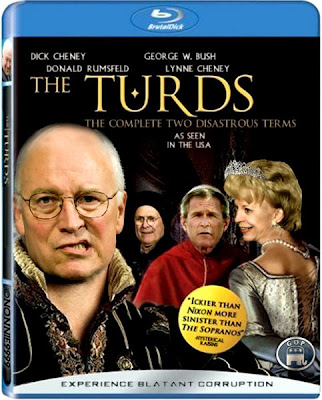 "'There are two systems in collision,' said Ralph Gomory, research professor at NYU's Stern business school. 'They have a state-guided form of capitalism, and we have a much freer former of capitalism.' What we have seen, he said, is 'a massive shift in capability from the U.S. to China. What we have done is traded jobs for profit. The jobs have moved to China. The capability erodes in the U.S. and grows in China. That's very destructive. That is a big reason why the U.S. is becoming more and more polarized between a small, very rich class and an eroding middle class. The people who get the profits are very different from the people who lost the wages.'"

I am repeating this because I want to add to that picture -- and speaking of the British, except it is a very different perspective -- the views of one Sebastian Mallaby.
Who is that?

Mallaby is a former Washington Post editorial writer (the unsigned pure shitty ones that represent the opinion of "the newspaper," i.e. the Graham Family Evil Empire) and columnist. 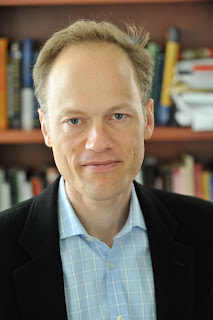 Mallaby is also a truly awful British Tory pseudo - intellectual and moral gigolo who long ago found a comfortable corporate brothel roost here in the Capital of the Empire.

Currently, he is ensconced in the Council on Foreign Relations (this is his mugshot from there)-- where he spends his days coming up with bogus intellectual justifications for whatever monstrous corporate crimes the ruling oligarchical overclass seeks to commit or is already committing with impunity, including whatever war of aggression the Empire is set to wage (as long as other poor peoples' kids go off to fight and be maimed or die in them). 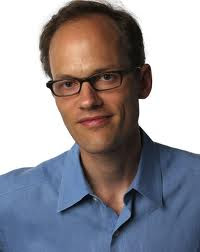 Here he was slightly younger when he was at The WaHoPo in the halcyonic 1990s.

It is here in D.C. that Mallaby and the rest of the elite D.C. pundit crowd engage in the daily circle jerk of neocon imperialism and (to my original point for mentioning him) "Free Trade" fundamentalism.

That term is ALWAYS just a code phrase for the most vicious form of destruction of the American economy into a tiny corporate oligarchical financial - information and entertainment overclass versus a debt-enslaved, no-benefits, just-drop-dead working "service economy" underclass (in the way that the Gomory quote above suggests).
In many ways, he IS the face of what was done -- in the name not of some Ayn Rand bullshit but of a "utopian" nightmare "post-historical free market borderless corporate capitalist" dystopia -- to the American nation and its working class in the past 50 years.
Mallaby, why don't you just go back to England and try to ruin everything there instead of here for a change.
####### 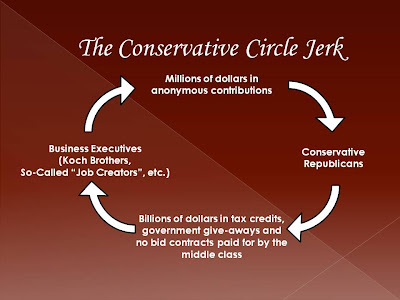 The diagram applies equally to the rightwing GOP crowd, or to the D.C. pundit Beltway Circle Jerk crowd.
#######

OK, that's about all for now. I won't be updating this blog in all likelihood until Monday. My weekend plans are indeterminate at this point but I'll recount whatever they are. I also have a dentist and doctor appointment on Monday. 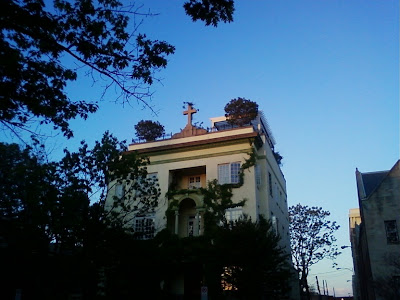 OK, that really is all. G'night.