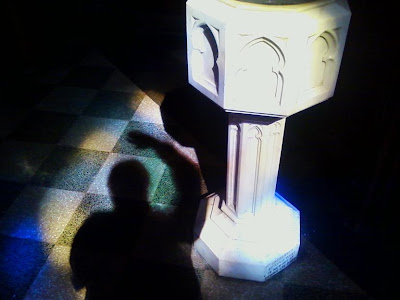 The shadow of Yours Truly next to an old baptismal font at St. Dominic Catholic Church in a lost and seemingly (but not entirely) soulless section of Southwest Washington, D.C., 1:23PM, March 2, 2011.

OK, so my recovery disk has arrived for my home computer and I'm hoping that Gerry can get everything fixed tonight. That means this should be my last entry NOT posted from home. In this entry I mostly just wanted to post some pictures and links to some interesting articles. 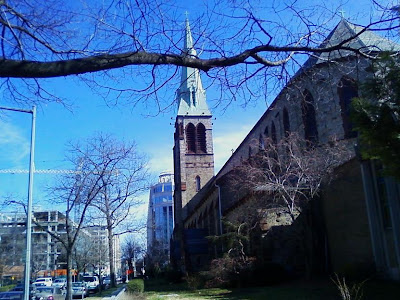 The exterior of St. Dominic Catholic Church with its soaring copper green-oxidized spire along side I-395 at the edge of Southwest Washington, D.C., 1:15PM, March 2, 2011.

On rare occasions (as I did today) I walk over there at lunch time because it is so peaceful inside.

Again, I will refrain from any political diatribes since I'm not posting this from home. I will say that this morning was particularly egregious in terms of newspaper headlines, especially POLITICO, the distilled nihilistic essence of everything wrong with horse trading insider journalism where the playing field is always rigged for the GOP to win (it's the worst of The Washington Post / "Meet the Press" political reporting where Republican politicians are always running amok, corporate power is forever increasing unchecked, the public is completely clueless, and Dems are forever "in disarray", and the world is reduced to a truly ugly Amoral Flatland). 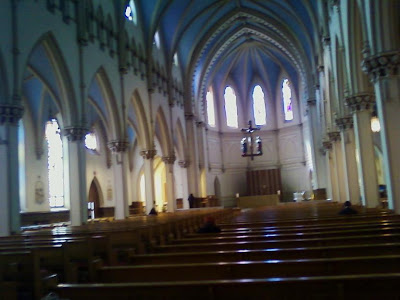 Everytime I'm there I think of that Golden Girls line where Sophia -- on her way to bingo at church -- says, "Now if you'll excuse me, there's a weed wacker at St. Dominic's with my name on it!"

Anyway, in this entry I will discuss / link to some interesting articles from The New York Times.

The New York Times Magazine has a nearly 8,300 word conversation-stopper about the life of Lori Berenson focusing on her difficult life in Peru following her 15 years imprisonment in an isolated prison high in the Andes Mountains, as she raises a young son in Lima as a single mom and waits the remaining 5 years on parole before she can finally get the hell out of Peru and return to the U.S. 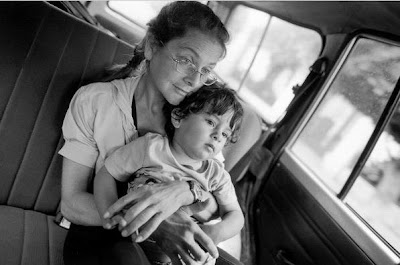 Here is a picture of Lori Berenson with her son taken recently in Lima.

For her role -- whatever it actually amounted to -- in helping the Maoist Shining Path guerrillas, not only has she lost any normal life she ever would have had but she is widely and venomously despised by many Peruvians. 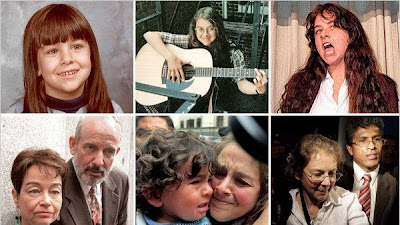 Here is a montage of images of Lori, her parents, her son (Salvadore), her lawyer, and the father of her son. The most troubling one is the top right one -- taken upon her conviction in 1996 by a hooded tribunal when she started screaming at the assembled reporters. Well do I remember that image in a Washington Post Style section article that had a headline to the effect "far away from home in VERY BIG trouble". 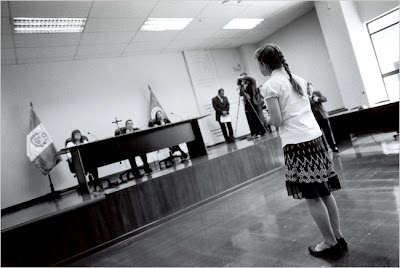 Here she is at one of per periodic parole hearings in Jan. 2011. She could be sent back to prison to finish out her term at any time. 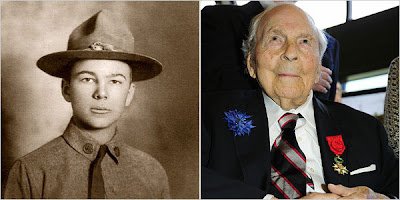 Frank Buckles, the last known American World War I veteran (or "Doughboy") has died at the age of 110. Buckles, born Feb. 1, 1901* in Bethany, Missouri, lied about his age to enlist in Aug. 1917. He made it to France but never actually saw combat.

I had actually thought the last American WWI vet had died a few years ago (I distinctly remember stories about that but I can't recall the name). Perhaps that was the last combat WWI vet.

There are now only two known World War I survivors remaining in the world. Quoting from the New York Times article: "Claude Choules, who served in Britain’s Royal Navy and now lives in Australia, and Florence Green, a member of Britain’s Women’s Royal Air Force and who lives in England, are thought to be the only two people still living who served in any capacity in the war."

*If he had been born 32 days earlier on Dec. 31, 1900, he would have technically been in the 19th Century (since centuries begin on the "01" year since -- ALL TOGETHER NOW -- THERE WAS NO YEAR ZERO!) and his life would touched THREE centuries. (Come to think of it, he was at least ALIVE inside his mother for over half of the year 1900.) 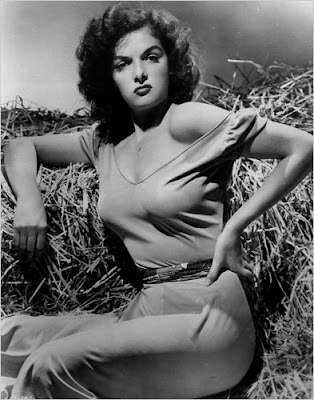 As if on cue linking World War I's last surviving Doughboy and one of the great and glamorous World War II era Hollywood stars, Jane Russell has died at age 89. 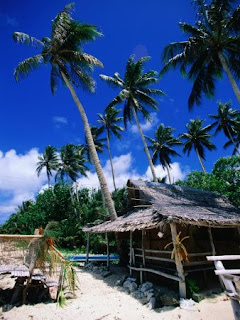 ... and was killed at the Battle of Midway in June 1942, or somewhere in the South Pacific around that time. I was gay then, too, only that concept really didn't exist then per se and it didn't define a whole existence.

And, as it were, it worked out well a few times on some stunning South Pacific beach (or maybe on the deck of a destroyer) beneath the vast and wonderful night sky of the tropical latitudes near or just below the Equator ... Canopus, the Magellanic Clouds, Vela, the Southern Cross ...

Told you it was romantic and silly.

So what did I do that was so bad to end up in such a vicious and empty time as Washington, D.C., early 21st Century??

Wait, we're not going to go down that road right now. 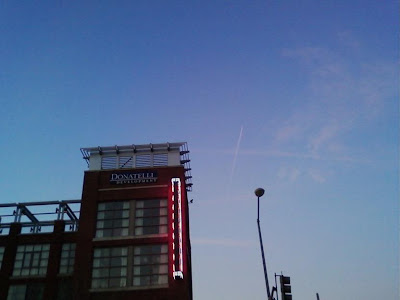 I took this picture because a high-flying passenger jet still bathed in an eerie orange sunlight from the Sun (which was already set from the ground) was about to cross nearly over Washington, D.C., on a somewhat unusual path. Typically, these jets go northeast - southwest and pass about 20 miles to the NW of the city on a well-traveled jet route.

A few minutes later, I watched from 14th and U as the contrail from the receding jet approaching (or rather, from my perspective appearing to approach) the star Sirius -- visible already in the deepening gray blue dusk off to the southeast. Sirius is prominently visible shortly after nightfall this time of year. 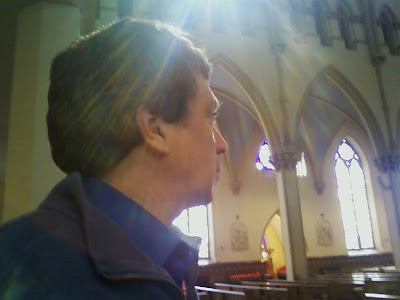 Yours truly at St. Dominic Catholic Church in a strange part of Southwest Washington, D.C. on my lunch break, 1:22PM, March 2, 2011

OK, I think that's all for now. I really hope my next update will be from my functional home computer.

thanks for the link to the lori berenson article. i remember that story.

ps. how come no mention of gorbachev's 80th birthday?

Actually, Kristof sent me a picture of Gorbachev smooching the late East German leader Erich Honecker ... That must have been the reason he sent it.

To your question, though, I didn't realize Gorbachev had just turned 80. Do you remember how badly his wife and Nancy Reagan got on. Nancy referred to her as "that dame" or something like that. Good times back then.

Kristof -- Do you have Mike G's email? He would appreciate that picture.

I think that picture must have been inspired by the Dmitri Vrubel painting of Honecker kissing Brezhnev that way as well. It is on Honecker's Wikipedia article. Direct link here.

Are you sure it wasn't Photoshopped?

krzysztof did send me the picture...

also, painting brezhnev's frenching anybody within his reach did not require anyone else's (gorbachev and honecker especially) action.

he was and still is the macdaddy of political leader french fest.

Oh, dear, you are correct ... I didn't realize that Kristof had put you on that email list. Sometimes I am hopelessly unobservant.

I didn't realize that about Brezhnev. He was a strange character.

On another topic, when are you coming into D.C. so we can meet? I don't want to wait 6 to 12+ months like we've been doing, but I realize you aren't here and free that often. I'd like to talk ... I'd also like to complain about a certain Gay Mafioso and show you my letters. I'm curious what you think. I realize nothing may come of them but we will see.

i might be in dc at the rfk stadium on march, 12th for the shamrock fest... yes, i am secretly and so very distantly irish. not.

a buddy of mine from our soccer team is running a gaelic football team which plays in a tournament at the event, so i might go and play.