Neither a Teenage Dream Nor Much D.C. January Glee (though a bit of history) 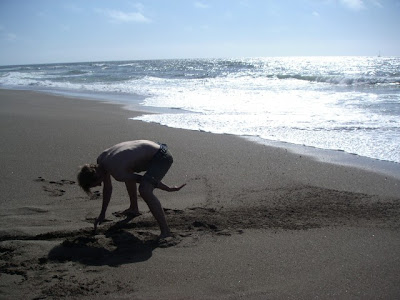 This is an image of a person (a young man) digging in the sand at Point Reyes National Seashore, Calif., that I found online four or five years ago. I've posted it occasionally on my various blogs over the years. I've always loved this picture. I don't know where I found it but it was taken by someone identified as Polvi.
#######

I need to update this blog -- and it feels more like a chore than anything else -- if not for my few remaining readers / random Google image searchers, than for myself. 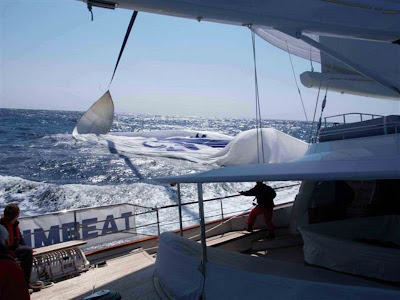 This is another image -- sailing on the open ocean on a sunny, windy day -- that I absolutely love that I found four or five years ago online and have occasionally posted on my various blogs.
#######

Neither of those two images are what I see from my 5th floor apartment somewhere in Washington, D.C., right now.
It is kind of a blah and vapid mid-January day, air temp. about 40F with a high overcast and the world looks suitably dull. 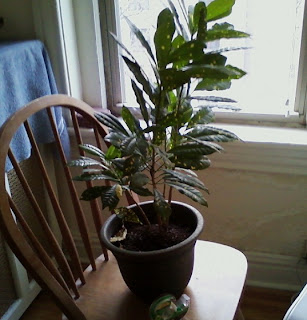 A picture of my Gold Dust Croton plant (at least I think that's what it is). It has gotten quite large.

I've had to repot it twice.I'm getting such a late start that I probably will not make it to the Phillips Collection -- it would be my unprecedented second Sunday in a row -- even though today is apparently an open house to celebrate the place's 90th anniversary. I went last week, as I wrote about in my previous entry.

My only achievement so far today is to do two loads of laundry.

Monday is the Martin Luther King, Jr. Federal holiday and I have the day off.

Last night I was at Omega with Kristof and LP. While it wasn't a particularly memorable, or even fun night, I happened to see an extended version of the following scene from the TV show Glee -- which I've never actually watched.
It's a strange musical number that is a kind of hybrid sprawling version of a barber shop quartet / boy band rendition of Katy Perry's Teenage Dream with an overtly gay theme. As a 41 year old gay man, I find it rather confusing, if nothing else because I don't know the plot line back story to it. Nevertheless, I kinda like it and so I'm posting it.
So far, I've done basically nothing this weekend except go out to Cobalt, Larry's Lounge, and Omega at night. Yes, it's rather depressing. I'm in a deep, year's long rut. Or may, shockingly, this is all my life ever will be -- at least while I'm here in D.C.
#######

Speaking of D.C., what follows is a modified reposting of my current Arcturus blog entry. I was in a better mood when I posted it than I am now. I've previously posted similar themed content regarding the history of D.C. on my blogs, so some of this is just repeated stuff. 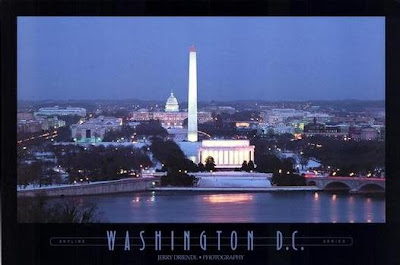 A postcard picture of Washington, D.C.'s iconic structures -- the Lincoln Memorial, the Washington Monument, and the U.S. Capitol Building as seen across the Potomac River on the Virginia side at winter dusk (with snow on the ground)
####### 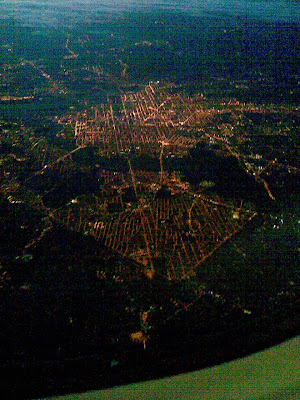 Although the resolution is blurry, this is a rather stunning picture that Gary took from his window seat on ascent from National Airport looking across Washington, D.C., from about 10,000 feet at dusk on Jan. 14, 2011.

The vantage point is looking west across D.C. from its easternmost tip and toward Virginia.
Weirdly illuminated Eastern and Southern Avenues come almost to a "point" by the East Cornerstone while the city's east-west lettered streets mostly dead end at them.
The brighest east-west running street just south of the East Cornerstone is East Capitol Street.*
You can also see the Potomac and Anacostia Rivers with two bridges -- to the left, the John Philip Sousa Bridge carrying Pennsylvania Ave., and to the right, the Benning Bridge that carrying Benning Road -- over the latter. 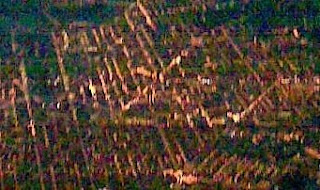 Here is the -- blurry -- close up of downtown Washington, D.C., from the same image. Dupont Circle is actually visible just above the center of the picture, as is the Washington Monument (very blurry on the dark part of the National Mall, upper left), while off to the lower right, is the (ghetto-y) Trinidad section of D.C. where all the streets run at an angle to the regular numbered / lettered streets of the rest of the city (excluding the state-named diagonal ones that criss-cross the district). 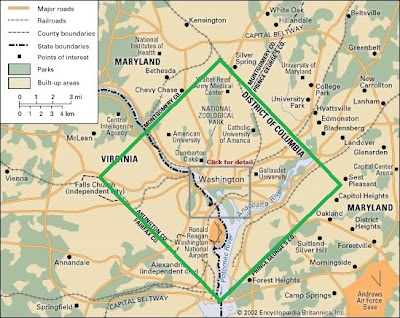 *(From above): This indicates that the city's directional quadrants are not geographically uniform. The actual geographic center point of the original 10 mile by 10 mile Federal Territory that includes Arlington, Co., and part of Alexandria, Va., is an unmarked spot on the grounds of the Organization of American States near the White House. 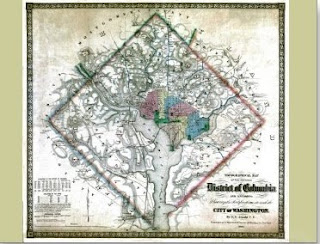 An 1862 map of the Federal Territory -- after the Virginia portion had been "retroceded" back to Virginia in 1846 but before the Organic Act of the District of Columbia of 1871 that unified the City of Washington, Georgetown, and Washington County into a single entity, the District of Columbia. (The retrocession itself may have been unconstitutional, but it is, obviously, a done deal.) 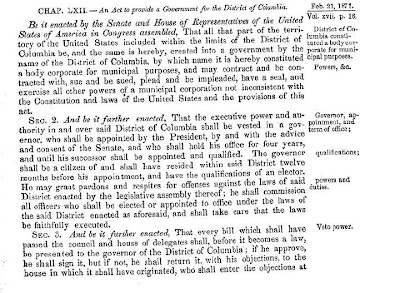 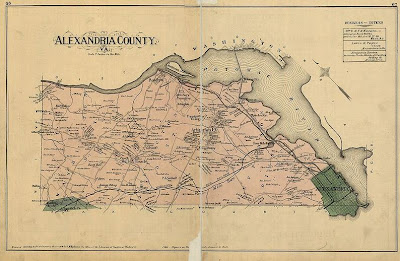 Here is an 1878 map of the Alexandria County -- later renamed Arlington County -- 32 years after after it had been retroceded back to Virginia. A much higher resolution of this available on Wikipedia here (you may need to click on the image to get the larger version).
####### 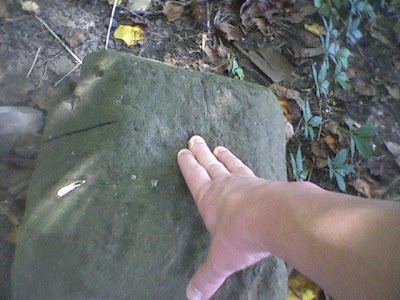 The North Cornerstone of the District of Columbia being touched by Yours Truly, July 25, 2009 (ignore the bird crap on the stone).
#######

And somewhere lost in the District of Columbia at night in a shower of street light ... 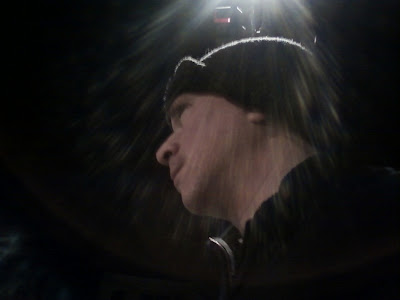 Speaking of Yours Truly, I've become so flabby and practically fat. It's very unpleasant. I feel either like a hippo ... 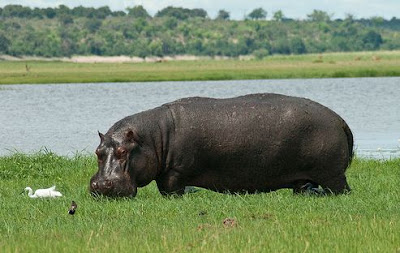 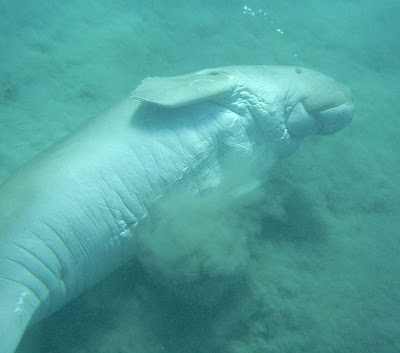 ... frolicking in the warm, sunlit waters off Egypt.
Except I don't ever really frolic. The only solution to my to my weight and physique is to go on some awful drastic diet, never drink, and go to the gym daily and spend a depressing hour on the treadmill. Yet my D.C. life is depressing enough that I don't feel like doing that. At least not yet.
####### 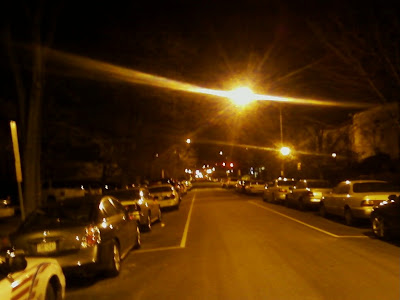 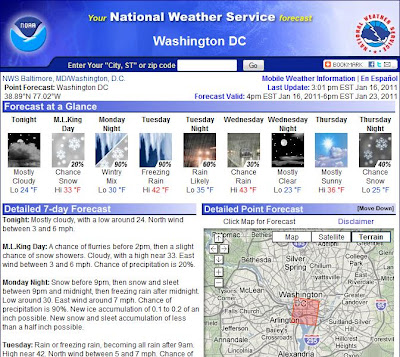 The current NWS forecast for Washington, D.C. for this upcoming week. It looks a lot more dire than it really will turn out to be. Most of that freezing stuff will be quite light. We actually need a good soaking of rain more than anything.
Beyond the above panel, there is a lot of weather uncertainty for late week and next weekend as to whether there will be a full-fledged coastal storm. It will certainly be cold enough for snow by then.
#######

Spooky red back exit to a blue place ... 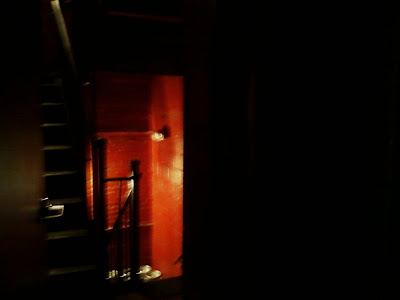 An unplanned bit o' political commentary ...
It was not my intention to post ANY political commentary in this current entry -- and instead just save that for a future entry. However, I do think Frank Rich's New York Times column about the political climate that contributed to the assassination attempt on Rep. Gabby Giffords in which 5 were killed is worth a read.

Rich gets it just right -- and knocks down the patently absurd idea that the level of rhetorical violence has been the same on both the right and left in this country in recent years. 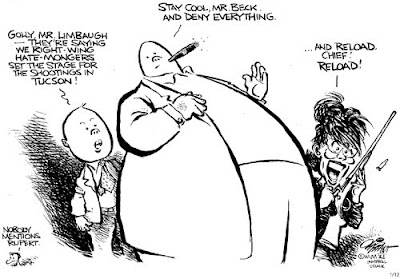 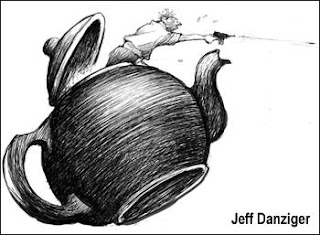 This is a meme pushed (as you'd expect) by the carnival barking propagandists of the right, but even some people in surprising places -- such as that jackass Steve Kornacki of Salon -- have argued there is no relationship whatsoever between the political climate and the actions of crazies such as Jared Lee Loughner.

Kornacki is a political reporter -- and like most jackass political reporters who cover the American political scene (think Chuck Todd) they see the world in fairly amoral terms wherein everything is just horse-trading and positioning and there are no actual meaningful or absolute standards of right and wrong, and they are incapable of seeing otherwise.
In addition, there is a powerful mainstream corporate media narrative to pretend that there is a phony equivalency between the two sides when that is, prima facie, bullshit. 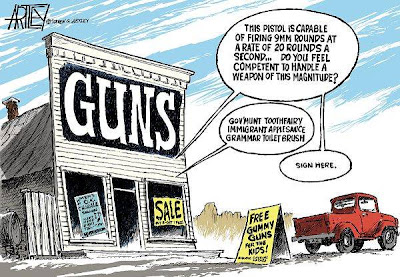 This is a brilliant cartoon -- click on it for larger version.
The only good news to come out of this horrible tragedy is that Sarah Palin -- a Frankensteinian modern day "reality TV world" hybrid of P.T. Barnum, William Jennings Bryan (minus the intellect), Huey Long, a mid-19th Century "Know Nothing", and Oprah -- has been powerfully undercut. 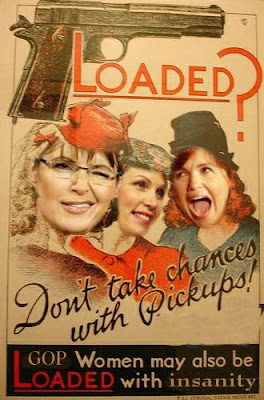 Virtually ALL of her rhetoric is steeped in violent imagery involving insurrection and regular use of firearms to achieve any and all purposes -- including, politically, some amorphous bullshit libertarian "freedom from tyranny" (though, ironically, to follow her path would be to speed up a rightwing American - style fascism).

OK, I guess I did introduce some political commentary here. My apologies.
My next planned update (assuming nothing bad happens to me) will be mid-week.
--Regulus
Posted by Regulus at 1:06 PM

My next planned update (assuming nothing bad happens to me) will be mid-week.
HaHa, now that is funny! As Alf says, "You Kill me." ;)

How am I? Eh, OK, I guess. I need to give you a call to see how you are doing. I'm sorry that we have so fallen out of touch. It's my fault.