A Brief Snowy Tuesday Night and Works of Sunday Art 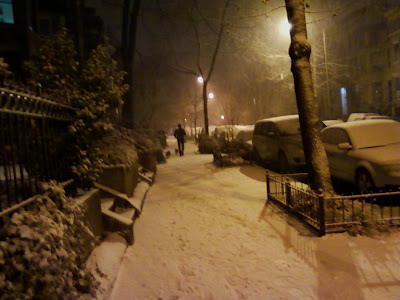 I've opted to not write the entry I had planned. It was my own commentary on President Obama's speech at the Tucson Memorial tonight for the victims of the mass shooting on Saturday in the assassination attempt on Rep. Gabrielle "Gabby" Giffords (D - Ariz). 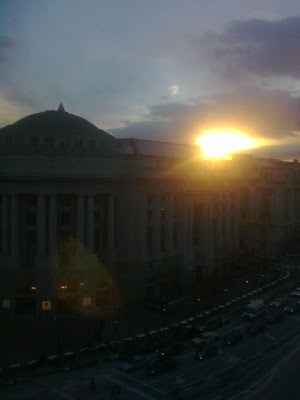 Chris T. early today took another one of his sunset pictures from his office just off Pennsylvania Avenue in downtown Washington, D.C.

However, it would take too long to write everything out, and more generally, I'm just finding it very difficult to keep up this blog, esp. since I am keeping up another one -- plus I am having a very busy week. I basically need 6 hours uninterrupted to write one of these entries. My apologies.

As it is -- except for the Usual Suspects -- my blog readership among my regular readers is way down. 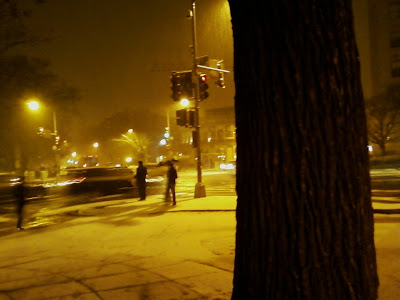 The next set of pictures were taken by me with my low-quality cellphone camera at the Phillips Milk of Magnesia Collection here in D.C. (only my second ever visit to that place). I went there with LP to see a separate exhibit but the Side by Side exhibit featuring 25 works from the Oberlin College collection was the one I really enjoyed. 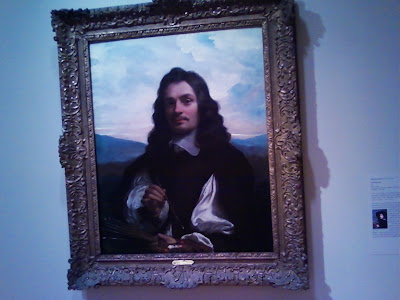 Michiel Sweerts' Self-Portrait, ca. 1656 - 1658, as it appeared at the Phillips Collection, Washington, D.C., 5:46PM, Jan. 9, 2011.
This picture (with a vaguely Mona Lisa feel and similar ethereal landscaped setting ) and the other three posted in here really captivated me. It was so weird looking into the eyes of a person who lived 350+ years ago, yet he appeared so modern, as if he were alive right now (and had just shampooed and conditioned his long hair!). And the painting (like the others) was in such good condition.
####### 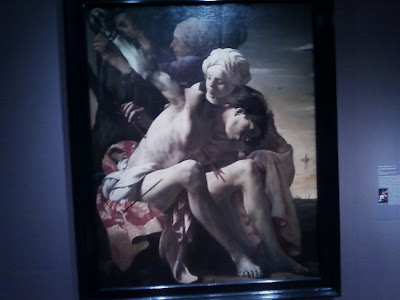 Saint Sebastian Tended by Irene by Hendrick ter Brugghen (1625), as it appeared at the Phillips Collection, Washington, D.C., 5:47PM, Jan. 9, 2011.
This was an amazing work. You can read about it here. 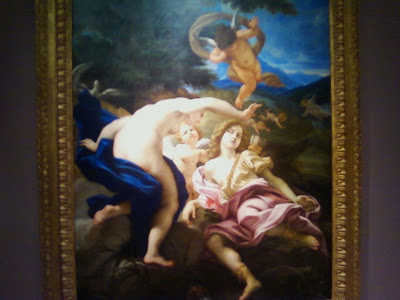 And here is what is arguably the Phillips Collection's most famous of its permanent works of art ... 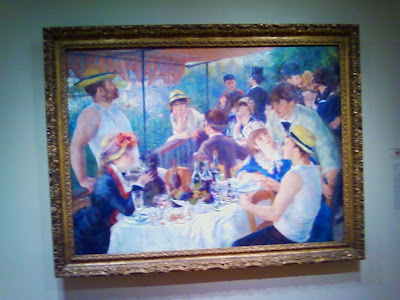 So in the end, there was about 1 to 2 inches of snow area wide. There was 1.0" at DCA, 2.0" at BWI, and 1.2" at IAD. Officially.
There isn't any more snow forthcoming and if anything it should warm up finally and there is a chance of (needed) rain on Monday (which I have off as it is the MLK Jr. Federal holiday). Despite the warm up, I wanted to post this close up of one panel in the 12Z GFS model run from today. 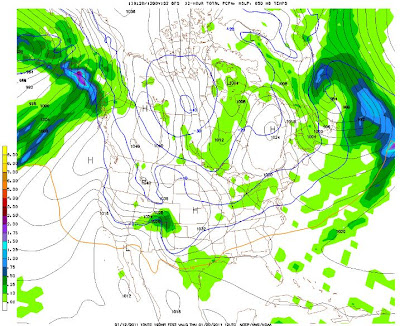 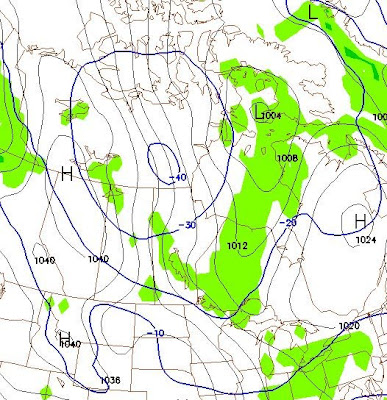 This is a close up of part of the map domain showed above (same time frame ), specifically, the northern U.S. and central and northern Canada. It shows the winter time polar vortex itself having COMPLETELY "sloshed off" the North Pole / high Arctic region and has "slipped" way south into Canada -- and actually approaching the Lower 48. The -30C and rarely seen -40C isotherms at 850mb mark the boundaries of the polar vortex.
In the later hours (hrs 216 - 252), the vortex actually crosses New England. The -20C isotherm is south of D.C. -- meaning low temps. of about 0F.
Now this may very well not happen (it wasn't nearly so dramatic in the 18UTC run). However, the -40C isotherm RARELY shows up in this way and in the context of the polar vortex so displaced off the North Pole / high Arctic. (The GFS is a 16-day model but anything beyond day 7 really can only show general trends and after 12 days is mostly useless.)
Having the polar vortex on "this side" of the Northern Hemisphere also means that Siberia is probably well above normal temp-wise.
OK, that's all for now. I really need to go to bed. My work week has actually been busy redacting emails from FOIA requests and making a list of solar PV cell and module manufacturers.
--Regulus
Posted by Regulus at 8:48 PM

When I was 14 that Renoir was my favourite painting, and I drew a detailed picture of the little dog and the girl holding it.
You must go there more often!!

Well, so have need of rain. I only wish I could send you some of OUR effing rain. Its a joke, ten years of none, and then the whole lot at once.
Cruel.

It's weird -- I so want to visit Australia, including Sydney, and to experience the ocean the way you do in such a far away place. And yet, conversely, the very painting that so moved you is literally less than 2500 feet (830m or so) from where I now sit, there in the Phillips Collection ... although you have to pay $12 a pop to see it ... which is why I never actually saw it before. You see, living in D.C., where museums are free, you mostly take it for granted that you don't have to PAY to go there!

As for rain, yes, I am aware that Australia was in a drought of such ferocity and duration that it seemed as though that was the natural climate ... and now, all of a sudden, it seems as though Australia is being drowned.

Having said that, I found this site from the Australian Bureau of Meteorology for Sydney (for a place called "Observatory Hill" -- do you know it?). I was trying to determine how the average precipitation has changed there in each 30-year period (click on the "period" toggle bar that says as the default "use all years" but can be adjusted to 30-year increments).

yes, observatory hill is just at the foot of the bridge...

And it is indeed a funny thing that there you are right next to that Renoir...it never occurred to me it was there. So there you are!

I am going to Japan in about 48 hours...so I will be in the snow too, in the northern hemisphere.


As for that rain average, yes, the average must somehow absorb the fat that in the last ten years, before this current cycle of endless rain, this country was a totally dried up scab upon the earth, as dry and rainless as could be. It shaped my life, my childrens lives, and now...this....

oh and by the way, I often use the BOM site (lol)
to check exactly where the rain is, if you go to the homepage and choose radar, you will see.

What a marvelously descriptive and poetic sentence. I hope you don't mind if I rewrite it

"... before this current cycle of endless rain, this country was a totally dried up scab upon the earth, as dry and rainless as could be. It shaped my life, my childrens lives, and now ... this ..."

Now why are you going to Hokkaido?? If I ever went to Japan, that's where I would want to go, not to Tokyo.

I really hope DG takes you up on your offer to meet him in February. It looks like he is getting a good feel for the country, even if it is in an unusually wet condition.

its the mouldiest, shittiest, wettest summer ever, but I suppose I should be grateful that it isnt 42 C and birds arent dropping dead in the skies like two years ago.

I am skiing in Hokkaido, and then having a poke around Tokyo. My husband and childre are mad keen skiers, I'm probably way past my use by date as far as skiing goes.


has it ever occurred to you that in real life I am quite uninteresting?? LOL

"has it ever occurred to you that in real life I am quite uninteresting??"

The truth?? The short answer is NO. And the long, complicated answer is also NO!!