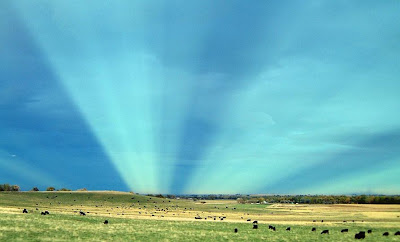 These are anti-crepuscular rays from the Sun below the horizon as seen from a car passing a rolling field filled with cattle outside Boulder, Colorado in 2001. This was the Nov. 28, 2010 APOD. Such rays are sometimes called the Rays (or Fingers) of Buddha, among other names. 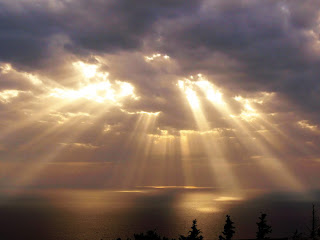 By contrast, crepuscular rays -- pictured here over the Ionian Sea near Lefkas, Greece -- have a more suggestive poetic name of Jacob's Ladder.

Let's see if this is the 4th consecutive entry in a row with 0 comments.

I appear to have lost at least two readers, one over the definitive end of any interaction or relationship with P. (that's P-dot in case you're wondering), and the other over my criticisms of Pres. Obama done Cave-In. Wow -- the latter is just breathtaking to watch. 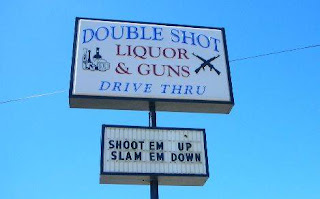 All while the GOP crazies run amok in a distraction created by the Overclass as it plunders and destroys America.

Yes, this place really does exist in Schulenburg, Texas, although the sign message may have been photoshopped in.

Anyway, I'm much too tired to write any kind of blog entry tonight, even a weather update to discuss the interesting and dramatic weather we had earlier today. 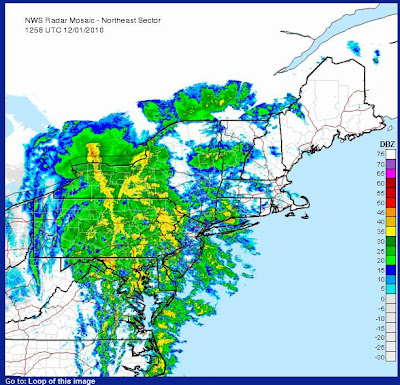 I've also been suffering from some real pains that I'm hoping is "just" the occasional acid reflux problems I have rather than prelude to a heart attack. Plus I have a headache. I'm not feeling well at all. Maybe I'm going to die. I really need a check up.
As for my job, it is going fine this week.

I'll try to update this blog tomorrow but realistically it may not be until the weekend.
--Regulus
Posted by Regulus at 10:21 PM

Here's a comment.
I wish I could write something longer but I'm busy doing like a 1000 different things at the same time

I'm sorry that you aren't physically feeling well, but it sounds like things are good at your job. You say, "it is going fine this week," so when I multiply by the Regulus-factor I get, "work is spectacular!" I'll go with that.

I'm very interested to hear about / see pictures from your New Zealand trip. As you may know, that is sorta where I would love to move!