I planned a very vitrolic and bitter entry over the blizzard we MISSED TOTALLY ... 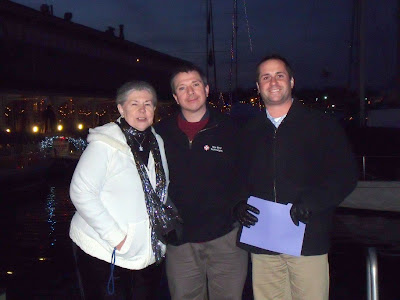 However, since my mom and others read this blog, and given what a delightful set of comments Fifi posted in my last entry, I'm just going to post a few pictures, including three more from my Christmas Eve dinner at the Chart House in Annapolis, Md., such as the above one of her, myself, and Gary outside the restaurant.
Ray took all three images.

While I won't post my vitrolic entry, I will write a little bit of what I intended. The topic is the East Coast blizzard that struck from the Delmarva to coastal Maine.

First, we didn't get squat in terms of snow here in Washington, D.C. -- both in the District of Columbia and the larger Baltimore / Washington area, or however the hell the Census Bureau refers to this region. 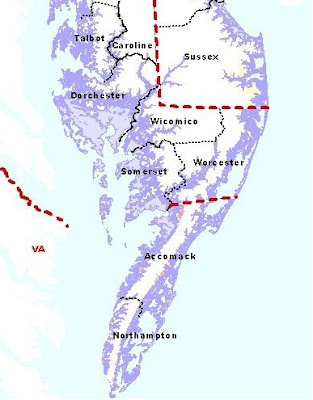 We actually had a situation where even frickin' Northampton and Accomack Counties, Virginia were under blizzard warnings while D.C. had NO advisories.

This storm was similar to the Feb. 1978 blizzard that I experienced in New Jersey at age 8.

A similar amount fell in coastal Monmouth County including Long Branch, on the order of 20 to 25 inches while D.C. got very little. Actually, in that storm I think DCA received about 2 inches, which was more than in this case.
This time, I don't even think there was measurable snowfall at DCA, and even if there was, I don't give a damn the actual amount. 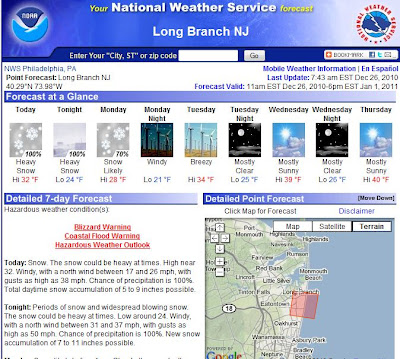 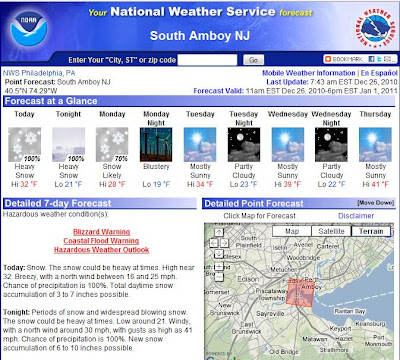 I'm very pissed off and unhappy about this, and I had a very cranky and bitter entry planned. In particular, I wanted to relate why I can't stand Sterling LWX (that's the Baltimore / Washington NWS Forecast Office) and how they embody Washington, D.C.'s "official culture" -- arrogant, self-righteous, highly legalistic, and "never wrong." They're the equivalent of The Washington Post Editorial Board in a number of ways. 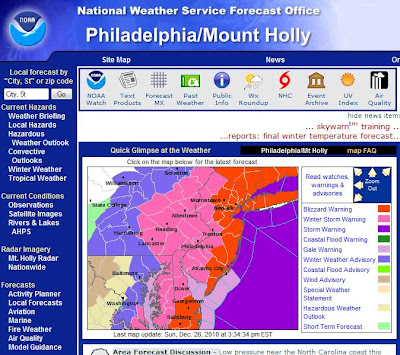 The Mt. Holly / Philadelphia NWS County Warning Area (CWA) Webpage as it appeared at 3:34PM Dec. 26, 2010. The adjacent CWAs -- including Sterling's -- is visible. This was shortly after Sterling LWX had eagerly and with much titillation and glee dropped even the winter weather advisory for the District of Columbia.
####### 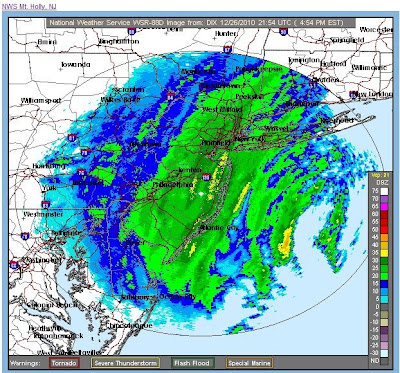 The NWS radar at Fort Dix, N.J.("DIX" -- not to be confused with the NWS radar at Dover AFB that is known by its three-letter abbreviation "DOX") in standard reflectivity mode, 4:51PM, Dec. 26, 2010. This was as the storm was nearing peak intensity and the central low was located off the Jersey coast by about 75 to 100 miles.
DIX-DOX.

Anyway, I just don't want to be in D.C. anymore. I'm so stuck here and it's such an unhappy and isolating place for me ... living in such a tiny and isolating bubble (the 17th Street gayborhood) as I do ... here in center of the Imperial Capital of this late stage, badly fraying, and increasingly corporatist, oligarchical, militaristic and surveillance-obsessed, declining Empire.
I'm sure that above sentence will end up being "content analyzed" at some "fusion center". Good.
####### 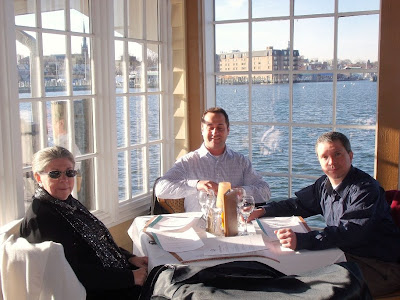 My mom (left), Gary (center), and myself (right). We had just sat down but the Sun was shining so brightly that I traded places with my mom, who had sunglasses. Yes, Gary's eyes are closed but I happened to like this picture so I posted it anyway. 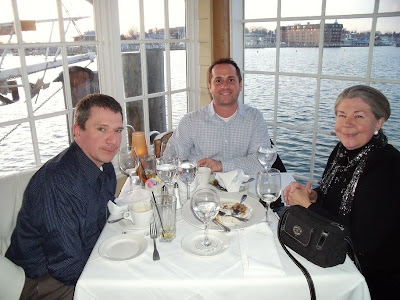 Anyway, this stupid episode was on par with other huge snowless disappointments here over the years including a New Years Eve one some years ago (can't recall what year and I don't feel like researching it). What is so frustrating is to invest a full 7 days of time and emotional energy in this -- all the worse in that it was at Christmas time, with its hope / promise of a "white Christmas" -- including viewing all the models and radar all to have it turn to shit.

GOD is delighted, though, or at least "pleased" because someone somewhere is upset. 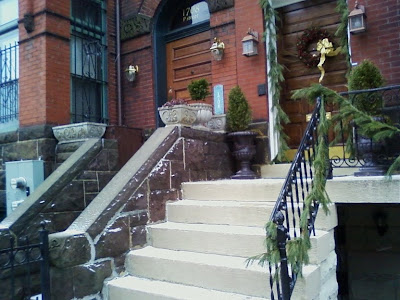 There are TWO bits of good news from this whole shitty event ...

First, with no snow, there's no need to watch it turn into a gloppy, disgusting, difficult to navigate mess here in the city as it melts away ... 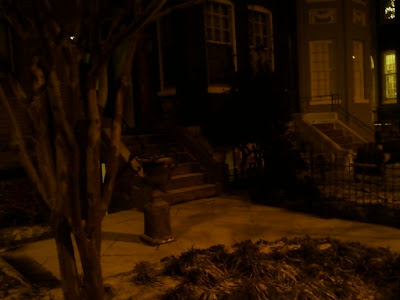 Secondly, the weather is going to warm up and there isn't ANY chance of another frickin' snowstorm / similar weather system for at least 10 days (through the realistic forecast period), but instead the pattern is going to change to a warmer one. If anything falls, it will be rain, and that's fine with me. 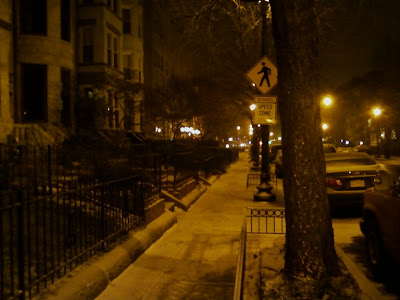 While I am NOT posting ANY blizzard pictures in the actual affected areas from the Dec. 26 - 27, 2010 East Coast blizzard -- if you want to find that, it's just a Google search away -- I would like to post this Vimeo video showing a time lapse of the blizzard in someone's backyard in Belmar, New Jersey. This is also in coastal Monmouth County, not far from where I grew up in the 1970s and spent my summers in the 1980s ...
The Blizzard We DIDN'T Get ...

Interestingly, it starts at midday. These things usually seem to begin in the wee hours.

Thank you to my friend Joe S. called my attention to this.

I do hope very much to move away from Washington, D.C., and back to the shore area -- whether South Jersey, Delaware, or South Florida -- within 5 years (and sooner if I'm abruptly and without warning fired). One way or another. I don't want to live out the remainder of my life, however long or short, in Washington, D.C.
#######

OK, I think that's about all. It's Monday night and I'm watching the marathon of The Golden Girls on WeTv.
Speaking of which ... here is a Golden Girls quote that I didn't even know existed since it had been deleted from both the Lifetime and Hallmark / We TV versions: 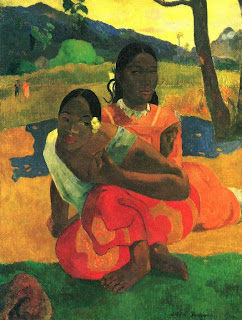 Mr. Allen, the art museum director: "Goodbye, Mrs. Petrillo. Sorry you didn't have an opportunity to experience our museum. I'd LOVE for you to see my MOST PRIZED acquisition: A MAGNIFICENT pair of Gauguins."

Sophia: "WHAT ARE YOU, A PERVERT?? I WAS MARRIED FOR 45 YEARS, I NEVER EVEN SAW MY HUSBAND'S GOGANS!"

OK, that's all for now. My next planned update probably won't be until Wed./Thur.
--Regulus
Posted by Regulus at 6:58 PM

So, you have toned down the viriol just for me.
You are very sweet.
So, you are furious with the weather service? Hmm.
You should come here, the weather is crazy. So are the forecasts.
But your photos are pretty, and in the last entry I meant to say how much I also liked the ones o the trains at night, though I was amaed at the way you seemed to be wandering about in the middle of the night which seemed a scary thing to do...but I guess being with a friend made it ok. The trains look very atmospheric and lonely.
Your mum looked to have had a nice time by the looks. She looks very jolly.

I just don't like our regional office -- the one in Sterling, Virginia for the Baltimore/Washington area. There are, I believe, 122 such "NWSFO's" (National Weather Service Forecast Offices) comprising the NWS field operations. The Sterling one is just arrogant and always happy when nothing happens around here, which is most of the time. Other NWSFO's are eager with "weather" -- ours can't wait to pull the plug on it. And it feels as though they have this uncanny ability to guide it -- they say it and it becomes fact, rather than the other way around.

I wasn't actually wandering about in those pictures. I had gone to Union Station in D.C. and taken a MARC commuter train on the lesser used Camden Line to Baltimore next to the Orioles baseball stadium, and then caught the light rail line. This was just a commuter journey rather than wandering around bad parts of either D.C. or Baltimore.

The other pics -- on P and S Streets -- were just taken in my neighborhood, which is actually mostly fine, the odd nighttime 14-year old mugger(s) notwithstanding.

These pix are great!