I'm worried about my job. I hope I don't get fired next week. I just feel like I really don't do much there and I didn't really make fantastic progress on a somewhat tedious assignment this past week. I'm going to work on it at home tomorrow for a couple of hours. 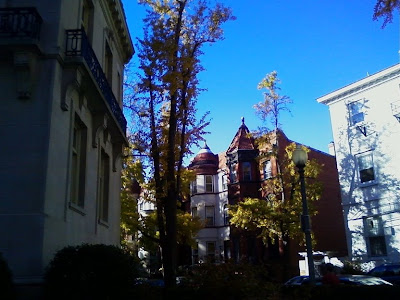 I'm home this evening watching the early airing of the Britcoms on WETA including Air You Being Served? and Keeping Up Appearances. I've never been a big fan of As Time Goes By and I can't get into Doc Martin.
MPT is in another beg-a-thon for money as it now is on average 3 out of 4 weekends per year, so no Britcoms there such as Waiting for God, Last of the Summer Wine, or Fawlty Towers. 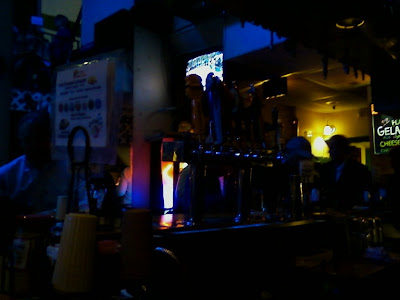 The bar at Lindy's Red Lion in the GWU district here in Washington, D.C., 7:11PM, Nov. 10, 2010.
I met Kristof there on Wednesday night -- shortly after the second part of my root canal. We went there to go to some place different from the enervating D.C. gayborhood.
####### 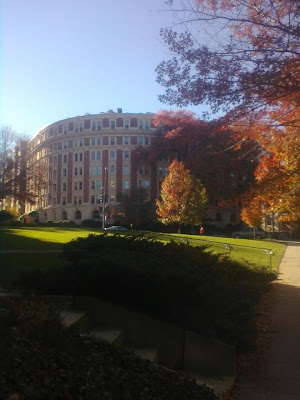 I went to Buffalo Billiards with Chris T and Gary last night, and later we went to Larry's Lounge. Chris T. left and Jamie showed up. I never made it to Cobalt.
As for tonight, I think it will just be Gary and I. Kristof is away in New York City this weekend and Gerry is not around. We were going to go to Secrets but instead are just going to stay in the local neighborhood.
I'm actually very tired. There is something about this apartment that makes me so exhausted and just want to sleep.
####### 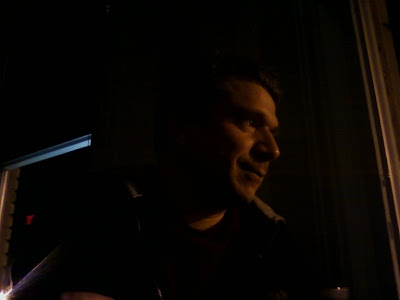 Yours truly looking out of the second story corner window of Dupont Italian Kitchen / Windows, Washington, D.C., 11:58PM, Nov. 10, 2010.
I was at Windows with Jamie late Wednesday night since Thursday was a holiday.

While the Heartland was busy teabagging itself into another Romp Into GOP Oblivion in the midterms held on Nov. 2nd, the elections results here in D.C. were mostly predictable. There really is no Republican party to speak of in D.C., and the racial divide was on display again.
Turnout was at 27.8% of the approx. 453,000 registered voters. 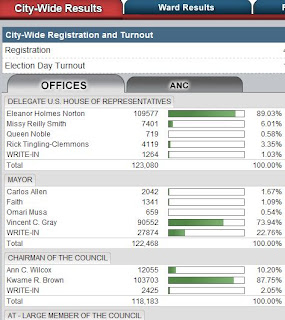 Vincent C. Gray -- nebbish extraordinaire -- beat incumbent Mayor Adrian Fenty in the primaries, and he easily won the main election with 73.9% of the vote compared to 22.8% for write in candidates (probably many for Fenty). As I mentioned, I wrote in a name but that's a topic for my Arcturus blog.

There was also an election for the non-voting Delegate to the House of Representatives. This position is held by Eleanor Holmes Norton, who is something of a D.C. institution.
Her position should not to be confused with D.C.'s nonsensical (read: bullshit) "shadow" House and "shadow" Senate seats.
Jesse Jackson was actually D.C.'s Shadow Senator for a time being and that really turned the city around, especially Ward 8. 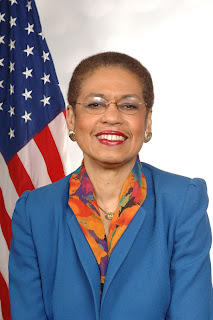 Anyway, Norton won reelection easily with 89.0% of the vote. I didn't vote for her because of the fact she gave up the opportunity to have full voting representation in Congress because of the stupid gun issue.

It was a non-issue because the Supreme Court effectively vacated the city's draconian -- and wholly and utterly ineffectual -- gun control laws.

I voted for the black radical Green candidate Rick Tingling-Clemmons. It so doesn't matter when you live in D.C.
Another candidate (whom I mentioned in a previous entry) was "Queen Noble" of the H.E.R.O.S.H.E.R.O. party ...
I just found this YouTube campaign video of her (it's worth a watch).
Wow. Most intriguing are the parts about Norton having been in power "over sixty, seventy years" (in fact, it will be 20 years as of Jan. 3, 2011) and how this is a "stolen country" that must be held accountable for "crimes against humanity." Oh, and "IT IS WHAT IT IS!"
Crocodile DG -- SEE WHAT YOU MISSED BY MOVING TO AUSTRALIA FOR A YEAR??
Anyway, I stand corrected: I thought her "party" was "Hero's Hero" but in fact it is "Hero's / Shero's" as in "HE-ro" and "SHE-ro". So there was some method to her madness in selecting that name. 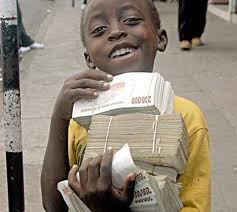 And the $994 TRILLION lawsuit is apparently for slavery reparations. Her campaign statement in the 2010 D.C. Voter Guide was a keeper.

I already linked to it but it is here (see page 18 of the guide).

Above: This little fellow in Zimbabwe is carrying stacks of his nation's worthless currency, thanks to Robert Mugabe.
Meanwhile, speaking of bags, Tommy "Bag Tax" Wells easily won reelection in Ward 6, and because it worked so well in cleaning up the Anacostia River, the idiot now wants to tax breathing the air to combat non-point source air pollution.
Overall unofficial results are here. 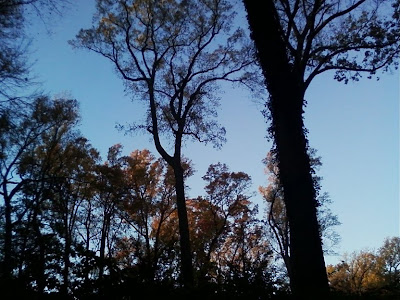 Trees growing on the grounds of the Columbia Country Club as seen from the Georgetown Branch Trail, Chevy Chase, Md., 4:38PM, Nov. 11, 2010.
I was taking a walk after lunch at Moon Gate in Bethesda with my Hippograms friend K. We walked back into D.C. along Connecticut Avenue, which is very busy and not the nicest walk. Unfortunately, the side streets -- such as the one shown below -- go off on to a warren of other side streets and there is no direct route to Western Ave. / the D.C. line where the regular street grid begins. 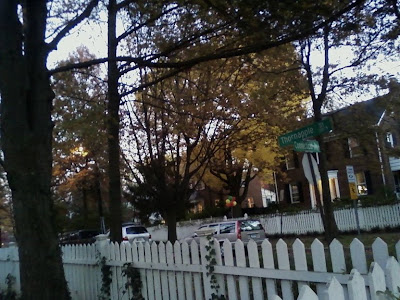 Thornapple Street at Connecticut Avenue, Chevy Chase, Md., 5:06PM, Nov. 11, 2010.
This is actually "Section 5 Village of Chevy Chase." Some of the streets here are actually NOT on the D.C. street address grid but have single digits for addresses.
#######

A few excerpts of recent op-ed pieces I liked. The first is by Paul Krugman of The New York Times. 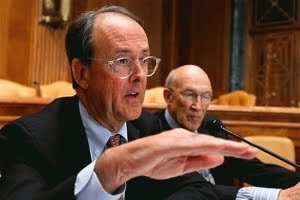 He wrote in his Friday op-ed about the ideologically "hijacked" National Commission on Fiscal Responsibility and Reform that Pres. Obama foolishly appointed given that it is co-chaired by corporate pussy "Democrat" Erskine Bowles and the ever-more-creepy rightwing Republican Alan Simpson and most of the 18 commission members are stacked heavily the same direction.

Of the preliminary recommendations from the two chairs, it's all tax cuts for the super-rich, reductions in Social Security benefits and increased retirement age for struggling working class people, "caps" on revenue, vague and unspecified assumptions about reducing health care sector hyper-inflation, and the like. These have not yet endorsed by the overall commission.
Anyway, Krugman wrote: 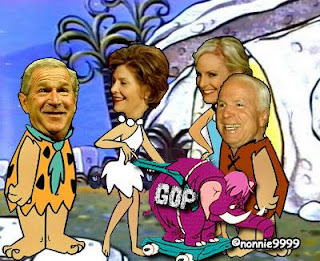 "It seemed obvious, as soon as the commission’s membership was announced, that 'bipartisanship' would mean what it so often does in Washington: a compromise between the center-right and the hard-right ... It's no mystery what has happened on the deficit commission: as so often happens in modern Washington, a process meant to deal with real problems has been hijacked on behalf of an ideological agenda. Under the guise of facing our fiscal problems, Mr. Bowles and Mr. Simpson are trying to smuggle in the same old, same old — tax cuts for the rich and erosion of the social safety net."

Morford is still quite enraptured with Obama and in his Nov. 3rd column he complains about young liberals who stayed home this past election: Letter to a whiny young Democrat.
His next one on Nov. 10th is Dear Tea Party: You will now get yours. It is worth excerpting: 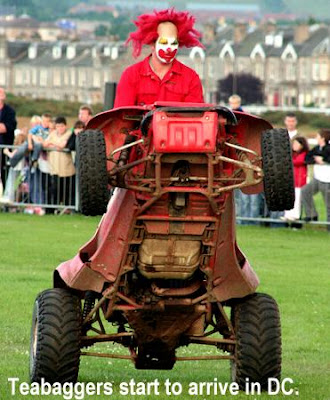 "Just wait until nothing at all is done to service the Tea Party non-agenda, because it's ridiculous and impossible to service. Just wait until you note how there is no actual shrinking of government, no restoring some bogus sepia-toned idealism that never existed, no saving of your job. There is, of course, but one GOP agenda: furthering their personal stranglehold on all things powermad and avaricious ... "Exercise is irrelevant. What matters in losing weight is what you eat, pure and simple, and how much, nothing more than that ... One of the reasons I know what I know is that I know liberals, and I know liberals lie, and if Michelle Obama's gonna be out there ripping into 'food desserts' and saying, 'This is why people are fat,' I know it's not true." -- Rush the Butt
Source: here

NEXT UP! Beauty and Grace Tips from Ann Coulter.

Another metaphysical "biocentric" piece by Robert Lanza for Kristof (and whoever else is interested: Why Are You Here? A New Theory May Hold the Piece.
Excerpt: 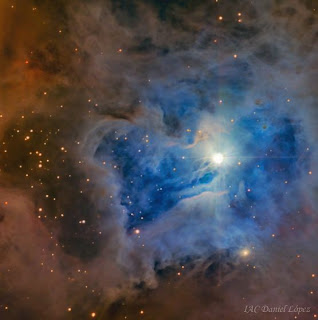 "Indeed, according to biocentrism, it's us, the observer, who create space and time (which is the reason you're here now). Consider everything you see around you right now. Language and custom say it all lies outside us in the external world. Yet you can't see anything through the vault of bone that surrounds your brain. Your eyes aren't just portals to the world. In fact, everything you experience, including your body, is part of an active process occurring in your mind. Space and time are simply the mind's tools for putting it all together."

It looks as though we should get some rain on Monday into Tuesday and thereafter the pattern hopefully will feature more weather systems / chances for rain. 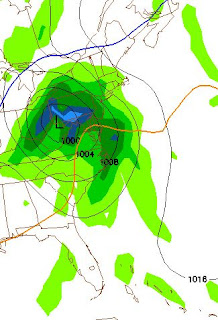 This outlook is based on today's 12Z and 18Z runs of the GFS.

I'm sure WOODY! and LWX in general are very unhappy about any possible shift to a wet pattern.

They're probably holding weather seances to get the GOOD DRYING / SHEARED OUT GOD to work its magic. 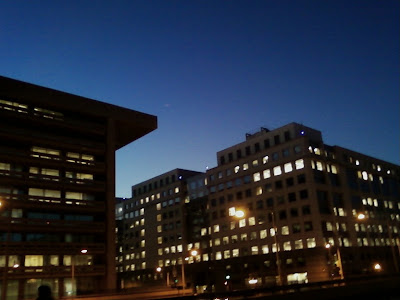 OK, that's all for now. My next planned update (based on how things go this upcoming week) will be Monday or Tuesday evening.
--Regulus
Posted by Regulus at 6:42 PM

I do often feel like I've been missing out on a lot of things in DC since moving here, but boring DC politics isn't one of those things.

Redskins vs. Eagles on Monday night football starts in about an hour and I'd love to be at my favorite sports bar right now. Instead, I'm at work and it's not even lunch time yet. That's missing out.

I was referring more to the video than the actual predictable elections.

I would feel more sympathy for you -- except for all those weekend excursions to tropical Pacific islands, not to mention living in Australia so near Sydney.

Thank you for the comment, though. No one else is commenting here anymore.