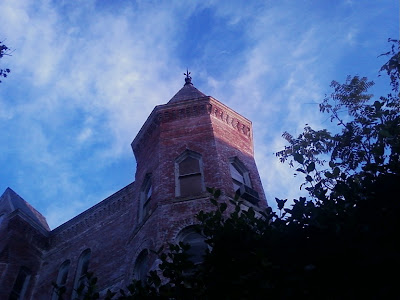 So I had some distressing and potentially very $$$ expensive $$$ news regarding my tooth ache when I went to the dentist today (I got a quick appointment).
This continues the long history of dental issues that I've had. At minimum I need a second opinion. Oh, and doing nothing is NOT an option.
On the flip side, though, I was able to go back to Cobalt last night with no issues and tomorrow should finalize it all as OK.

First, though, I am going to post a series of images that Chris T. took last week -- mostly on Tuesday, Oct. 19th -- on his brief business trip to the Los Angeles area between the 18th and 20th. 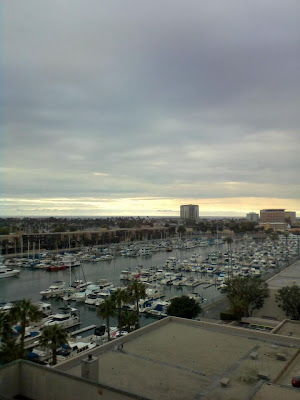 He sent all of these by picture message and I promised I would post them in an entry. He took these pictures with his cell phone camera.

Caption: Greetings from Sunny (?) California ... This is Marina del Rey in LA with the Pacific on the horizon.

Ed. Note: This was taken Monday Oct. 18, 2010 (shortly after Chris arrived). It is the view from The Ritz Carlton, Marina del Rey.

Here is a more colorful image showing about the same view: 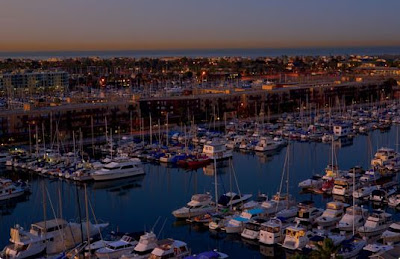 I was not there and the captions are those he sent accompanying the photos. The pictures are not of downtown Los Angeles but rather the area near the airport, the Ritz Carlton in Marina Del Ray, and Venice, a section of L.A. that borders the Pacific Ocean.
I am posting them mostly in chronological order though I may have some out of order, since he sent them to me in a batches and then I forwarded them to my Hotmail later on the 19th. 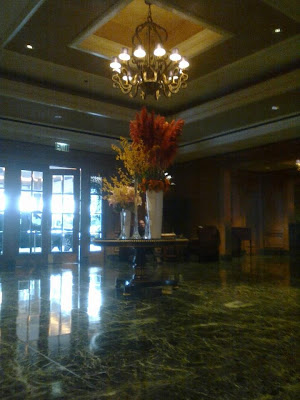 Ed. Note: Yes, this is where Chris stayed.

Also, you will see that it is actually raining in some of the pictures. There was an out-of-season cutoff low that brought rain the Southern California, although actual amounts were relatively light. LAX had 0.22" on the 19th and 20th combined.

Of note, LAX has actually had measurable rain 6 of the last 9 calendar days including today, and at least a trace on 10 of the last 11 days including with 0.46" and 1.20" this month so far. Downtown L.A. at USC had 0.10" during the 19th and 20th. These numbers are well above the normal of about 0.25" month-to-date.
I'm paraphrasing the captions Chris wrote in the accompanying messages, though in a few cases he didn't write any.
####### 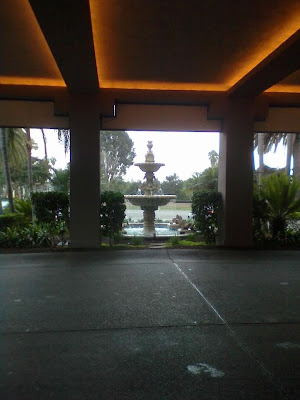 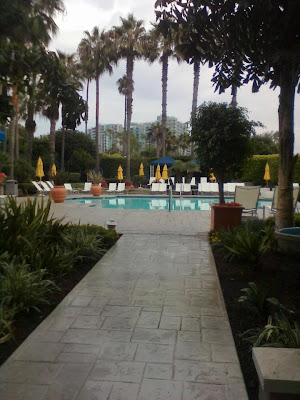 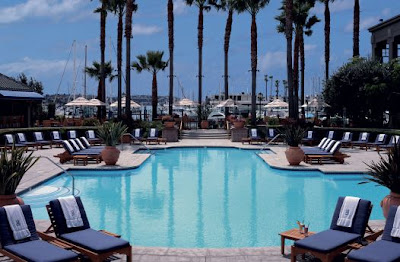 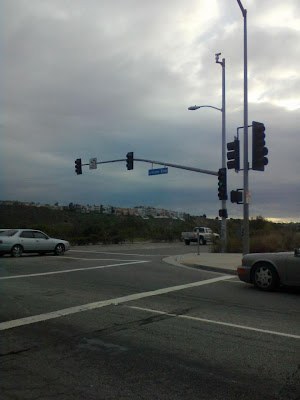 Caption: Hard to tell but these are nice houses on hillside.
Ed. Note: This is along Lincoln Blvd (Rt. 1) which runs through parts of the west side of L.A. and into unincorporated Marina del Rey.
####### 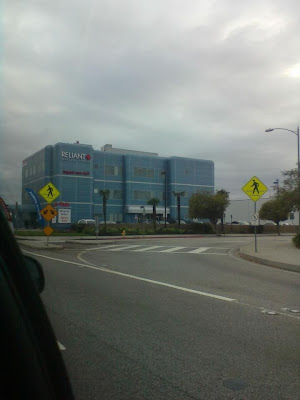 Caption: A strange medical building by LAX.
Ed. Note: As the building is conveniently named and numbered, I was able to determine this is the Reliant Medical Center at 9601 S. Supulveda Blvd., Los Angeles, Calif., Oct. 19, 2010.
####### 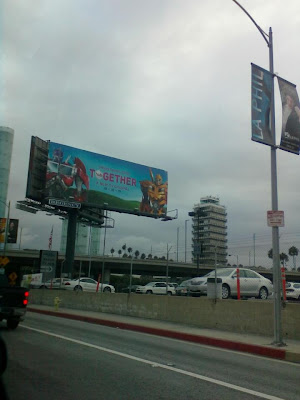 Caption: LAX towers.
Ed. Note: I'm not sure what structure this is -- it is not the main LAX control tower and iconic Theme Building, but instead is located near the LAX light towers (see next image).
####### 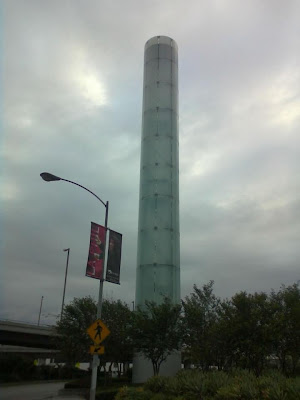 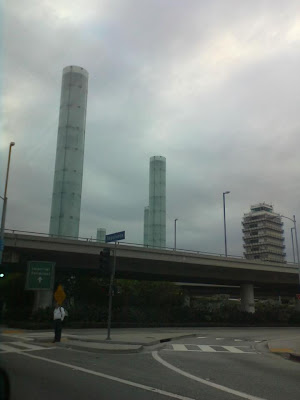 More of the LAX Light Towers as seen on a cloudy day, Oct. 19, 2010.
Editor's Note: This is one of the LAX Light Towers as seen during the day. At night these towers -- -- there are 26 in all of differing heights -- are illuminated different colors. This was taken Oct. 19, 2010.
The project was known as the LAX Gateway Pylon Project / Kinetic Light Installation. The artist was Paul Tzanetopoulos and his Web site is here. And here is more information the tower particulars. 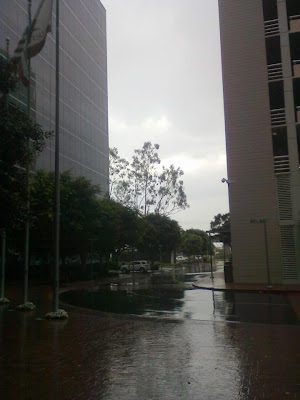 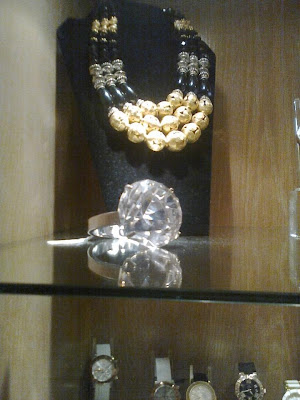 Ed. Note: Not sure where this was taken. 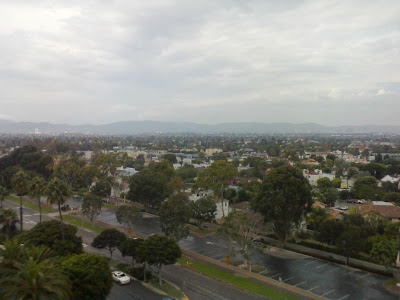 Caption: The Hollywood Hills and I'm pretty sure that's Century City on the far right.
Ed. Note: This is looking toward the N and NE from Marina del Rey across parts of "Westside" / West L.A., including Century City and Rancho Park and also Culver City, a separate incorporated city in Los Angeles County. The picture was taken from an office building on Oct. 19, 2010.
####### 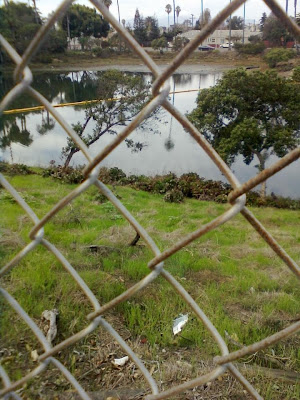 A canal behind a chain link fence in / along the border of Marina del Rey that empties into the nearby Pacific Ocean.
####### 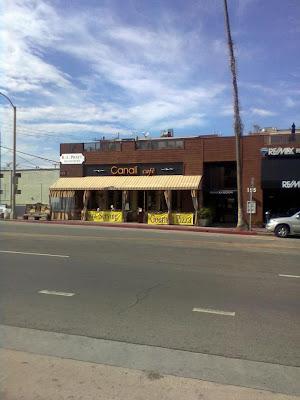 Caption: This here's the Canali Cafe ... It may be of interest to some.
Ed. Note: The restaurant's Web site states that the place is located in Marina del Rey rather than Venice (Venice Beach). The former is an unincorporated area while the latter is actually part of the City of Los Angeles. The boundary here appears to be along Washington Blvd. It had cleared up at this point later on Oct. 19, 2010.
####### 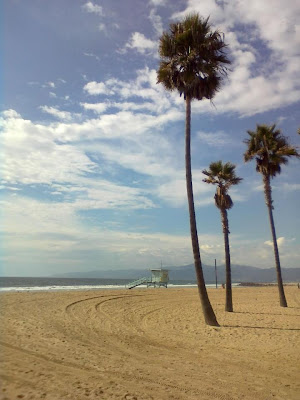 Marina del Rey does not appear to actual border the ocean at all.
If you want a better view of how it fits together, see here. 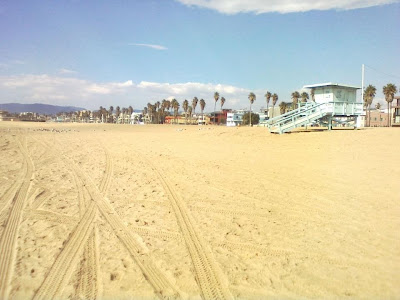 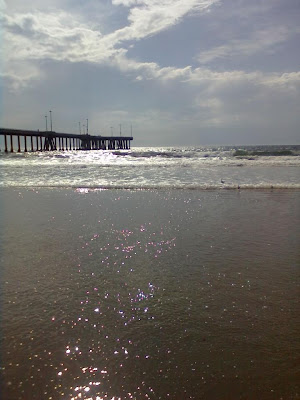 The Pacific at last! Actually, Chris's caption read: "I touched it. Now's the time to go drinking."
Ed. Note: This is the Venice fishing pier. I already posted this image in a previous entry.
OK, that ends the L.A. pictures that Chris took last week.
#######

I was going to post more pictures that I took the past several days in my neighborhood, but my toothache is really flaring up now and I'm in pain with a headache. I'm going to have to end this entry now. 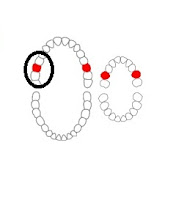 Basically, what's happened is the decayed root of a tooth I had crowned in May 2002 (#14, upper left, or the "maxillary first molar) has become infected (abscessed) and the crown needs to be removed and the tooth extracted.

The dentist -- the same guy who placed this crown in -- wants to do all kinds of work that will run to $5,000 and my insurance would, at best, cover half of it. 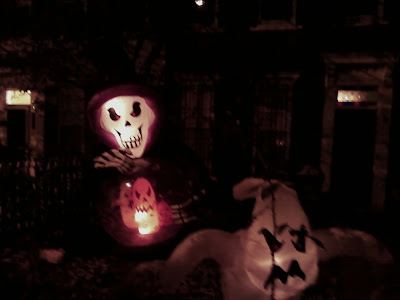 Scary indeed.
I have to get a second opinion and go to an in-network dentist at some point. In the meantime, I was given an antibiotic prescription I need to fill tomorrow.
**I'll be complaining and dwelling on this extensively in upcoming entries, so I'll just end for now.**
Oh, yes, we got screwed out of rain tonight, again, and it's way too warm (near 70F at the 11PM hour).
--Regulus
Posted by Regulus at 8:02 PM

Are there any good available dental assistant New Baltimore positions out there?