The Waters of Washington -OR- The Hippogate 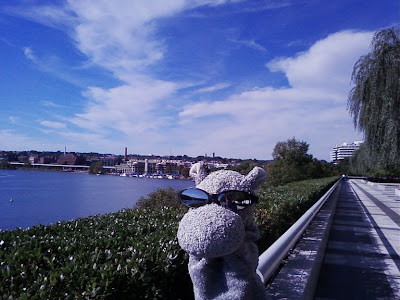 Mr. Hippo A. Potamus of the Hippograms blog along the outdoor edge of the Kennedy Center along the Potomac River with Georgetown in the background, 4:11PM, Sept. 11, 2010.
#######

I had planned to post the third and final installment of my Florida pictures. However, I would like to post the pictures I took this past Saturday at the Kennedy Center, the Watergate, and in Georgetown at Mr. Smith's restaurant with my friend K.
I'll post the rest of the Florida pics later this week.
#######

For starters, I was about 2 hours late getting there -- I can only again apologize to K. -- and had a severe headache as a result of too much "going out" the previous night and then being upset about something on the walk there from my apt. But once I got there, K. introduced me to a very special hippo ... 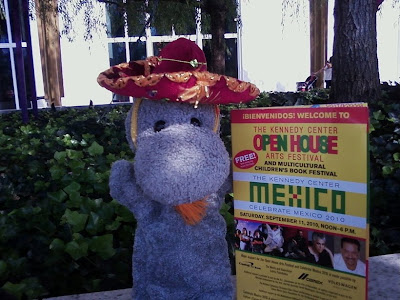 Here is Mr. Hippo A. Potamus taken Saturday outside the Kennedy Center, 4:07PM, Sept. 11, 2010.
Hippo was sporting a sombrero at the Kennedy Center as it was the annual Kennedy Center Open House Arts Festival and Multicultural Children's Book Festival for pretentious D.C. area parents, and this year's theme was "Celebrate Mexico 2010."
#######

In what was my first-ever outing for any of my plush babies, I brought along in my book bag Randy, the green-and-white-striped monkey, and little Aurora, the hippo. 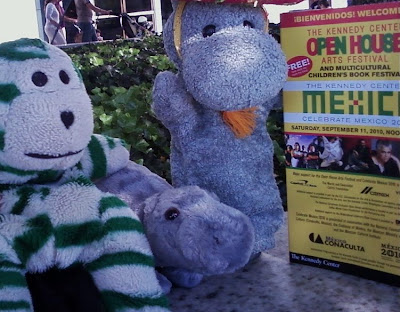 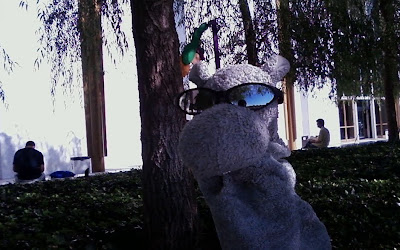 K. and I -- and our plush stuffed companions -- did not stay long at the "KenCen" as the crowds were too big and we were both hungry. We walked over to the next door Watergate to the Safeway that's in the Watergate East where we got a snack and drinks.
I've written about this store before and how I have on occasion shopped there even though it's out of immediate walking distance from my 17th Street gayborhood bubble. This Safeway attracts a rather sizable contingent of students from nearby Geo. Wash. University. 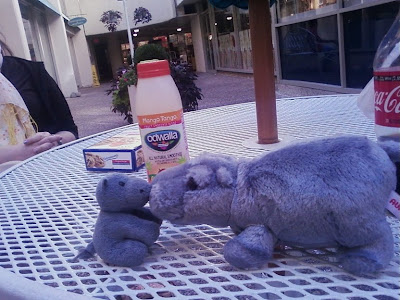 Here Aurora from the Hippograms hippo pod and my Aurora meet on a wrought iron table in the shadowy sunken outdoor promenade quite literally below the Watergate East, 4:59PM, Sept. 11, 2010.
#######

There was a swishing white noise sound in the air from water plunging about 20 feet into the bottom-most, flattened saucer-like fountains. The Watergate gives me a weird deja-vu-ey feeling that I can't explain, as if in some strange Jersey shore building circa 1965. No, I wasn't born in 1965.
We sat there for just over an hour. There was a weird and wealthy lady in the nail salon place next to us. She looked like a sort of aging, overly Botoxed, bronzed hybrid of Sophia Loren and Jackie Kennedy.
####### 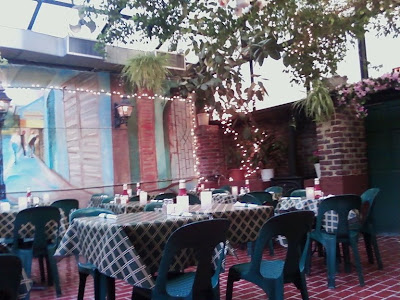 Thereafter, K. and I went over to Mr. Smith's in Georgetown for a larger dinner. While I was last at this restaurant on Christmas night 2009, the previous time I was there where I didn't have to worry about money was in 2003.
After dinner, we walked across Georgetown back into the Dupont hood by early Saturday night. K. and the two hippos headed back uptown on the Metro and I went home with Randy and my Aurora. Later, I went out with Gary to Cobalt and then by myself to Omega (as I mentioned in my previous entry).
OK, that's all for now. I plan to update this blog in a day or two.
--Regulus
Posted by Regulus at 9:12 PM

you're nuts!
I knew it all along!

i have i question - whose aurora killed that giant coca-cola on the table?

and a follow up - did the coke aurora get all jacked up on caffeine and sugar and start chasing african national park workers?

Mike -- Mr. Hippo A. Potamus was surprisingly small in person, but he has a lot of charisma and personality and photographs great.

Both Auroras had lady-hippo-like sips over the course of an hour, and no one was "jacked up on caffeine and sugar." I, on the other hand, was hung over with a very bad headache that gradually eased.

And no young African game wardens were chased -- at least not around the Watergate Complex!

All hippos (and their people) had a great time; I was happy to meet part of another local hippo pod. And you have to like a festive monkey! I've been a busy little hippo this week, but I'm looking forward to another hippo-outing soon.

Littlest Aurora behaved herself with the giant Coke, but she did get a little buzzed from her coffee and dessert at dinner. It took a while to tire her out enough to go to sleep.