Adrift in the Wet Summer Heat of Washington, D.C. 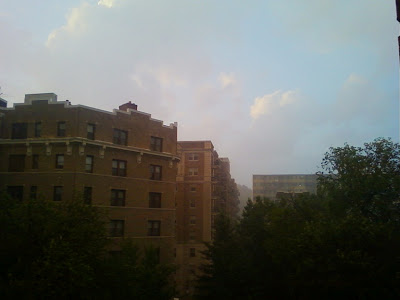 This entry contains a series of 15 pictures I took between Thursday (July 15th) and today, including the lead image, along with one that Gary took. (The lead one looks better close up.) I'm mostly going to skip any actual substantive entry as I'm quite tired and it is already 11PM and I want to be in bed by midnight. 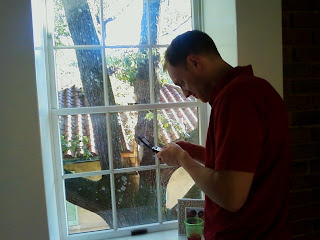 First, though, I want to post a link to Damon's new blog Crocodile DG that he started to keep an online record for his friends and family here in the U.S. of his planned one-year stay in Australia. He moved there over the weekend with his wife, Shaila, for a year-long post doc.

I plan -- if I can afford it and things work out -- to visit them in early 2011 and also to visit my blogger friend Fifi who lives not too far from him in Sydney.
I urge my regular readers to check also in on his blog regularly.
#######

Photographs from earlier this evening ... 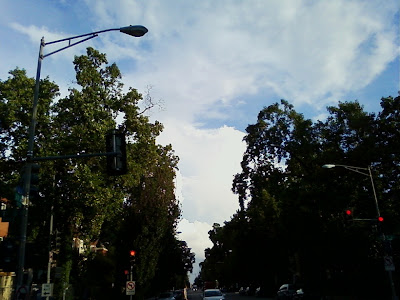 The view looking south down 16th Street from T Street, NW, Washington, D.C., 6:53PM, July 19, 2010.
The White House is actually visible about 1.2 miles to the south from this vantage point, but my cellphone camera resolution cannot pick that up. The Washington Monument looms up behind it by another 1/4 mile or so, just slightly to the south, so not lined up perfectly well with 16th Street, NW.
#######

It was horrendously humid and excessively warm evening -- in keeping with the theme of this dreadful summer here in Washington, D.C. -- with widely scattered showers and t-storms. I was walking home from Farragut West, whence I took the Metro from L'Enfant Plaza after work (living where I do, I can go to one of several stations). 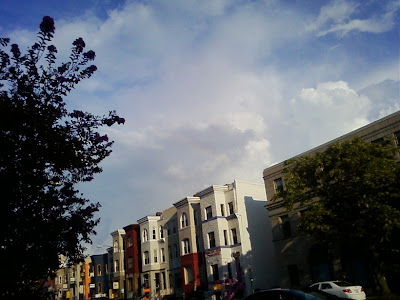 The sky as seen over the 1500 block of U Street, NW, right by the intersection of 16th Street, NW, within 500 feet of where I live, Washington, D.C., 6:55PM, July 19, 2010.
I've walked up and down loud, ugly, and overbearing U Street a number of times in the past few days at very different hours -- 830AM Monday morning heading to the U Street/Cardozo Metro (the closest and most direct station from my apt. to L'Enfant Plaza for my always-harried morning commute) and 230AM Sunday (see below).
####### 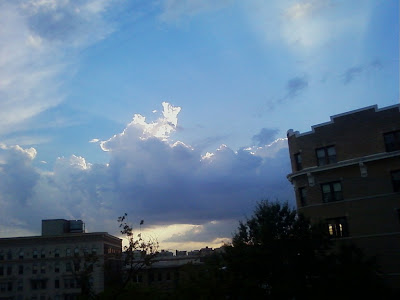 A quick summer downpour as seen from my apartment window looking toward the west with the Brittany across the street prominently visible, Washington, D.C., 8:18PM, July 19, 2010.
A tiny heavy shower popped up just northwest of D.C. and moved across midtown and downtown. Of note, there have now been three heavy rainfalls around Dupont Circle that have nearly totally "officially" missed DCA. This includes the nearly 1 inch deluge midnight Saturday, a short but CTG-LTG explosive t-storm last night around 1030PM (although both BWI and Dulles received approx. 1/2 inch), and the above-mentioned shower, which actually dropped 0.03" at DCA.
####### 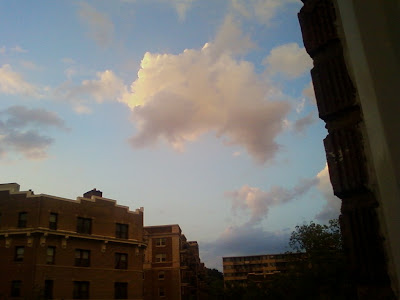 The remaining photographs were taken between Thursday and Sunday and are posted in chronological order.
Photographs from Thursday, July 15, 2010 as I walked home -- as I do maybe once a week -- from my office at L'Enfant Plaza. It's about a 2 mile walk. 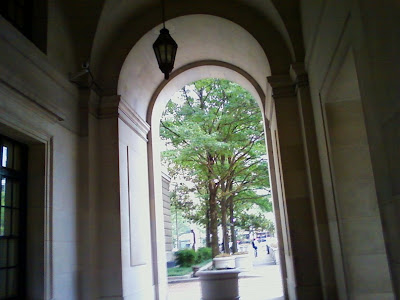 One of the ornate archways of the sprawling Ariel Rios Federal Building in downtown Washington, D.C., 6:35PM, July 15, 2010.
The Ariel Rios Federal Building was constructed in the 1930s and it has curved hallways lined with dark wooden paneling. It was originally housed the Post Office and today houses EPA. It was renamed Ariel Rios in early 1985 for a Miami-based ATF agent killed in duty in Dec. 1982 at the age of 28 as it housed ATF at the time. I don't believe it does any longer.
I had a statistics class as part of my public policy masters degree in that building in spring 2007.
####### 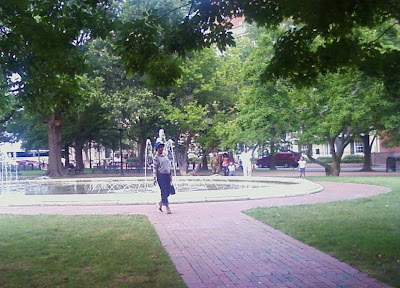 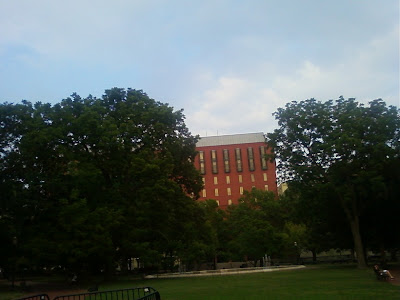 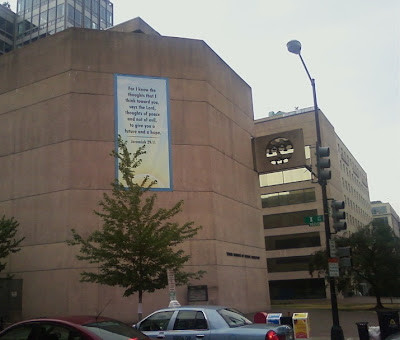 The truly architecturally ugly ("Brutalist style") building that houses the Third Church of Christ, Scientist ("Christian Science") with a lovely Biblical quote from Jeremiah 29:11 on a large plastic poster. This was taken at 6:56PM, July 15, 2010.
The Bible quote states:

"For I know the thoughts that I think toward you, says the Lord, thoughts of peace and not of evil, to give you a future and a hope."
####### 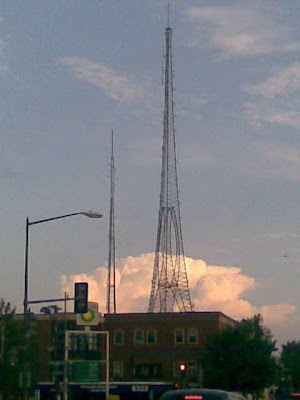 Here is a picture (that Gary took) this past Friday evening (July 16, 2010) of the Hughes Memorial Tower with about a 50 mile distant t-storm bathed in the light of the setting Sun.

The Hughes Tower is that "star tower" transmission tower I've so often mentioned, located tower off Georgia Avenue between Peabody St. and (what is my favorite D.C. avenue name) Quackenbos St., NW, in a crappy part of the District. Its little companion tower is also visible.

That distant t-storm visible in the above picture was part of an east-bound east-west oriented line from St. Mary's County west to Fredericksburg, Va.
A northward moving outflow boundary from this line and southbound outflow boundary from another east-bound east-west oriented line of t-storms in southern Pennsylvania actually "collided" over D.C. proper around 9PM (you could see it clearly on the radr) and probably created the lift needed for the t-storms that developed right over the city and suburban Maryland around 1145PM Friday night.
This was shown in the midnight downpour image I posted in my entry yesterday.
#######

On Saturday night, Gary and I went to Town, where I had not been in nearly 2 years. We actually had a good time even though I'm too old, too cynical, and way too out of shape / fat to go to a pretty boy dance club anymore. 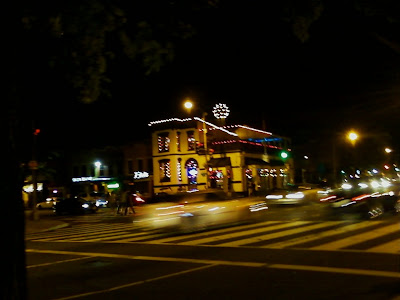 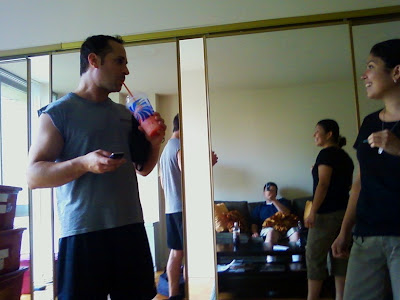 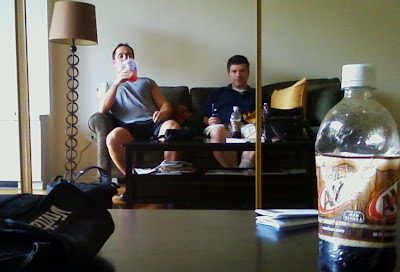 Gary and I seated on the couch, 5:21PM, July 17, 2010.
Thereafter, the three of us went to the rooftop pool deck atop Gloria's building and we went swimming. That's where the picture of me seated on the lounge chair in the previous entry was taken.
####### 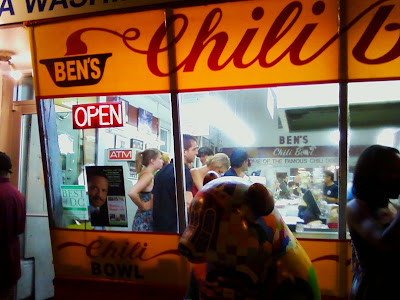 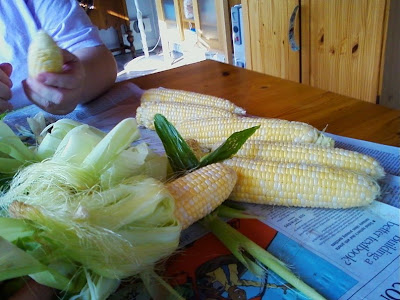 Before ending, I'd like to link to a few commentary pieces. Here is Salon's Glenn Greenwald's latest jeremiad-- this was denouncing what an evil corporate oligarchical, shadowy, surveillance-crazed, military-industrial, overclass/underclass police state America has become (it's called "The Real U.S. Government") -- and here is a piece by Ross Douthat of The New York Times entitled "The Roots of White Anxiety" that is very much worth a read. Paul Krugman's latest column is also worth a read.
OK, that's all for now. My next planned update may not be until Thursday or Friday.
--Regulus
Posted by Regulus at 10:20 PM

I'm too old, too cynical, and way too out of shape / fat to go to a pretty boy dance club anymore.

Very funny. I'm really glad you've gotten into GG almost as much as I have!