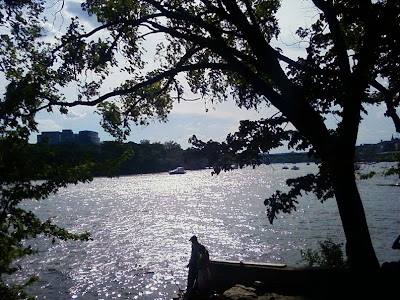 I had intended for this to be a relatively short entry as I actually want to do a little work for my new job at home tonight. My boss is back tomorrow afternoon and I have only made about half to two-thirds of the progress I wanted to on a particularly tedious assignment.
In the end, though, this ended up a typically-lengthened entry. 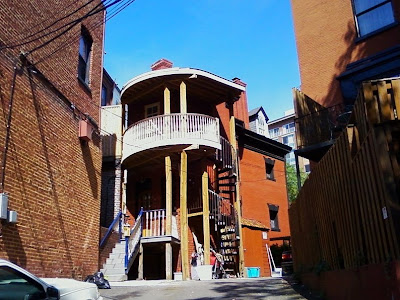 I'm watching an episode of Touched By An Angel on Hallmark Channel. It's the episode "Missing in Action" when Monica appears as an old woman.
Speaking of old women, there was a crazy lady -- a very old, wizened white woman -- with nearly no teeth and the few she had quite snaggle-toothed in appearance on the Metro. She had on these white-framed oval glasses that made her eyes look large.

Here is a "pulse" thunderstorm -- cumulonimbus cloud -- that popped up probably 25 to 30 miles away over western Montgomery County, Md., as seen from near the Watergate complex, Washington, D.C., 4:18PM, May 31, 2010.
The storms expanded out into a big cluster well to the north of here within a couple of hours.
#######

I was riding home from L'Enfant Plaza via a transfer at Metro Center to Dupont Circle rather than going to Farragut West and detouring to St. Matthew's (as I have done several times since the job started) or even walking home outright. This was on the Red Line to Dupont Circle. 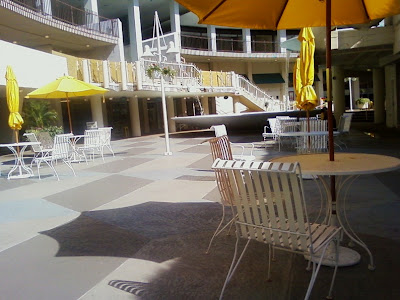 Anyway, she was a a wild and profane woman in a horrible bright green dress that looked more like a big art studio smock. She was seated in a front seat near one of the doors -- so there was no seat in front of her. There were people standing near her including a young Asian woman with a suitcase on rollers. I'm not exactly sure what happened but the old woman started kicking (nearly falling out of her chair) and cursing the woman as a "f/king Asian". 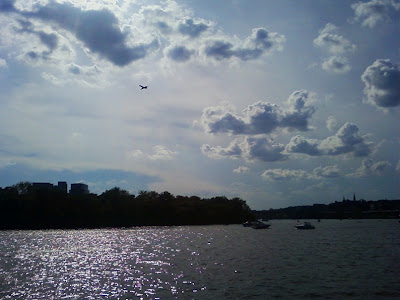 Another lazy Potomac River view with Theodore Roosevelt Island and the towers of Rosslyn visible in the distance and a jet inbound for National Airport, 5:06PM, May 31, 2010.
#######

No one said anything but sort of moved away from her. This was on the ride from Metro Center to Farragut North. She asked aloud if Farragut North stop was Dupont Circle and another young lady said no, it wasn't.
On the next segment from Farragut North to Dupont Circle, a young, tired looking mother with blond hair old a small baby close to her sat next to the crazy lady, but she said nothing. I was standing and sort of facing the whole show. 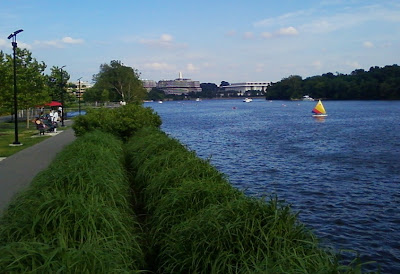 This is also the Potomac River looking east from near the F.S. Key Bridge, Washington, D.C., 6:40PM, May 31, 2010.
This was taken at the edge of the new park that has been created along the water's edge (complete with unfenced off 25 foot drop, only those fluffy looking plants blocking the way). This is not facing into the late afternoon /early evening Sun and away from the mixed t-storm anvil-head blow-off cirrus shield and cumulus cloud deck and toward a bluer sky. That's the Washington Monument poking up above behind the Watergate (to the left of the Kennedy Center).
#######

I was quite livid -- thinking what I would have said or done if she had said and done that to my mom or someone I loved. But then the old woman looked so pathetic -- almost cradling her head as if in pain and reminding me of my very old paternal grandmother in New Jersey who raised me for a time during my childhood and whom I loved so much and who died in early 1988 at age 87. 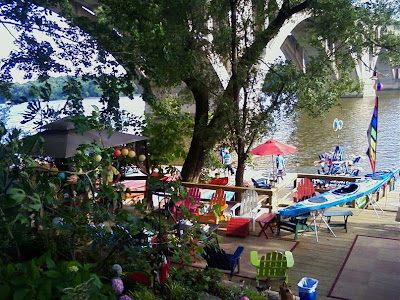 The train arrived at Dupont Circle and I got off as did crazy old lady in green dress and I lost sight of her in the throng of people as I headed up the escalator, and it wasn't like I was waiting around for her.
Upon reflection, as I walked home in the thickly overly-humid D.C. June day, I was glad I didn't say to or have any interaction with her. I mean, it's hardly a courageous thing to get angry at an old lady, even a crazy, profane one. 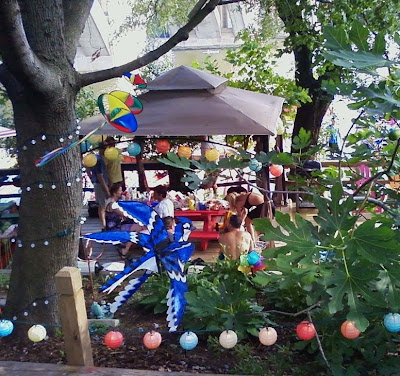 Speaking of Metro and being in pain, this morning I got whacked in the mid-section (on the hips and edge of my abdomen) by the two big boxy- triangular pieces of yellowish plastic that retract when a fare card is inserted or Smart Card is swiped that have the proper fare value.
These aren't supposed to open when you don't have enough fare on your card and they are supposed to remain open when they do until you pass through. However, in my case, I put $1.45 on a card yesterday when I needed $1.75 (the difference between off-rush hour and rush-hour fares on the shortest of trips as is my morning trip from U Street / Cardozo to L'Enfant Plaza.
Oh, yes, fares are about to be jacked way up -- by a dollar or so. 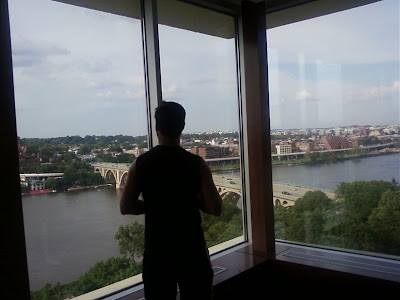 Gary looking from the 14th floor of the Key Bridge Marriott on the Virginia side of the Potomac in Rosslyn / Arlington looking across the river toward Georgetown. Jack's Boathouse and the kayak rental place are just to the right of his left arm on the opposite side of the river.
The above picture and the ones that follow were taken in the seated on the top-floor Capital View Room ballroom / banquet hall / conference room / former restaurant of aforementioned Key Bridge Marriott Hotel in Rosslyn (Arlington), Virginia, 6:08PM, May 31, 2010. We walked there over the Key Bridge en route to the Rosslyn Metro to head back into the city to Woodley Park.
#######

What happened is someone else went through and I inserted my card and it said "SEE STATION MANAGER" on the display -- which means you need more fare and go to the Add-fare Machines -- as it rejected the car. It was all a blur and I was in a hurry and I just unthinkingly took the card and went through anyway and THAT'S why I got hit.
Good thing I wasn't standing sideways. 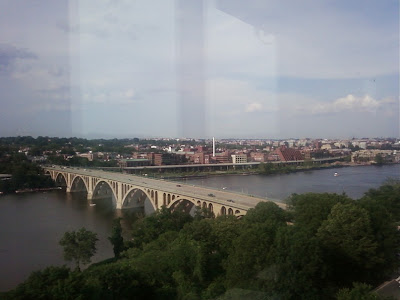 Another Key Bridge Marriott top banquet hall view looking northeast over the Francis Scott Key Bridge and Potomac River and across the Georgetown section of D.C. toward Dupont Circle and beyond, 6:07PM, May 31, 2010.
####### 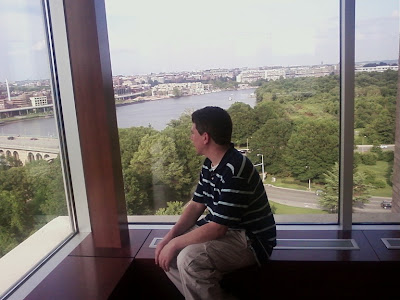 Changing subjects, there have been no fewer than 4 sirens screaming by from that fire station that is around the corner from me (Engine Co. No. 9, I think), which itself is part of the complex that contains the 3rd Precinct police station for the MPD. 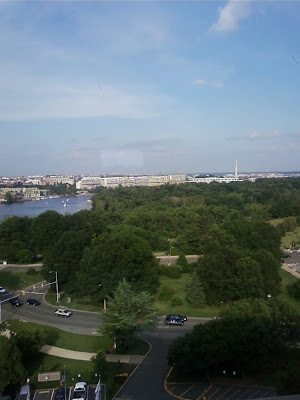 Another view from the Key Bridge Marriott top floor view looking east across Theodore (Teddy) Roosevelt Island and toward downtown Washington, D.C., with the Washington Monument clearly visible about 3 miles away, 6:13PM, May 31, 2010.

I'm so frickin' tired of those sirens -- and they tear through 16th and U Streets and often up and down (the wrong way) of New Hampshire Avenue, NW, blaring and blaring in their Ode to D.C. Urban Pathologies.
No, I'm not saying I wouldn't call 911 if I was in help, which I most certainly would and in fact have done. Maybe that makes me a hypocrite. I had the sound, it is so obnoxious.
The only way I can ever be free of this interminable sound is to move. As it is, they don't tend to interrupt my sleep as there are fewer sirens at night, and I have my electric fan and (usually) my window a/c turned on, even in winter except on the coldest of nights, since this old brick building quickly gets stuffy and the ancient radiator will sometimes come to life, as it did on a number of occasions last winter.
####### 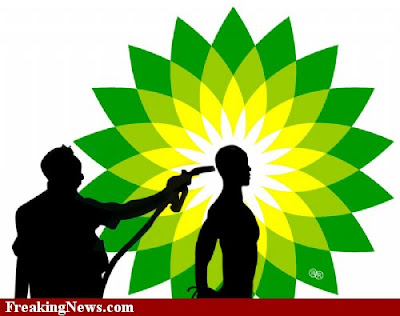 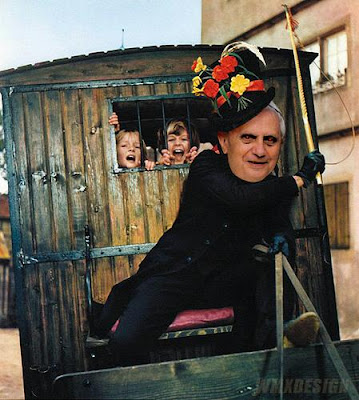 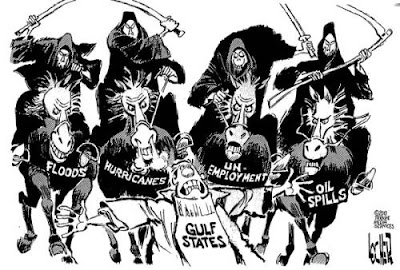 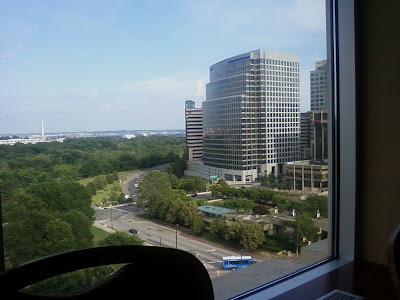 The thunder from the storm made an interesting sound as heard from my office by L'Enfant Plaza reverberating through the odd topography created by the rectangular 10-story buildings that predominate there. It was sort of a muffled peel that reverberated in a kind of stunted but still definitive way way. 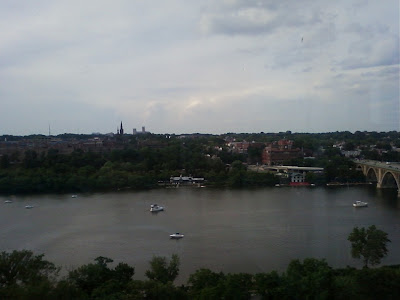 The view looking due north from Key Bridge Marriott across the Potomac River toward Georgetown University (Healy Hall is visible) and the more distant Washington National Cathedral, 6:20PM, May 31, 2010.
The original "pulse" t-storm had expanded out into a big cluster about 80 miles to the north and created the thick cirrostratus shield.

OK, I think that's all for this entry. I have refrained from any political commentary domestic or foreign. Countdown (Keith Olbermann) and then Rachel Maddow are on MSNBC -- guess I'll spend the next two hours pissed off, though sometimes they are actually quite funny and enjoyable to watch. 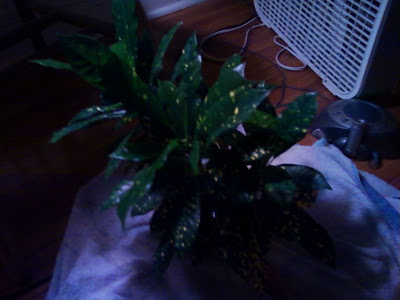 Here is my Gold Dust Croton -- which has grown tremendously and I need a new pot for it -- on May 29, 2010. I move it around several times depending on the time of day including under my lamp in the evening.
#######

Oh, yes, one last item from yesterday: in the lobby level coffee shop / snack bar of the Key Bridge Marriott (where I had never entered before), I met an employee there whose name tag said "Big Matt." He was about 26 years old -- and he was 7'3" tall (I guessed 7'1"). I said to him he was probably the tallest fellow I ever met. He was also a very nice guy. He's probably one of (if not THE) tallest guy to work for the Marriott Corp.
Anyway, my next planned update -- and I hope I won't have anything bad to report from my new job -- will be Thursday or Friday.
--Regulus
Posted by Regulus at 6:48 PM

The London Tube turnstiles have doors that swing open rather than retract. You can get slapped but not castrated. NYC has that sort of rotating metal rods that you push yourself. It's probably the best solution.

I don't mind sirens but I do hate those freaking carillon bells that are ringing right now for hell knows what reason up on Queen's Tower. It's not even a melody. They are just all firing at the same time. I'm sure all this f...ing cacophony is supposed to be festive and solemn and it's a f-ing celebration of something...Lord, I if I had a gun right now...

:) loved the second paragraph rant - it is so regulusesque... :)