Bad or Good Weekend and a Fear - Based Existence 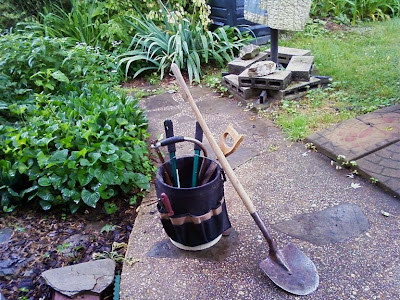 Except for a nice visit to see my dear friend Quill recuperating at her parents' house in Silver Spring after surgery in the hospital, except for that, my weekend was a crappy one -- primarily because of non-stop panic over the security of my job and my dire money situation until at least this coming Thursday.
Welcome to America. 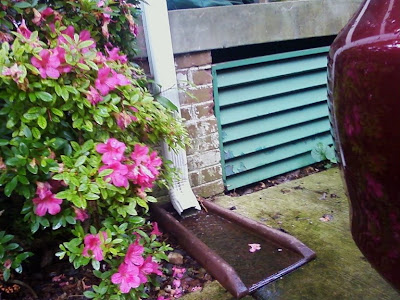 I am flat broke at least until Thursday when I HOPE AND PRAY I get my first regular paycheck as scheduled. I have $47.46 in cash and another paltry $4.55 in the bank -- that I would inconveniently have to get to -- to last me until then. It has been a nightmare of worry. You can't live on money like that, and I don't want to hear how someone makes it on $10 a day. Metro fare alone is $3.50 per day.
Also, that dreadful 1099 job I have had for nearly a year and a half -- after working there in nightmare-ish sweatshop infinity for the previous year -- is paying me slower than I had anticipated for my most recent biweekly climate change news summary. 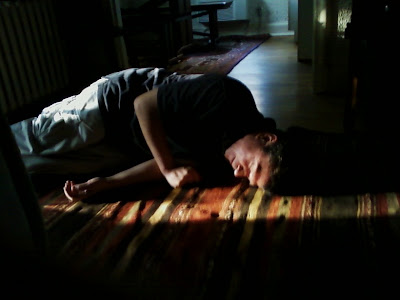 The new job itself is as dicey as can be and I'm terrified I won't have it after tomorrow or Tuesday. I have to at some point talk to my boss about my (lack of) work load and what that means. Remember: I'm only there on an interim basis for 5 months, and I don't even see how it is going to last that long at this rate. 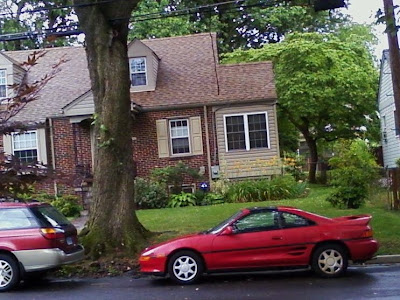 The house across the street from Quill's parents now has one of those blue glass gazing balls, Silver Spring, Md., 3:56PM, June 6, 2010.
Every detached suburban home with a yard should have a gazing ball, also known as a yard globe or garden ball.
#######

There were also other hospital issues this week for other friends -- including LP, whose mom is not in very poor physical health and took another turn for the worst tonight. I had three separate hospital email updates on Friday afternoon back-to-back. I almost never get such updates -- as in, like, once a year or less. 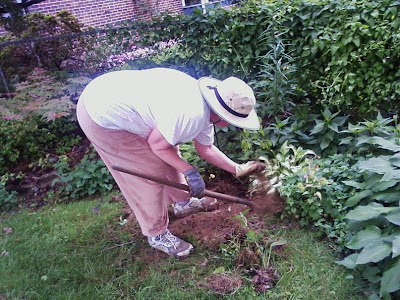 Well, actually, upon reflection, there were a few other good things. On Friday I had a nice time with Phil and Stephanie and the gang at Buffalo Billiards. This was our first time together like that since November. Gloria is back from Peru and so we met to celebrate her return.
Oh, and I took a walk on Saturday with Gary and C.T. through the nicer sections of D.C., including Spring Valley, but the sour cherry tree I have visited the past several years -- as in 2009 and 2008 (exactly two years to the day) -- in Battery Kemble Park off Chain Bridge Road had NO CHERRIES on it this time. 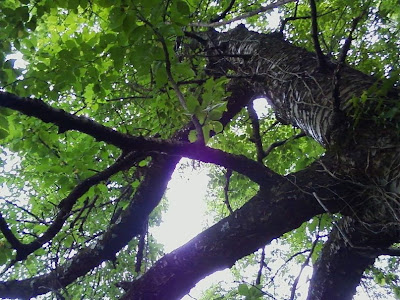 At first I thought the tree -- like the vegetative cycle overall -- was just way out of kilter and the cherries had come and gone. But I saw another one in the yard next to Quill's parents in Silver Spring, and it was in fruitful peak.
Speaking of plants, I re-potted my Gold Dust Croton plant tonight. I think it's OK, although the process must be traumatizing for the plant. 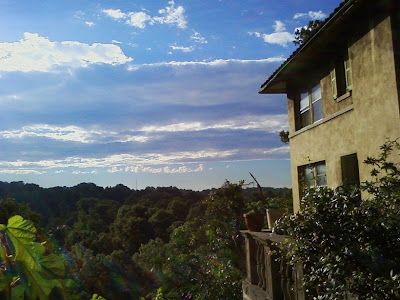 The sweeping green-cloaked vista from the 2800 block of Adams Mill Rd., NW, overlooking the National Zoo and towards Cleveland Park, Washington, D.C., 6:24PM, June 6, 2010.
A line of thunderstorms had quickly swept through earlier with a nominal amount of gusty rain and lightning and thunder. The tornado watch in effect really didn't "verify" in that there were no tornadic storms.
#######

But the weekend, or at least my mental state and bank account status, was poor. And now another week begins and it promises to be nerve-wracking as I wait to get paid -- and both fearful that and even outright disastrous if in fact the job abruptly ends. My friend Roger said -- correctly -- that I live a "fear-based" existence.
I will try to update this blog tomorrow (Monday) night, or maybe Tuesday.

glad t o hear you and phil are back to being friends again!

also, stop killing yourself with anxiety over the job.

i say - be miserable when it's justified and not a second earlier!

Yeah, why worry, we can all be dead tomorrow:-)

Karen: Stan put me on a budget. He actually expects me to live on THIS! [Handing Grace a piece of paper]
Grace: You can learn to live on this. I mean Spain does.

Mike -- Yes, we are again friends. I think things are good again.

Kristof -- I love that new picture of you.

oh how odd, I left a comment and it has gone.


I was going to say that regarding your friend, Newcastle is exactly 103 miles from Sydney. I remember the wooden sign (pre-metrics) when setting off to Sydney as i child when i lived there.

There is a train between Sydney and Newcastle, but I would be more worried about the more challenging leg of the journey...from the US to Australia! LOL.

Newcastle is quite nice, an ex-industrial town but nice beaches. A bit of an undertone of smalltown "we are the centre of the universe" but essentially it is like a giant country town in many ways.


Thanks also for your very sweet compliment: you ar very kind. And pity you for having to actually READ all that nonsense I was writng, but it all worked out in the end.

The exhibition was hoping to portray the idea of ekstatis, or going outside of the self, which is a component of a sublime experience. It was a good show.

Hope you job works out.

Thank you for stopping by -- and I'm glad to hear that the exhibit went well.

The job seems to be going OK -- I got a decent sized assignment yesterday that should carry me forward for the time being.

I'm going show your comments about Newcastle to Damom. I believe he is leaving on July 17th for there. I told him I wanted to visit him so I'll have a reason to go to Australia with a destination in mind. I'd like to go there and to Sydney.