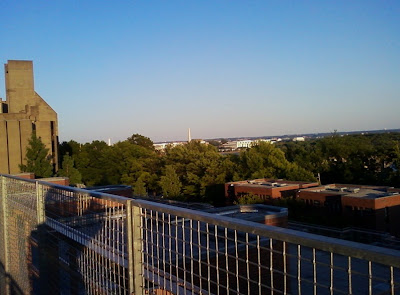 The "Village A" rooftop deck view at Georgetown University looking to the east-southeast toward downtown Washington, D.C., with the approx. 2 mile distant Washington Monument rising up into the crystal clear, breezy, cool evening blue sky, 7:27PM, May 9, 2010.
That is my shadow.

This entry features some pictures I took yesterday (Sunday) on another Georgetown walk again with Chris T. and also Gary including the top image. We went to Tony & Joe's for a little while.
On Saturday I had a nice pre-Mother's Day lunch with my mom and Ray in College Park. They drove there from Millersville rather than coming into D.C. 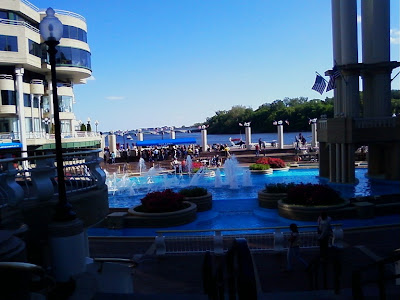 The fountains at the Washington Harbour area (yes, it's spelled the British way) in Georgetown along the Potomac River (across from Teddy Roosevelt Island), Washington, D.C., 5:19PM, May 9, 2010.
I'm glad that the fountain pool walls have been painted a bright white. Last year they were an earthen green that really didn't work -- made the fountain look like a swamp.
#######

I'm nervous about my upcoming new job and I also haven't been feeling very well lately, including recurring pulling headaches, light-headedness, and even some chest pains. Maybe I'm dying. 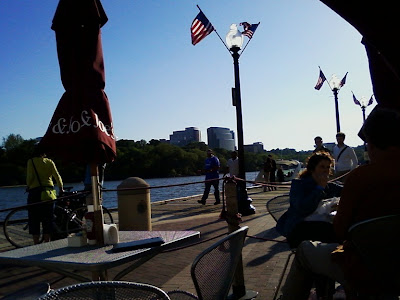 A brilliantly sunny, windy, cool day along the Potomac River at the Washington Harbour complex with Teddy Roosevelt Island and the towers of Rossyln rising behind it both visible, Washington, D.C., 6:11PM, May 9, 2010.
#######

Now I'm living in America, where freedom breathes free, and I have no health insurance at this time (a situation that should change once I get this job, or at least after a successful five month probationary period) and thus I can't get any health care except in some nightmare urban hospital emergency room. It is true that I plan (need) to do a bankruptcy later this summer or fall, and so I would just wipe out any such debt.
Ironically, my new job and salary may preclude me from being able to file a chapter 7 bankruptcy and instead I may have to file a chapter 11 13. That's not a problem I thought I'd have.

Updated: Thank you, Kristof -- not sure how I made that dumb mistake, ME of all people! 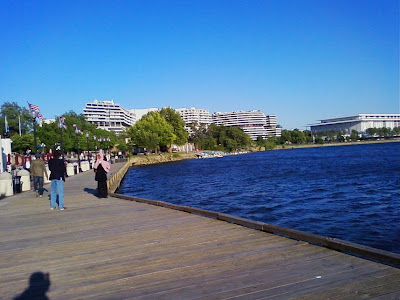 My debt includes non-dischargeable student loans (a single, giant, consolidated Direct Loan of $208,000); $1600+ in IRS debt; $3800 to LP (who lent me that much over the course of a several years and has NEVER raised the issue or let it affect our friendship); and $13,000 or so in defaulted credit card debt that was originally spread over 5 cards that for the past two years have been in the hands of various and shifting collection agencies. 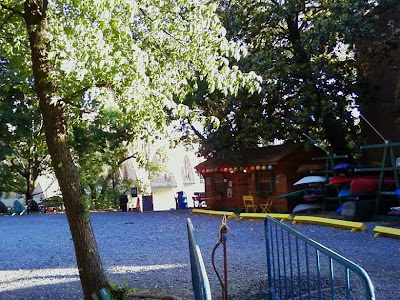 A tiny little hut of some sort next to Jack's Boathouse in the shadow of the Key Bridge -- as it spans its stately yet cavernous frame and creates a sort of urban forgotten and even vaguely ominous / creepy space-- along the Potomac River, Washington, D.C., 6:58PM, May 9, 2010.
There was a small craft advisory on the Potomac and Jack's Boathouse was closed.
#######

It is this last clump of debt I need to discharge in bankruptcy or somehow get a handle on.For what it's worth, I only actually charged about half the $13,000 amount and the rest was on interest, fees, and other arbitrary additions. I will NEVER have another credit card in my life, EVER. 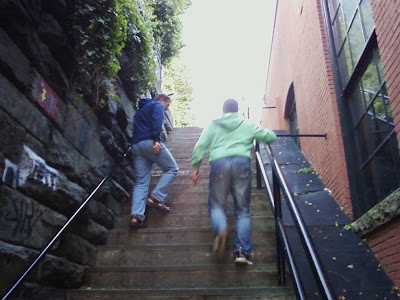 I'm still baffled why the Ebola virus like plague of the credit card hydra persists stronger than ever in America. Maybe it's because "freedom is on the grow."
That aside, at present I am only paying one of the five (a $2500 debt) -- a nominal $25 a month to a law firm in Towson representing the collection agency. I will start paying the other debts, esp. the IRS and LP debts, once my new employment begins and things settle down.
But at least millions of gallons of toxic oil and spewing into the Gulf of Mexico with no end in sight -- and the DOI Minerals Management Service (sex and drugs anyone?) ... 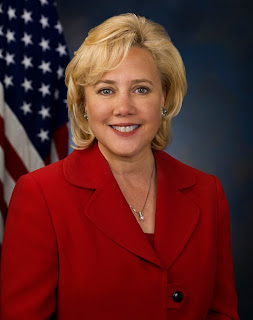 ... not to mention all those Senators -- such as the entire Republican caucus and Mary Landrieu, who sometimes looks more like the madam of a New Orleans' French Quarter brothel than a United States Senator, but these days, it's about the same anyway.

And you just know that BP and Transocean, not to mention Halliburton and every other corporate crook, will all get off scot-free. That's how it works in America. 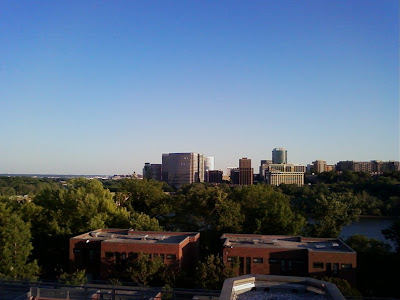 The view of the Potomac River and the towers of Rosslyn in Arlington from the rooftop deck of "Village A" at Georgetown University, Washington, D.C., 7:19PM, May 9, 2010.
Compare this picture to the one I took three days earlier and posted as the lead image in my previous entry. Also, as you can see, the sky was cloudless.
#######

Speaking of the weather, it has been very dry, sunny, windy, and cool the past few days. Rain is finally in the forecast -- starting tomorrow afternoon into tomorrow night.
Kristof told me that it has been unusually chilly in London of late. I checked the forecast versus the May normals and it looks like temps are only in the mid-50s Fahrenheit for highs and upper-30s Fahrenheit for lows -- about 10F below normal.
There is another variation of that big Atlantic block that played such a role in our U.S. East Coast snowy winter. The NAO and AO are again highly negative, esp. the NAO. 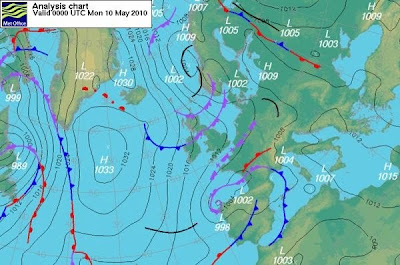 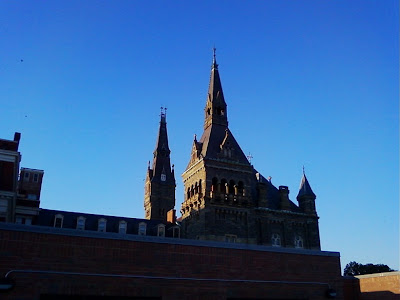 The spires of Healy Hall contrasted on a cerulean blue evening sky as seen from the Village A rooftop deck on clear, rather cool sunset, Georgetown University, Washington, D.C., 7:25PM, May 9, 2010.
#######

Speaking of climate and politics ... I saw this on Bartcop earlier today ...
South Pole Has Warmest Year on Record 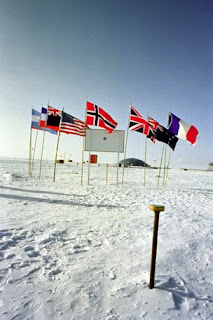 The actual geographic South Pole -- marked by a copper pipe -- a short distance from the more familiar ceremonial South Pole marker (not seen in this image).

The marker is moved periodically to take into account the motion of the 9,300 feet of ice that lies atop the entombed Antarctic continent.

"The South Pole experienced its warmest year on record in 2009, according to newly released data from the Amundsen-Scott South Pole Station.
The average temperature at the South Pole last year was still a bone-chilling minus 54.2 degrees Fahrenheit (minus 47.9 degrees Celsius) in 2009, making it the warmest year on record since 1957, when temperature records began at the South Pole, as was reported by Peter Rejcek, an editor for The Antarctic Sun, a part of the U.S. Antarctic Program funded by the National Science Foundation.
The previous record high was minus 54.4 F (minus 48 C), recorded in 2002, according to Tim Markle, senior meteorologist at the South Pole Station in Antarctica.
Last year was also the second warmest year on record for the planet, according to NASA measurements of global surface temperatures released earlier this year. The global record warm year, in the period of near-global instrumental measurements since the late 1800s, was 2005..." 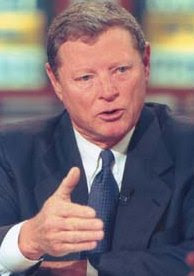 Bartcop can be very funny sometimes.

Changing subjects, the little red LED light on my optical mouse is slowly flashing. I'm not sure what that means but it can't be good. 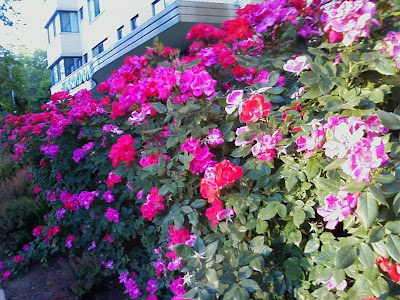 OK, that's about all for now. I have one of my biweekly climate change news compendiums to write by Thursday. I am apparently going to continue to do that even while working my new full-time job, at least for the time being.
My next planned update will be around Wednesday. 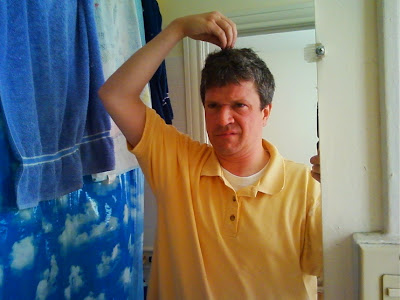 I think I need a haircut.
--Regulus
Posted by Regulus at 8:32 PM

Oh baby doll, I'm not one who should be teaching you about bankruptcy law, sugar pot, but you sure must mean chapter 13. Chapter 11 is for businesses.
Now, how do I know that? That's between me and the lamp post

OMG, now how in the world did I of all people make that mistake??

Re my text message today

here's the statmenet from Buckingham Palace

Those rituals are quite extraordinary. And while I would prefer Gordon Brown, and I realize many people are disappointed I was just explaining to Marta (The Hope and Anchor manageress'Polish girlfriend) if she thinks the Tories are bad she is right but she needs to put things in perspective. Compared to Sarah Palin, David Cameron seems almost Leninist.

Sorry, I guess I got a little excited about British politics

Kristof -- Glad you are getting into British politics as such. You are quite right to explain to Marta that "conservative" in England is basically a Nancy Pelosi Democrat, while "conservative" in the U.S. means James Inhofe and the Arizona state legislature insanity. Bartcop often follows Inhofe's name with (R - Pissquik). Not sure what that means but I like it.

Mike, Kristof, anybody else -- see this Energy Information Administration (EIA) report on U.S. greenhouse gas emissions for 2009. Cut and past the URL into a new window since this comment window is too small.

Bottom line: U.S. greenhouse gas emissions fell 7 percent in 2009, the biggest percentage and absolute drop (405 million metric tons). And the drop was NOT entirely due to a poor economy but also partly as a result of energy intensity and carbon intensity improvements.

there is a talk that betty white might get nominated for her hosting of the snl.

i kinda liked it, although i did throw up in my mouth a little bit when she was talking about her wet muffin...