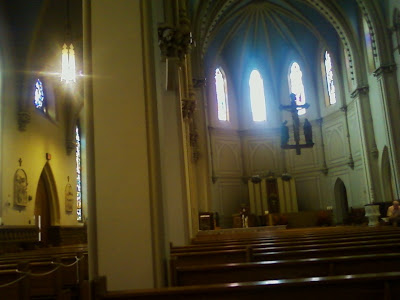 So I wanted to write a big, huge blog entry but it is already 10PM and I am VERY tired and I still need to fold my laundry. I also NEED to be in bed by 11:30PM or so as I'm exhausted tired and yet I need to be up by 6:45AM in order to be in the office no later than 8:45AM. 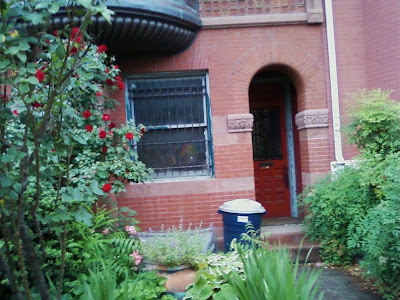 I'm also feeling a bit light-headed with some tightness in my chest. However, I often feel that way in this apartment except when I'm sleeping.
I've been watching Olbermann tonight -- he's all over the catastrophic Gulf of Mexico oil spill and the Obama administration's Bush Katrina-like indifference and paralysis with BP basically flipping off Ken "Cowboy" Salazar and the EPA. 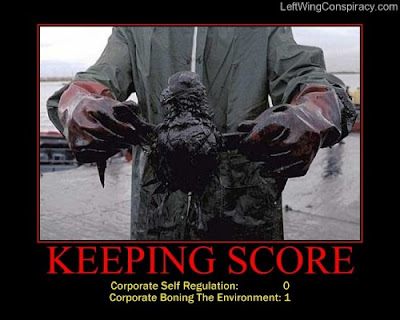 OK, where's the libertarian to spout some bullshit gibberish about how this ecological catastrophe in the Gulf of Mexico is really an example of "free markets and free minds" either "beautifully at work" or it shows a "failure of free markets" in that way that Ayn Rand warned us all about, but -- most importantly -- how ANY effort to punish BP/Transocean/Halliburton for this mess really represents a violation of that most sacrosanct and holy tenet in the libertarian worldview: "contract law." 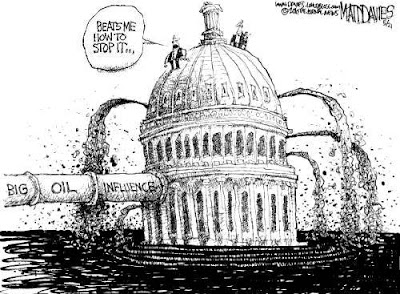 At least the GOP corporate thieves don't actually pretend to represent anybody but themselves. And corporate lawyers all over D.C. are wetting themselves over the prospect of all the money this will earn them as they establish through falsehood, lies, and injustice the principle "only the poor pay for Big Oil's spills."
Oh, and within a few weeks, we'll be hearing and reading media-whore "analysis" about how the oil spill is really "GOOD FOR THE GOP BRAND!" and how Rahm Emanuel is spending all his time on the phone dropping F-bombs at liberal House Democrats who are criticizing St. Obama for his clueless indifference.
####### 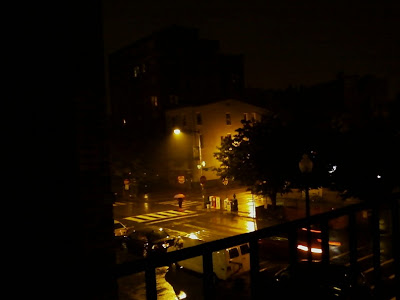 A wee hours downpour as seen from the balcony at Windows on 17th Street, NW, Washington, D.C., 2:42AM, May 23, 2010.
This entry is long enough and I'll refrain from any weather discussions except to say we are in a deep easterly marine flow. The downpour in the wee hours of Sunday dropped about 1/2" rain with more over Fairfax and Loudoun Counties.
#######

However, rather than being chronically upset, I am instead watching the Monday night parade of reruns of The Golden Girls on WeTV and later at least the first two of the nightly episodes shown on Hallmark Channel.
I'm also doing my laundry.

Click on this image for larger version. Kristof -- I think you'll find it pretty funny.
#######

Also, importantly, I actually have one of those biweekly climate change news compendiums from my previous 1099-misc independent contracting (and prior to that actual) job. I don't want to give up the assignment as it is worth $440 per issue or $880 per month.
As a result, I don't really have a lot of time to post a lengthy entry, though I want to. I managed to at least come up with the outline for the Monitor (that's its name). I can only work on it at home since I'm NOT going to do it at work. 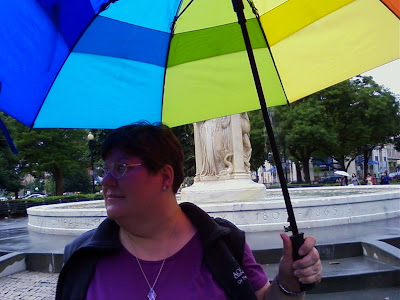 By the way, the upload interface for Blogger after an image has been added looks different -- it's weirdly blank, which is why I've been worried that my images weren't showing up. I don't want to check my blog(s) from work but I believe so far the images are there. 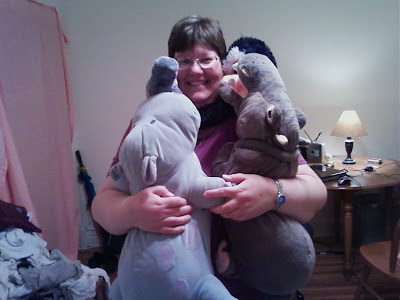 Quill holds three plush hippos -- Flippo, Harvey, and li'l Aurora (standing on Flippo) -- as well as my plush monkey Virgil. This was in my messy Wash. D.C. apt on Saturday night (May 22, 2010) with unfolded laundry on a chair, a sheet in the entrance "breeze way" and my Sunshine Buddies on the table.
#######

As for work, I managed to get to there at 8:34AM this morning -- exactly 27 minutes after leaving my apartment and after being out drinking at Cobalt and Windows last night. The first part of the day was very worrying because it really felt as if my boss were going out of her way to ignore me, but I got some needed feedback and clarity. 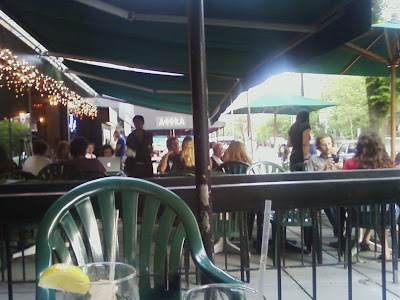 Earlier on Sunday, I went to the 5:30PM mass at St. Matthew's Cathedral. Chris T. actually joined me but got there late and sat in a different spot. I've been feeling like going to Church again lately. Fr. Jim Greenfield was presiding. I had a serious issue with him back in 2004 during my annus horribilis, but I don't feel like reliving and rehashing it. Long story short, he started to help me and then quickly turned on me during a very bad time when he realized I wasn't suitable for his Oblates of St. Francis de Sales Order (yes, I actually considered that at one time).

He is certainly a charismatic and progressive priest and orator who can make you feel good. He is the flip side of Mgr. James Watkins, who is a big, flamboyantly gay yet "rightwing" priest whose mass celebrations are basically like big operas, or maybe he's doing his Chita Rivera in Kiss of the Spider Woman.
Watkins and Greenfield are completely public figures so I don't feel any hesitation in writing these things. 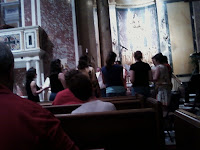 Anyway, I went to the 5:30PM mass yesterday at St. Matthew's and it was quite beautiful. The choir (near where I sat in the front but semi-concealed corner) is second to none. Some of the members and the choir director (whose name I can't recall) have been with it since the 1990s. And they sang the "Mass of Creation" version of the Gloria which is by far my favorite version.

Here is a YouTube clip (in black and white) of a church service somewhere with the Mass of Creation version of the Gloria. It was composed by Marty Haugen. A 30-second sample of it is available (I think) here.
One of these days I'll have to talk about Dan Schutte, the very gay Catholic composer, songwriter and liturgist who has written some of the best Church music. 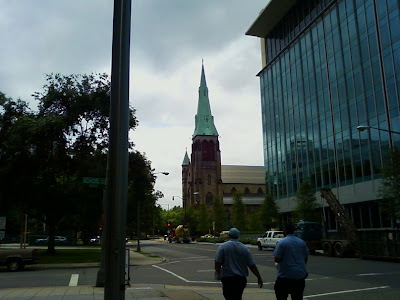 Saint Dominic Church as seen from 6th and School Streets, SW, next to what used to be U.S. DOT headquarters before the agency moved and the building thoroughly renovated, Washington, D.C., 1:21PM, May 24, 2010.
#######

Speaking of things Catholic, today I stopped by Saint Dominic Church (see above picture) in Southwest D.C. during a peaceful early afternoon. This is a church near L'Enfant Plaza -- it is the first time I've been there since 2002 when I worked at the U.S. CLIVAR Office (another failed job) when it was housed in the building at the corner of 4th Street and Virginia Ave., SW, and the small side avenue called School Street. 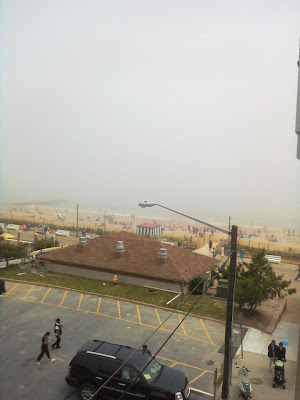 Here is a picture that Chris T. took on Saturday in Rehoboth Beach, Delaware as sea fog came rolling in off the ocean. He went there with Gary this past weekend while I stayed back in D.C.

Long story short, I worked down by L'Enfant Plaza and later at 1717 Pennsylvania Avenue (after the US CLIVAR and USGCRP Offices moved) during 2002 and then at that stupid NASA astrophysics / cosmology science writing job in 2003 during in what was the "peak" of my D.C. life before everything fell apart.

Now I'm trying to get back to where I was, or at least as a wiser and more humble and cautious person. However, I don't think I can fix certain things.

Today I went back to the Atrium Cafe in that same building. Unlike most of these Asian-run "lunch bucket" places where is there is a big hot bar filled with blah food this one is a kind of deli with whole cooked (heated) turkeys, chickens, and hams turned sliced into good sandwiches. 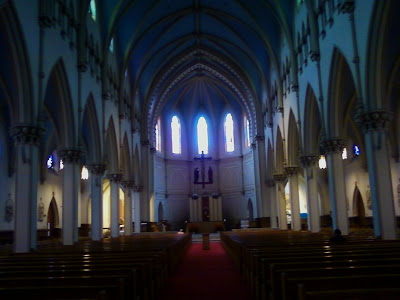 Thereafter, I went to St. Dominic for a little while. It is a vestige of Southwest D.C. before it was completed "renewed" in the 1950s in I.M. Pei's nightmare "Modernist" vision and is all sliced apart by freeways and train tracks and filled with hideous office buildings and apartment buildings that resemble some long-ago Jetsons idea of the 21st Century.
Inside the nearly empty church, you could hear the muffled swooshing roar of the traffic rushing along I-395.
After work, I actually walked home back to Dupont Circle. I discovered the short cut / back entrance out of the building that leads to what is known as L'Enfant Promenade -- itself a road to no where -- but that at its north end runs underneath DOE's elevated Forrestal Building and puts you at Independence Avenue right at the south side of the Smithsonian by the Enid Haupt Garden.
I actually met Chris T. by his office as I walked across Pennsylvania Ave., and we walked back to Dupont Circle. He told me I am in a mid-life crisis, except I think one has to have had a life before one can have a crisis midway through it. 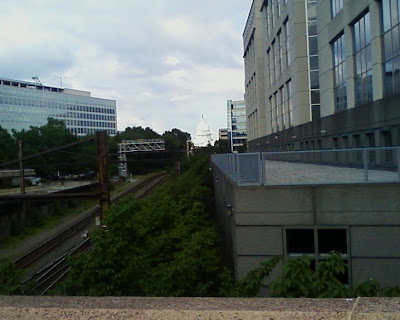 Anyway, I think that's all for now. I need to wrap up this entry. I probably won't update this blog until Friday.
--Regulus
Posted by Regulus at 8:19 PM

Oh the sweet and disturbing aura of Catholic temples! I too sometimes surrender to their magic. Although not very often.

Just last week the Archbishop of Krakow had St Stanislaus' relics brought up to the cathedral tower so they would protect the country from floods. This was reported by all major newspapers and no doubt television. While clearly Poland is turning into a medieval circus there is some dose of romanticism in that. Like a scene from Bergman's timeless masterpiece, The 7th Seal.
We should be selling tickets instead of allowing people to visit the country free of charge.

This year's Europride will be in Warsaw. I pray to the old dried-up bones of St Stanislaus' that nothing bad will happen there.

I answered your previous comment in my last entry in case you want to take a peek over there.

Yes, I was back at St. Matthew's today. The priest in question I've been talking about is a retired Georgetown professorial lecturer named Gerard Sloyan. Here is his Georgetown Web page.

So he's the one who complained about liturgy?

I read your reply to my previous comment. Hammersmoth? Ha ha, yes I was a bit intoxicated I guess.
And yes, I go shirtless sometimes but not back in the day when D was feeding me fat foods all the time. They were tasty but, boy, they were fattening.

I'll have you know that met quite a few ladies on the way who thought twice about me.
It was the second thought that put them off:-)