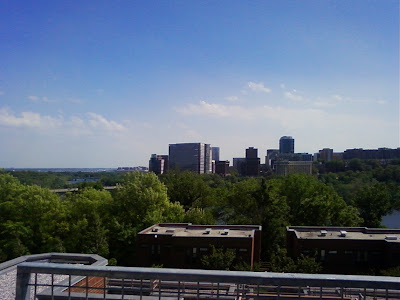 The view of the Potomac River and the towers of Rosslyn in Arlington from the rooftop deck of "Village A" at Georgetown University, Washington, D.C., 3:22PM, May 6, 2010.
There is a Village B and Village C as well.
#######

I'm sorry that I haven't updated this blog more promptly the past several days, especially as I'm not doing much this week. I'm free this week and next week ahead of the scheduled May 17th start date for my new job.
The temporary Census job has ended and I'm not doing any 1099 assignments for the Bethesda company. That work might actually be ending -- including the biweekly climate change news compendium (because the middle and one of the end clients appear not interested in keeping it going). Thus, if the DOE contracting position had not come through, I would have been through, kaput, with the 1099 one and my time in D.C. would have swiftly ended as I ran out of money immediately. 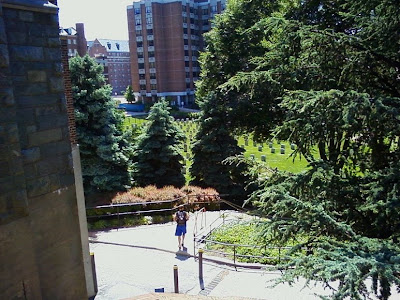 A view of the cemetery on the grounds of Georgetown University, Washington, D.C., 3:07PM, May 6, 2010.
That was a rather attractive young man walking down the stairs, but its not readily apparent at this distance.
#######

I'm actually feeling somewhat sick today with a headache and fatigued. I don't know if it is because I am just feeling very anxious and nervous -- more so than usual -- or if there is something wrong with me more profoundly health-wise.
My friend Chris T. is getting a very bad stomach bug as a result of food poisoning from something he ate on Monday night. He was well enough to take a walk with me through Georgetown yesterday including around his old alma mater of Georgetown University. But he has been hardly eating for the past few days and has lost about 12 pounds.
I'm skipping the part where we went to the Ralph Lauren store on Wisconsin Avenue. The $200 bright red pants and $150 yellow and green sweaters were all VERY SUITABLE for yachting or golfing at the country club. 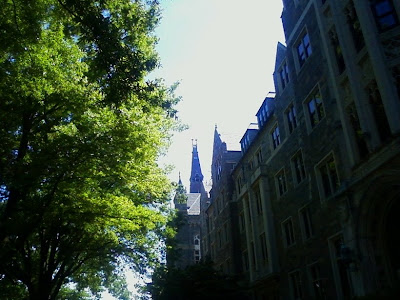 So I was quite fascinated by yesterday's stock market "flash crash" and whatever caused it. According to this WSJ report, six major companies including Exelon -- which owns the largest share of the 104 operating commercial nuclear reactors in the United States; Boston Beer Company (which makes Samuel Adams Beer); Accenture; CenterPoint Energy; TransMontaigne Partners; and IMPAX Laboratories all saw there stocks briefly (for a few seconds) trade at $0. Conversely, trading house Sotheby's went from about $34/share to $100,000/share momentarily -- giving it a notional market value in excess of $6 trillion. 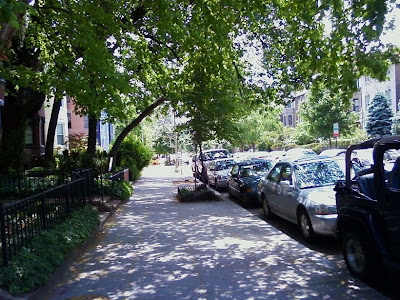 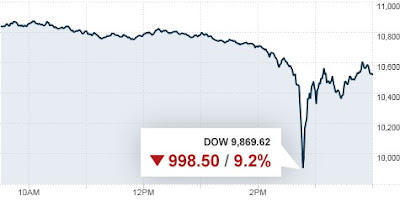 Whether it was a "fat fingers" trade that made an "m" a "b" as in "billion" instead of "million," or computer algorithm oddities, it does point out how easily the whole casino can be manipulated.
In the end, a number of these trades have been "cancelled" -- apparently any stock that moved more than 60 percent of its value during the period from 2:40PM to 3:00PM. I'm sure that will trigger a wave of lawsuits. 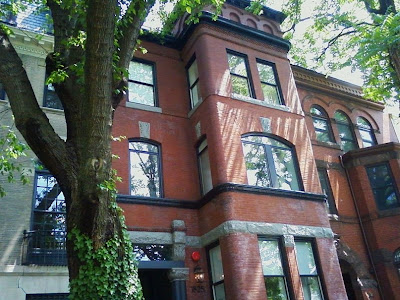 Meanwhile, in real tragic news, Greece seems to be hurtling toward default -- it's time to give up the whole stupid Euro unified currency concept, at least for the smaller and poorer EU nations -- while BP / Transocean's spewing oil "geyser" in 5,000 feet of water 40 miles off the Louisiana coast is creating an ecological catastrophe for a portion of the Gulf of Mexico.
GOP Clean Water ... 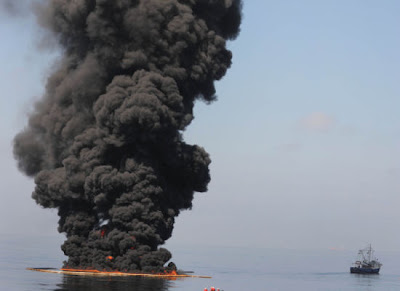 Actually, this is a controlled burn of some of the spilled oil in the Gulf of Mexico, May 6, 2010
BP will -- just like Exxon did after the 1989 spill in Prince William Sound -- walk away from this scot free, and in fact, it will probably make money with "record shareholder value." The Whore Supreme Court will also eventually rule by 2025 in BP's favor, saying its liability is just $1, and God Bless America. 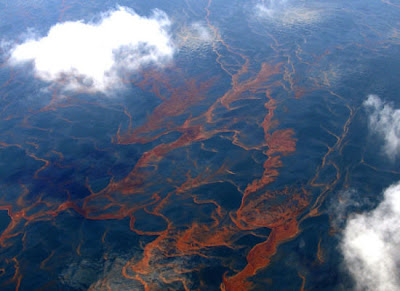 More immediately, though, expect the GOP "talking point" -- amplified by rightwing AM Hate Radio and the Fox Noise Nazis and then picked up by the "mainstream" media whores such as the WaHoPo's Howie Kurtz, Mark Halperin, Charlie Cook, and the Capitol Hill "kool kidz" gossip columnists at POLITICO -- to be that this spill really helps the Republicans and is "good for the Republican Party brand name." 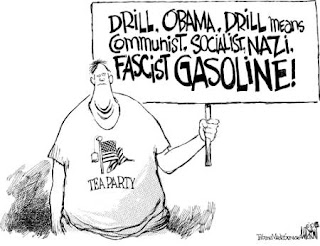 Meanwhile, Southerners and interior square staters will start clamoring for "more offshore drilling now!" and that this disaster "proves" that Obama is a "foreign Muslim Socialist terrorist" because his Kenyan birth certificate was lost on the Deepwater Horizon rig after the latter was bombed by missile-armed UN black hawk helicopters, and lets buy another 450 semi-automatic weapons for our arsenal, which the Chinese will promptly sell into the U.S. market via Wal-Mart.

America is fundamentally a nonsensical country these days. I just don't see how the Empire survives at this level of stupidity.
OK, I think I got off topic. 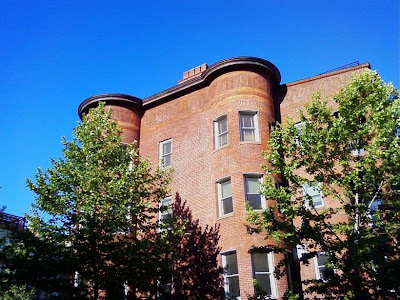 The weather has been too damn dry lately. We need some rain but none is really forthcoming for at least several days. More to the point, I think it is going to be a long, hot summer. I hate summer, except when I go to the beach or take a walk in the woods.
Given my new job, I'm actually not going to have a chance to go to Florida to see my dad, and any trip to the Jersey or Delaware shore will necessarily be very quick. 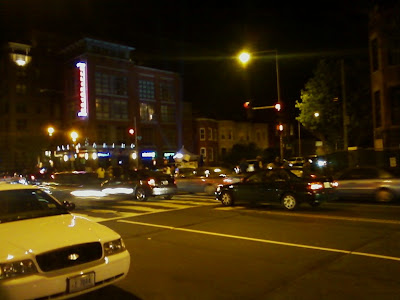 Bustling intersection of U and 13th Streets, NW, Washington, D.C., 9:06PM, May 5, 2010
It was "Cinco de Mayo" and the building in this picture is the Mexican restaurant Alero. Baltimore Searchlight Services was there with one of their truck-mounted four lamp unit, gyrating spotlights -- except it was clear and so no dancing circles of lights on the cloud base.
#######

My mom is supposed to visit D.C. tomorrow with Ray (my step dad) and we are going to the Washington Harbour area in Georgetown (yes, it is spelled the British way), perhaps to Tony & Joe's again.
This evening I am supposed to meet Joe and Ana downtown at the Black Rooster Pub for happy hour. This will be the last time I see them ahead of their six week stay in England for Joe's NASA job. I'm also supposed to meet Eric M. ahead of that at Buffalo Billiards.
Kristof -- You should be able to meet them while they are there. 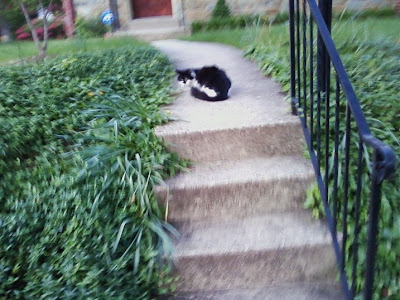 Speaking of England, given the outcome of their parliamentary elections, maybe they need the U.S. Supreme Whore Court to step in and decide things.
Lastly, this weekend is the much-anticipated guest starring of actress Betty White (of The Golden Girls and The Mary Tyler Moore Show fame) on Saturday Night Live. I'm looking forward to seeing this. Riding the Metrorail Red Line from the Shady Grove terminus station to Rockville, 4:34PM, May 4, 2010.
I was trying to kill some time between being in Bethesda and meeting Mike G, so I rode the Red Line to Shady Grove and was heading back. I was seated in the rear bulkhead car (which the train operator had left open). The window was kind of smudged and dirty.
#######

OK, I think that's about all for now. My next planned update will be either Sunday or Monday.
--Regulus
Posted by Regulus at 2:01 PM

Ha! One of the funniest text messages ever that you sent to me came last year when I was at a pub in Reading with Joe. You were mad at him for some reason and the message was hilarious (he thought that too).

As for the government situation in Britain all I understand from all this is that it has a hung parliament. Sounds good to me:-)
I'll leave it to you to quote the appropriate line from AYBS

I don't remember at all what I sent in that message.

Nothing bad. Just amusing, it was so you

Funny how Joe can travel 3000 miles and make time to see someone but not 3 miles. Tell him I said hello. Do it beatboxing style. Ha ha. How are you? I'm a wreck

(my phone has a lot of memory space)

"(my phone has a lot of memory space)"

... said in the same tone as the Pearls Before Swine cartoon ... "mom can write really small."