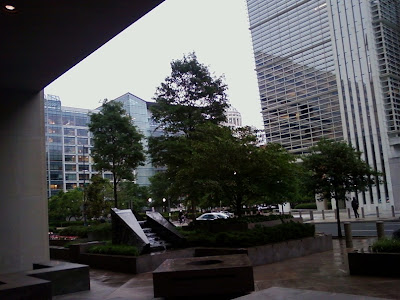 This entry was supposed to be just a quick update to say that my next planned full update will be on Friday, but I ended up writing more content than I anticipated. I also started it earlier tonight but I'm continuing it now (around 12:30AM).
I just got back from Windows and Cobalt with Gary and Gerry (Happy Birthday, Gerry!). The night is an overcast, soft, breezy, cool one with temps around 57F and an easterly flow. There was some drizzle as well and rain earlier -- for weather comments, see below. 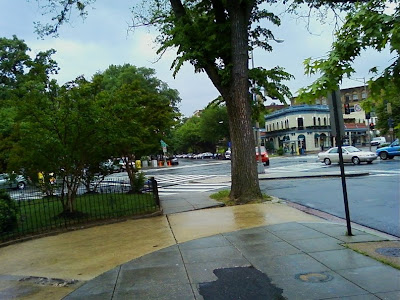 I actually have to finish one of my biweekly climate change news compendiums due by tomorrow afternoon. This is the last one ahead of my new regular job that is still set to begin on Monday, May 17th. I may just stay up all night and do it. This will also be the last time that I do that.
I had intended to finish the lead story and then do the rest tomorrow at the Bethesda office before going to dinner with the office manager, who is also my friend. 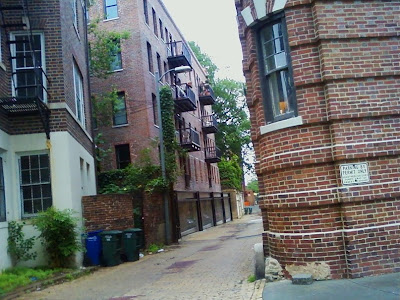 My lead story is going to be today's unveiling of the long-awaited "Kerry Graham Lieberman" climate and energy bill, now to be known as the American Power Act. Sen. Lindsey Graham was not at the roll out because of the unrelated immigration flare up and then the disastrous, maybe even catastrophic, Halliburton-constructed, BP-run, Transocean-owned Deepwater Horizon rig accident and ongoing slow motion, massive Gulf of Mexico oil spill (now estimated at 4 million gallons and rising by about 200,000 gallons per day). 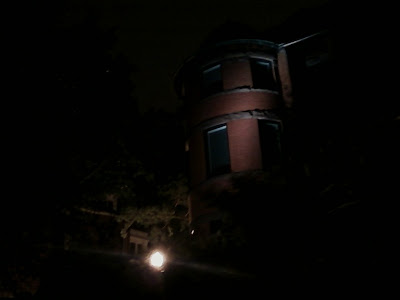 On her show tonight, Rachel Maddow mockingly noted that this rig was registered to the Marshall Islands, much like all those ancient and nasty tankers that ply the world's oceans are registered to Liberia.
Anyway, as for the bill, a 21-page summary of its provisions is available here and the entire glorious 987-page piece of legislation is available here. It doesn't appear to have a Senate bill designation yet.
Of note, Section 1204 of the bill (under Title I/Subtitle B) allows coastal states to prohibit oil and natural gas drilling within 75 miles of their shoreline (see p. 72 of the bill itself). 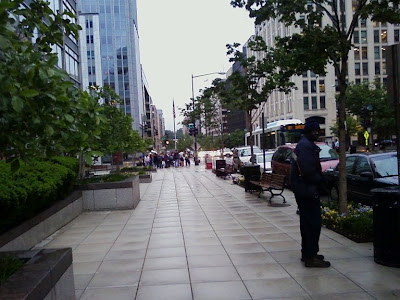 At least Sen. Mary Big Chesty Madam of the Big Oil Brothel Landrieu assures us that less than 1/1000th of one percent of the drilled oil in the past 60+ years HAVEN'T been spilled. She can tell all her Louisiana shrimp fishermen constituents and tourists who aren't visiting her state. How did she end up such a Big Oil whore?
####### 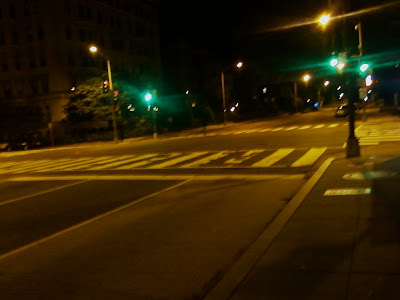 Earlier tonight we had a big cluster of showers and thunderstorms -- some with drenching rains -- moved into the Washington / Baltimore area as part of a dissipating MCS (mesoscale convective system) from West Virginia, and for a time the radar was lit up in yellows, oranges, reds and even a few magenta hues.
But D.C., and in particular National Airport being what it is, that worthless weather observation post managed to get exactly ZERO precipitation -- even though there was a brief downpour in downtown D.C. a few miles north of it.
This is, like, the fourth time this has happened in the past few months. 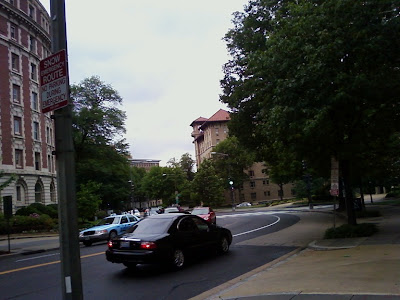 And we are running well behind for the year as well as DCA -- which makes the Capital Weather Gang dorks very pleased while the general populace mostly is just clueless. DCA is -3.95" for the year at 9.67" and -1.07" at a scant 0.34" for the month so far.
Bottom line, there are few things in life I can't stand more than that DCA rain bucket gauge, unless it's the DCA snow board and snow ruler. As for the guy who has overseen the obs there since time began, he couldn't be more self-satisfied and delighted with himself.
####### 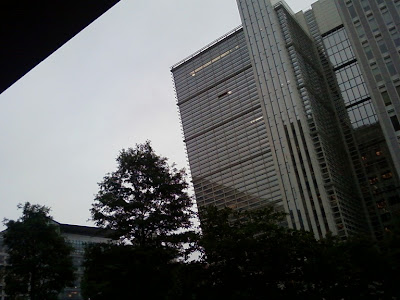 Earlier tonight, I walked downtown to the International Monetary Fund (IMF) building at 700 19th St., NW, and listened to a panel discussion entitled "From Copenhagen to Cancun: Prospects for Reaching a Global Climate Change Agreement."
The panelists included Hugh Bredenkamp of the IMF and Warren Evans of the World Bank, and moderator Caroline Atkinson of IMF. However, the big featured speaker was Lord Nicholas Stern of the London School of Economics and Political Science. I even got to ask him a question after the talk -- and this was the first time I ever used the word "Lord" as "Lord Stern" when asking a question. 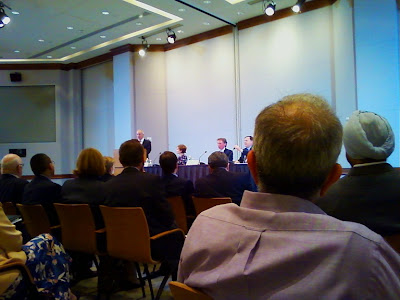 The larger topic he addressed was what the world needs to do to avoid more than a 2C average surface global temperature rise by 2100. The Copenhagen Accord commitments will simply not get us to that point.
He saw my name tag and asked me if I was related to an economist with the same surname. I said no, and was he related to the US Special Envoy for Climate Change Todd Stern, and he said no. 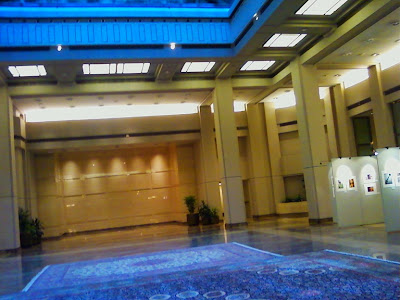 He had said during the Q&A period that he thinks there should be another Kyoto commitment period and that there still needs to be the Annex I / non-Annex I distinction. But I pointed out that Todd Stern -- representing the Obama administration position -- totally disagrees with the notion that non-Annex I nations should have no mandatory GHG reductions requirements.
**Correction: The figures below refer to "energy-related CO2 emissions" and account for about 98 percent of total US emissions. Information on total US emissions through 2008 is available here.**
I also pointed to the new Energy Information Administration (EIA) report -- linked here -- that states U.S. economy-wide GHG energy-related CO2 emissions fell by a record 7 percent / 405 million metric tons CO2 in 2009 -- and not all because of the economic downturn, and that U.S. emissions are now 10 percent below their 2005 peak. 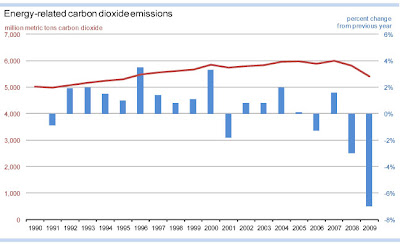 Here is a figure from that report showing both total U.S. emissions (red curve and left side) and annual percent changes (blue bars and right side) for 1991 - 2009. 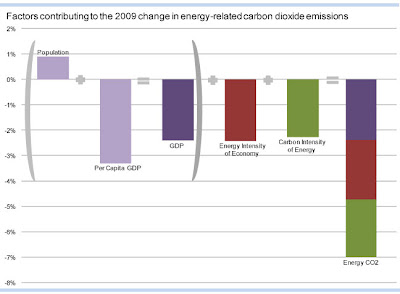 This figure shows the different factors contributing to the 2009 decline -- only part of it was "bad" in that there was a poor economy. The energy and carbon intensity changes are "good." 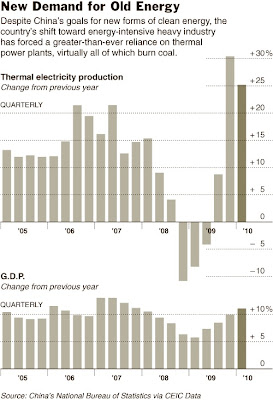 This means the U.S. is only 7 percentage points above its 2020 Copenhagen Accord target, all while China's emissions continue by all measures -- such as the 24 percent increase in its most recent quarterly electricity-generation, virtually all of which is coal-fired -- to skyrocket.

Aside from the incredibly stupid level of domestic U.S. political dialogue (e.g. kooky teabaggers, U.N. black hawk helicopters, Flat Earther denials of basic science, religio-crazed fundamentalism, etc.), this divergence between U.S. emissions and China's emissions means there will probably be less support in this country to do anything.
Lord Stern strongly disagreed that China is doing nothing and that the U.S. has really achieved anything significant -- pointing out that even with the 2020 reductions, the U.S. will still be not much changed from its 1990 emissions levels (the Kyoto baseline).
In the end, if nothing is done and the world experiences a 5C rise in global surface temps by 2100, the planet will be hotter than at any time in the last 30 million years -- before the current geological epochs of mountain-building and continental drift created the semi-permanent ice ages that have characterized most of the last 10 million years with brief interglacial warm periods. 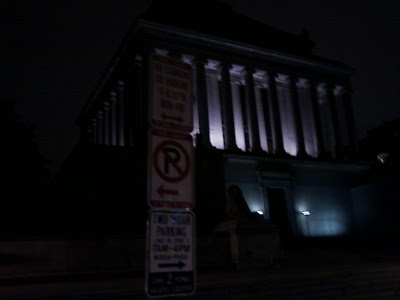 The effects of such warming on global civilization in a myriad of ways including agriculture will be catastrophic with mass disruptions / migrations of people.
He said combating climate change is also inextricably linked to economic development, esp. in the developing world. The biggest issues going toward Cancun (COP16 of the UNFCCC) are financial flows for adaptation and mitigation, technology transfers, and emissions verification. 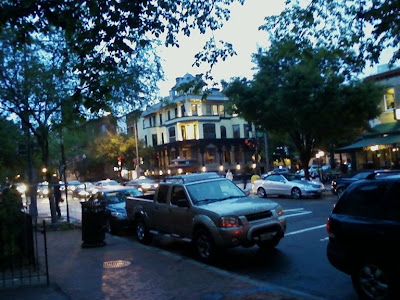 Anyway, I better end this entry right now. I talked a lot more than I had intended to. I am very worried something bad will happen to me between now and the schedule Monday start of my new job.
--Regulus
Posted by Regulus at 12:28 AM

Nothing bad is going to happen. Well, if it does it will be a minor bad as apposed to a major. That is my prediction based on events of the past 5? years. :)

Predicting slight risk of a minor bad. No chance of major bad. I like that

Thank you, Rita. I appreciate that -- and so did Kristof!

Kristof -- How did that AYBS? line go? "And a Santa Claus beckoning to the little boy"? Ha ha

Oh, yes, on a serious note, Michael Lind wrote another one of his stellar Salon.com pieces. I worship that man. I just hope he is wrong. I met him at the 17th Street Safeway once several years ago.

but you'd have to hear Mr Humphries intonation: BEckoning to the little boy.