Touched by the Tax Man, Ignored by an Angel 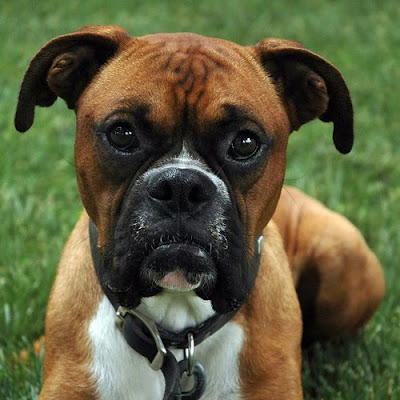 No, I didn't take this picture of this boxer -- whose lack of cropped ears and giant black eyes make him (her) look more like a space alien than an Earth dog.
However, he looks similar to the one I being walked by a lady that I encountered along the sidewalk of Columbia Rd. while walking in Adams Morgan this morning heading to the FedEx copy shop to xerox 2010 tax returns (mine, not the dogs, see below).
####### 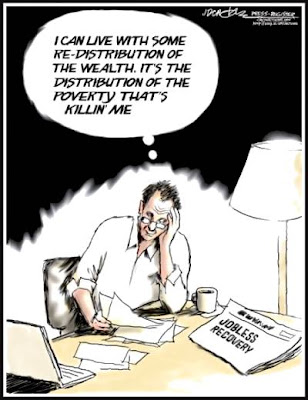 I included a somewhat lengthy (four page) hand written letter of explanation in both (not that it will do any good) and a IRS Form 9465 Installment Request. I also did not include a check to D.C. since (1) I can't pay the $171 amount (much less the $1,587.31), and (2) I want to see if the IRS accepts this and, as a corollary, what the penalty will be. 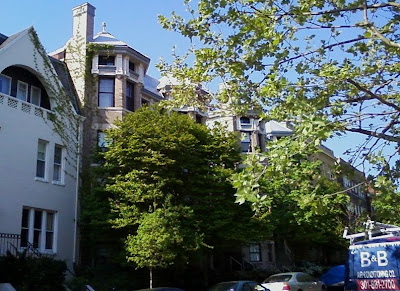 The 1800 block of California Street, NW, Washington, D.C., 10:11Am, April 15, 2010. The building with the turret like structure is The Crescent.
California Street is only one of two state-named thoroughfares in D.C. that is not "avenue," the other being Ohio Drive. The original Ohio Ave. ceased to exist and Ohio Drive is a separate road, while on old maps, California Street was sometimes shown as California Avenue. Not sure why it changed.
####### 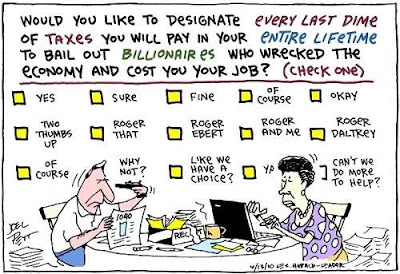 Maybe the IRS will contest my deductions and I'll owe closer to $2,000. Or maybe they'll just contest everything and I'll owe millions, or even billions of dollars, and I'll be thrown into jail, or this being America where freedom is "on the grow."
I was honest as I could be on the taxes but that will only make it worse for me. 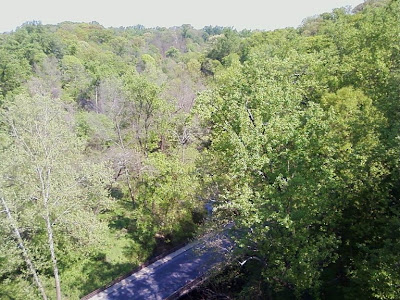 View to the north on a warm, electric green spring day from the Duke Ellington Bridge across a small part of the "great green gash" (I read that description of it somewhere) of Rock Creek Park that splits D.C. north-to-south.
#######

Most of my friends and other people I know including an ex-friend earn 5 ... 10 ... 20 ... even 30+ times higher than that. I'm SO happy for all of them, esp. the 30+ one.
Remember that everything on this frickin' planet in this frickin' reality is EXACTLY as it should be at all times. This is, after all, the Best of All Possible Worlds. 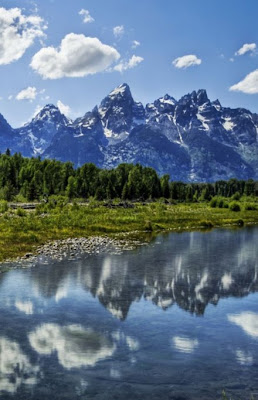 I'm also supposed to finish another of the biweekly climate change news compendiums that have been my mainstay for the past six months at my contracting job, except my supervisor is away in Japan. I just can't seem to get started on it.

Then there is another 30 page do-or-die report due. I'm so tired of this, esp. given that in the end I'm going to owe so much in taxes.
The Census job may lower my 2010 burden a bit because I'm actually paying a rather high tax amount per check right now. It would sort of balance out a bit better next year.
#######

As for the Census job, we finished preparing for the big group quarters enumeration at American University. The actual enumeration occurs on Sunday evening during an end-of-semester mandatory residence hall meeting, and I am the lead enumerator for one of the dorms. The group I'm in is a strange and disparate one that doesn't really seem to get along as a whole.
I arrived somewhat late (almost 2 hours) as I didn't leave my apt. until 10AM (which is early for me) and I had to go to the FedEx copy center on Adams Mill Rd. in Adams Morgan to make copies of my tax return and other forms and letter, and thereafter to the post office. 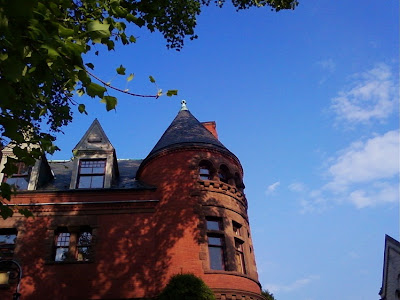 To go to a post office that was on my way to AU, I got on the Metro at Woodley Park and off at Van Ness Metro and walked up the never-ending upward incline between Connecticut and Wisconsin Avenues along Van Ness Street, NW, and thence a block over to the post office. The lady at the counter charged me $1.99 too much for a big envelope -- she charged me for three instead of two. My total came to $8.07 with postage. I pointed this out and she corrected it -- except she refunded me $1.05, or one postage equivalent, not the $1.99 for the envelope. I didn't even bother to try to correct this but just left and walked over to AU.
There were so many beautiful young people at AU -- the college boys were so hot and I feel so old. It was always like that at UMCP as well. 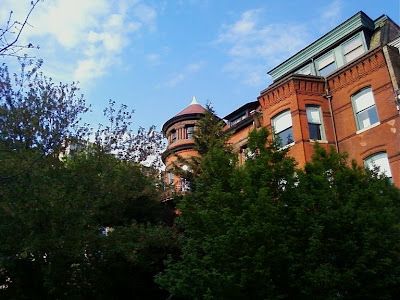 This house at the corner of R and 16th Street, Washington, D.C. -- on the southeast side of the intersection -- has always been my favorite, esp. at night when there is a light emerging from that turret.
#######

Speaking of doing census enumerations, the little hippos featured on the Hippograms blog were all properly enumerated, as explained here. I love that blog. Whoever the blogger is, he lives within, like, half a mile of me here in D.C. 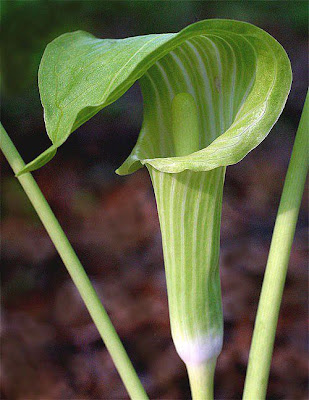 Random internet picture of a jack-in-the-pulpit, also known by the less poetic name of a bog onion.

Anyway, I'm home in my wee apartment now writing by lamp light with the window a/c (thank God for that window a/c) humming and the place feeling cool (actually, it is rather cool) and comfortable -- so much so that I want to sleep.

On TV is one of the 18 or so episodes per day of The Golden Girls reruns that I watch between We TV and Hallmark Channel.
#######

The weather is warm and springlike with too much pollen in the air and only one chance of rain in the next five days (that would be tomorrow night and it is only 40 percent). This pattern could easily morph into a hot, humid, drought-dry one of the D.C. sort I hate so much. Today temps were in the low 70s F for highs.
####### 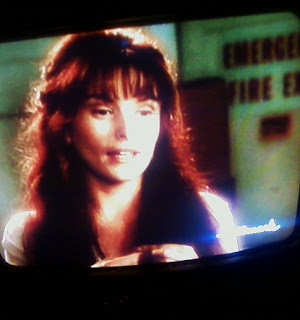 I can't even begin to watch Olbermann or Maddow tonight.

I think I'll just stick with another episode of Touched by an Angel. My dad HATED that show when it was on (not sure what he thinks of it now -- I'll ask him the next time we talk on the phone). I remember once we were in a dump of a motel in Tampa, Florida and it was on and he yelled something to the effect, "THERE'S GOT TO BE BIG MONEY INTEREST PUSHING THIS PROGRAM!"

OK, I think I just better sign off for now, Gentle Reader.

Well, gosh! I just had my taxes done and guess what? If you work for other people as a regular employee & not an independent contractor you get money back!!!!
Yay! I think I'm liking this. No more independent contracting shit for me.
Sorry about your loss...

BTW, I like the photos taken on your new camera...

there was this blog - a few year back in russian-speaking part of livejournal - written from a cat's point of view...

every entry ended with the cat peeing in some new, unexpected to and loved by the human owner place/object...

as an owner of a diabetic cat that is prone to peeing where ever hi wants - i kinda used to get a kick out of reading that blog...

Gee, Rita, that clears things up for me.

Mike -- I think I'll stick with a plush hippo blog.

By the way, do you think the eruption of the Eyjafjallajökull volcano (I'll give you 260 Icelandic krona if you can pronounce it. That comes to about $2) will affect global climate? It's my understanding that the ash cloud really didn't penetrate the stratosphere but is in the upper troposphere.

You're just being snarky now, right?
Well, no matter. You can't kill my good mood. :)

I hope the eruption won't have big impacts on climate. If I ever have to mention Eyjafjallajökull in a talk I'm screwed:-)