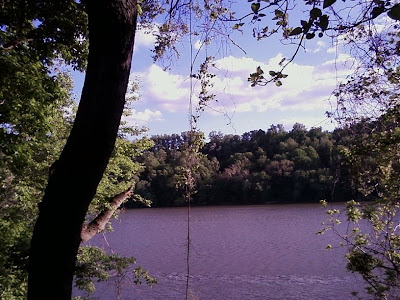 I'm just convinced that this whole thing has blown up on me. I'm sure that would titillate some types because, oh, never mind ... 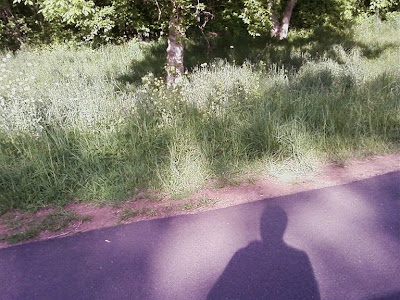 Sigh. I'm tired. And I'm so tired of this stupid contracting job crap working on assignments all night and in a mind numbing torpor all day and into dusk. It's all crap. I may have to leave here and go to Florida with my dad and vanish from this Washington, D.C., reality. 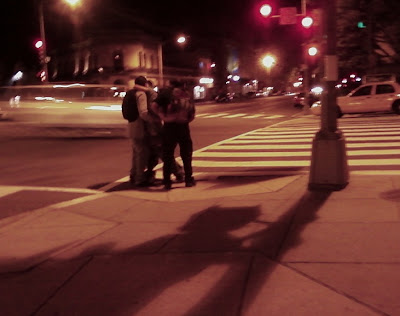 I will update this blog with the pictures I've taken the past few days including on a long walk along the Capital Crescent Trail from Bethesda back into D.C. to Georgetown and thence to Dupont Circle.
#######

Oh, yes, I've been very interested in following this Gulf of Mexico oil spill following the April 22nd explosion / fire / sinking of the Deepwater Horizon rig that probably killed 11 workers. This spill could rival the Exxon Valdez spill in 1989 in terms of ecological and economic damage. It is spewing an estimated 5,000 barrels (200,000 gallons) of oil per day with no end in site. 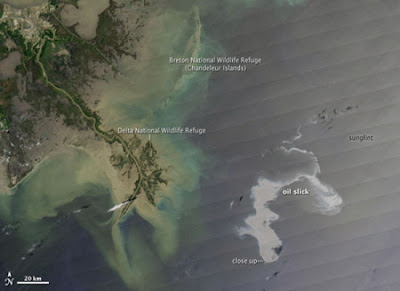 Here is a picture of the oil spill as seen by satellite. I'm not sure what satellite captured this image but it was taken on April 25, 2010. Note that the Chandeleur Islands are mostly gone -- wiped out by Katrina.
#######

The rig was located about 40 miles off the southernmost tip of the Mississippi "Bird's Foot" Delta in a section of the Gulf called the "Mississippi Canyon," specifically, Tract 252 (referred MC252). 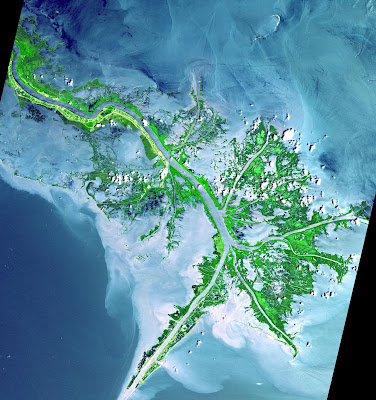 Here is a 2001 satellite picture of it (the view has changed a bit since Hurricane Katrina). The point where the river -- or what's left of it at that point as parts of it have already been diverted -- splits just above the final bit of the delta is called "Head of Passes." I never knew that. 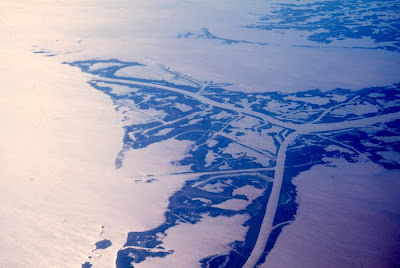 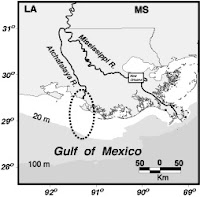 If left to its natural devices, the Mississippi River radically changes its discharge location over the course of centuries to millennia -- it has been trying to do move its discharge into the Atchafalaya River -- but it's currently so screwed up by the hand of man that it can't do what it should and the whole Delta is steadily vanishing but for the weird berm-like levees.

Meanwhile, New Orleans for slightly different reasons is sinking steadily farther below sea level and in 50 to 100 years or so (assuming the city still exists) it will be an "island" 10 to 20 feet below sea level surrounded by giant walls.
It's a whole other world down there on the Louisiana Gulf coast, though not one I really could more than briefly visit.
--Regulus
Posted by Regulus at 2:43 AM

You should stop thinking anyone wants anything but happiness for you. No matter what happens, if things are meant to be they will be. Hugs PS: Cute hippo family...

I know you are disappointed that Gustav wasn't in the picture but he was around, just not on camera.

A little birdy flew through my window just now and told me that Regulus will not be moving to Florida:-)

Congratulations! It's so richly deserved!!!!

I am very happy about this and I will do my best with this opportunity and not screw it up.

Sophia to Dorothy on what she should do at her first day of work: "And remember, you're a Petrillo, which in Italian means, 'HEY! I'M ON A BREAK HERE!'"

Yay for You! A zillion hugs & kisses for hanging in there.