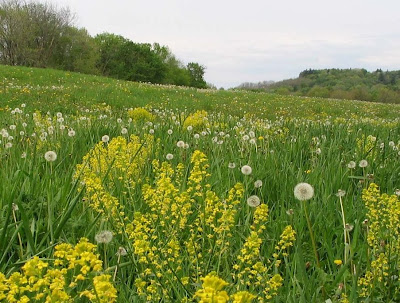 A sloping spring meadow somewhere in Wisconsin from a picture I got off the Web.
#######

Well, it is mid-afternoon on Tuesday and I still haven't heard any follow up since last Friday to my would-be job at that company in support of EERE / DOE activities. I was told by the hiring person that I would hear by Thursday, and if I had not, to contact her.
Let me just say here and now that if this were to blow up on me, I would most likely pack it in and leave D.C. by July and go down to Florida. That is my plan in the event this fails.
####### 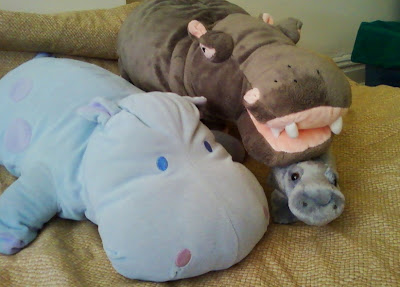 Here is Flippo, Harvey, and little Aurora. She was half hiding and we could only get her to appear with Harvey above her like this.
Welcome to the family, Aurora!

This is worth watching: Sen. Carl Levin grilling this "shitty" former Goldman Sachs partner and senior level crook named Daniel Sparks with more use of the word "shitty" than has probably ever occurred before in a formal hearing in the halls of Congress. I counted 10 times in the clip below. This came about as a result of a Sen. Levin reading internal Goldman Sachs emails from June and July 2007 describing a particular transaction as being a "shitty deal" that was nevertheless a "top priority" in terms of pushing clients to buy it.
The occasion of this clip was today's hearing of the Senate Subcommittee on Investigations, which is under the larger Senate Committee on Homeland Security and Governmental Affairs, with the head Goldman Sachs crooks.
My favorite line from Chairman Levin (at 1:20): "Your TOP PRIORITY to sell is that SHITTY DEAL."
Tourre is named in the SEC civil suit against Goldman Sachs. This man strikes me as being basically a sociopath in terms of his clueless indifference and inability / refusal to acknowledge what he did, as his testimony today reveals. 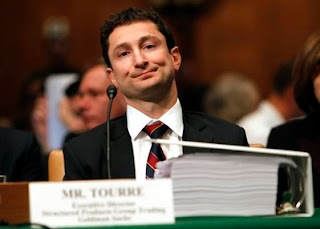 One of the witnesses was "Fabulous Fab" Fabrice Tourre, pictured here in his smug arrogance.

Ya' just wanna bitch slap him.

Recall that in 2007 and 2008 he bragged in his emails about his use of exotic financial instruments to make a financial killing while the whole financial system was crashing.

He was referring to the various collateralized debt obligations (CDOs) that represent various investment grades or bundles ("tranches") of the underlying securities, many of which turned out to be far more risky and even outright worthless, and to the "insurance" sold on certain kinds of CDOs in the form of the credit default swaps (CDSs). 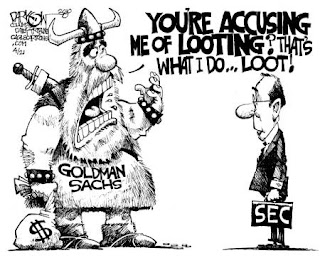 The latter basically represented the company's bets that the CDO products it was selling to its clients would in fact fail, wiping out its clients' investments while allowing the company, including its traders and partners (such as Sparks and Tourre) to make out like bandits (which they did).

This is at the heart the crime -- and because it was so massive in scope, it nearly took down our entire financial system and threw the world into a Second Great Depression. 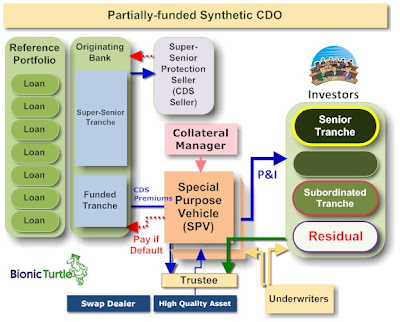 Operational diagram of a synthetic CDO, which is a type of CDO where the underlying asset (security) is not owned and instead a credit default swap is used to manage (mitigate) the risk. This image comes from a Web site called BionicTurtle.com -- which seems to have removed all its images. I got this via another blog.
Using the insurance policy analogy, you just own the policy rather than the underlying asset or maybe just another policy on the policy itself -- but one that only pays out if the first policy is wiped out because the underlying asset proves worthless. Now do this a million times over with a "notional" value of tens of trillions of dollars and you have the financial system that collapsed in late 2008.
That's how I understand it.
HERE is an excellent explanation of CDOs.

Speaking of things (un)constitutional, I'm happy to hear that there is a lot of anger and disapproval at Arizona's odious state law with lawsuits and boycotts being prepared. I mean, when you upset BOTH Linda Greenhouse AND Joe Scarborough, that's saying something. 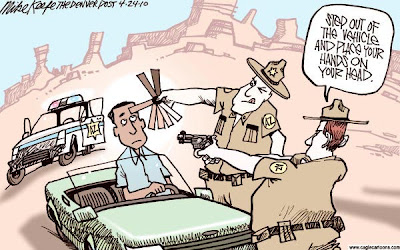 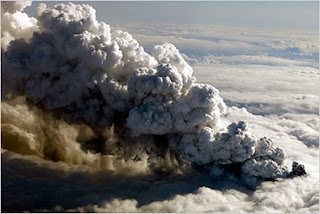 There has been much discussion in the British media that the six-day air space closure over Europe and the British Isles due to the eruption of Iceland's Eyjafjallajökull volcano was an unnecessary overreaction and that it was based excessively on the use of a single model on the part of the UK Met Office's Volcanic Ash Advisory Centre (VAAC).

The airlines are eying lawsuits or other "compensation" from the British government for the £ 1 billion in direct costs.

My own take on it -- and I think several of my friends agree -- is that the scientists at the UK Met Office / VAAC did the best they could with the information they had and were appropriately cautious and risk-adverse rather than playing with the lives of all those millions of disrupted travelers. 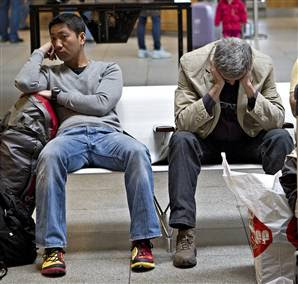 While better models are of course needed so that better risk-informed decisions can be made in future eruptions (Yellowstone, anyone??), they and EUROCONTROL acted appropriately.

Think of what would have happened if one of those jets had crashed and killed 200 or so people.
An April 26th Daily Mail article claimed that the cloud didn't even exist. The Daily Mail is basically the U.K.'s version of The New York Post.
For its part, the UK Met Office issued this press release defending itself.
#######

While there was between 0.5" and 1.1" of precip. in the past several days at DCA, IAD, and BWI, respectively, the three airports are still below normal for the month and two of the three are below normal for the year. It's not a large deficit, but it's always lousy as far as I'm concerned going into the summer months here with a precipitation deficit.
I'll post exact final amounts for April and the first four months of 2010 in a few days. 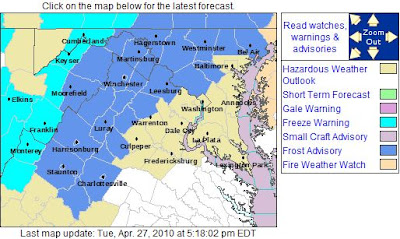 Baltimore / Washington NWS Forecast Office (LWX) county warning area (CWA) area, 5:18PM, April 27, 2010
There is a frost warning for areas north and west of the immediate Wash. D.C./Baltimore area tonight and a freeze warning in the Blue Ridge and into the Alleghenies.
Thereafter, the weather is supposed to be mostly sunny and cool with temps. around 63F tomorrow and then rapidly warming into the upper 80sF by Saturday.
#######

That's all for now. I plan to update this blog in a few days once I get additional word on the prospective job.
--Regulus
Posted by Regulus at 3:01 PM

It's Thursday.
We're all waiting for the verdict

Still no word as of 330PM this afternoon (Thursday). I will let you know as soon as I do!