Fountains of the Not So Deep and Blossoms of the Spring 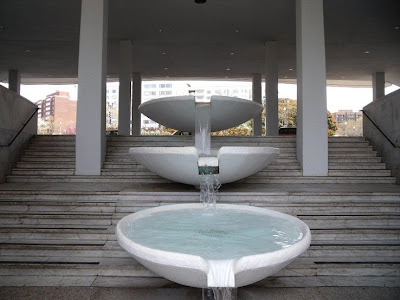 This past Monday was a bad day even though I was busy with Census related tasks during the day and tonight (until a few minutes ago) producing another report in my capacity as a 1099-independent consultant. The former was at one of the large universities here in D.C.
I had intended to update my previous entry with more pictures from my mom's Saturday visit here in D.C. and some Easter Sunday pictures from Quill's parents' house. But I didn't get around to that, nor to the April 4th explanation.
It is already 12:30AM as I start this entry and I am simply too tired to have a big, detailed entry. 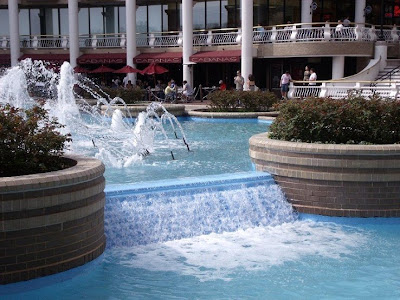 I did NOT get the job I really wanted to ... In Al Bundy-style: OF COURSE.
It was a job with one of those minority-owned contracting firms that support a particular Federal agency. At this point it really doesn't much matter if I let it be known that the agency is the Department of Energy. I would have been a contractor there.
The hiring manager at this company said she was unable to "secure" a position for me. Whatever. 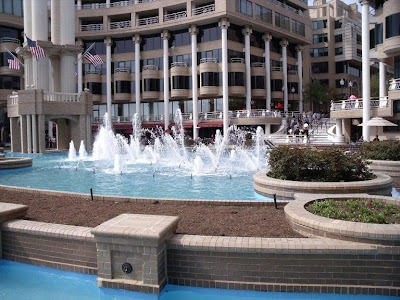 Her consolation prize was that I could be a "1099" on some intermittent and unspecified basis. I already do that for this company in Bethesda and after 15 months I'm really tired of it, although I have reached a sort of dull complacency with the current one. My mom said I shouldn't burn any bridges and instead should just ask about the pay rate, so I did in an email in which I said I am interested. I won't even talk about the frickin' tax liability.
Compounding the insult, this woman never even got back to me today after her 747AM email. 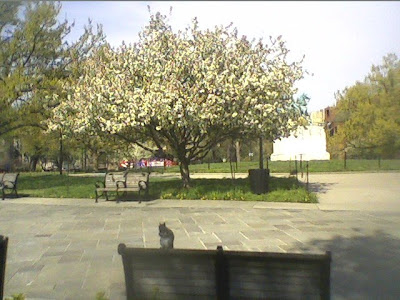 I'm flat broke and both my cellphone and cable/internet are on the verge of being turned off. And, of course, I haven't paid my April rent yet. 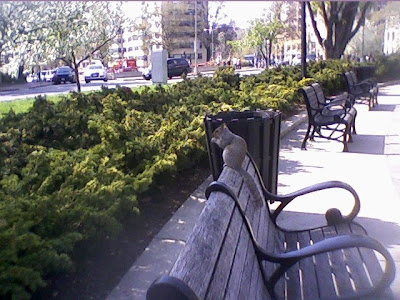 That same squirrel on the same Washington Circle bench as above, side view.
#######

Now I am supposed to get my first Census paycheck for about $350 on Wednesday. However, my cellphone finances are in areas to the tune of about $212 and it was due to be turned off tonight. I called the Verizon financial services number and the young lady said the best she could do for me was to post-date a check by one week. But then as I spoke to her she suddenly changed her mind and accepted my original offer of paying that amount off in two installments, one on April 15th and the other on April 22nd. By then I will have another $100 or so due for the next billing cycle, although I am going to reduce my peak minutes by half.
So far the phone service hasn't been interrupted. I think the 911 feature still works if it is cut off. 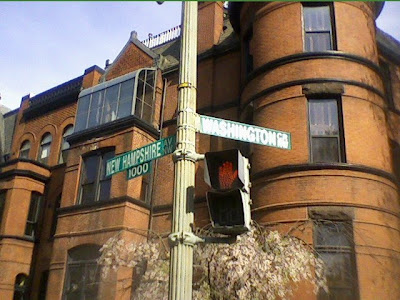 The next do-or-die bill is my RCN cable/internet bill. That has a drop-dead date of Thursday, April 8th, i.e. if I have not a payment of at least $117 by "COB" Wednesday. I just have to hope the Census money arrives. My total RCN bill is $251.
The worry for both of these is if the service is interrupted, then it becomes necessary to pay the entire amount before it is restored, doubling what I owe.
Finally, but most importantly, my April rent is due. Now I'm due $1,300 from that Bethesda company (where I worked as a regular employee before becoming a "1099" in Jan. 2009). If the office manager didn't /doesn't process the three submitted invoices even though my main manager (as usual) didn't approve them, I won't get paid for up to another 2 weeks. I would raise a fuss if that happens, though, with the head of the company (it's a small company).
If I can't pay the $993 by the 10th, I'll face a $30 late fee.

And there you have it. 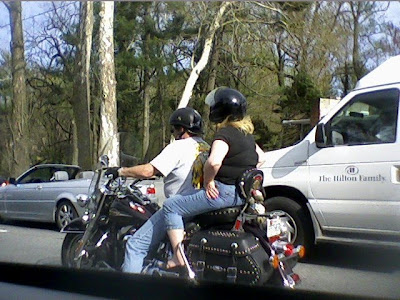 The weather has turned early summery very warm and humid with clouds of pollen dusted everything in a sickly bright green. Most nearly everyone is titillated at the weather although I don't like it. I prefer the kind we had two weeks ago.
Tomorrow I will be once again at AU in a back room affixing labels and filling out envelopes in preparation for the enumeration there. 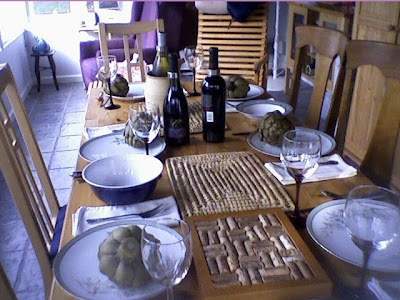 I've been watching reruns of The Golden Girls on WeTV and Hallmark Channels. I'm very tired and, obviously, I can't follow my previous routine of staying up all night. I have to be at AU by 10AM tomorrow and that takes a good 45 minutes to an hour since it isn't exactly convenient to the Tenleytown Metro. I hate the walk to Dupont Metro -- but the one to U Street when I have to do the Green or Yellow Lines is worse.
I'm hoping this Census thing works out for at least another 2 months but, truth to tell, it could arbitrarily end at any time. I do enjoy being able to go to different parts of the city. 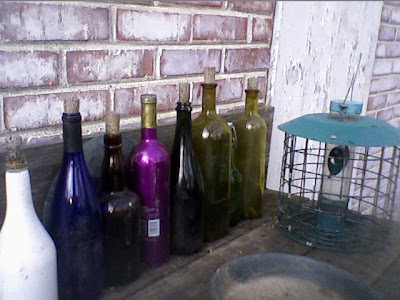 Empty bottles on a table in the backyard of Quill's parents' house in Silver Spring, Md., 6:40PM, April 4, 2010.
This house (as I have mentioned in other entries and/or on other blogs over the years) has significance to me, as explained below.
#######

I found out that Quill's brother is actually in the Mantovani orchestra, such as it exists on those occasions when it tours globally. Mantovani himself died back in 1980. He said and I too see that Mantovani type music is not nearly as popular in the U.S. as some other places. I guess America these days tends to the -- oh, never mind.
I've developed a post-nasal drip that is making me have this salty taste in the back of my mouth. At least I think it's post-nasal drip. And I'm sure it's giving me bad breath. I have a phobia about that. I chew on gum a lot. 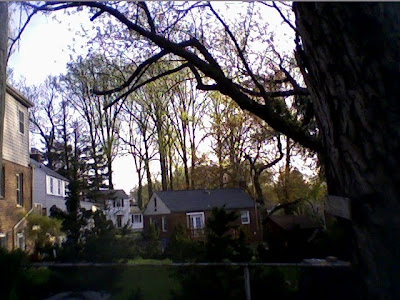 Lastly (from my previous entry), April 4th (the date of the assassination of Martin Luther King, Jr., in 1968) is significant to me personally because that was the day in 1992 -- about five months before I came to College Park -- that a group of people I was with broke down on the side of the Capital Beltway near the I-270 spur. I was with a group from St. Mary's College (what a nightmare school that was) and we were going to Carderock but never made it. I recall being in a gas station / repair shop on Randolph Road or Viers Mill Road in Wheaton. The day was a chilly, blustery one. We stopped for gas at another gas station shortly before the breakdown.
This gas station was at Four Corners -- which is right near where Quill's parents live (see above pictures). This is where I would stay for a few weeks in Sept. 1992 when I transferred to UMCP and near where I lived with Phil for 9 months in 2004 into early 2005.
Phil was in another car that long ago day but we all stopped at that Four Corners gas station.
Anyway, it was 18 years ago and I always remember that day. It was right before I came to the D.C. area. 18 years. 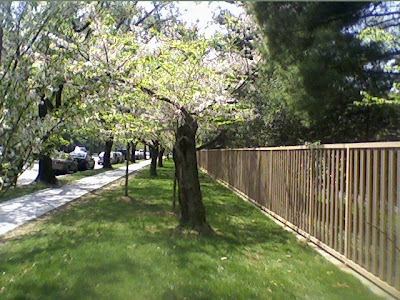 If things don't work out, I may end up having to go to Florida to live with my dad, but hopefully by then he'll be out of Flagler Beach. Back then, he was still in New Jersey.
OK, that's all for now.

Is it time for the Cherry trees to bloom again, already?

Well, I'm sorry about how the job situation is going for you. It's hard on a lot of people.

We are losing advertisers like crazy. Lots of the smaller businesses are folding. I'm hoping we are seeing the worst of it now & the entrepreneurial spirit isn't dead.
Hang in there...

I'm actually quite busy with Census work and my contracting work and have a decent amount of money (for me) coming my way, but it's just the wait while broke.

As for American entrepreneurial spirit, eh.

Do you realize it's been almost a year since Bryan died? It was last May 5th.
Wow! I think you & I are doing very good. Considering the boat we were all in.

Funny you say that ... I was just thinking about him and the impending year anniversary -- if that's what we should call it -- of his death.

The part that upsets me is that I didn't realize just how totally Bryan had given up, had become the sort of the walking dead who got through his days by being drunk. I wish I had done some things differently -- such as when he wanted to take the train down here to D.C. to visit me and the city and I wasn't keen on the idea. Maybe that would have made a difference. On the other hand, it might not have. He was farther gone that I realized and then he died in such a sudden and strange way, almost like an afterthought to all the agony he had felt.

Yes, I find it remarkable how both you and I survive and are resourceful in our ways. But I wonder if there will ever come a time when that is not the case, at least for me.

It is very difficult, for instance, when I go into the gay bars / gay urban world that I frequent / inhabit but am not a part of and see the young 20-somethings and early 30-somethings and then compare and contrast myself and all my failures that just grind away the spirit. I judge myself vis-a-vis them rather than the larger and more amorphous world.

If I were you I would probably explore that contracting work option. What workload? Would it bring sufficient income, etc.
After your initial rage subsides of course. If there are English phrases that I hate with passion this one makes the top of the list: "we regret to inform you that we are unable to secure (...) at this time". The at this time sounds particularly phony