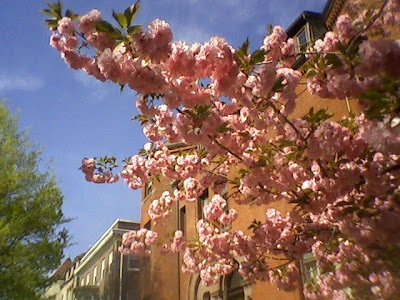 It looks like we are about to get a thunderstorm here in Washington, D.C. The radar is lit up and there is a severe thunderstorm warning in effect right now (7:51PM as I write this) and -- more importantly -- if you look out the window, the sky is dark and ominous across the miles. I'm on the 5th floor with a view to the southwest that stretches across the Dupont area and disappears into a jumble of distant buildings in Arlington (Rosslyn mostly). 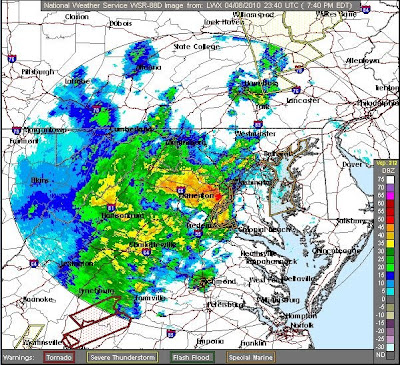 The composite mode Sterling (LWX) radar, 7:40PM, April 8, 2010
Unlike base reflectivity mode, composite mode shows internal cloud activity (or something like that) and hence looks a bit more threatening.
#######

The weather has been dreadful all week with suddenly summery conditions: temps reaching the lower 90s Fahrenheit, humidity, and clouds of bright yellowish-green tree pollen over everything. It actually reached 93F at Dulles (IAD) on Tuesday (April 6) -- breaking the daily record by 7F -- while BWI tied its record at 90F. National (DCA) reached 90F, two degrees shy of its daily record. Both BWI and DCA have a much longer weather record. 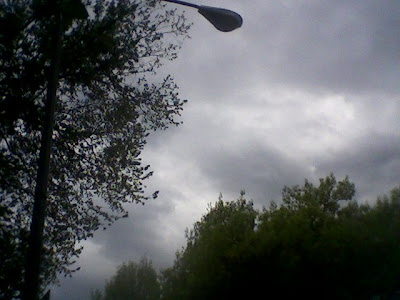 We went literally from winter to summer in about 3 weeks with very little spring. In doing so, the tree blooming / vegetative cycle appears to have sped up by a week or two and everything is is in full bloom here in the city and now into the suburbs. Even the oak trees are blooming. Everything sort of just came out at once, although the Japanese (Yoshino) cherries reached floral peak last week and now the double-flowering Kwanzan cherry trees are at floral peak this week, thus following the usual pattern.
Despite the African and/or Ebonics sounding name, the Kwanzan Cherry (Prunus serrulata) is another type of Japanese flowering cherry tree that I actually think is prettier than the Yoshino (Prunus x yedoensis), which is the signature tree of D.C. is springtime. 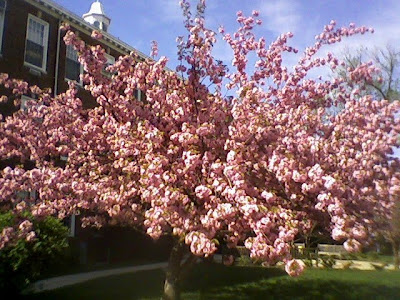 Thunder. Drops of rain hitting the metal frame of my window air conditioner, which I have turned on, of course.
7:58PM: Drenching, gusty thunderstorm with rain slashing against the windows. Clouds of flower petals from the trees tearing along on squally sheets of rain. Tops of the trees silhouetted on the opaque sky in the soft, illuminated city night swaying in the wind. Mostly, it's a drenching rainstorm than a jarring thunderstorm with that explosive cloud to ground lightning.
Naturally, DCA's final official total will probably be somewhere between "trace" and 0.02".

The rain is washing all the pollen out of the air. Thank God. I've been taking Loratadine -- the knock-off (generic) version of Claritin -- this week. 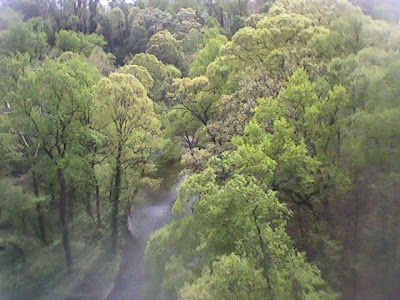 The view from the Connecticut Avenue Taft Bridge, Washington, D.C., 3:08PM, April 8, 2010.
This picture was taken with my poor quality cellphone camera as the bridge spans Rock Creek and its eponymous-named park, which is quite narrow at this point in the city, unlike farther north where it spans a few miles in width. Rock Creek Park forms -- as I read somewhere -- the "great green gash" across the city.
####### 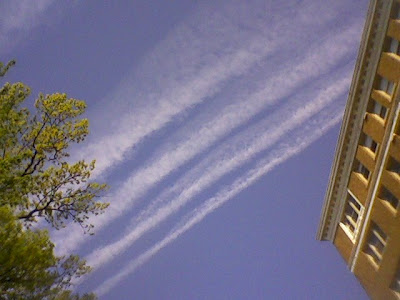 I was also able to pay my cable/internet and cellphone bills before anything was shut off. My mom helped me with the latter -- paying the entire two-month $212 amount. I sent her a check for $125 today.
I'm also going to reduce my peak minute plan from 900 per month back to 450 per month. I raised it last year because my cellphone functions as my "office" phone, as it were, even though I live in a dusty broom closet.
####### 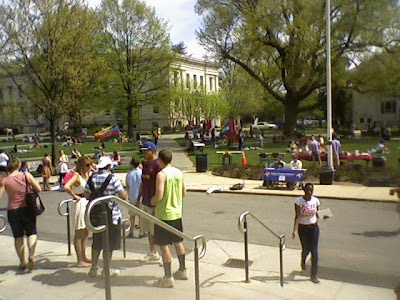 The American University Census enumeration was delayed until later next week so that assignment is on hold. The group I'm in is supposed to get another one tomorrow. I also have to finish some stuff tonight for my Bethesda 1099 job. It's the usual ridiculously detailed question.
I also have made tentative arrangements to visit the DOE contracting company office on Monday to discuss being a 1099 contractor for that place. I don't like being a 1099 again with its all tax liability, no benefits, no advancement features. The only good thing about that one is that it has the possibility of turning into a regular position. 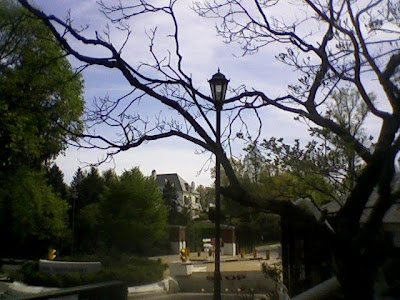 I continue to be very tired. I've not had a proper, full, and comfortable night sleep in many days. I have been getting up at 8AM lately after going to bed around 230 to 3AM. 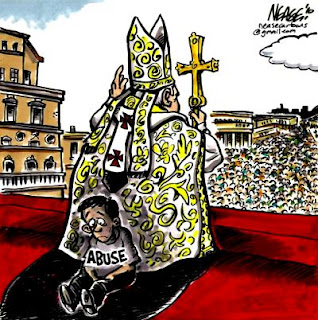 I think I'll avoid any political commentary except to say I really hope the Vatican collapses and takes down the Catholic Church with it in its present form. That won't happen, of course, but it would be nice to see this pope forced to resign in disgrace, or at least be a despised figure.

Pope Benny the Rat -- as Bartcop always calls him -- is getting EVERYTHING he so richly deserves. 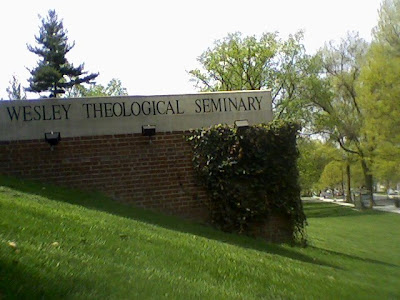 I read an interesting piece in New York Magazine about reasons for the U.S. Senate's severe dysfunctionality. It goes beyond just the radicalism of today's Republican party and looks at the institutional changes that have turned this staid, deliberative body into a kind of locked up parliamentary lower house. The article is called Mr. Woebegone Goes to Washington. 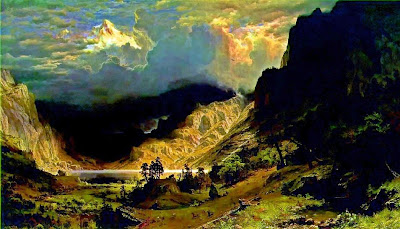 As for the West Virginia coal mine disaster that killed at least 25 people -- the worst in a quarter century in the U.S. -- the head of Massey Energy (the company that owns and operates the mine where the explosion occurred) is a truly evil man. Don Blankenship is a character right out of Upton Sinclair's The Jungle. 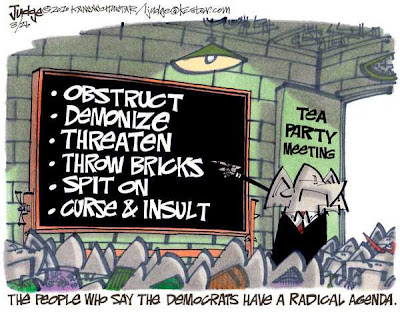 Lastly, I'm really getting tired of all these fired up teabagger whack jobs, esp. the overweight, grotesque, foul-mouthed, but ultimately pussy ones who keep making all those terrible threats to members of Congress, esp. the female ones. That is a characteristic of the political right: metaphorically (if not literally) to beat up on women, esp. those in positions of authority. 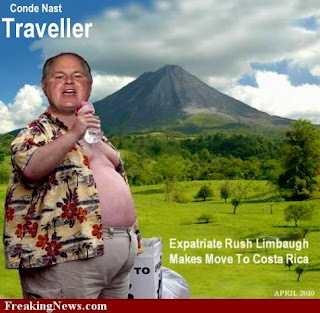 I guess in the end the carnival barkers and crazies from Glenn Beck to Sarah Palin to the Pigboy are just making too much money getting a sizable segment of the population whipped up into a mouth-foaming frenzy all based on lies and a philosophy antithetical to the very economic interests of those same people.

I believe this money/entertainment component to Hate Radio and Hate Cable really explains a lot of it
April 19th is the anniversary of Janet Reno's Waco Branch Davidian catastrophe (which did not have to happen) and the Oklahoma City bombing that apparently "resulted" from it in Timothy McVeigh's diseased mind is rapidly approaching. I'll be avoiding the gun nut rallies on the National Mall here in D.C., even more so the one in Arlington in the Commonwealth of Virginia, where its new governor apparently thinks re-fighting the Civil War is the ticket to his political aggrandizement. The Virginia one is where the lock-and-load crowd get to pack heat and parade around screaming at the air.

What a truly and profoundly depressing country this is.
There, I avoided any political commentary.
#######

OK, I think that's all for now. The thunderstorm is over but there is still some rain in the area and "upstream" in central and northern Virginia (since the precip is moving from the southwest).
Rain is good, esp. on the cusp of an early and hot summer.
My next planned entry should be over the weekend.
--Regulus
Posted by Regulus at 7:48 PM

it would be nice to see this pope forced to resign in disgrace, or at least be a despised figure.


Sigh. Would be nice. But how about our prayers are with the holy father in this time of an unprecedented attack organized by powerful enemies of Christ? Or we need to forgive and help our brothers who have fallen. I watched a panel debate with some priests on Polish TV and noticed how carefully they avoided using the word "victims" when making a single oblique reference to "those young people on whom this must be especially hard". Disqusting

Somehow I messed up your comments count again. Didn't mean to

The part that upsets me is that I didn't realize just how totally Bryan had given up, had become the sort of the walking dead who got through his days by being drunk. I wish I had done some things differently -- such as when he wanted to take the train down here to D.C. to visit me and the city and I wasn't keen on the idea. Maybe that would have made a difference. On the other hand, it might not have. He was farther gone that I realized and then he died in such a sudden and strange way, almost like an afterthought to all the agony he had felt.

I'm going to continue the thread of the conversation here instead of on the last post.
I always did feel like I understood what Bryan was going through, from my conversations with him & some revealing photos that he sent of his real life physical agonies, but it was still a shock when his life ended so abruptly. Maybe it wasn't so abrupt as we thought? On one hand I can relate to Bryans pain because I've lived with suicidal thoughts since I was a teenager, but on the other hand...my optimism regarding the potential of the human species refuses to die. Optimistically, I figure that... I, me, you, play a part in the grand scheme of things.