Celestial Stars and Earthly Fires in the Sky 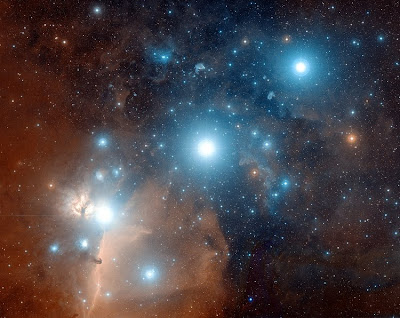 The three super-duper blue giant stars (left to right) of Alnitak, Alnilam, and Mintaka that make up the Belt of Orion. The (small) Horsehead Nebula is visible just below Alnitak. 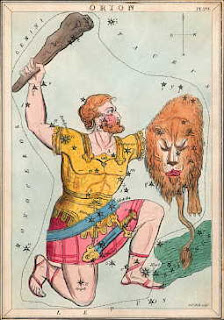 Orion as depicted in a set of constellation cards known as Urania's Mirror published in London in the mid 1820s.

Alnitak (Zeta Orionis) is a triple star system 800 light years away with the primary being a class O blue supergiant.

Alnilam (Epsilon Orionis) is a class B blue-white supergiant star about 1300 light years away that is only 4 million years old (a newborn by stellar standards) and losing mass at a fantastic rate. It will likely go supernova within a few million years.

I'm home on this Monday late night in my wee, lamp lit apartment with the window a/c purring. I'm watching reruns of The Golden Girls on We TV and/or Hallmark Channel. 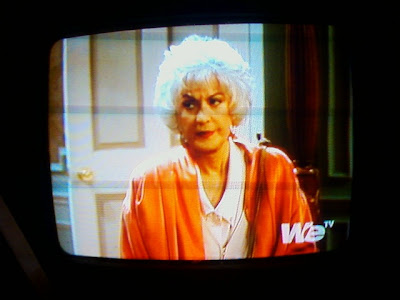 Screen shot of Bea Arthur as Dorothy Zbornak.
I really want one of those shirts that have a picture of her and say, "Don't you wish your girlfriend was HOT LIKE BEA."
#######

Last night, I finished the second of two "Misc-1099" reports I needed to write this past weekend. I worked on it all night until dawn. I also submitted the invoice for the second project (my 15-page biweekly climate change news compendium) grand total of $840. Whether I will get paid for this or not in the next few days is unsure and for complicated reasons involving office administrative and vacation issues, I might not get paid for almost a month. 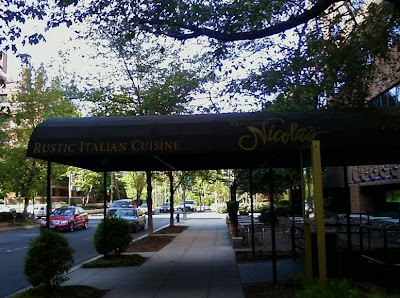 The problem is that the office manager (who is also my friend) is going away for two weeks starting this Thursday, and will be returning two ays after the next biweekly visit by the company accountant. The result would be to delay my getting paid until after May 17th (probably around May 20th).
This is, obviously, a ridiculous arrangement -- part of the ongoing farce of my daily life -- and I will go to the company head (it's a small firm so you can do stuff like that) and ask to be paid in a more timely manner. A month is simply too long to wait. 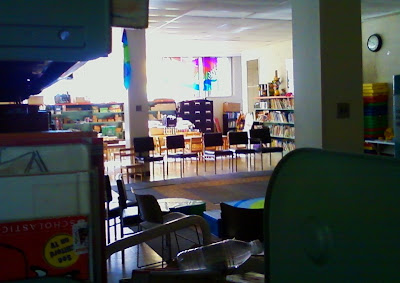 Upstairs room at the West End Library, Washington, D.C., 4:48PM, April 19, 2010. I was there today as part of the post-AU Census enumeration counting of forms. The actual enumeration is still not finished (see below).
#######

Ironically, if I do get paid the full $840 amount by Thursday and use my upcoming Census pay check to pay my May rent of $994 early, it will wipe out my money and have little for day-to-day expenses -- for my "life style" -- until next week and the next regular Census payment. It's so much better when you're on a regular pay schedule.
However, the temporary Census job as a group quarters enumerator too is highly convoluted and day-to-day uncertain. It is also probably ending this week, at least in its current form. I don't know if I will be asked to stay on as a residential follow-up enumerator for all of those folks who didn't answer their forms here in the District of Columbia. 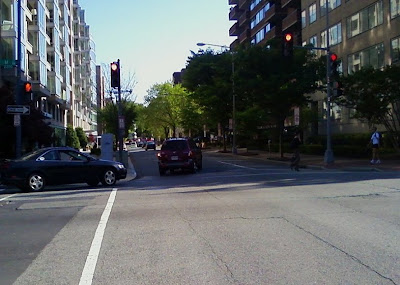 I still have not finished up the American University enumeration. The dorm for which I am responsible had a self-enumeration response rate of 57 percent and I need to boost that to 100 percent by actually getting the info from the school itself. Our group went to AU last night that was timed for campus wide "mandatory" end-of-semester residence hall meetings. The response rate was so low because so many students just skipped those mandatory meetings. This is the nature of college. 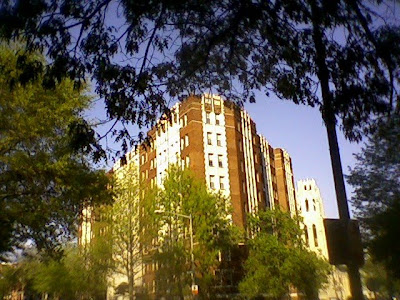 This is a picture of Wakefield Hall located in the 2100 block of New Hampshire Avenue, NW, Washington, D.C., 5:37PM, April 9, 2010. This is another William C. Smith rental building located a block from where I live. This is also one of the last photos I took with my previous cellphone camera.
#######

Beyond all this and the bigger issue is that I really can't continue this whole life I've been leading for the past year. The ridiculous tax burden (see my April 15th entry) on such a low income is just that -- ridiculous. Of course, I don't see how I could actually leave to go to Florida to live with my dad.
Anyway, turning to the weather ... it was sunny and pleasantly cool today -- although the Sun is so strong that it is warm in full sunlight. It was really nice yesterday, all cloudy, breezy, and cool, but no rain showers. There is a chance of some rain midweek but we are still in a dry pattern and there is the real possibility of a hot, humid, but drought-dry summer. 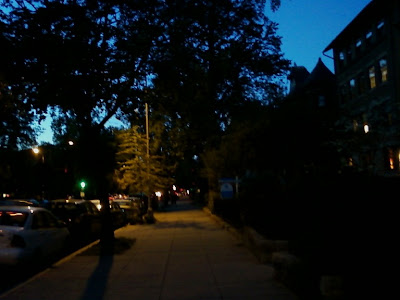 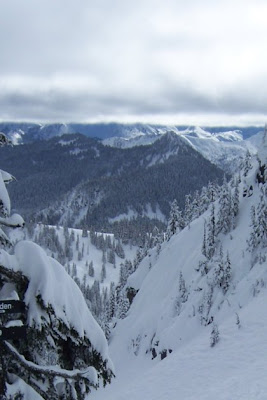 Joe Conason had a nice column in Salon about how the Republican Senate leadership works, and the implications for when a GOP Senator would actually try to do something bipartisan, only to be required to turn on the very thing he/she helped put together.

Even better was a Salon interview with environmentalist Fred Pearce on the occasion of his new book The Coming Population Crash: And Our Planet's Surprising Future.
####### 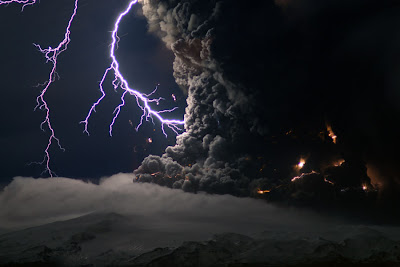 Dramatic nighttime picture of the lightning-and-fire-laced ash clouds billowing from the Eyjafjallajokull volcano in southern Iceland on April 17, 2010.
#######

A correction from my previous entry was on the pronunciation of the erupting Eyjafjallajökull volcano in Iceland. I have since corrected it in that entry. According to what the Icelandic linguist / translator named Erla Skuladottir who appeared on Good Morning America last Friday said, it is pronounced:

"EYE-a-fyat-la-jo-kuTL"
There are other versions of how to pronounce this word. 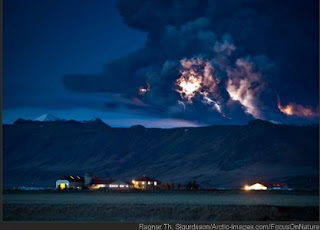 Another dramatic image of the erupting Icelandic volcano with an apocalyptic looking sky taken over the weekend.

It looks like there is some serious pressure to reopen some of the commercial passenger jet routes over Europe despite the volcanic ash -- which, by the way, may or may not have entered the stratosphere.
A friend of mine insists it has only gone into the upper troposphere. About the closed air space, I don't know if the air control authorities are being overly cautious or not. I just don't know enough about it. 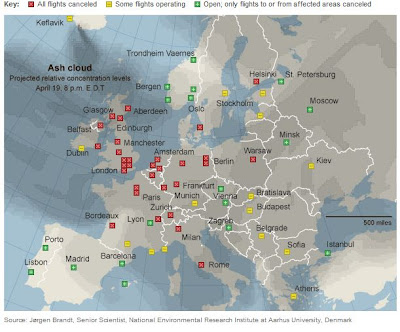 The 0GMT (0Z) 20 April 2010 (or 8PM EDT 19 April 2010) forecast for ash concentrations over Europe as issued by Jorgan Brandt of the National Environmental Research Institute at Aarhus University in Denmark.
#######

I don't recall such widespread closures and disruptions when Mt. St. Helens erupted in 1980 -- which, even though I was 10 years old at the time -- I distinctly remember, including all the coverage of how the ash cloud was tracking across the country. I believe St. Helens' eruption sent ash into the upper troposphere rather than puncturing the stratosphere, which results in global / climatic effects. 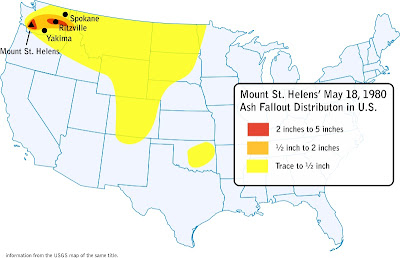 Here is what Kristof wrote me in an email about how quiet the skies over London have been the past week. He lives close to an approach into / out of Heathrow Airport: 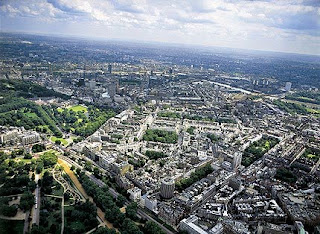 "Anyway, the sky is completely quiet over London. This is unusual. I live just north of the approach path to Heathrow where a plane lands every 90 secs. Every time I look out the window there is an aircraft. Now nothing since last week. Also, the contrails are gone. There is always a thick network of contrails in various stages of entrainment / sublimation over London. You never really see clear sky. Now we do. No spectacular sunsets though. Not sure why."

OK, I think I'll wrap up this entry now. My next planned entry will be around Friday.

Yesterday I saw a few aircraft over London. A few more today. I'm not sure if it's all back to normal yet.
Also I understand that there's a much bigger volcano in Iceland which tends to erupt following eruptions of the unpronouncable one. By "tends" I mean it's done it twice in recorded history. We will see...

Blanche: There's a thin line between having a good time and becoming an obvious, wanton slut. I know, my toe's been on that line.
:-)

I think today was the last day of the Census job -- we finished up American University, although I got 100 percent response on my particular dorm.

I went to Fox & Hound tonight with Jamie, the straight guy who is in my group. He went to Georgetown law school and has an Arabic studies degree. (As you can see, we are all slightly over-qualified for our Census job.) Jamie can drink.

Anyway, it's good to hear from you.