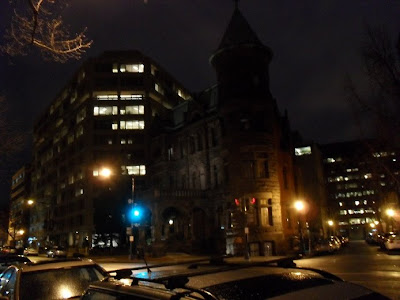 OK, I wasn't going to update this blog since I have so much stuff to do for my contracting job. However, I have decided to post the "state/local" section story I chose for my biweekly climate change news compendium.
The pictures in this entry actually came in part from the ones I took earlier tonight on my walk out of the gayborhood down to the Watergate Safeway and back. I tried to take more but the life expectancy of the batteries in my digital camera are about 4 pictures' worth. 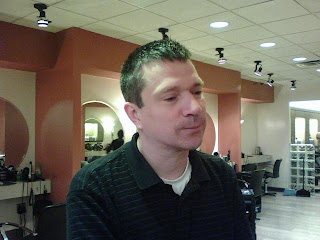 Earlier in the afternoon, I went to a downtown hair salon where Ana works and got a haircut and I am very happy with it. Here is a picture of me after the haircut. Yesterday, I went to Joe and Ana's place in upper Northwest for dinner.

The weather today into this evening was quite cool (around 48F) and persistently - intermittently showery as that big, stacked coastal low slowly spirals about centered a few hundred miles off the Delmarva. It was actually nice -- not human and gunky feeling like it can be when it rains here. 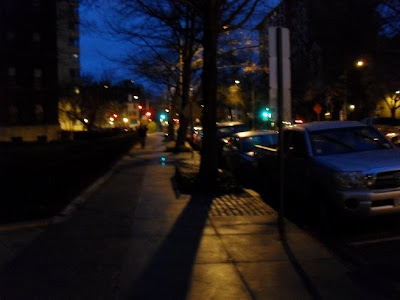 Of note, Boston got over 7 inches of rainfall in this storm and JFK Airport in Queens - NYC had a wind gust to 75mph. There have been the usual storm related disruptions in the Northeast and mid-Atlantic including flooding, downed power lines and trees, and damage.
In one sense, this storm was similar to the two D.C. blizzards in February with a stalled coastal low, only about 15F to 20F warmer and thus rain. 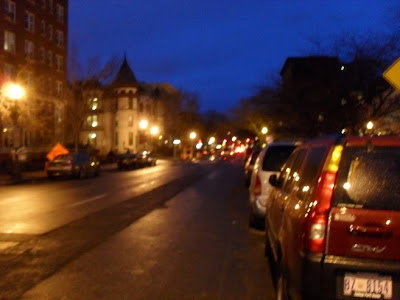 As for the story posted below, it is a bit unusual in that I basically made it obvious how I feel. Despite my opinionated self, I am actually quite good at writing those "balanced" and "objective" stories in a wire service / journalistic sense ... 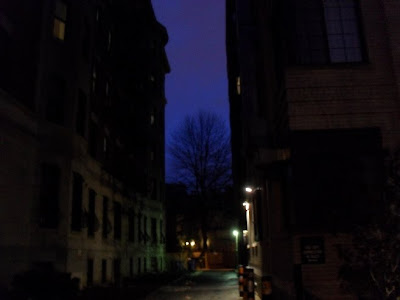 The story is about the resolutions that passed the full South Dakota State Legislature (lower and upper chambers) and the Utah House of Representatives concerning rightwing state politicians' views on "global warming." I edited it slightly from my original version. I did not even bother to touch what the Texas State Board of Education succeeded in doing after the latest round of fundie culture wars.
The Scopes Monkey Trial never ended in this damn country, or at least in Texas. Yes, I know it was in Tennessee. Ironically, I actually learned about evolution in 5th grade in ... yes ... Texas when I lived in Killeen for a year in 1981 at the age of 11. 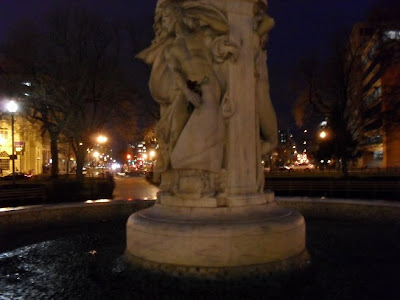 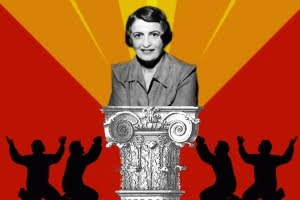 By the way, my favorite political philosopher Michael Lind wrote another excellent column on Salon.com talking about how the rise of the wacky Ayn Rand libertarian right is actually good news for progressives.

Anyway, about the South Dakota - Utah climate resolution story, my supervisor seemed to like it -- she made no changes in the final edited version. Obviously, the images below were not included in my actual report.
Still no word on the job that I really am hoping to get. 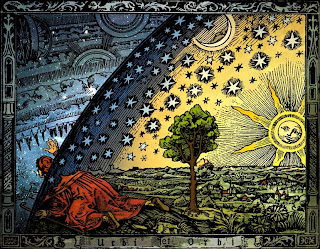 In keeping with the proud "know-nothing" tradition of American politics, particularly at the state level, both the South Dakota and Utah legislatures have weighed in on the topic of climate change and determined that "astrological" explanations should be taught and that the subject itself is part of a vast "conspiracy" designed to destroy the American way of life. Both resolutions passed in February. 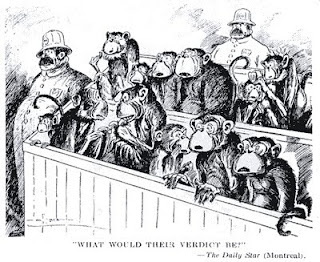 As originally passed on Feb. 17, 2010, South Dakota House Concurrent Resolution 1009 states in its preamble that "carbon dioxide is not a pollutant but rather a highly beneficial ingredient for all plant life on earth" and is the "gas of life." It also asserts the Earth has been undergoing "global cooling" in the past eight years. 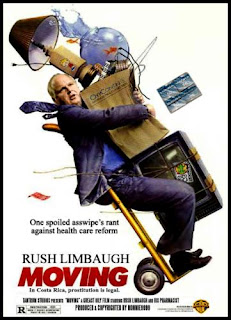 The resolution urges a "balanced" approach to teaching the topic that acknowledges there are "a variety of climatological, meteorological, astrological, thermological [sic], cosmological, and ecological dynamics that can effect [sic] world weather phenomena and that the significance and interrelativity of these factors is largely speculative; and that the debate on global warming has subsumed political and philosophical viewpoints which have complicated and prejudiced the scientific investigation of global warming phenomena … the Legislature urges that all instruction on the theory of global warming be appropriate to the age and academic development of the student and to the prevailing classroom circumstances." [1]

The South Dakota House of Representatives passed the original version of the resolution by a vote of 39 to 30. A highly revised version narrowly passed the South Dakota Senate on Feb. 24, 2010 by a vote of 18 to 17 that removed most but not all of the above language.[2] It does not carry the force of law in that it forces changes in school curricula or textbooks. 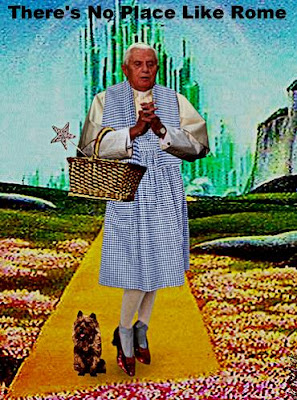 A similar themed resolution also passed the Utah House of Representatives in February. House Joint Resolution (HJR) 012 in its original form alluded to the "Climategate" scandal as a "well-organized and ongoing effort to manipulate and incorporate 'tricks' related to global temperature data" and to a "climate data conspiracy." [3] It also suggested that global temperatures have been falling since 2000 following the phase out of chlorofluorocarbons (CFCs) and that climate change is basically a "gravy train" for certain scientists.

The revised version dropped the words "conspiracy", "tricks," and also the word "flawed" in favor of "questionable" climate data.[4] It passed the Utah House 56 to 17.
The bill's sponsor Rep. Mike Noel, chairman of the House Natural Resources Committee, claimed climate change was part of a vast conspiracy to destroy the American way of life and control world population through forced sterilization and abortion.[5] It too does not have the force of law but rather expresses the chamber's sentiment on the topic.
###
Footnotes

[1] Text of original version of South Dakota House Concurrent Resolution 1009 in the 2010 session.

[2] Text of enrolled / amended version of South Dakota House Resolution 1009 in the 2010 session.

OMG. Astrological and thermological forcing of climate? Wow those people are dumb

do not brush aside astrology so fast, my friend!

when venus is in the first house transit while mars is in the opposition with gemini in neutral, do not be surprised at the uranus' ascending node!

not to mention airy triplicity!

Well Mike, if you put it that way... I only didn't get the part about myanus.

thermology is a technical term referring to a collection of wonders that occur when the newly discovered by south dakota law folks gas of life is being emitted by the intelligent designer...

I still can't get over the shock after reading that first draft. How incompetent and stupid does a person have to be to come up with a resolution like that. They made up words and I doubt if they actually know what astrology is and how bizzare that sentence sounds. This is a breathtaking height of stupidity.

Kristof, sometimes I think it helps to be charitable rather than angry when trying to understand folks like this -- well, maybe not all but some of them. There is both a profound lack of understanding and a lack of any sense of this -- in other words, they don't know what they don't know. And the GOP has done a fabulous job making them frightened that climate change is part of a conspiracy to destroy the American way of life. Throw in all the religious stuff and this is what you get.

You've got a point there. But just think about it. This is not some random musings by a bunch of nice while misguided people. This thing has actually passed a House vote. SD has come this close to having a law instructing schools to teach kids that horoscopes and thermology (which is a medical diagnostic imaging method) influence climate but CO2 doesn't. Just because elected members of the House didn't bother to check the meaning of the words they used.

How come my Blogger profile photo doesn't show next to my comments? Do you know?

Kristof, I love that picture of you. That's your new avatar?

Yes, I agree that political leaders should at least pretend to be smart, but that's not how the world works. You are from a country similar to the United States that has a tendency to have real know-nothings and dumb politicians and leaders. Not every country is like Norway or Canada.

That's exactly right. This may be why I am so alergic to this type of idiocy.

I just looked at your new avatar up close -- or as near as I could get it. Please retake the picture of you smiling. It looks like a picture taken in the fluorescent-lit office of a 1-888 tele-marketing phone bank. You're trying to sell people some time share in Pensacola or a magazine subscription. Or maybe a mug shot, baby.

I won't be updating this blog until probably Saturday as I have a ton of stuff to finish for this agonizing contract job.

Tonight was the first balmy night and it coincided with St. Patrick's Day -- which, as I recall from being in the UK nearly 20 years ago in 1991 was barely noted, much less celebrated -- so the streets were surprisingly busy and filled with drunken young people for a Wednesday night.

Was St. Patrick's day noted in England this year that you noticed?