Winter in Washington 2010: Three is a Snowy Crowd 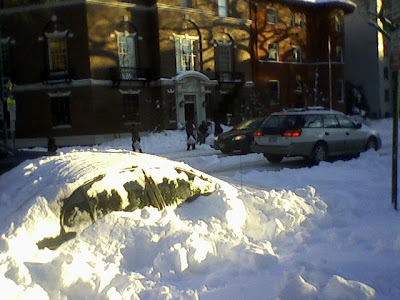 A third snow storm is bearing down on the region in this tremendously and likely historically snowy winter of 2009-2010 in the Wash. D.C. / Baltimore area. I have also listed the DCA, BWI, and IAD official stats and some storm total / ranking revisions farther below in this entry. 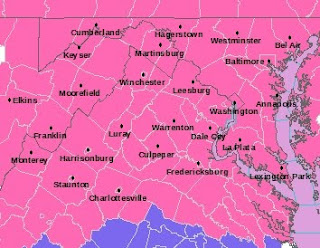 The now - familiar lavender - pink shading for a winter storm warning on the Sterling (LWX) county warning area (CFA) map, again without the captions because I can't figure out how to do a screen capture on this new computer.

For starters, while this storm is forecasted to be a major snow event in its own right, with very windy conditions as it pulls away, it should not be anywhere near the 20 to 30+ inch magnitude that so buried the region, and caused so much disruption, not to mention all the downed trees even here in the city. 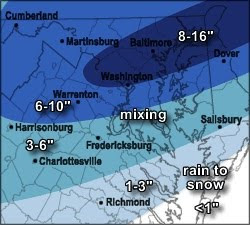 Snow totals of 6 to 10 inches are anticipated in D.C. with lesser amounts to the south and 8 to 16 inches toward Baltimore and north and east into Delaware and New Jersey. This plot is taken from the Capital Weather Gang blog.

The big issue isn't the forecasted amounts but that it comes on top of what is now 14 to 28 inches of snow blanketing the world. There is simply no place to put this snow.

The most recent (0Z) NAM and GFS models show 1 to 1.2 inches liquid equivalent that is almost entirely snow -- the NAM brings the 850mb 0C line, which is kind of a rain-snow line proxy -- briefly to the immediate D.C. area's southern and eastern suburbs. 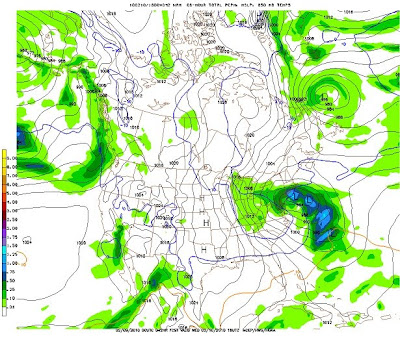 Watching the online loops of the 6 hour precip, pressure, and 850mb temps is quite interesting since it shows two low pressures sort of dumb-belling around each other right off the Jersey shore (with a negative tilt) as they rapidly deepen into a vertically stacked low that then gradually moves offshore -- the -10C 850mb sweeping off the coast and winds intensifying with the steepening pressure gradient. 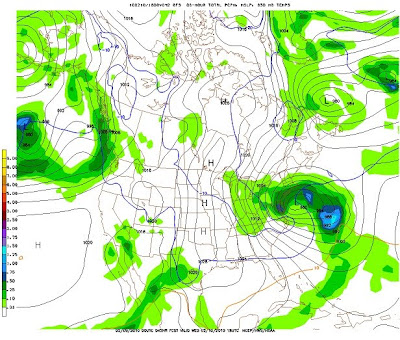 Eventually, the occluded system nearly stalls several hundred miles off New England and fills as another low northeast of Newfoundland retrogrades westward back toward Labrador. Both lows ultimately do a counter-clockwise pivot around Newfoundland back into Labrador.
The GFS (which runs out much farther) shows the two lows executing this broad loop and head back (retrograde) into Labrador / Quebec very broad loop as they fill. Both lows forward motion are apparently blocked by a big 1040mb Arctic high over Greenland. In addition to a warm ENSO pattern, this is also reflective of a negative NAO pattern. I think I'm sort of correct in this analysis.
####### 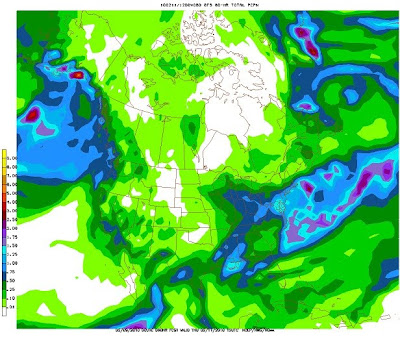 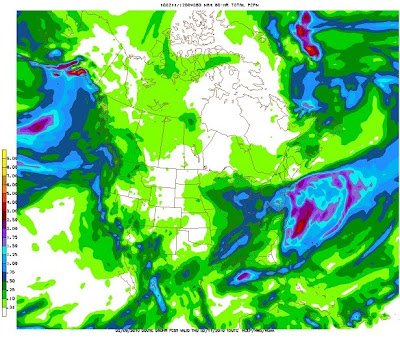 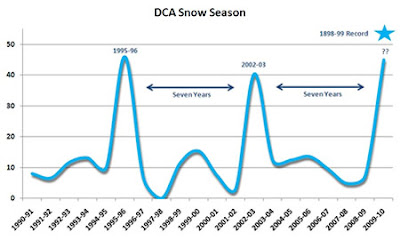 BWI is at 60.4" or just 2.1" shy of the 62.5" set in the winter of 1995-96. That record will probably fall. Baltimore / BWI snowfall records go back to Dec. 1883. IAD is at 63.5", already above the record 61.9 inches set in the winter of 1995-96. IAD records go back to Jan. 1963.
So the bottom line is that one airport already has had the snowiest winter on record and it its almost certain another airport (representing the Baltimore, Md., climate record) will achieve this and it is possible the third airport (representing the Washington, D.C., climate record) will also do so.
**These figures are correct. I had the IAD numbers listed incorrectly on my other blog.**
####### 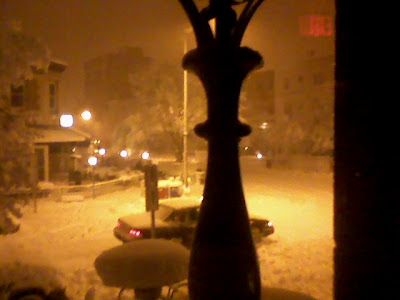 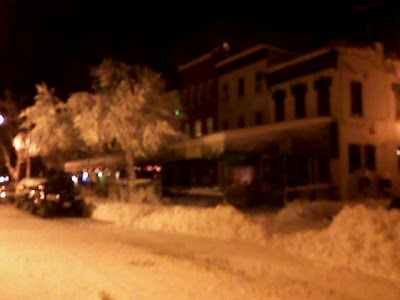 Oh, yes, here is a quick tidbit about the weekend blizzard official totals and their rankings. As noted in my Saturday entry, the totals were 17.8" at DCA or 4th highest ever for DCA/Washington; 32.4" at IAD, which blew away by 8 inches the old record from Jan. 1996; 24.8" at BWI even with the measurement issue that may result in a revision to this number.
I had thought the BWI/Baltimore total was the 4th highest based on this LWX page featuring the top dozen or so snowstorms for the three airports. 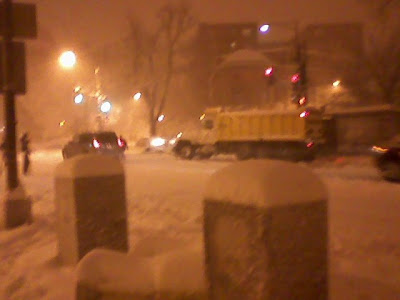 However, based on LWX's public information statement and an email exchange I had with James E. Lee, the meteorologist in charge at LWX, these top dozen or so snowstorms (which includes an instance of a tie) are actually a three-day total and in some case it includes "extra" snowfall that fell after whatever is classified as the storm itself passed. Thus, the 3-day big snowstorm numbers are in a few instances skewed upwards a bit.
In particular, Baltimore/BWI's Feb. 2003 total of 26.8" actually falls to 24.4", and thus the weekend storm vaults to #2 only behind what in D.C. is known as the Knickerbocker Storm of Jan. 1922 and its 26.3 inch total. 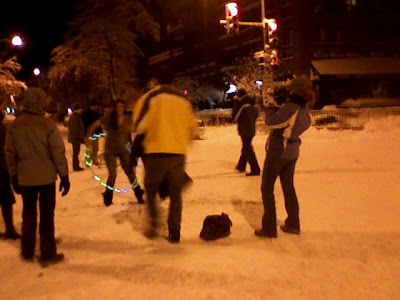 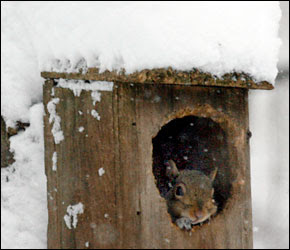 But the LWX public information statement issued gives these two as 26.0" and 19.0", respectively, as a "two-day" total (which apparently implies a "storm total"). In any event, the weekend storm remains ranked at #4 for Washington, D.C.
Mr. Lee said to me the LWX big winter storms page is soon to be updated to reflect the difference.
Oh, yes, also, in the weekend storm, it turns out Philadelphia Int'l Airport had a whopping 28.5 inches of snow -- second only to the 30.7 inches in the Jan. 1996 storm -- and my home area of central Monmouth County along and near the Jersey shore (e.g. Long Branch) had 10 to 12 inches, but just 30 miles due north in Central Park / New York City, it was basically zero. The cut off was very sharp through Middlesex County and out into Sandy Hook Bay.
###### 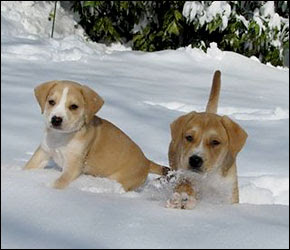 As I anticipated, the extreme snow related disruptions have basically nixed the possibility of getting a paycheck this week from the consulting company for which I do academic piece work. I should be able to get paid early next week, though, so I ought not be any later on my February rent than about Feb. 18th. I have been as late as the 20th - 22nd before.

As I have repeatedly said here, I'm not that far away from having to let go of this apartment. I hate to give up the wonderful location -- and I don't even know where I am going. I can't let myself be evicted. But I don't want to move until April, not in frickin' February, esp. this kind of winter. 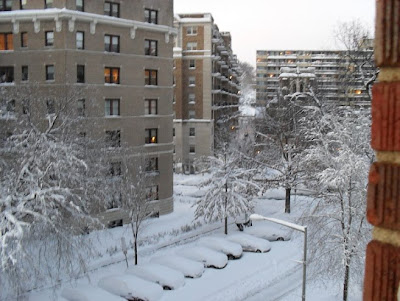 I'm low on pictures for the remainder of this entry ...
So this Monday night I was home by myself (of course) watching the line up of reruns of The Golden Girls on WeTV followed by those on Hallmark Channel. Monday nights are The Golden Girls nights on WeTV from 5PM to 1AM with an hour intermission for The Ghost Whisperer. Hallmark shows GG reruns most week nights from 11PM to 1AM. It used to show Cheers from 2AM to 4AM, but it has put on reruns of that stupid, awful America's Funniest Home Videos featuring the dreadful Bob Saget during his 1990s tenure as show host.
So instead I have on the RCN easy listening channel ... Mantovani anyone??

I keep hearing frickin' strange and/or annoying sounds in this apartment ... First it was the man upstairs hammering at 11:30PM for about 10 minutes and then it was my freezer make a loud, painful wheezing noise that I got it to stop by briefly unplugging the whole refrigerator. It hasn't started back up yet. And then there was a brief whirling sound I couldn't identify.
#######

Earlier on Monday, while shaving in the shower (which is where I have always shaved) I nicked myself just under my left nostril with my (new) razor. I have a thing about nose hair and getting up in there. I also use a tweezers, as needed once every 10 days or so. Anyway, it bled for like 45 minutes. Not tremendously but enough to be a tremendous disruption, and I was in a terrible mood anyway as I usually am during daylight hours. 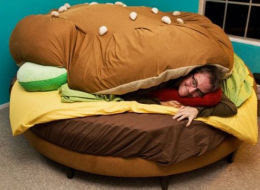 I'm not sure whether to find this "cheeseburger bed" comfy and cute or gross and disturbing.

I eventually had to lie down on the bed -- well, it's just a mattress on the floor piled with quilts and blankets and pillows, not to mention all the stuffed animals under the covers -- with head back and holding pieces of toilet issue until it stopped.

Thereafter, I made it grocery shopping. The 17th Street Safeway was out of about half its merchandise but I was able to get enough soup and basic victuals. However, there was no toilet paper. I am OK for a few days but if this next snowstorm materializes, I don't see how any of the giant grocery delivery trucks are going to get so far inside the city on snow-clogged streets.
Living inside D.C. as far as I do (at least for now), in a kind of "small gayborhood" within the larger city, there is a certain walled Medieval City quality, or modern day gay ghetto, to it. I can't explain it. Suffice it to say, mega-mall American suburbia off the 15-lane interstate this is not.
#######

That's all for now. I am going to TRY to get out of this apartment tomorrow LATE MORNING -- rather than 5PM, as it my unwanted wont. There is supposed to be a talk at the Center for American Progress -- another place I applied and, OF COURSE, never heard back from -- at noon involving Todd Stern, the top U.S. State Department climate negotiator. I haven't heard that it was canceled.
The Federal Gov't, which drives everything in D.C., is shutdown this Tuesday for a second day due to the snow and is likely to be shut Wednesday with the new snow coming. 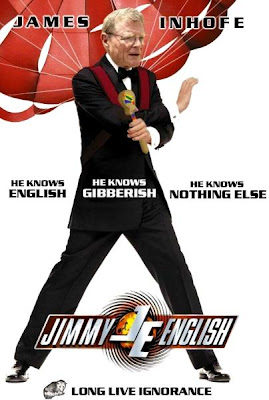 Speaking of climate change, the GOP nihilists and/or Flat Earth fundies (along with a few Red State Dems) in the House and Senate are busily trying to neuter EPA's authority to regulate CO2 and other GHGs with all kinds of proposed bills and resolutions, even though that sets up a big clash with the Supreme Court's 2007 Massachusetts v. EPA ruling.

I fully expect those bills to be fast tracked --requiring only 1 Senator for approval unlike anything progressive, which requires unanimous consent at 100 to 0.
Oh, yes, I understand the Obama administration is setting up -- unless the GOP filibusters and Sen. Reid and Senate Democrats wet themselves and cave in again, which is always a good bet -- a "National Climate Service" within NOAA.
How I would love to work for some Federal entity such as that, esp. on the policy side. Yeah, that's gonna happen. The day I hit the mega-millions lottery.
Thank you.