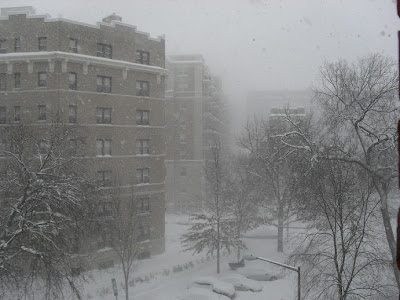 I don't even know what to say.

We are in a full-fledged blizzard across the Washington / Baltimore area. I didn't think we were even going to get a snowstorm after it turned the freezing rain and sleet for hours last night, and the radar did not look like a coastal low was bombing out right along the Delmarva. 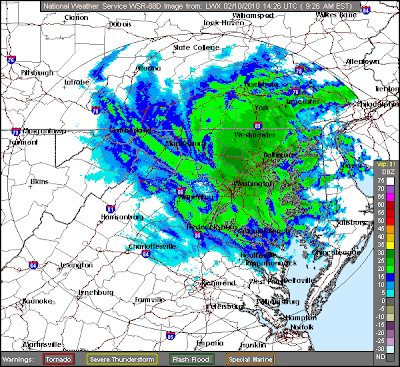 Sterling (LWX) base mode reflectivity radar, 9:26AM EST, Feb. 10, 2010. These filaments of precipitation are moving literally in every direction although the overall motion is westward. This is a very unusual situation.
#######

Well, clearly between 3AM and 9AM everything changed. The low is centered near Ocean City, Md. / Rehoboth Beach, Del., and is only slowly moving. In fact, it really doesn't seem to be moving away from the East Coast at this point.
Temps are in the low 20s Fahrenheit, winds are gusting 40+mph, and there is heavy snow with white out conditions. This is an extreme and life-threatening weather situation across the region on top of the large amount of snow that fell last weekend. The area is going to be shut down until Friday, and possibly the regular world won't resume until Monday -- and thus it will have been shut down all week. I have little food in my apt. and will need to venture outdoors to a store at some point. It sucks living alone in this weird urban isolation. 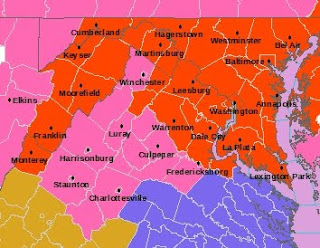 This is a true blizzard -- meeting the definition of it and an unusually large area is in a blizzard warning at the present time as this map of the Sterling (LWX) forecast area shows, all of Maryland except Garrett County.

To the southwest of the immediate D.C. area, there are winter storm warnings and south and east into the Virginia Tidewater area are winter weather advisories. 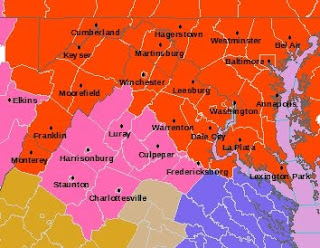 OK, in the time I wrote this, the blizzard warning was expanded to include Garrett County, so the entire state of Maryland (including the Eastern Shore parts not visible on this map) are in a blizzard warning. I've never seen that in my life.

Most of New Jersey, southeastern Pennsylvania, and the New York City area are also in blizzard warnings. 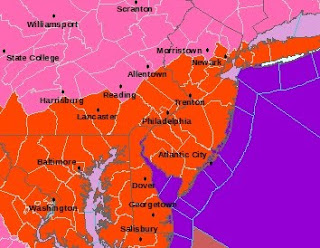 Here is the Mount Holly (PHI) and New York City county warning areas as of 10AM this morning. The offshore purple represents storm warnings, which is a notch above gale warnings.

DCA reported 5.1 inches of snow through 7AM, so it is probably up to 7 inches now. We needed before this storm 9.1 inches to set a new seasonal snowfall record, and I would be surprised if we did not do that for the snowiest winter ever in Washington, D.C., including pre-DCA records (prior to 1941). Baltimore had 5.2 inches of snow by 7AM and it is already in new record territory, as was Dulles, which had 4.0 inches by 7AM. 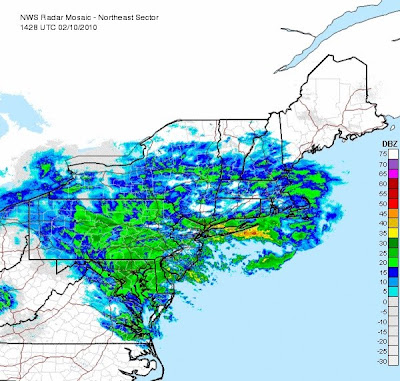 The snow cut-off line is only about 50 miles southwest of D.C. but the way the radar trends look it could continue like this for the next six hours. 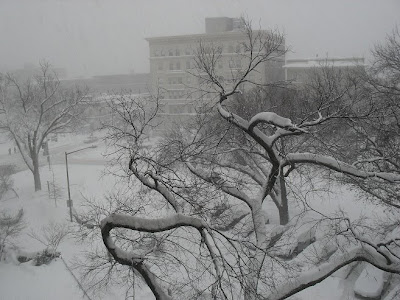 I need to go outside at some point to get some more groceries, or at least something to eat. Enough snow.
--Regulus
Posted by Regulus at 9:26 AM

The low is centered near Ocean City, Md. / Rehoboth Beach, Del., and is only slowly moving. In fact, it really doesn't seem to be moving away from the East Coast at this point.

It looks like it doesn't have where to go for now. There is a large high press area over the ocean extending from Greenland to where I live.
The AO index is back to where it was in the end of December, i.e. off the scale. This is very interesting while it might be deadly for some I'm afraid

oh I was thinking of the low that's north of your low. That's because I'm looking at stupid Met Office regional maps

You have the right idea. The North Atlantic Oscillation is in a very negative mode with a block over Greenland. I believe that combined with the strong El Nino is what is fueling this stormy winter. As for this particular storm, it is kind of a snow-hurricane that is backing up westward (retrograde motion) into the mid-Atlantic.

right, NAO is derived from pressure gradient between two specific locations while AO looks at larger annular area. For all intents and purposes they give the same result. I need to find out if there was a major stratospheric warming some weeks ago. Strong negative NAO s often preceded by one of those. I must have read like a dozen papers on that last year. It's not well understood very hot research topic. Pretty cool.

you better stack up some food while you can. It will be like Poland in the 80s over there

The pictures are very nice.

Kristof, baby doll, please don't comment on that text I sent you in this forum. I love you, Kristof. I miss you.