A Good Job Interview and an Architectural Tsunami 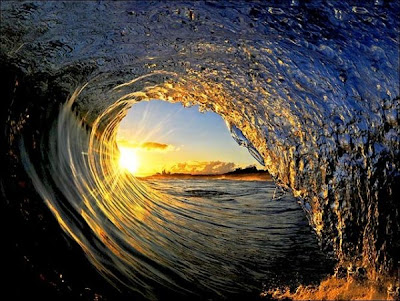 I meant to update this blog last night but I met up with Gerry, Jamie, and Gary and went to Cobalt, and then I didn't get up until ... late ... never mind the time ... and watched the news coverage of the tsunami approaching the Hawaiian Islands as a result of the deadly 8.8 earthquake that struck Chile earlier today near the city of Concepción.
The tsunami appears to have been relatively small -- just a few feet "tidal" surge -- both around the Hawaiian islands and the southern California coastline. It may have been worse for American Samoa.
###### 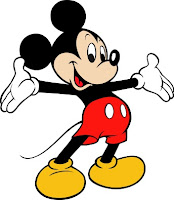 Gerry saved me once again from my never ending computer issues by getting me a new mouse after my old one with the track ball -- the mouse left over from my dead Dell computer I lost in late December -- fell on the floor and stopped functioning in a usable way. The new one is an optical mouse.

OK, so the job interview yesterday down by L'Enfant Plaza went very well. This was just the first part, though. The second part of this process is that I need to send a number of my writing samples by email by Monday, and the third and most critical part is I have to be matched up to a relevant position. It is a contact position at a Federal agency.
L'Enfant Plaza, by the way, is a soulless, dehumanizing urban wasteland of large, impersonal, ugly 1960's buildings, a spaghetti maze of freeways and overpasses slicing part Southwest D.C. from the rest of the city. 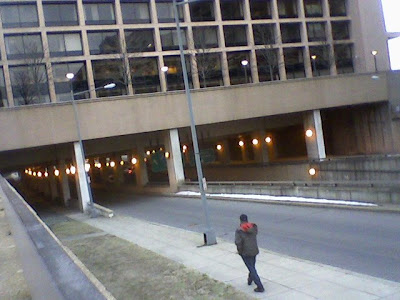 L'Enfant Plaza where what I believe is 9th Street dives under the complex itself in some ghastly tunnel resembling something from that movie THX 1138.
#######

Many, many architectural, urban design, and resulting cultural crimes of a most serious nature were committed there. It's a mortal sin, really, that will take at least another two generations to undo.
Whoever* conceived and designed that decades ago if still alive should be imprisoned in an urban ghetto for life, one cut off by impassable freeways, no sidewalks, concrete "plazas" that devour space and time, enormous buildings that block sunlight much of the day, no trees, no access to anything green or natural, a kind of hybrid Soviet - North Korean nightmare. 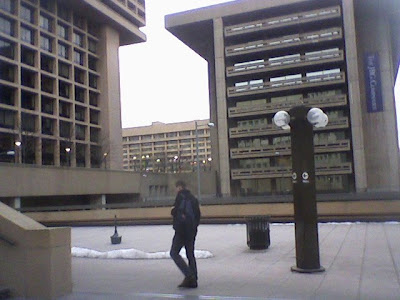 More L'Enfant Plaza time-and-space-and-humanity-devouring architectural abominations and desecration of all that is good, 4:35PM, Feb. 26, 2010.
#######

*Apparently I.M. Pei himself designed the L'Enfant Plaza complex (I did not know that) but I am referring more to the whole area of Southwest D.C. and the "urban renewal" policies that resulted in its being transformed into what it is.
I don't know enough architectural history to know if L'Enfant Plaza stems from the "internationalist" or "brutalist" school of architecture or whatever it was that gave us the urban ghetto high rise social catastrophes of the mid-to-late 20th Century and freeways that sliced apart cities ... Le Corbusier and that fucking "form follows function" Modernist fascism.
I just know it's an urban disaster. 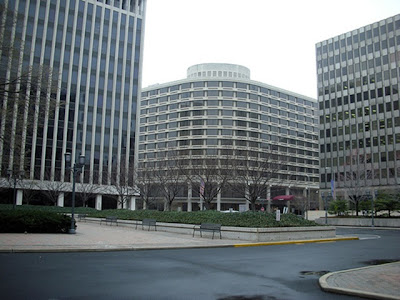 As for Crystal City in Arlington -- pictured above in an image I got from the DC Traveler site -- while it is similar in concept and I wouldn't live there, it seems to work a little better in terms of having an actual "community" with lots of people living, working, shopping, recreating (if not procreating), etc. there.
And to hell with Frank Lloyd Wright, too. Ever been in Falling Water? What the hell is that about?
Wait, I got off topic. Sorry. Yes, the interview went very well and I'm happy about that. 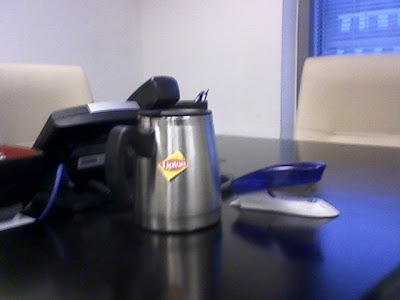 I need to get ready as I'm going over Chris T's place tonight with Gary and then I'll go to Cobalt and/or Windows tonight.
--Regulus
Posted by Regulus at 5:47 PM

you did well.
I suggest you treat yourself to a nice order of fish and chips with a glass of ale and for supper maybe steak and kidney pie or Yorkshire pudding with a cup of Earl Grey

"brutalist" architecture. YIKES!
The local Junior High was built with out windows, so the kids wouldn't be distracted by whatever was outside (Sunshine maybe?).
It's like a freak'n prison in there!

Thank you, Kristof, but it is all a matter of waiting now.

If things don't work out here, I may actually come visit you for a week or so before heading to Florida.

Rita -- Yes, it is known as "brutalist" architecture. That's its name. I didn't come up with that.

Do you need anyone to review that book you mentioned?

good luck to you on the follow up stuff!