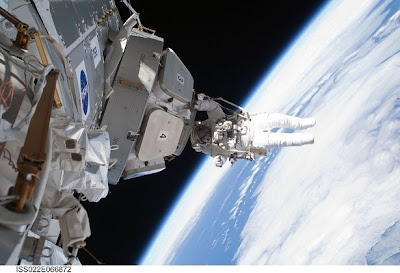 Here U.S. astronaut Nicholas Patrick installs cupola windows on the International Space Station as part of the 130th Space Shuttle mission earlier this month (Feb. 2010).
Patrick, the ISS, and the Space Shuttle Endeavor were hurtling around the Earth every 90 minutes in a constant state of "free fall" (hence the perceived "weightlessness" about 210 miles up), but never quite falling out of orbit!
Source: Feb. 24, 2010 APOD

This will be a relatively brief entry (although I know I always say that and end up with long entries anyway) as I need to finish part of my climate change news compendium by tomorrow morning -- I'll be up until at least 4AM. Additionally, I have a VERY important job interview late Friday afternoon that is at once my potentially last but also very best hope.
If it doesn't work out, I don't see how I can remain in D.C. beyond early to middle April. 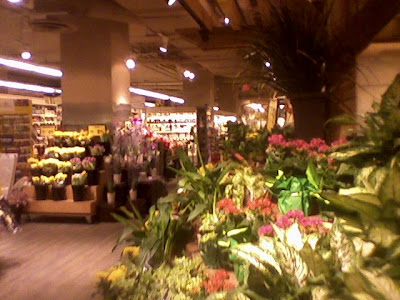 This week so far has been going well: I got paid promptly by the consulting company for which I do contracting work and I have the aforementioned job interview. I also had a very nice dinner tonight with LP and my friend S., who is the office administrator at said consulting company. We went to Bangkok Garden in Bethesda.
Oh, yes, the career networking night for the Univ. of Maryland School of Public Policy on Tuesday went well in that I had a few good conversations, including one that clarified how that unnamed company I mentioned in my last entry deals with applications. 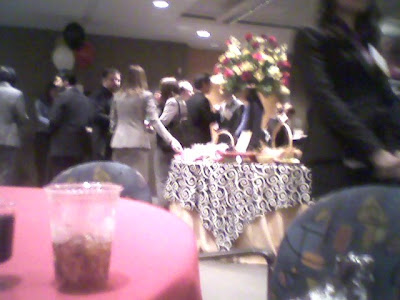 Here is a blurry cellphone picture of the event. It was held, as always, in a conference room of the Carnegie Endowment for International Peace near Dupont Circle.
#######

Without going into a lot of detail, I don't think we're going to get a lot of snow tomorrow (Thursday). That's fine with me, if only I don't want this job interview schedule screwed up by another blizzard. The low itself, though, is forecasted to stall along the Jersey shore and basically spin itself out (fill).
We remain in a warm phase ENSO and there remains a big high pressure block over Greenland with a displaced polar vortex. 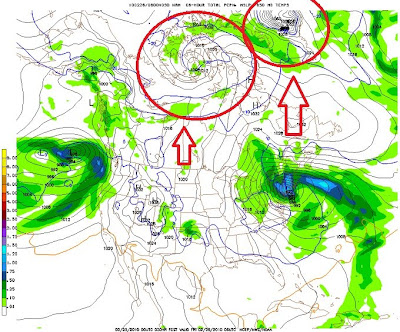 The 0Z Feb. 25, 2010 NAM (North America Model) run valid at hour 30 06UTC Feb. 26, 2010 showing mean sea level pressure (MSLP), 850mb temperature, and 6-hour precipitation showing the low at its most intense located right over Long Island -- with a near blizzard in New York City.
The red circle I drew in over northern Canada shows the polar vortex (or at least a portion of it) as bounded by the -30C isotherm over Somerset Island and western Baffin Island -- displaced from the North Pole itself -- and the smaller red circle over Greenland shows the huge high pressure block there that is interrupting the normal flow.
#######

This 5 minute clip of Rep. Anthony Weiner on the House floor blasting the Republicans over efforts to pass health care reform is worth watching in its entirety.

Naturally, Pres. Obama did not invite Weiner to his silly "health care summit" later today at the White House. Instead, he wants the GOP crazies and key members of the health insurance cartel, and wussy Senate Dems there.
Sigh. What a disappointment he turned out to be.

God's trying to take him but he won't f-ing go

That's all for now. My next planned update won't be until Saturday. I have to finish my biweekly climate change news compendium and write a short piece on geothermal energy issues as part of my job application.
I actually don't feel very well tonight: I feel fatigued and extremely worn out.
--Regulus
Posted by Regulus at 12:12 AM

I have one advice for you: don't be afraid to show a little leg at that interview. A little leg goes a long way.

I was going to say something about a third leg, but, sweetie, I decided to not even go there. This is a family blog. Well, sort of. On second thought, no, not really.