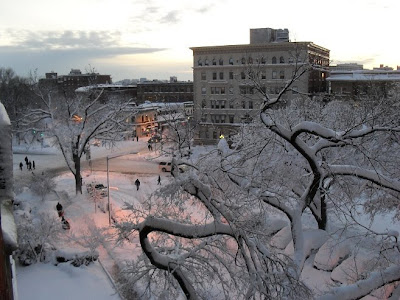 So the snowstorm is ended and it was a whopper -- easily ranking in my personal experience with the biggies, Jan. '96, Feb. '83, and (back in my New Jersey childhood), Feb. '78. It felt like a blizzard -- unlike the big Dec. 19, 2009 snowstorm that felt like a big heavy snowfall.
I have been trying to get storm totals but I don't have any final numbers yet. The storm total reports from LWX and the preliminary climate data for the three regional airports are included below.
Oh, yes, the pictures in this entry are mostly from my poor cellphone camera. 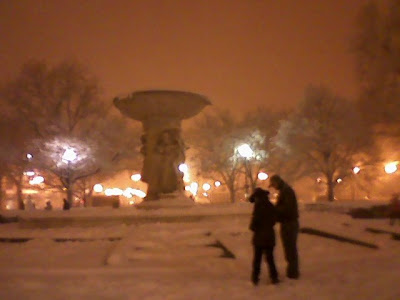 17.8" fell at Reagan Washington National Airport (DCA), ranking it 4th among Washington, D.C., snowstorms and second since the records have been kept at National Airport (starting in 1941), behind the President's Day storm of Feb. 1979 when 18.7" fell.
The man who has overseen the NWS observations at National Airport since the late '70s has made it his personal mission to ensure the sacredness of that record and that it NEVER be broken. He has bragged about that in media interviews.
The top two pre-DCA records, #1 at 28.0" in the Jan. 1922 "Knickerbocker Storm" and #2 at 20.0" in 1899, remain intact, as they will in all likelihood until the end of time. Snowfall records stretch back to 1888 for Washington, D.C. 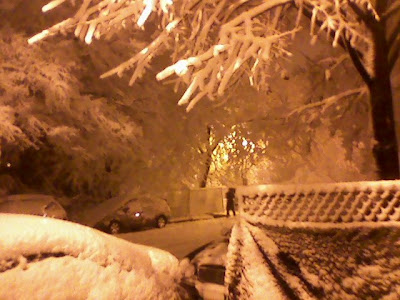 I can't get a definitive BWI number either. Earlier, I read that 26.5" fell at BWI Airport, which would TIE for 3rd among Baltimore, Md., snowstorms with the 26.5" that fell in the same Jan. 1922 Knickerbocker Storm. I believe at least 26" fell, which would rank it 4th among Baltimore snowstorms. Records have been kept at BWI since about 1950 and prior to that (I believe) at the old Custom House. Snowfall records date back to 1883 for Baltimore.
The Jan. 1996 storm had slightly more at 26.6" and the Feb. 2003 storm had 26.8". Thus, the top four snowstorm totals for Baltimore are clustered within 0.3" of each other.
**Updated: Apparently there was some error in the BWI snowfall measurement, so 24.8" is the current official storm total.** 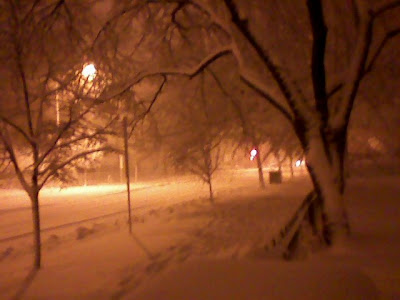 I can't get a definitive number for Dulles International Airport (IAD). The climate report says 32.4" but that can't be right. An earlier number I saw was 18.9". If it is the latter, that would rank it fifth. If it is anywhere close to the former, it would blow away the existing #1 snowstorm total of 24.6" in Jan. 1996. Dulles snowfall records stretch back to Jan. 1963 shortly after the airport opened.
Here is the LWX page of big area snowstorms. The average annual figures for the 1971-2000 have been corrected on this page. They will be updated to 1981 - 2010 next year. Even with this year factored in, I think the 30-year averages of 15.2" at DCA, 18.2" at BWI, and 21.2" at IAD will drop again.
**Updated: The LWX public information statement put out tonight makes no sense compared to its own big snowfall page (linked in above paragraph). There is a two-day versus three-day issue but I am not sure why it isn't just a "storm total," however many days.** 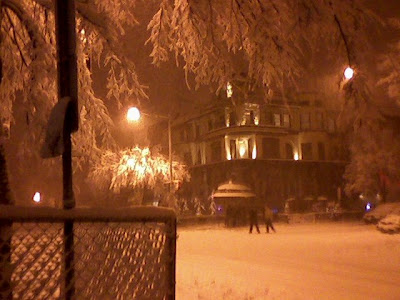 Other unofficial totals are in the 20 to 30 inch range across the region from the Virginia Shenandoah to suburban Maryland. 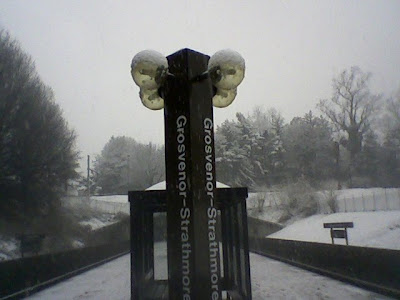 I'm actually all alone this weekend although I saw Joe and Ana last night at the Black Rooster pub and had a nice time. Gary is in Boston this weekend -- he picked quite a weekend to go there; LP, Gerry, and Amie are in their suburban homes and not able to get into the city as the roads are impassable and the above ground Metro stations are closed. Kristof is not around, of course.
Sigh. 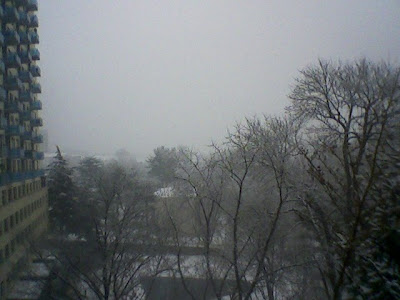 I may more pictures posted in a day or two.

There is an I Love Lucy marathon on Hallmark this weekend. Exactly how long were the Ricardos and Mertzes supposed to be in Hollywood?? That whole thread seemed to go on for an entire season. What about her baby, Little Ricky, back in New York?
--Regulus
Posted by Regulus at 5:49 PM

Wow, awesome pictures Richard! I especially like the one of Cobalt - I wouldn't recognize it unless you had identified the building. Looks like Metro and Amtrak will be digging out for the next 24-48 hours. Maybe on Monday things will start to return to normal? Wish I had been there to witness all the excitement.

From your text message I inferred that you're not enjoying the snow. Knowing you quite well I find that surprising. Is it perhaps because no one's around? If so then well, welcome to my world. I remember the snow of 2003 as something rather fun. I was trying to get back to DC from NYC blissfuly unaware of the gravity of the situation. Yes, Stan knew about the snow from his parents and told me to stay with him in New York because "dude, you won't get home, you don't realize how bad it is" but I dismissed his concerns as "panicking". Little did I know... I managed to catch the last southbound train and got home somehow. I stopped by snowbound Marx Cafe when I found a handful of patrons and, inevitably, Eric by the bar counter talking to Mark, the owner. I was proudly wearing my huge "no blood for oil" button (I was in NYC for an anti war demonstration). Good times. And then NASA was closed for three glorious days and you brought a date to your place and Gary had to wait outside for half an hour in subzero temps:-). Oh good good times. I almost wish I were there right now although I don't care for snow that much.

I'm a little drunk. Met an Irish gentelman at Barcode in Soho. You know how it is: an Irish guy, a Polish guy and the Pope walk into a bar in London....:-)

Yes, those are pics of D.C. in the blizzard, including Cobalt. Of course, I don't have a very good cellphone camera so you might not have recognized that it was Cobalt even without the snow. Gary went to Boston, where he may be stranded beyond his planned Tuesday return if the next storm pans out. I will post a little more on the seasonal amounts and stuff in my next entry.

Thank you for the comment and text message. I recall that 2003 incident. But for the last time, Gary went outside to dig out his car and was back inside in 20 minutes. And it was not subzero Fahrenheit, more like 24F, and he was bundled up. Nor did I ask him to leave the room.

I will admit that I am a little overwhelmed and tired of the snow. And I know you were never a big fan of winter weather.

Kristof, I did a dumb thing ... I emailed (drunk) the UMCP top lawyer saying I would sue the school for consumer fraud for the fact I have 3 masters degrees and an undergrad and $206,000 in student loan debt -- and no job with no prospects, and I railed about the way I got treated in the journalism program. Anyway, I sent a follow-up apology email. Not sure why I did that but I was very upset.

Maybe you would win such a lawsuit. More likely you would spend another 200,000 on lawyers though. I wonder if they reply

I'd prefer that they didn't.

Read this article by Paul Krugman. He compares the broken U.S. Senate to the Polish Sejm of the 18th Century and how the latter's rules helped with the dissolution of the country. I like the idea of how the GOP has descended into "nihilism."

Another astute observation made by Krugman. This is interesting. My understanding has always been that the infamous Polish "liberum veto" (d)evolved from a principle of consensus that seems good in theory (cf Homer Simpson: "In theory, Marge, in theory communism was a good idea". Or Joey from "Friends": "A lot of theories don't work. Like communism, or geometry"). So the idea is that when, say, a group of friends go out to dinner they will discuss what restaurant to choose until everyone is happy. That makes sense. The problem is that politics are done by groups of interest which may just not want to reach any consensus. That lead to a disaster in Poland. All it took was for the Russian empire or Prussia to corrupt a single member of the Sejm and he'd block any legislation. That was exactly what happened until 1791 when the first Constitution was proclaimed which nixed liberum veto and gave rights to townspeople as opposed to just the nobility. It was very progressive but at that point it was too late.

As for the USA it is being hijacked by big business with the full approval of a large segment of the population who thinks it's about "family values", "defending our freedom" and that second coming of Jesus crap. Pretty damn stupid if you ask me.

Interesting about Poland's history. As you know, I always assumed my Polish relatives (on my mom's side) were just dirt farmers back into time immemorial and had no concept of a Polish legislature, or really anything!

And you're quite right, Kristof, about the U.S.