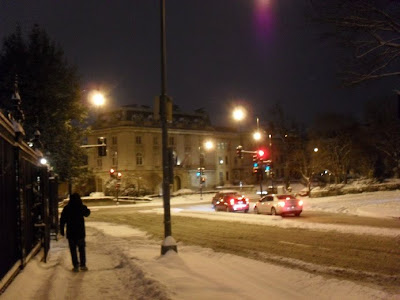 OK, this will be a weird and disjointed entry that features a lot of pictures (not in chronological order) of the moderate snowfall we had over the weekend. Some where taken with my digital camera and some with my cellphone. Joe S. took a few pictures around his Tenleytown / North Cleveland Park D.C. 'hood and sent them to me. He missed the Dec. 19th big snowstorm as he was in San Francisco for a conference and couldn't get back for almost two days (LP couldn't get back for nearly 4 days). Thus, this was Joe's first significant D.C. snow event. 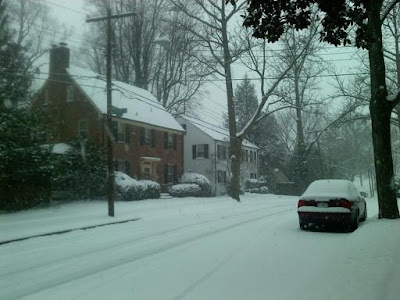 As a climatological detour on this year's snowfall ...
DCA ended up with 6.4" ... BWI 5.5" ... and IAD 4.5"
South of here, there was some near-historic snow totals including 12+ inches around the Richmond area (I think Richmond airport officially had about 9"), and even 6+ inches in the Norfolk area and a few inches on parts of the North Carolina OBX. 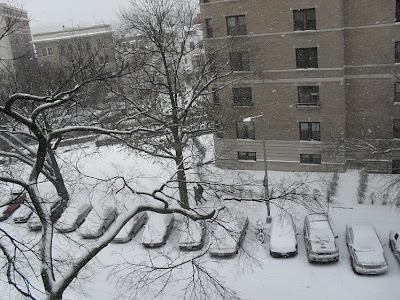 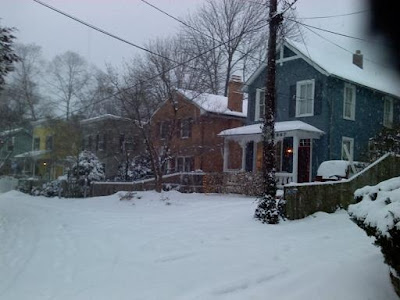 Another D.C. Tenleytown area picture in the snow from Saturday.
#######

Of note, the 6.4" at DCA was allegedly on just 0.13" of liquid equivalent, making for a nearly 50 to 1 ratio of snow to liquid. Even at 18F, that seems suspiciously high. As it is, there is no standard way of melting down snow to determine how much liquid it really was. Different recording stations do it differently.
BWI's 5.5" was on 0.24" liquid equivalent or a ratio of 23 to 1. Naturally, the ratio was not actually that different between the two nearby airports. Rather, it is an artifact of the method by which they are calculated. 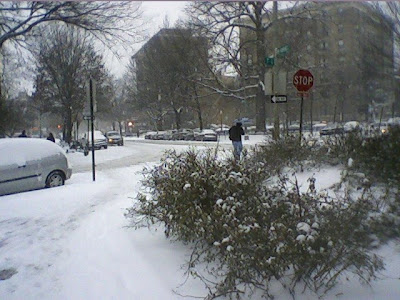 Below is another picture on a back alley in Joe's neighborhood. 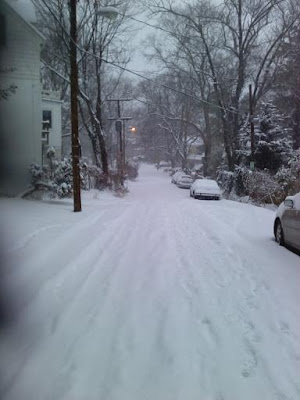 The new 30-year averages come out after 2010 (for 1981-2010) and all three airports will see another drop even if this winter is very snowy.
Of note, there is another weather system that may at least a few inches of snow to the D.C. area tomorrow night into Wednesday and then there is a potentially big storm on Friday - Saturday.
####### 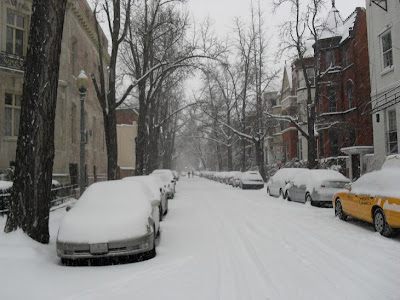 Given my weird life, though, and completely dysfunctional and broken "career", too much snow could interrupt my getting paid late next week because it could interrupt the whole administrative process at the dreadful consulting company for which I work. The result would be my February rent being not paid Feb. 12th but closer to the end of the month. I'm due $540 by the end of next week. I can't pay my rent in full until I receive that. 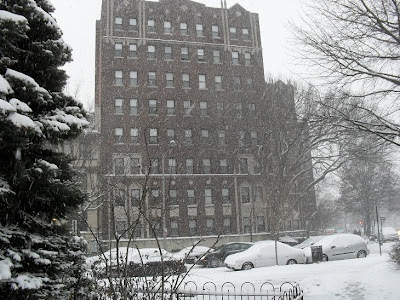 Then comes March ... and if things don't change, by which I mean getting another job, I will have finally reached end-game and at the very least I will have to give up this apartment.
This will please some enormously because it will prove some ghastly and empty philosophy about the Universe.
Sigh. 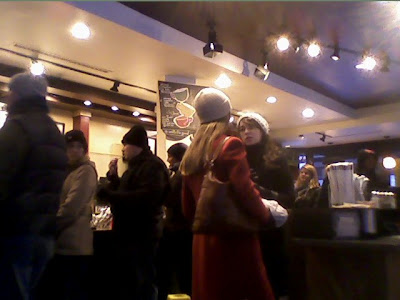 The Starbucks at R St. and Connecticut Avenue, NW, Washington, D.C., 5:13PM, Jan. 30, 2010. It was a snowy late afternoon. This crowd in Starbucks was vintage D.C. yuppie: young, professional, upscale, instant access to great employment opportunities, ultimately completely uncaring, and endlessly annoying -- unless, as LP said, I am projecting a bunch of things.
#######

I'm not going to go down to frickin' Florida to live with my dad in his awful Flagler Beach setting ... every frickin' day would be a nightmare. How many times could I walk, depressed, on the beach and pondering my completely failed life? I can spend hours in his stupid "Florida Room" in agony. It's not even like it's South Florida. 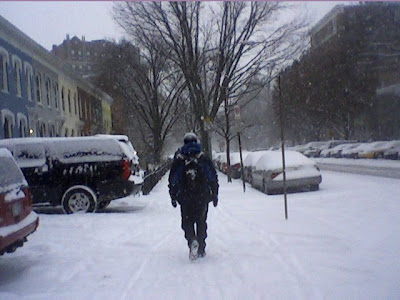 Yes, I'll try to find a cheap room in College Park or somewhere in suburban Maryland or a non-shitty part of D.C. in which to live. 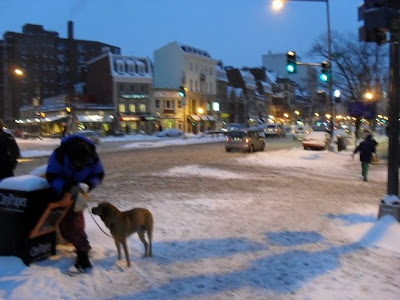 This is the intersection of Connecticut Ave. and R Street, NW, Washington, D.C. (outside the Starbucks), as sublime snowy blue-gray dusk fell over the city. Unfortunately, this digital camera pic came out a bit blurry.
#######

Of note, in the past month there has been a cartoonish level of failure in job applications -- is it me or does our American society simply not work anymore, although I think I'm also under some sort of curse that isn't going to end until I'm dead ... 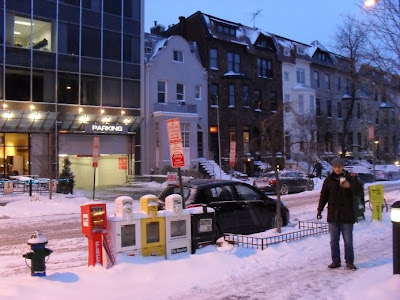 The little place was closing just as we got there. However, the director (Adah Rose Bitterbaum) was a very nice lady and she told me a little bit about this local artist Brian Williams (no, not the NBC News guy) whose pictures have been featured there.
Ms. Bitterbaum was actually nice -- unlike the "drink and draw" I attended at the Neptune Gallery in Bethesda in December where the lady (Elyse) running the program basically told me my picture (or at least the head part that I drew) sucked when I showed her at the end.
#######

Anyway, the job-seeking low lights of the past few months include:
* Some b.s. with a non-profit that a kind and dear friend tried to facilitate but that did not work (zero follow through after the initial, "yeah, send your damn resume..."). 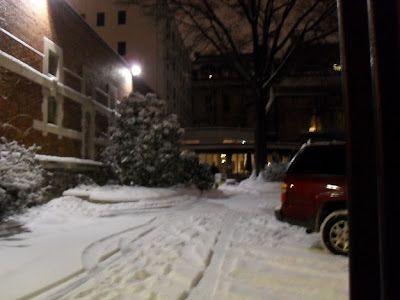 * For Census 2010 employment, apparently, the Census Bureau in D.C. is ONLY hiring convicted criminals. As the article implicitly states, Census officials are mostly worried about what CATEGORY of crime was committed. The unspoken aim is to increase inner city response rates (by hiring such folks as door-to-door enumerators). Fluent Spanish speakers are also given priority even if they speak no English.
* More usual Federal job application nonsense, including another one with EPA in which my chances are MATHEMATICALLY ZERO ... How different would my D.C. life have been if I lived here in the 1940s and 1950s. 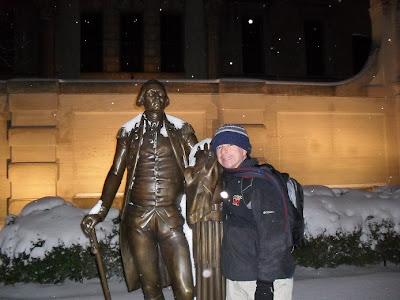 * Some deep bullshit with this guy who worked at an environmental consulting firm (the one at which I applied and was treated like shit and complained thereafter once I had been summarily rejected without even being told) who has been in contact with me (because he felt badly how I was treated, but even more so because he quit and had his own issues).
This guy put me in touch with some other guy (a former colleague of his) who works at a renewable energy technology firm and I went to that company's Web site and saw a job advertised that I would fit so well but I got no reply either from him or the company if the position was still open. What is confusing is that the job lists a "projected start date" early last month but a "closing date" of the end of this month. I even called up a number and the same unhelpful woman answered the phone at the suburban Maryland AND the Colorado number. Typical.
* A SANDWICH shop on Connecticut Avenue near Dupont Circle where I applied last week. I thought I had made a connection with the manager. 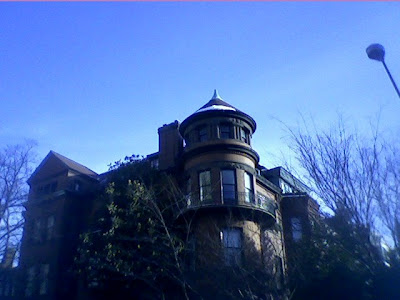 Life is a big pile of crap, metaphorically speaking, if not literally, at least in America, 2010. Bush might as well still be president.
My apologies for being so miserable (what's new?). But at least I'll have the Florida Room in a Flagler Beach tract house. 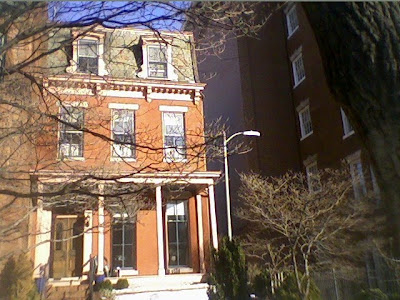 I did manage to get another $300 worth of work this week from that consulting company -- more DOE nuclear budget related stuff, as well as something about a new blue ribbon commission on blah blah blah whose members include blah blah blah to analyze the nuclear waste storage issue since the Yucca Mountain geological repository is not going to happen. 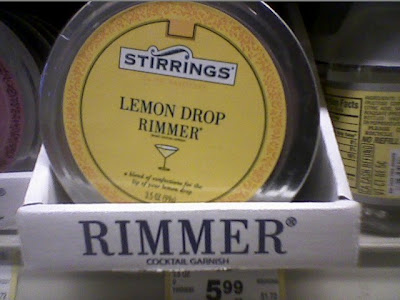 It is Monday night -- well, now it's Tuesday morning -- and I just finished watching hours of reruns of The Golden Girls on WeTV and Hallmark Channel. WeTV has a GG marathon on Monday nights with one always emotional episode of Ghost Whisperer. Now the "comforting" TV continues with Cheers reruns ...
OK, since I included so many snow pictures, let me end with the contra-positive of that ... 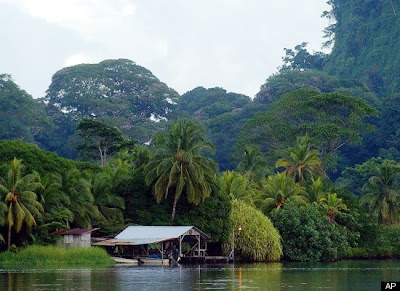 A secluded tropical setting somewhere in Costa Rica. I was actually in Costa Rica in 1997 with my dad but it was mostly a very bad vacation.
#######

It's 3:30AM and we just went under a winter weather advisory. Anyway, that's all for now. My next update planned actually won't be until later in the week, possibly even Friday or Saturday.
--Regulus
Posted by Regulus at 12:16 AM