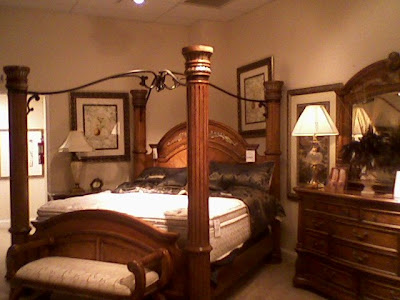 No, this is not my bed. It's a king-sized bed with all the kingly accoutrements at the Value City in Falls Church, Va., 5:39PM, Feb. 15, 2010.
The pictures in this entry were taken with my poor resolution quality cell phone camera on Monday, Feb. 15, 2010, in particular on an unexpected Northern Virginia jaunt with Gerry to two furniture stores. Once in a rare while I get a non-blurry picture (such as the one above).
#######

I still have a lot of blizzard-related pictures I could post, esp. of ones my mom sent me, but I think everyone is snowed out. 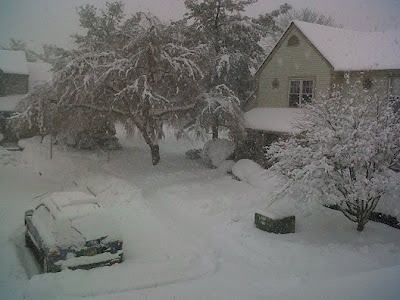 This picture was actually taken in central New Jersey during the blizzard on Feb. 10th. My friend Joe sent it. He got it from his friend Kevin. This is Kevin's house though I'm not sure where he lives. It's either in Mercer or Middlesex County.
#######

This now-concluded Monday actually turned out to be a good day, although I seem to be losing one friend in particular. No, I'm talking about the other situation with P. The difficulties I am having in my life that have only exacerbated a range of emotional instabilities for me have created a situation where I simply cannot hold onto certain friendships. 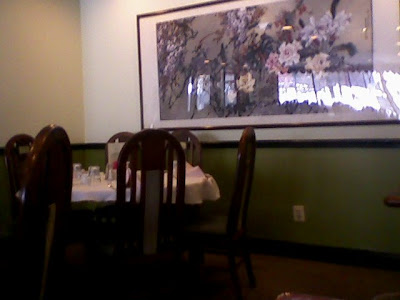 Anyway, I went to Bethesda to have lunch at Moon Gate restaurant with the office manager of the consulting company for which I work as an underpaid contractor. She delivered a check to me and we had lunch. I took her to lunch since she has helped me so enormously in expediting pay checks to me.
It began snowing while at lunch and by the time I got back into D.C., a wet snow was falling, thickly, though it soon ended with only 0.1" accumulation officially at DCA and BWI and 0.4" at IAD. 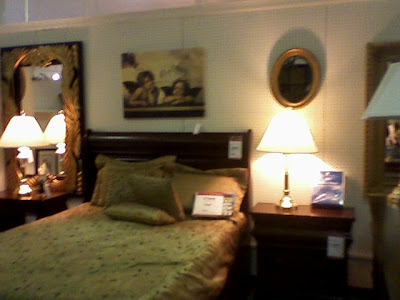 However, that 0.1" was just enough to push the BWI total to 80.0" exactly and the DCA total to 56.0" exactly -- that's nearing a staggering 7 feet at BWI. IAD is now at 73.2", or just over 6 feet. All three added to their seasonal records.
Of note, the Federal Government and most businesses were closed this Monday for the President's Day holiday. The Federal Government has been closed 5 of the past 6 week days -- last week as a result of the blizzards. It was only( partially) open on Friday.
Anyway, I headed home and Gerry quickly arrived and helped me set up the Avast anti-virus software. He even paid for it, which is incredibly nice of him. Thereafter, he and I took one of those Northern Virginia weekend drives that we used to take so often but have not in a long time. 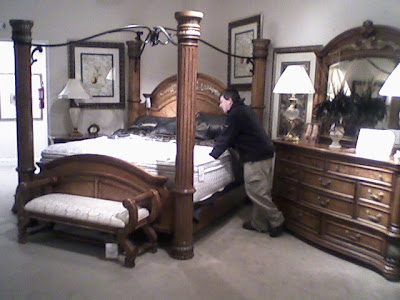 Here I am next to the same bed shown in the top image to this entry. Maybe it's because I sleep on a mattress on the floor that's under a pile of quilts and pillows -- with my stuffed animals -- in this dust-ball apartment that I am so intrigued by sleeping in such stately opulence, real or mass produced imagined.
#######

Gerry and I drove first to Value City in Falls Church and then to the Room Store (not the storeroom -- ha ha) in Fairfax. He is looking for new bedroom furniture. We then went to Metro 29 Diner along Lee Highway in Arlington and had a nice dinner -- which Gerry bought. I owe him so much. 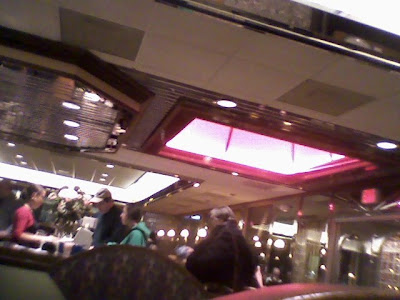 The weather was drizzly - sleety and foggy and raw but temps were still above freezing. There is so much snow and glaciated-like ice along the roads that the area still looks odd. It also makes driving -- to say nothing of walking -- dangerous.
This was my first time in a car in about two weeks. I had not been out of the District of Columbia for seven days until Sunday when I went to Maryland. I hadn't been to Northern Virginia in at least a few months. It is amazing how hunkered down I am in this weird gay ghetto. As for the effects of the blizzards here in my little part of D.C., the Safeway on 17th Street is still half empty; the bars are running out of liquor; and I haven't had ANY mail in 8 days. I think the mailman actually arrived one day last week. 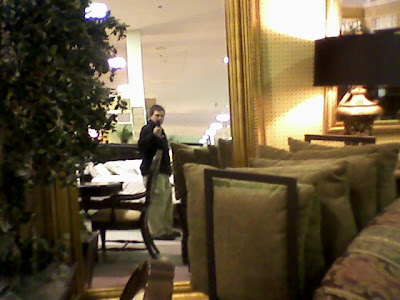 Tomorrow -- or rather, later today (Tuesday) -- I am going to submit a resume and cover letter for what I consider to be my last, best hope for a job in the near to medium term. I opened my mouth and told a bunch of people I know about this possibility -- and therefore I OF COURSE totally jinxed it. 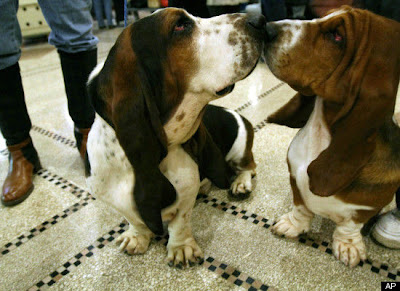 If I can finish two assignments this week, I will be able to earn as much as $890, although right now it is $540. I wish I could know how long I need to hang on here before I actually get a real job. I may never actually get a job as the Empire declines.
By the way, here is an interesting article about a family that was paid to move Hazelton, North Dakota here.

I guess that's all for now. Hallmark Channel is showing an I Love Lucy marathon tonight. I have a feeling that the (very) late William Frawley -- who played Fred Mertz -- was actually gay. His bitchiness was just too perfect.
Speaking of I Love Lucy ... 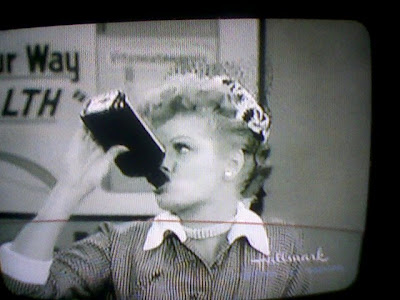 Here is a screen shot of the I Love Lucy episode on from 230AM - 3AM on Hallmark Channel.
It's from the great "Vitameatavegamin" episode "Lucy Does a TV Commercial" where Lucy gets wasted on a tongue-twisting named health tonic that has a high alcohol content. This same concept of a health tonic that is basically booze was redone 20 years later in a much less innocent and far more troubled time in an episode of Good Times.
--Regulus
Posted by Regulus at 1:34 AM

What an impressive bed!Big enough for six people. Is that what Gerry is buing for his bedroom?

I think he is getting a slightly smaller bed, just big enough for him and two mid-Atlantic bear contest winners ...

Thank you for clarifying this. NOW I get it:-)

Oh, please...that puny bed would not accommodate my 3 big burly leather men, and the thing above it is way to flimsy to hold a sling. Why do you think I passed it up?

Only because they're relevant ...

Blanche: First Rebecca gets pregnant in a doctor's office and now she wants to give birth in a bedroom. She's got the whole thing backwards!

Sophia: She should have the baby in your bedroom. At least you've got stirrups.

Dorothy: And there's a better chance of finding a doctor.

Sophia: You should have Clayton and Doug stay in Blanche's room. We know her bed can hold the weight of an average female and two Venezuelan soccer players.

Blanche: What'll the neighbors think if they see two strange men in my bed??

Sophia: [All together]: THEY'LL THINK IT'S TUESDAY!

Ha ha ha ha ha.
For some reason all I can think of right now is two Venezuelan soccer players. Quit putting those images in my mind