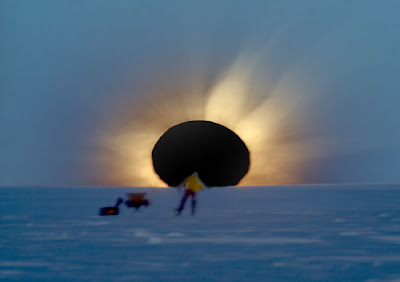 This is a total solar eclipse in Antarctica on Nov. 23, 2003. This has to be one of the most surreal images I've ever seen. It was featured in an Astronomy Picture of the Day some years ago.


I've been trying find the answer to the question of when was the PREVIOUS total solar eclipse actually here in Washington, D.C., i.e. where totality crosses at least some part of the District of Columbia, and it turns out it was on June 28, 1451 -- i.e. in the pre-Columbian era and centuries before the city existed. Only some native American settlements and whatnot where here.

This date is a Julian calendar one -- i.e. before our Gregorian calendar was first developed in 1581 (it was adopted in France in 1582 but not in Great Britain and its colonies until 1752), so saying "June 28th, 1451" is a little tricky since that wouldn't exactly be the date (off by 7 to 8 days or so) from the date we would use today. 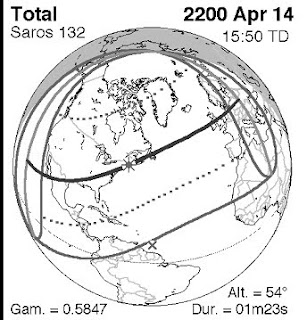 The NEXT one is listed as April 14, 2200, or nearly 749 years later, except the line of totality JUST MISSES the geographic region of D.C. (to the northwest) by about 5 miles.


Here is a 2005 article on Space.com listing the duration between eclipses for 25 world cities.
I don't believe these maps take into account continental drift, and 450 years ago the line would have to be shifted to the west by roughly 40 feet and 200 years hence would have to be shifted to the southeast by about 20 feet -- since North America is moving to the WNW by about an inch or so a year.


OK, so it's not that much but if you were right on the line of totality, it would be important. 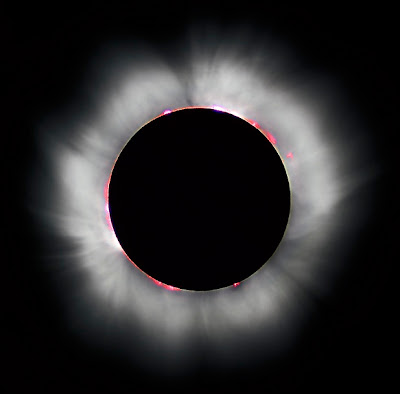 
In the far future -- hundreds of millions of years hence, long after human civilization is gone -- the Moon will have receded far enough from Earth (due to angular momentum exchange that also causes a tidal drag that gradually slows the planet's rotation on its axis) that there will only be annular (no more total) solar eclipses.


Speaking of the Julian - Gregorian calendar, Wikipedia has a good article about it here. It also lists (just above) when different countries adopted it.
To me the oddest fact of all is that because Russia did not adopt it until the Soviet era, actually in 1918 when Jan. 31, 1918 was followed by Feb. 14, 1918, while parts of Poland had adopted the new calendar almost immediately in 1582, this means that for 336 years, if anyone had crossed the border, they were crossing backward or forward anywhere from 10 to eventually 13 days in time. Confusing.


Continuing with the sublime astronomy theme of this entry ...

This is a 6 minute YouTube clip "The Known Universe" of an animated movie produced by the American Museum of Natural History (AMNH) showing a trip from the Himalayas to the edge of the Observable Universe and back again, set to haunting music. It was featured in the Jan. 20, 2010 Astronomy Picture of the Day link here.
As a minor but important point, the 13.7 billion light years representing the age of the Universe is not the same as the distance to the edge of our "Hubble Volume" because of cosmic inflation.


The GFS model's recent runs have been suggesting a snow event for our region including D.C. proper for Friday. 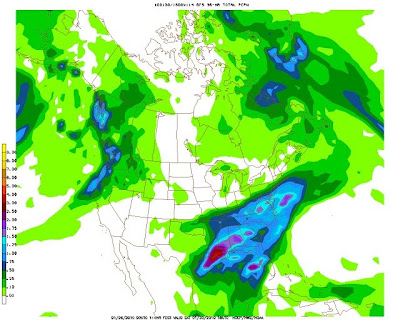 
OK, that's all for now, except I want to say that I found out that the awful woman for whom I have been doing so much contracting work in such a diligent manner has not been approving my invoices in anything near a timely manner, and it is only because the wonderful office manager has been taking the initiative to process them. This is no way to live. If that continues, I am going to let the head of the company know about this. 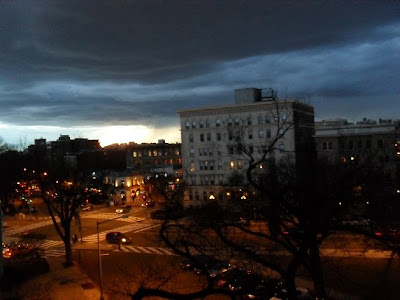 
As it is, I really want this contracting job to end in the next few months. It is a lousy way to live. And always being so broke. It grinds the spirit down to deadness. Of course, I need actual employment, unless I just throw in the D.C. towel and head down to Florida to live in 40-year old failure loser-dom.

That's all for now. My next update won't be until Thursday or so.

Yep, the Great October Revolution was actually in November. As for Poland, it did what it always does i.e. did what the pope told it to do.

That video you've embedded can't be right. It almost looks like the Earth is orbiting the Sun not the other way around.

(sorry, I've been reading too much climate chenge denialist blogs and it's starting to rub off on me:-))

I always new Poland was a very progressive country, indeed.

Yes, the Sun revolves around the Earth. The Texas Board of Education told me that the Bible said so.

I'm always happy to contribute a retarded comment or two. Anyway, so someone moved into one of the two other flats I share the loo with. (The guy on the left moved out, thank God Ash the Sexy still lives next door). I haven't seen the new person yet but as of an hour ago I know what his/her shit looks like. THIS TOILET NEEDS AT LEAST TWO FLUSHES. It's English, sometimes it takes four for everything to go down. I can tell you one thing: Whoever installed that thing was NOT a Polish plumber. How did they find a plumber who's not Polish in London is beyond me.

If you or any or your readers is grossed out by this comment just think how I felt!

it is a well known fact that russia did not adopt the g-calendar for as long as it did for the sole purpose of being difficult...

re the unfortunate uninvolvement:) of polish plumbers in the installation of your toilet, krzysztof, i feel your pain - here is an advice: when you flush hold the pedal for as long as there is water in the tank. i think these things set to discharge only a third of their capacity...

if you want to increase the comment section of your blog - this is a kind of useful information you should put into it!

if this is not an example of transcontinental cooperation our mother earth needs - i don't know what is!

Well, Kristof, I know that has to be the highlight of your time in England: looking at someone's unflushed poop.

But how do you know it was NOT a Polish plumber? I thought you were starting with a joke but there was no follow-up or punch line!

Are you saying I should write about plumbing issues in Europe to increase my share of comments?

By the way -- to both of you -- did you watch that YouTube clip the link to which I sent you? I thought it was pretty funny, albeit seriously warped. I did not want to embed it in this entry, though. God only knows what kind of attention that would attract.

Oh but there's no pedal. It's the upper tank kind of thing which you flush by pulling a chain. We had something like that in Gdansk when I was a little boy before it was replaced with a proper toilet. I don't want to pull that chain too hard because I'm afraid the heavy Victorian looking tank will fall on my head. I need the new neighbor to flush his/her thing. I think that person never looks down there and doesn't realize their stool is still afloat when they leave the facility.

The toilet contraption sounds complicated. I'm not even sure I've seen one like that before. Then add in that sandpaper toilet paper and you have a real Eastern European 5-star hotel ... ha ha.

I shall slap your wrist if you don't stop that:-)

OK, I have seen it before, though not sure where.

If only other parts of the world could get their plumbing issues together with a standard, decent, all-inclusive bathroom, I'd be far more amenable to saying, "Buy, buy, U.S.!" and living abroad. I mean, if my dumpy little apartment can have that, surely a nice walk-up flat in Kensington ... can have that. Never mind about the French ... they're hopeless when it comes to decent all-inclusive bathrooms.

No contribution to the toilet discussion but I really liked the universe video.

"No contribution to the toilet discussion..." -- Boo.

Oh, yes, I was hoping you noticed my previous entry and Oregon reference.