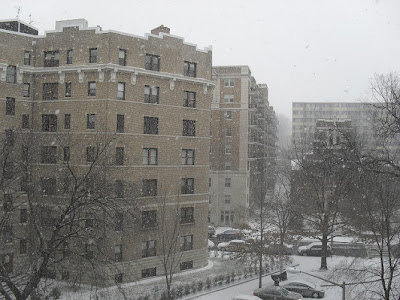 I took this picture and two more (see below) from my apartment kitchen window at 10AM this morning as the accumulating snow was just starting. This is looking toward the northwest up toward Meridian Hill Park. The land rises quite steeply -- that's (all together now): THE EAST COAST FALL LINE AS IT PASSES THROUGH D.C.!
#######

So we are getting a decent snowfall across the region today ... that would be the "Washington - Baltimore - Northern Virginia Combined Statistical Area" ... with very cold temps., only around 18F, so it is a fluffy, powdery snow. Up to 7 inches is forecasted for D.C. proper. We have had about 4 inches so far.
Sterling (LWX) -- that would be the Baltimore / Washington National Weather Service Forecast Office -- finally upgraded D.C. to a winter storm warning from a winter weather advisory around 10AM although that should have been obvious by 7AM even before the snow started.

I would put the image of the LWX CFA (county warning area) map with the warnings and advisories but I cannot figure how to do screen captures on this computer and dump them into JPEG images. Everything else with this computer is much better to my old one except for that feature. I used to get a lot of images that way. 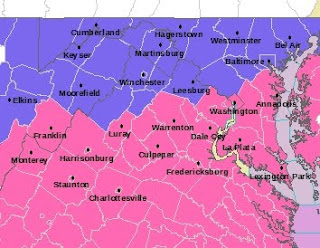 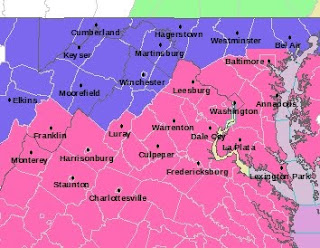 ... in the time I was writing and posting this, Sterling just moved the warnings farther north to include Bal'mer, Merlin, hon. That's Baltimore, Maryland to those who don't know the Maryland accent.

Here is a bit of Marylandese... I did NOT come up with this but I am mixing two different sentences.
"She raid her boskle in da snao wif her ayes glazed in Ann Runnel Kenny, hon."
Translation:

"She rode her bicycle in the snow with her eyes closed in Anne Arundel County, hon(ey)." 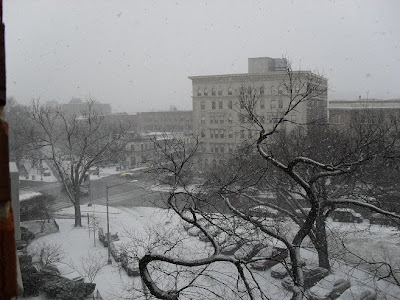 Anyway, this storm has been forecasted for days and throughout there had been an extremely tight north-south precip. gradient as the storm moved out of the lower / mid Mississippi and Tennessee River valleys into the southern and central Appalachians and toward the Southeast coast with no real northward component up the coast owing to an Arctic high to the north of the system and lack of a large East Coast trough pattern.
At one point yesterday ALL of Tennessee and nearly all of Virginia and a large swath of North Carolina were in winter storm warnings (the criteria amounts are lower farther south).
The GFS and NAM forecasted lots of snow here for today 4 days ago ... then 3 days ago there they forecasted nothing ... then 2 days ago it was just a little bit ... and then yesterday they crept the totals back up to 0.3 to 0.5 inches liquid equivalent but with a sharp gradient. At 15 to 1 ratio of snow to liquid at these temps and thicknesses that is up to 7.5 inches of snow. 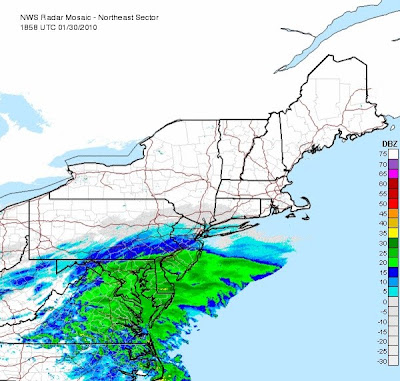 Here is the northeastern U.S. quadrant radar mosaic of a series of individual radar images (composite mode), 1858UTC (1:58PM EST), 30 Jan. 2010.
The storm moved a farther north than anticipated so all of Maryland is getting snow today and southern New Jersey. The Maryland suburbs are still in an advisory and we are in a warning from D.C. southward.
#######

Naturally, I haven't gotten out of this is 5th floor apartment cave in which I live. I got up at 9AM and fell back asleep until nearly 1PM. Again. 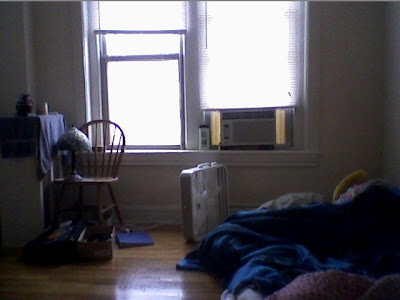 Here is a picture of my dusty little apartment. Usually, the bed is made.
#######

My evening plans seem to be nixed. I am going to shower / shave (well, actually, I shave while taking a shower, always have, and that must be quite a pretty sight) and get dressed and head out. I may meet LP instead. Gary and I are meeting later. He had his LASIK surgery and it seems to have gone almost entirely well but for a minor and hopefully temporary "tear" one eye. 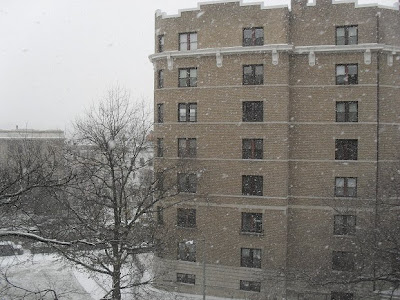 A third view from my apt window. That's the Brittany directly across New Hampshire Avenue. It is a lot nicer than my building.

Concerning the above image, the top corner apartment (visible in the image) fascinates me. I sometimes see lights on in it at late hours -- but the shades are always down. Whoever lives there has this really cool place with a rounded / curved "V" shape to their place that looks directly down New Hampshire Avenue toward 1/2 mile distant Dupont Circle.

In the wee hours when the Moon is nearly full this time of the year, the lunar disk creates a lovely silhouette before sinking behind it.
#######

OK, I now have plans to meet LP at the National Gallery of Art and then meet Gary, so I need to get ready and get the hell out of this apartment, hon.
--Regulus
Posted by Regulus at 1:45 PM

Do you believe in models now? I hope you do

Perhaps I should clarify. I mean NWP models

I believe in both kinds of models now. I prefer the former, though. However, the latter would be more forgiving of what I look like with no clothes on.

Snowing again!!!!
In looking at the pictures of all the apartment buildings around you & thinking about the one you live in & everything...Dang! That's a lot of people to not know. I can't even imagine it.
Good news! Remember how I said I wanted to be an editor someday? My boss told me, She would prepare me to take the job. I know that's vague, but hey, I'm going to take it very seriously. How would you like to work for a small town weekly newspaper? You could be like O'Henry or Quoyle...

At this point, I would do it. But you told me that there was no money and I'd be totally on my own if I came to Oregon ... Or at least that's what I understood to be the import of a conversation we had about six months ago.

i love when you talk marylandese... :)

i sure hope to master the art myself one day...

speaking of models, i think the uda model showed everybody that it's quite alive and kicking...

I enjoy looking at your pictures of the various DC buildings in the snow. It's very engaging to me - maybe I have been in Miami for far too long, but I think it's the way you capture the scenes.