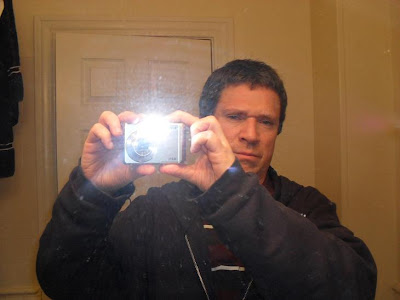 I think I finally figured out how to work my digital camera that was given to me as a birthday present.
#######

My D.C. life is slowly falling apart and I don't know what I'm going to do.

I still haven't been paid for that fucking contracting work but I think I should be by early next week. Not getting paid means I haven't paid my rent or any of my other bills. That should make some robots happy (to the extent they can feel emotions at all) since it confirms the "moral order" of their binary robot Universe.

It is, of course, a disaster for me.

However, that is not the topic of this entry. Instead, this is a political-themed one, even though I did NOT want to post such an entry. I've been infuriated all night at the Senate health care catastrophe in the making.
I'm completely on the side of Howard Dean and those who say this health care "reform" bill that would force millions of working poor Americans into buying a shit product under penalty of law (fines or maybe jail time?) with no cost containment, no competition, but instead billions and billions of dollars in taxpayer money to a criminal racket of the Big Insurance criminals.
As for the U.S. Senate, it is a -- as Michael Lind said -- mostly a "dully complacent millionaires club". Far worse, though, it is also is a house of whores and thieves for every degenerate corporate interest that runs this Empire and the world.
Meanwhile, most of the anger in this country is deflected through "organic" and carefully cultivated religio-insanity by the forces of reactionary corporate intrigue into the kind of teabagging, quasi-libertarian nonsense that enables Big Business to impose a happy-faced fascist dictatorship unimpeded.
Is every empire like this? 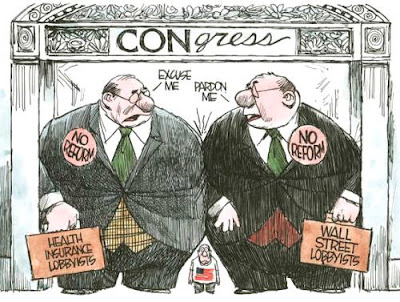 I am embedding Keith Olbermann's "special comment" from Countdown earlier tonight (Dec. 16, 2009) that I found on YouTube. It is in two parts. I realize the copyright police at YouTube could disable the embedding at any second.

The following excerpt from Glenn Greenwald's Dec. 16th Salon column on the current perverted version of health care "reform" being developed by Democratic Senators with the full culpability of President Obama, (source here): 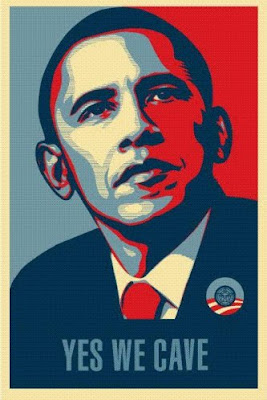 "In essence, this reinforces all of the worst dynamics of Washington. The insurance industry gets the biggest bonanza imaginable in the form of tens of millions of coerced new customers without any competition or other price controls. Progressive opinion-makers, as always, signaled that they can and should be ignored (don't worry about us -- we're announcing in advance that we'll support whatever you feed us no matter how little it contains of what we want and will never exercise raw political power to get what we want; make sure those other people are happy but ignore us). Most of this was negotiated and effectuated in complete secrecy, in the sleazy sewers populated by lobbyists, industry insiders, and their wholly-owned pawns in the Congress. And highly unpopular, industry-serving legislation is passed off as 'centrist,' the noblest Beltway value."

That about sums it up. As for the GOP, they're just in some bizarro parallel Universe of religio-insanity. 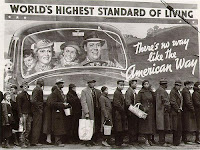 America has turned into a sort of concentration camp for everyone not in the corporate Overclass. In the end, we might have been better off with an economic depression because it would have enabled desperately needed reforms. 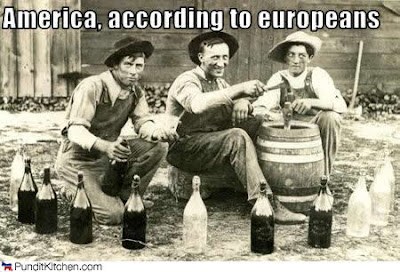 This isn't fully representative of America in her Star-Spangled glory because if it were, there would be guns out the wazoo all over the place.
####### 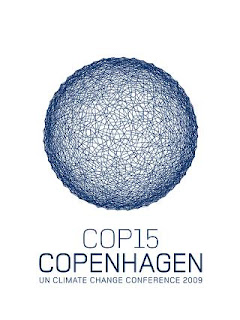 ... not to mention another political disaster in the making, namely, the gigantic United Nations Climate Change Conference in Copenhagen -- "COP15" -- that has fallen into internal bitter acrimony even while degenerating outside the Bella Center into sprawling, overcrowded sideshow with suitable street theatre.

Here is a link to a nice philosophical entry on the Climate Progress blog by Thomas Hilde who is in Copenhagen for the event. Dr. Hilde was my international environmental agreements class professor in public policy school about two years ago.
########

Turning from long-term global climate to the more immediate weather ...

The most recent main weather models, including the GFS and NAM weather models, show a significant snow event here for Saturday. In the case of the GFS, it's a full scale snowstorm. I'm sure it will be a complete bust, as usual. 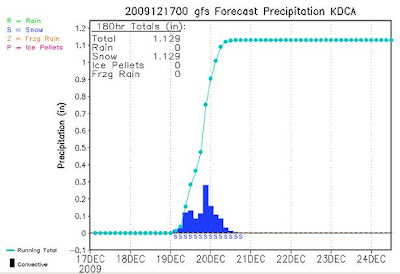 Here is the 0Z 17 Dec 2009 GFS run translated into a cumulative precipitation histogram chart for Washington, D.C. (DCA). The model indicates all snow -- no rain or mixed precipitation -- and using a basic 10-to-1 ratio of snow-to-liquid, the 1.129 translates into 11.3 inches of snow. For Dover, Delaware, it is even higher -- nearly 18 inches.
I'll believe that when I actually see it. 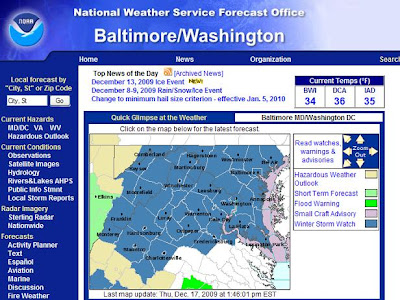 Winter storm watches are already up for the area. 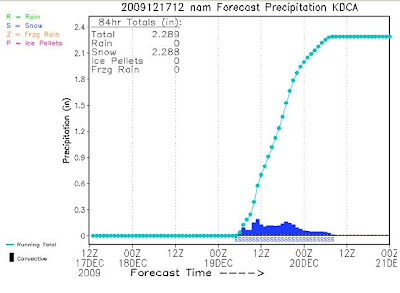 Here is the 12Z NAM run showing the same cumulative precipitation histogram chart for KDCA that I made into a JPEG image. This would equal 22.9 inches of snow under the same 10-to-1 ratio. That is NOT going to happen. We do not live in that kind of climate realty here. However, it is rare to see these plots with such high snow numbers.
####### 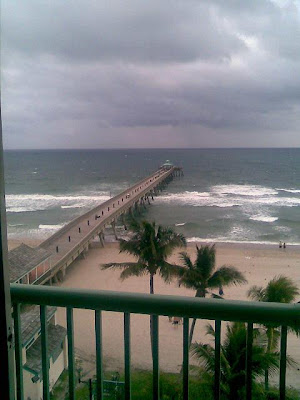 This was a picture taken last week (Friday, Dec. 11th, I believe) by Gary from the 6th floor of the Howard Johnson Plaza Resort in Deerfield Beach, Florida on a stormy day. Chris T. stayed in this hotel while Gary used the Boca Raton "hotel" to stay overnight. This is the same hotel Chris stayed the last time we were all there. I could not go on this last trip.
That's about all for now. It's nearly 4AM and I'm up -- as I usually am these days -- watching late night television. This includes The Golden Girls and Cheers on Hallmark and then The Cosby Show and Three's Company (and if I'm up all night, MASH) on TV Land. However, tonight I'm not actually researching / writing any reports.
My next planned update will be over the weekend.

So basically you're saying that the healthcare reform has morphed into yet another conveyor belt whereby public money will be transfered into the private sector. Hmmm. Well done, Dems. "Yes, we cave", ha ha ha

As of 5 min ago I'm done with teaching for this year. Yay!

"So basically you're saying that the healthcare reform has morphed into yet another conveyor belt whereby public money will be transfered into the private sector..." That would be a BIG, RESOUNDING "OUI!", which is French for everything wrong with the U.S.

Congrats on being finished teaching students. I keep forgetting that you do that.

Actually I don't mind the limited teaching duties. Today, I interviewed the last three students. They don't call it oral exams here I guess to avoid any misunderstanding:-)
It's nice to interact with those very young people who are just learning how to simulate particle decay and code it in C++. As always I feel that I go to easy on them when it comes to evaluating their work. Oh well.