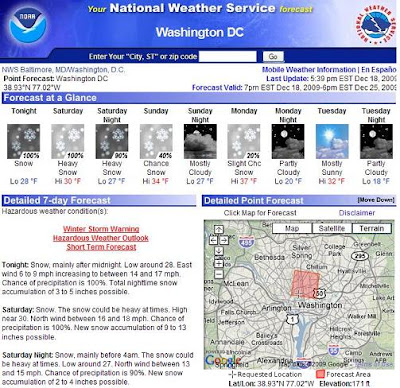 OK, just a weather update even though it is the 6PM hour on a Friday night and I need to meet Gary and Chris T. later. This entry includes a number of weather-related images relevant to the developing situation. 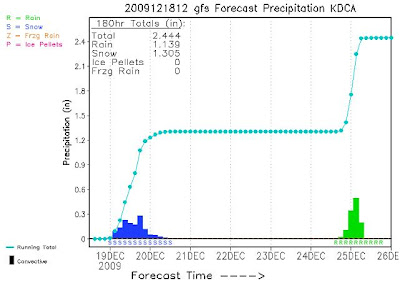 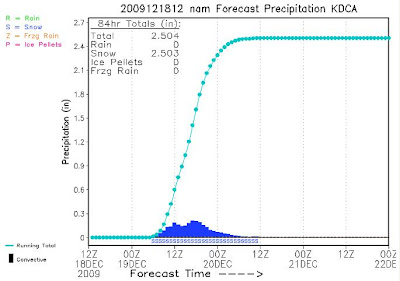 The same DCA cumulative histogram based on the NAM model's 12Z 18 Dec 2009 run. This model's time domain is much shorter than the GFS model (84 hours instead of 180 hours). It shows 2.504 inches of precipitation -- or 25" of snow at DCA proper, which would make this basically tied for the greatest D.C. snowstorm of all time.
#######

We are still on track for a snowstorm potentially of historic proportions, by which I mean 15 to 20+ inches even in D.C. proper. This situation is quite similar to the Jan. 1996 blizzard -- although in that one, some sleet mixed in along the Potomac River that really cut down on the accumulations at DCA.
I've never seen such a huge area under winter storm warnings -- virtually all of Maryland except the extreme southeastern Delmarva, where it is a winter storm watch, all of Delaware, all of New Jersey, and an unusually large swath of Virginia. As for New York, Nassau and Suffolk Counties on Long Island are under a blizzard warning. 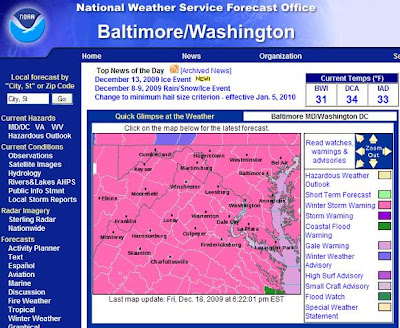 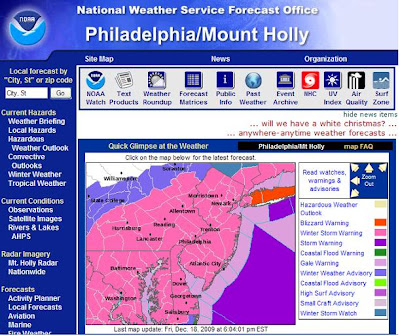 Here is the Philadelphia / Mount Holly (PHI) and New York (OKX) CFA's. This shows the blizzard warnings up for Long Island. 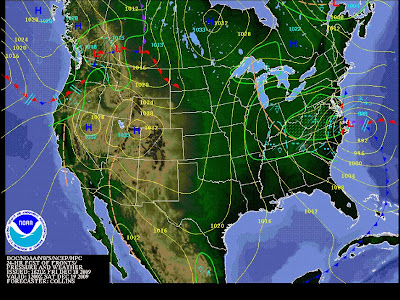 My friend Joe is stuck in San Francisco where he was attending a NASA meeting this week. He was supposed to fly back into Dulles early tomorrow morning. He is disappointed he will be missing a D.C. snowstorm -- although living in Boston for many years, he has certainly seen his share of blockbuster snowfalls. Just not in D.C.
By contrast, my D.C. area native friend LP who has been in Las Vegas this past week and was supposed to return early Sunday, does not mind that he is missing it. As it is, his scheduled return is doubtful and but that is doubtful. However, he has decided to extend his vacation -- having rented a car and driving to Utah. 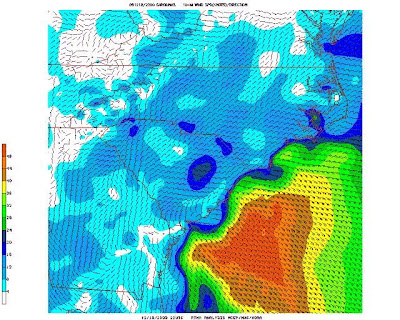 The above plot is an interesting one: the RTMA 22 UTC (5PM EST) 18 Dec. 2009 analysis of 10 meter level winds as measured by an array of ground stations and offshore buoys in the coastal Southeastern U.S. The yellows, browns, oranges, and sienna hues show winds in excess of 36, 40, 44, and 48 knots, respectively.
The center of the surface circulation is about 50 miles west of Savannah, Georgia. The surface (and 850mb) winds show the all important low-level jet inflow into the storm. This is occurring along the South Carolina coast, rather than off the North Carolina coast or Virginia capes. This bodes "well" for the nor'easter to effect the D.C. area.
#######

I'll post in a subsequent entry info about the top ten biggest Baltimore/Washington snowstorms. Here is a link to them.
--Regulus
Posted by Regulus at 6:19 PM