The Blizzard of December '09 (Part I) 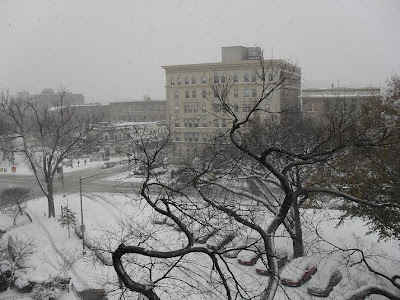 We are under a blizzard warning in the Washington / Baltimore area ... That's not a sentence I will probably get to write again for many years, if ever. 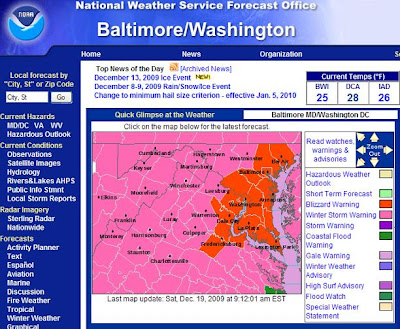 This snowstorm ranks up there with the biggies in my life both here in the Washington / Baltimore area and earlier in New Jersey. I'm talking about 1996, 1983, and 1978.
DCA is certainly going to break its Dec. snowstorm record of 12.0" set in 1932 (a pre-DCA Washington, D.C. record). Likewise BWI at 14.1" in 1960 and 12.1" in 1969.
As for the all-time biggest snowstorms, this one will rank up there, too, but I'll post the top 10 list once this storm winds down.
The low is bombing out in classical nor'eatser fashion with the center near Kitty Hawk, N.C. -- right in the North Carolina OBX "slot" where you want it to be. It will move up the Delmarva and Jersey coastline by later this afternoon. 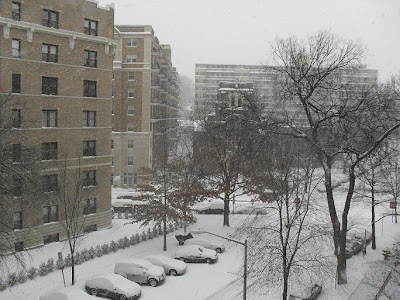 That's all for now. I have Gary over. I sort of need to go back to sleep for a bit. Despite the excitement over the storm, I do not feel well.
--Regulus
Posted by Regulus at 10:07 AM

Hi Regulus
I'm enjoying the pictures taken with the new camera. The snow picture is nice. I'm not that fond of snow in the city, myself. I do love the way everything in the city seems to be somehow nicer...cleaner & even benign when covered with a fresh coat of clean white snow. Unfortunately, it quickly becomes dirty, ugly,& trampled & the city appears even dirtier & more polluted then it was before. It makes for a great metaphor though.

Yes, you are right: it makes for a great metaphor. My current entry has some pics of the freshly fallen snow.