I was going to wait until after midnight to post this entry so that the date on it would be Nov. 10th but the way my day is working out, I will do it now. 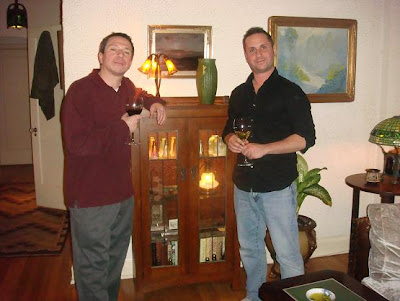 Some of images in this entry are partly from digital camera pictures that Gloria took the past two Saturday nights -- that would be Halloween at Phil and Stephanie's place in Adams Morgan and last Saturday night at Chris T's place just, which is sort of Adams Morgan - Kalorama-y neighborhood. Hence the much better quality of the images. Gloria is visiting from Peru for two weeks before returning for her final 8 months there.
#######

I'm sure Kristof will have something to say about this image ... 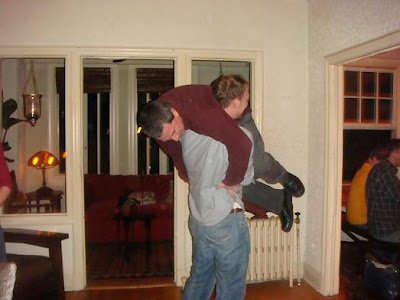 Some of the other pictures were taken by me on my crummy cellphone camera over the past few days, including last Friday on a nice fall day around Dupont Circle and one of my mom on Sunday at the Prince George's Plaza Target where we went after brunch in College Park at Plato's.
####### 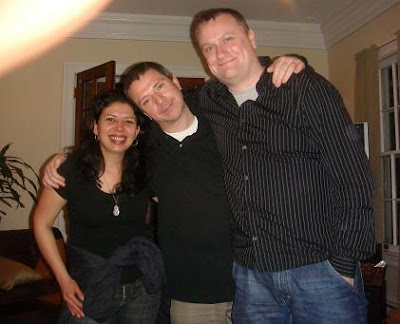 For starters, I have to finish two major assignments for my contracting job totaling approx. 50 pages of work. The latter one I have a bit of a reprieve in that I can work on it until next Monday morning. There is another one due tomorrow morning by 9AM -- since my boss knows I typically work all night on these reports as I work best in the wee hours.
#######

Indeed, I was up all last night until 6AM this morning, finishing my biweekly climate change news compendium and a "thought-provoking article" series for my boss's boss. The two most interesting articles were from The New York Times. 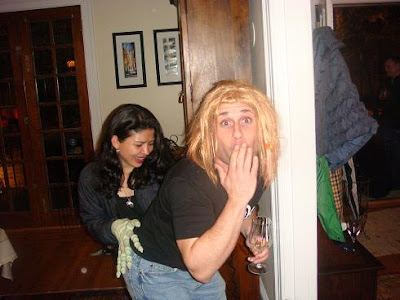 Another Halloween night 2009 picture of Gloria and Gary. This picture speaks for itself.
#######

The first article was a big (nearly 8,000 word) piece about how the Intermountain Health network has managed to lower mortality rates for a variety of diseases by in a sense standardizing the protocols that doctors follow. The second article was -- speaking of cell phone cameras -- how with a few minor changes, a basic cell phone camera can be made to mimic an expensive microscope -- except it does it electronically using LEDs that can generate hologram images in lieu of optics. Quite fascinating.
####### 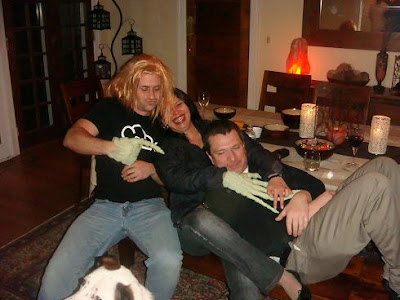 Gary, Gloria, and myself (and Oliver just barely visible) from Halloween night, 2009.

Also concerning The New York Times, Frank Rich's Sunday piece and Paul Krugman's Monday op-ed are well worth a read, both dealing with the sad farce that the Republican Party has become.
#######

This picture was taken Saturday night by Gary at Chris's place ... 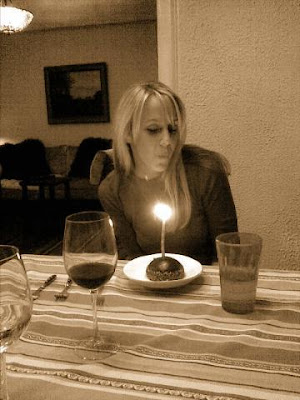 Speaking of health care, I don't think anything is going to pass -- or at least nothing meaningful. It never will. Ditto climate change legislation. Obama and Senate Dems will fail to deliver on both. For that, they basically deserve to lose big next year, all the more so because of their shocking cave-ins to Wall Street billionaire crooks who after their crimes got to steal the Treasury, no questions asked, and return to their sick, economically and socially destructive ways. 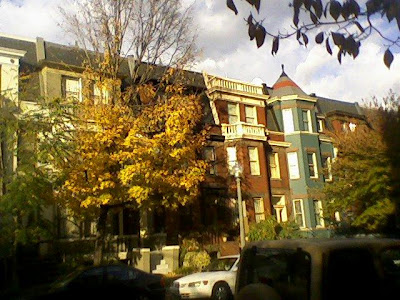 A few more thoughts on the NY Times and on D.C. newspapers ...
The New York Times is INFINITELY better than the Graham Family Syndicate's crummy Washington Post. The WaHoPo (as some of us call it) could really go bankrupt tomorrow and no one except the Beltway insider circle jerk crowd would even remotely miss -- and even then they'd have POLITICO with its "Republicans Always Win" slant or vapid The Hill to fall back on. CQ is good in terms of tremendous substantive political and legislative coverage.
As for The Washington Times run by rightwing impresario Sun Myung Moon, well, it just exists in its own alternative meta-reality, but like the teabaggers and the Republican Right in general.
####### 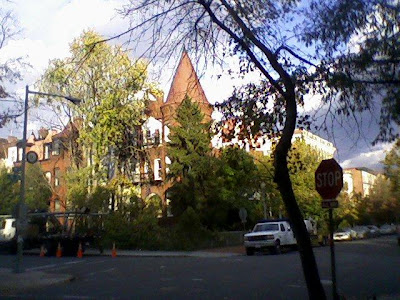 Anyway, I only got 3-1/2 hours of sleep because I still got up at 1030AM even though I went to bed around 6AM and didn't fall asleep until it was dawn around 7AM. I have to pull another "all nighter" tonight, too. 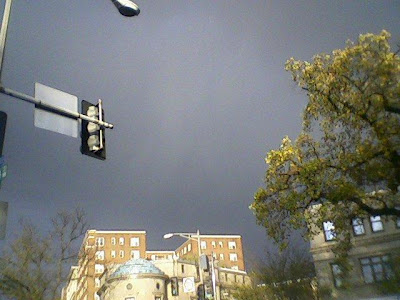 A stunning contrast between stratocumlus / nimbostratus clouds with rain showers falling from the, illuminated by the low-angled Sun in the southwest as seen at the corner of U and 16th Streets, NW, and New Hampshire Ave., NW, Washington, D.C., 4:09PM, Nov. 5, 2009.
That is my apt. building (the larger brick one).
#######

I was sitting here waiting for some email to come from one of my colleagues to update for the umpeenth time the report I need to write tonight, which deals with NRC's international programs, priorities, and agreements.
I ended up talking to her on the phone -- and at 24 minutes, I went over my monthly allotment of 900 minutes by about 15 minutes or $1.50, which after taxes and fees probably works out to about an extra $50. 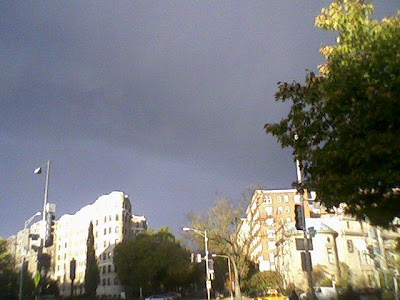 Another stunning contrast of stratocumulus / nimbostratus clouds and low-angled sunlight, U and 16th Street and New Hampshire Avenue, NW, 4:09PM, Nov. 5, 2009. The building across the street from me is the Brittany (the rounded one). I'd love to have that top apt. looking SW toward Dupont Circle.
#######

Anyway, it's a cool November evening with skies clouding up but the anti-weather magicians at LWX managed to work their usual magic and squash any real chance of precipitation. The Sterling LWX folks are NEVER HAPPIER than when they can "scale back the POPs to slight" or even "remove altogether." That's their goal in life -- it's what animates them and keeps them whole. Why most of them ever went into meteorology as a career profession is beyond me.
Well, we're still above normal on precip. for the year overall by 2.07", 3.17" and 6.61" at DCA, IAD, and BWI, respectively. 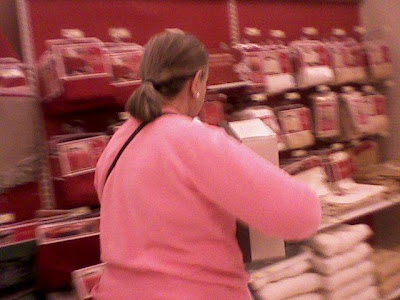 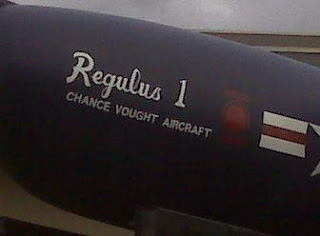 It is a cell phone photo was sent to me today by Jason and Ron, who are on holiday in Hawaii.

This was taken from the USS Arizona Memorial. I guess that was a World War II fighter plane.

As you may know, I've long had a weird idea that I lived another life during WWII. Specifically, I was born in Iowa in 1921 and went off to WWII at age 21 and was killed in at the Battle of Midway in 1942. And, yes, I was gay in that life, too, although I guess it would've been rather different then.
####### 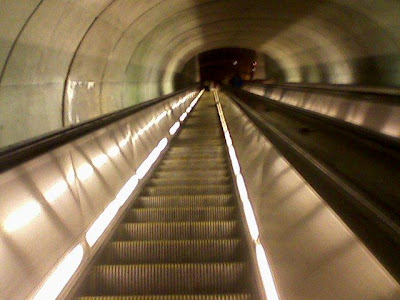 I think that's about all for now. It's Monday evening and the start of 16 back-to-back episodes of The Golden Girls, oh, except for an hour long Ghost Whisperer interlude, on WeTV.
Barring something tremendous (good or bad), I will not be updating this blog until the Friday - Saturday time frame. You'll live.
Yours in Plush Hippos,

:) you and GP look pretty loaded!

where is the big dude carrying you to? i hope - not the small claims court... :)

That would be Damon G.

No, he wasn't carrying me off to small claims court or debtors' prison.