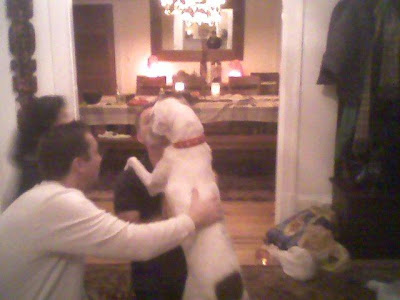 What a wet Halloween, except I don't have any good Halloween night pictures to post. Boo.
Drenching rain is falling across the Washington, D.C., area. The LWX (Sterling) forecast for D.C. proper says "less than a tenth of an inch" of rain but that's just wrong. The forecasters at LWX will never admit they were wrong, of course. It just goes down the memory hole.
####### 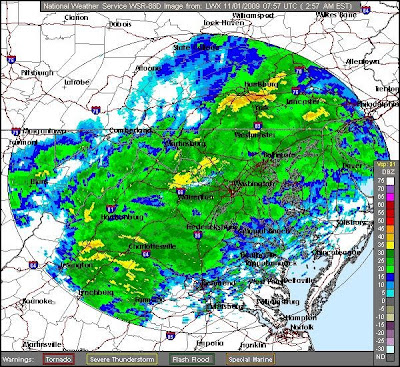 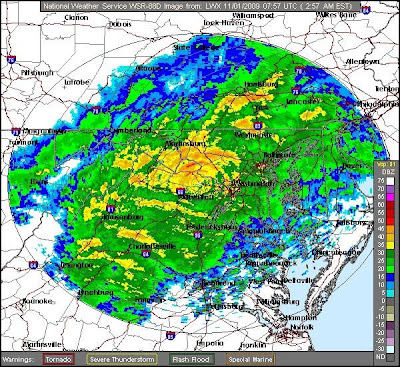 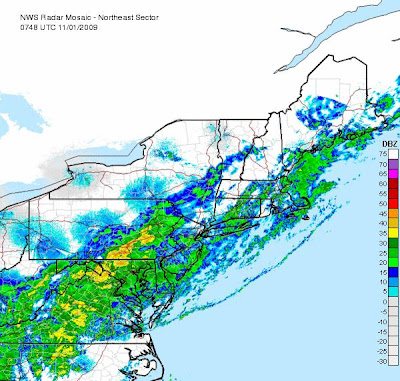 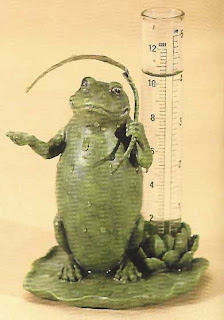 Tonight, I went to a party at Phil and Stephanie's that was initially for Gloria, who is in D.C. for a week or so. The whole gang was there (except, of course, Kristof). Gloria is actually just over half way through her planned 18 month World Bank tour in Lima.

I fell asleep on the floor and woke up at 2:25AM -- Standard Time, so it was really 3:25AM daylight time, but my cellphone had already adjusted itself.
While walking through a chaotic, mobbed, drunken Adams Morgan down 18th Street from Phil and Stephanie's place in the pouring rain, I asked a police officer standing at the corner of 18th and Columbia Road -- the MPD police were out in BIG TIME force tonight -- and she (a young African American lady) went to look at her watch and realized she wasn't wearing one and yelled, "FUCK ME HARD!" I simply said, "Thank you, officer" and walked on. I also saw a man with a very bloody and messed up face sitting on the sidewalk with the police around him. Sometimes Adams Morgan is just so fucked up.
As for me, in my own little world, I wanted to go to Cobalt but it was too late since last call is 230AM. When I saw it was 2:25AM, and then the minutes kept ticking by ... 2:35AM ... 2:45AM ... and so on ... I was secretly hoping that my cellphone would readjust itself back an hour but it had already changed to standard time. Just as well.
In any event, I'm home now ... and I didn't spend a PENNY today, although that wasn't the goal per se.

I came across this picture earlier on the New York Times Web site ... 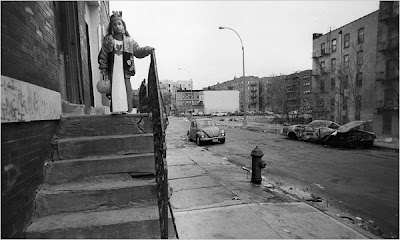 The South Bronx, New York City, Halloween Day, 1991
This photo was at the height of the urban ghetto crack wars of the early 1990s such as in New York's South Bronx. Read here for the story about this picture taken by New York Times photographer Ángel Franco and what this young lady, Guissette Muniz, now 24, is up to today. That location, by the way, is much improved today.
####### 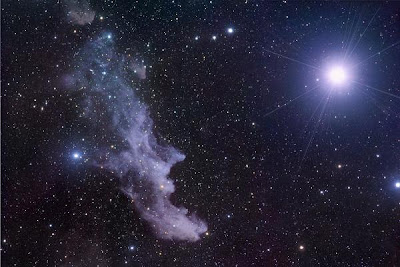 Apropos really of nothing ... 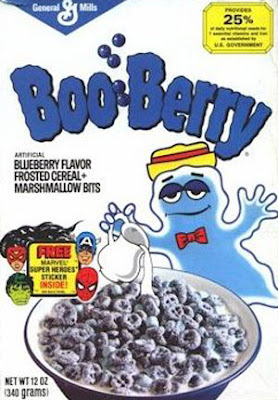 Happy Halloween, Mr. Boo Berry
Mr. Boo Berry talks like Peter Lorre, except the voice over was by Paul Frees, who was quite an interesting person in his own right.
Here is one of the first Boo Berry commercials from 1973 or thereabouts ...

I had forgotten about the weird Franken Berry -- Count Chocula rivalry. These are all part of the General Mills "monster-themed cereals."
Now if my blogger buddy Bryan were still here, he would have read this and sent me a box of Boo Berry cereal.

Oooh, and I remember this Lite Bright commercial, too (I actually had TWO Lite Brights) ...
Building on what I saw in a YouTube comment: "Light bulb not included?!? DAMN YOU TO HELL, YOU BASTARDS!!"
####### 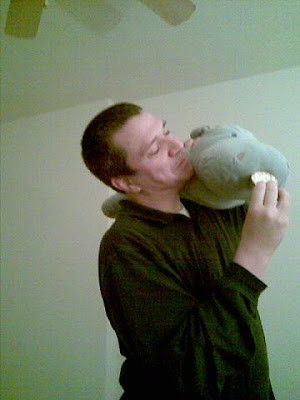 Here is my delightful little hippo eating a cracker. What a good plush hippo. I love you, Flippo.
#######

I'm so far behind on everything. I really need to focus and concentrate and not update this blog for a least a week, except I won't do that 'cuz I can't. Yet I have to -- otherwise I don't finish my intellectual "piece work "and don't get paid. Now I'm really scared.
Anyway, I need to go to bed right now.

Glad you liked the exchange -- and right there in the pouring rain on a chaotic 18th St and Columbia Road intersection.

The party was mostly fun, except for one hiccup involving (as usual) me and Aimee. She and I just don't really get along.

i didn't quite get her part of the exchange...

btw, galina and i just came back from a week in costa rica. i say this because although we didn't see any hippos, we saw the next great thing after a hippo - a manatee!

for some reason (and that was not because of any physical resemblance whatsoever!) i thought of you when i saw it...

That's just it -- that's all she said. I asked her the time, she looked at her wrist and saw her watch wasn't there, and blurted that out.

Also, as long you weren't reminded of me because of any physical resemblance ... whatsoever ... to that manatee.

Between you and Galina and Gary, you guys regularly span large parts of the globe. That's pretty good for a rag-and-bone-man's wages (you) and a spokesmodel's income (Gary).

Love the picture of the little girl & the story. That is a once in a lifetime shot. I'd love to get something like that!

i am truly honored to be mentioned in the same sentence with such a renowned time-and-space binder as garyP!

anyhow, except for a bad attitude of the flight attendant (she actually threw the guy off the plane for angrily stuffing his bag in the overhead compartment) on our final leg home from charlotte, nc, to bwi - we really had one of the best times of our lives!

later i'll show you the pix!

she actually threw the guy off the plane

Oh Mike please tell me it was before takeoff.

Also, Reg, I'm a little hurt. I may not look like a manatee but I do travel a lot too you know. And yet not only was I not mentioned in the same sentence with Gary but I was not mentioned at all.

IT IS HERE THAT IT HURTS:-)

believe you me, had she had the ability to throw anybody off the plane during the flight - she most definitely would have!

yeah, i was a bit mystified by your absence from the list of distinguished cosmopolitans :), yet some part of me (and i am not saying i am proud of it!) was happy that yet again russia was ahead of poland...

makes me wonder if she was also a flight attendant on this plane.What a weird story.

I didn't mention Kristof in that comment because his European stint was a kind of involuntary one, not Gary jetting off to Paris and London or heading to New York for the weekend, clubbing at some Manhattan VIP lounge at 4AM.

So what happened to the man she threw off the plane? Was he arrested and thrown in the Gitmo brig?