The House at 2 Flax Lane, Then and Now, and a Lost Jersey Boy 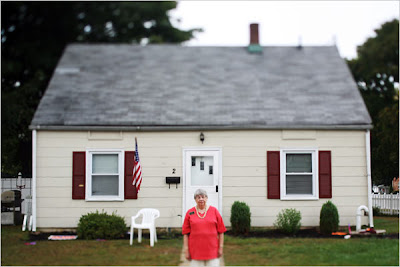 THIS Levittown, New York house at 2 Flax Lane -- a tiny sliver of a street connecting Sunrise and Old Oak Lanes -- is apparently the LAST one that is WHOLLY and COMPLETELY unchanged for how it was upon its construction.

This picture appeared in The New York Times online in October 2007 as part of a slide show (it's slide 4) accompanying this story. The occasion of the article was the 60th anniversary of the arrival of the first families in Levittown, the first suburban development of its kind in the United States (and thus the world).
The article discussed how the homes in Levittown have changed so dramatically in physical appearance and size over the decades. The neighborhood itself has changed as the number and size of the trees got bigger, too, since Levittown was basically built on what had been empty fields. 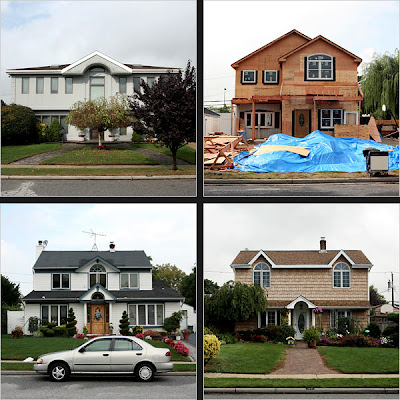 Here are original Levittown homes that have changed significantly over the years. 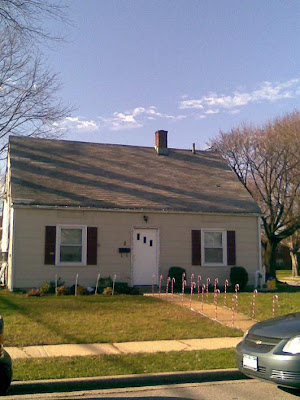 Gary took this picture of the house at 2 Flax Lane earlier today. He was on Long Island visiting his dad, sister, and step mom for the Thanksgiving holiday.

In the intervening two years, the house is still unchanged -- except the storm door seems to have vanished. Those little bushes having grown a inch, or else they are trimmed regularly. 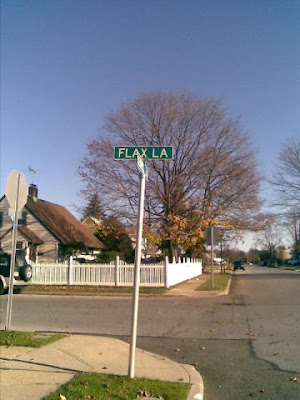 That is evidence of the housing bubble whose bursting has thrown us into such a terrible economic condition. It was part of the Bubble Economics that basically has defined the American economy for the past 20 years and that the corporate powers that be were able to create their multi-trillion dollar Ponzi schemes and grand mal thefts. 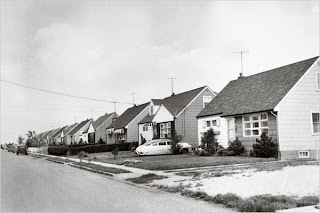 Yes, it's true the Levittown house are bigger and with more amenities than they were in 1947 -- except perhaps for the one at 2 Flax Lane -- but that does not explain the tremendous housing inflation rate. Look at any municipality in the country and you see this evidence of this bubble.
The worst places for this bubble are in Las Vegas, Phoenix, and other flat, sprawling, arid, mind-numbing parts of the U.S.
####### 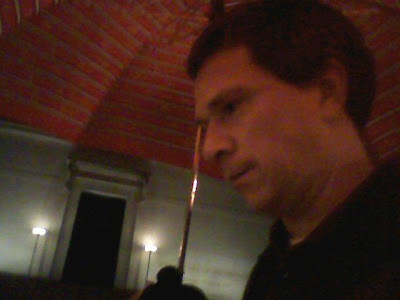 Yours truly during a burst of heavy rain at the 2AM hour, Nov. 27, 2009 as I walking back from Cobalt after Thanksgiving and my birthday on the 26th. I went to Cobalt and Windows with Damon and Chris T. That picture was taken in front of the Masonic Temple on 16th Street, NW, Washington, D.C.
#######

I need to finish one of my reports for that contracting job by Monday and several other projects by next weekend. However, I will not be getting paid until the second half of December OR THEREABOUTS and I will be rather late on my rent. The calendar and accountant's visit are working severely against me this month. I'm not sure if eviction proceedings start before 30 days. The fact that it will be the Christmas holiday is good, I suppose, since it means things will move slower. 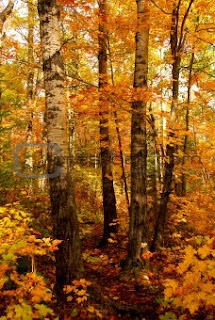 Even if proceedings are started as early as Dec. 15th (which I don't think they will be but I'm assuming nothing now), I should be able to pay my rent by around Christmas, which will end them -- only to be restarted the next time around. It takes 3 to 4 weeks for a case to get to landlord - tenant court from the time its filed. That would put it at some point in mid-to-late January, which is why I think I'll be OK this time around.

I THINK I will be in better shape in January but I'll probably still have to give up this place in Feb/March time frame, and I've no idea where I'll be going. Things aren't going to turn around and I'm not going to be getting a real, financially sustaining, career affirming job any time soon, if ever.
Oh, yes, it looks like ALL my student loans -- $206,000 -- are consolidated as Direct Loans and I got a one-year economic hardship deferment. By this time next year, I should have discharged my credit card debts in a second bankruptcy, assuming I can afford to file for a chapter 7 by August. 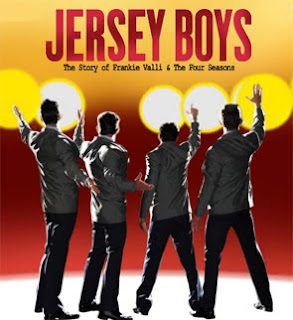 Tonight, I'm going to Chris T's place for our Saturday night dinner party. Tomorrow, I'm seeing my mom and Ray. They are coming into D.C. and we are going to the National Theatre to see the campy musical Jersey Boys.

If it wasn't for the good news from Sheridan I don't know what this day would have been.
He moved in with a very suitable friend. They're making their own curtains. Apparently his friend is very good with the needle. He has prizes for embroidery...

More to the point, it's a beautiful entry!

The Levittown story reminds of my friends place in Venice Beach CA. She lives in a few blocks from the boardwalk in a cottage that her parents bought in the 50's. It is rather quaint & fairy tale like because everyone else sold out to developers & those ugly stucco Califoria McMansions tower all around it.

As I recall, Onslow and Richard give each other a kind of wry look.

Rita -- That sounds like its worth an entry with pictures.

I forgot how funny this show was. Anyway, again, a very moving entry. Nostalgic.

Actually, they used her house for one of those L.A. reality shows, "I Dated Your Mom" or something equally stupid. I blogged about it a couple of years ago. They paid to use her house, pretending it belonged to a Hispanic family (the truth being, in that neighborhood, Hispanics are only the worker bees, never the 'hive' owners). There was really no reality to the whole show. :)

Kristof -- I just saw "Jersey Boys" at the National Theatre with my mom and Ray. I really wish you could see that musical play about the life of Frankie Vallie and the Four Seasons. I think you'd like.

Hey Rita, I find your comment pretty amusing, "(the truth being, in that neighborhood, Hispanics are only the worker bees, never the 'hive' owners)".

It's funny you mentioned that. Are you from Levittown? Were you raised there? I grew up in Levittown and I'm "hispanic" as you like to call it. My parents owned a home in Levittown, and I know of plenty of "hispanics" that owned homes in Levittown dating back to the 50's throughout the 80s" (my family being some of them). Surprised? This house that you point out that was in the "reality" show actually was a doctor’s office years ago for the neighborhood. Better yet it was my doctor’s office when I was growing up in Levittown. I bet they left out that little piece history. Next time stop running your mouth and post some real useful information.