A Rainy Late Night on the Avenue in the City Beautiful, and American Debtors' Prison (Parts 2/3) 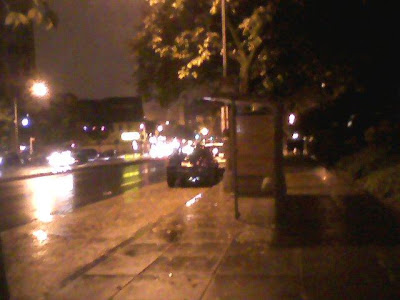 OK, this is my promised entry of my admittedly crummy cellphone camera pictures from the rainy Sunday midnight hour, which is to say late Saturday night into Sunday morning, here in D.C., in particular the ones I took while walking by myself along Connecticut Avenue toward Dupont Circle. I had left Chris T's place a bit early from one of the Saturday night dinner parties with him, Gary, and me. 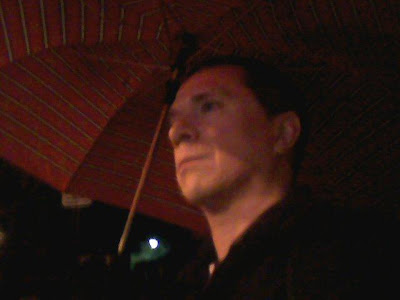 The reason this area was particularly evocative on this rainy night is that I once had a powerful dream a number of years ago in which I was walking down this sidewalk on a very rainy night. It became more of a flood that I was riding along, and somehow I knew my mom was at the bottom of the hill waiting for me.

I tried to call her to tell her that last night but she didn't answer the phone. She goes to bed early.
Oh, yes, this hill is also part of the fall line that I discussed in my Saturday, Oct. 17th entry.
Thereafter, I walked over to 17th Street and went to a crowded Windows before going to Omega for a little while and then walking home by quarter to four in the morning. 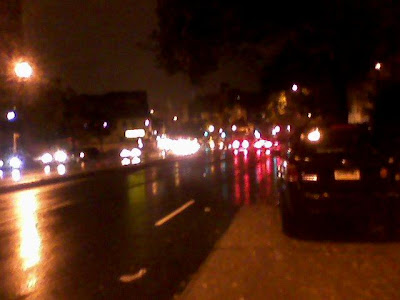 On a personal note, this week promises to be a very shitty one if only because of my impending small claims court date Wednesday morning. I basically have no choice in the matter but to agree to a settlement between $45 and $60 a month and pay until mid spring 2010 (for the next 4 to 5 months), assuming I actually can get enough work to do so, and then walk way from it and my other two agreements ahead of my next chapter 7 bankruptcy. 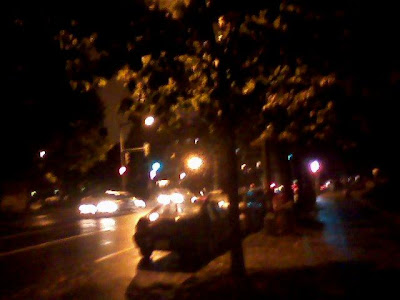 My primary goal is to avoid bank account seizures or wage garnishment, which could happen despite the fact I have earned an average of $1150 per month this year, varying from $0 in May to $1975 in July. (I was able to "live" through June because of the substantial student loan refund from last January.) My secondary goal is to avoid a legal judgment against me, which is to say just having the judgment there itself. 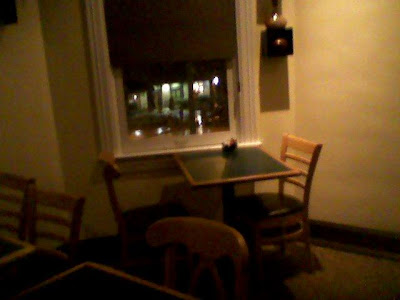 Adjoining Windows is Dupont Italian Kitchen and the picture below is the upstairs (second floor) corner table that overlooks the intersection of 17th and R Streets, NW, 1:28AM, Oct. 18, 2009.
Sigh.

Kristof and I used to sit at that table and have "sophisticated conversations" while drinking. Well, maybe not sophisticated ... more like gawking at the passers by on the sidewalk below while I complained about, well, basically everything.
#######

As for my student loan debts, they are basically non-dischargable student loans and at least a portion of them (the Citibank $34,000 portion that is still rising on interest and fees) is a big mess, but those I can take care of those by wrapping everything (even defaulted ones) into a giant ($127,000) consolidated Dept. of Education Direct Loan. The next part is to see if I can get an economic hardship deferment. My variable monthly income that has been going over and under the monthly limit of about $1350 makes it tricky. 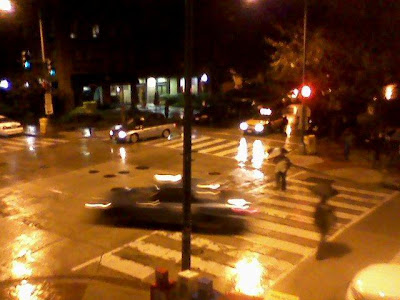 The wet intersection of 17th and R Streets, NW, Washington, D.C., 1:29AM, Oct. 17, 2009, as seen from the open window in the upstairs part of Dupont Italian Kitchen adjoining Windows. This is at the table that Kristof and I used to sit.
Why are there so many randomly scattered manhole covers at this intersection and the adjoining sidewalks??
#######

I am supposed to get paid $790 on Thursday from my contracting job. While $330 of that will disappear on assorted bills, it will leave me with enough for a few weeks of spending money. (If I don't get paid on time, then I have dire crisis as I'm down to my last $45.)
I actually have a lot of contracting work -- writing reports -- to do for the next month, indeed, it is almost too much given in what starts and stops I tend to work in, and how terribly distracted I get. An even bigger problem is that a $1,000 assignment is contingent on the cooperation of individuals in a particular Federal agency's office, but there may be an "in" there as a result of that senior level official director whose attendance at a conference I was able to get last month.
#######

Oh, yes, the rainy spell finally ended but the weather remains cool (which is fine with me). Here is the view as I walked down New Hampshire Avenue earlier today. 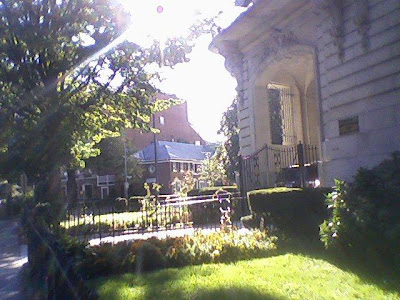 This is actually the headquarters of something called the Order of International Eastern Star, which seems to be related to the Freemasons, whose Supreme Council No. 33 Headquarters is located a short distance away on 16th Street, NW, literally 1500 feet from where I live.
#######

As for tomorrow (Tuesday) morning, I am going to a CQ - Roll Call climate change conference at the Ronald Reagan Building down on Pennsylvania Ave. I'm supposed to attend the 9AM main session and the 1045AM "breakout session" on carbon markets. If climate legislation is ever actually passed by Congress and signed into law, perhaps my hope of working at EPA or even FERC or CFTC in this area can be realized. Probably not. 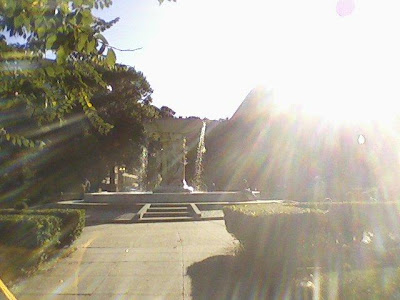 The Dupont Circle fountain on a brilliantly sunny, cool fall day, Washington, D.C., 4:22PM, Oct. 19, 2009; I believe that weird vaguely purple disk is how the Sun appears in my cellphone camera pictures.
#######

On a totally unrelated note, I seldom (if ever) talk about local D.C. political news (by which I mean mayoral and City Council stuff), but I think this story warrants comment ...

The story actually took place a few weeks ago with the vote in question on October 6th and subsequent recriminations.

The D.C. Council voted 7 to 5 on Oct. 6th to reject D.C. Mayor Adrian Fenty's eminently qualified and by all accounts hardworking, professional, and caring nominee to head the D.C. Department of Parks and Recreation (DPR) when it rejected Ximena Hartsock, a former D.C. public school principal who had been the Acting Director of DPR since last spring. 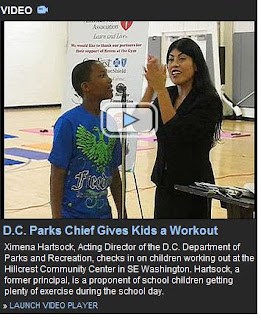 Here is a picture of Dr. Hartsock with a young man at Hillcrest Community Center from a video clip embedded in the online version of a Washington Post article on May 28, 2009.

The Council's vote -- in which the erstwhile "Mayor For Life" Marion "Mobutu Sese Seko" Barry did not vote because he was sick, but he would have made it 8 to 5 -- was apparently based on a lot of factors that had nothing to do with Dr. Hartsock's qualifications and everything to do with its anger at the mayor for an assortment of unrelated and here irrelevant reasons. Her confirmation process had also been way unnecessarily ugly -- for which some of the Council members actually apologized.

The Washington Post editorial on Oct. 7, 2009 on the vote had it right. The D.C. city government is historically dysfunctional and broken enough without the Council doing something so shabby and venal to a person of Dr. Hartsock's qualifications, abilities, and record.

On a personal note, she reminds me a bit of my friend Fanny who is back in Mexico doing post-doc work.
#######

OK, that's about all for now. I'm not going to update this blog again until about Thursday -- after my NEXT small claims court date that is set for Wednesday.