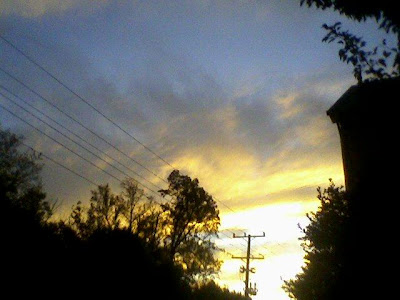 This entry contains some images that I took over the weekend, in particular Sunday evening on a short fall sunset walk with LP in Rockville and Bethesda near his Grosvenor Park place. They are interspersed in a topically unrelated entry.
Let me say at the outset that barring some big noteworthy event, my next planned entry update won't be until Saturday as I have a lot of contracting work to do with multiple assignments. 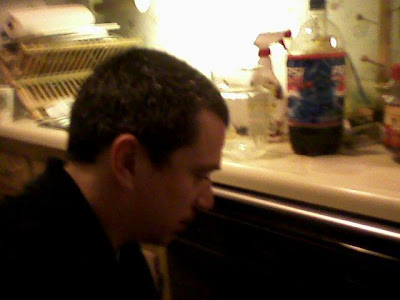 My problem and big worry is that I won't be getting paid the money that will be going to my November rent until very late in the month, on or about the 20th, ten days after the deadline and with a $45 late fee (and possibly ending up on the monthly eviction list, which apparently is put together on the 15th.
Basically, I will basically be 3 weeks late after the 1st of the month and I'm not sure what their response will be. 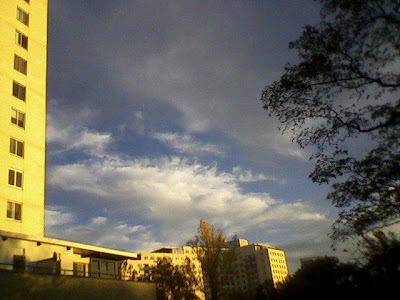 I am going to write a note to the property management company, specifically, the lady who oversees my building's rental collections. One way to avoid this is to have my check expedited instead of waiting for the biweekly visit of the firm's accountant, but I've already asked for this multiple times. I think it takes at least a month to be evicted. If I am, I'm not sure what I'll do. 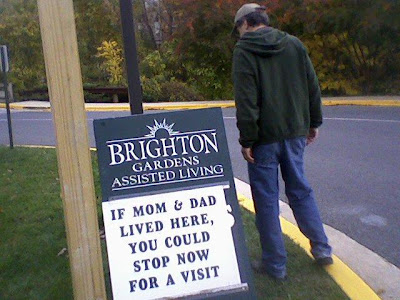 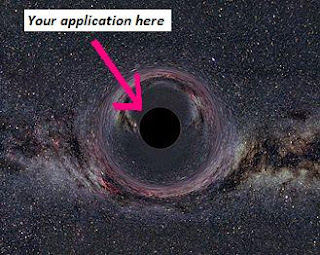 Today, I only did a minimal amount of work for the job -- but that's because I did my laundry, grocery shopping, and applied for five, yes, FIVE, jobs, although all were online (a lousy way to apply but required) and four of them were with one large contractor whose career Web site is basically a giant black hole into which seven previous applications of mine have gone, forever to disappear into a "deferred" state, and I find it very irritating.

Then there is my hope of getting a Federal job, esp. with EPA. To quote the line from my previous entry by Prof. Michael Greenberger at the conference I attended last Tuesday, good luck with that. 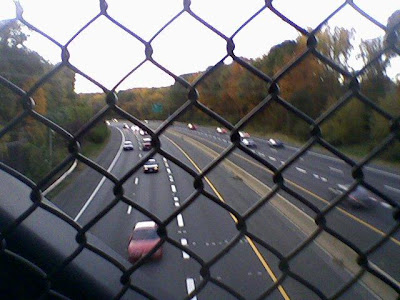 The point of the relating my Monday, though, is to say that my week is now (in theory) freed up to do other work. That is why I cannot update this blog until the weekend -- it's too distracting for me at times.
Oh, yes, I also managed to lay the groundwork for an interview in the relevant section of NRC for one of my contracting jobs.
As for the Capitol Hill scheduled three day hearings on S. 1733 I mentioned, I am planning to attend the Thursday session of the Environment and Public Works Committee.
####### 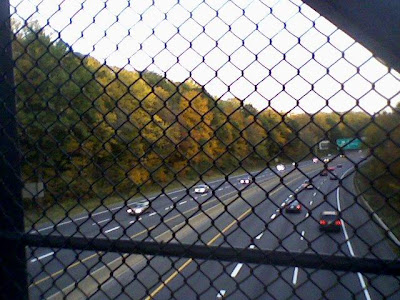 As a follow-up to my previous entry, the New York City area did not get 3 to 5 inches in the Saturday night t-storm outbreak but more like about 1.8 inches. Also, I did not go through my preliminary DCA, BWI, and IAD numbers to make sure they were down to the 0.01 correct for Saturday.
Rain is in the forecast for Tuesday into Wednesday, and in fact, it has started to rain tonight. The fall colors of the trees are near or at peak now.
#######

Speaking of New York City (in whose New Jersey suburban shadow I grew up in the 1970s), I found an interesting Web site on "Forgotten New York" with pictures and write ups about little semi-forgotten corners of New York City. I found a particularly interesting page on Staten Island's Todt Hill. The name "Todt" is a Dutch one for "death," I think because of the Moravian cemetery up there. 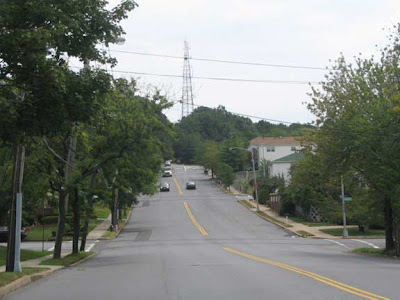 Yes, there is a transmission tower atop it. Here is an image from that Web page showing the transmission tower as seen from the corner of Todt Hill Road and Fine Blvd.
Todt Hill has an elevation of approx. 410 feet above sea level, making it the highest point in NYC and on the East Coast south of Maine (except I thought the nearby closed Fresh Kills Landfill had a higher elevation). Staten Island does not connect well to the rest of NYC or to New Jersey except by a maze of 75+ year old overcrowded, high-speed, dangerous highways.

Interestingly, the highest land spot in the District of Columbia is 410 feet above sea level. It's Fort Reno (and the very top is fenced off for a VORTAC). However, D.C. is not considered "along the East Coast" -- maybe in 500 years with about 30 feet of sea level rise. 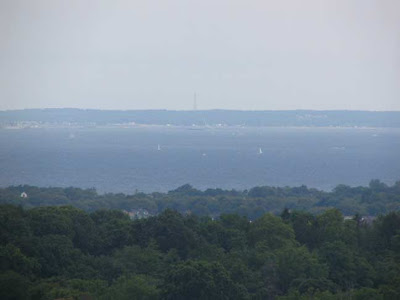 Here is another image from the "Forgotten New York" Web site on the page devoted to Todt Hill on Staten Island with a distant transmission tower in New Jersey visible.
This is the (summertime) view looking through a telescopic lens toward -- I believe -- the south (or SSW), which would make that the northern edge of Monmouth County along Raritan Bay / Sandy Hook Bay near Keansburg/ Middletown Township (not labeled in the image below) located midway between South Amboy, where my mom was raised and my grandmother lived until she died (and my estranged uncle still lives) on Henry Street, and Sandy Hook / Sea Bright (on the upper end of the Jersey Atlantic seashore where I spent my summers, and just north of my home town of Long Branch). 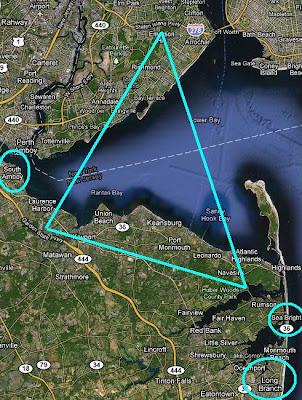 Here I have tried to show what I estimate to be the field of view from the image above. The vantage point is from the top vertex of this triangle -- that's where Todt Hill is located.

The transmission tower in that above image is somewhere between the two bottom vertexes, I'm estimating midway (though it may be a bit more toward the right side one). The circled places are South Amboy, Sea Bright, and Long Branch, respectively.

The above image is especially evocative because I recall that particular transmission tower you can see in the distance, or at least an earlier version of it. (The big microwave receivers were removed, as they were on the one on Stone Hill in New Jersey (Upper Freehold Township) where my dad lived.
I could see the above tower from the now-vanished Tradewinds Beach Club in Sea Bright. It was kind of a weather observation reference, too, since weather often came in from the northwest.
More generally, you could also see NYC on the northern horizon on clear days and nights.
I believe Mr. Sirius's slightly younger and taller self is from Staten Island. 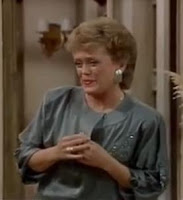 Blanche: I remember once my sister Virginia wouldn't talk to me for a month, all because I smiled at her boyfriend.
Dorothy (trying to comfort Rose): There, listen to Blanche.
Blanche: Of course, I was skinny dipping on his property at the time.
Dorothy: Don't listen to Blanche.
Blanche: ALRIGHT, it was his BATHTUB, but we were blowing suds off each other when SHE walked in!

Best interview exchange of the month: 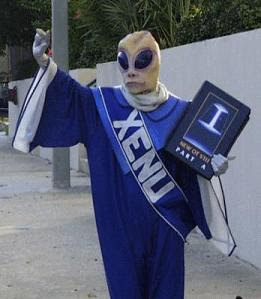 "Do you believe that the Galactic Emperor called Xenu brought his people to Earth 75 million years ago and buried them in volcanoes?"

Mr. Davis got defensive and angry ("I'm not going to discuss disgusting perversions of Scientology's beliefs") and stormed off the set.

Full story here. The exchange occurs around 3:45 in the third YouTube clip on this page (Part 3 of 5 of the interview).

Speaking of YouTube, I will end this entry with a little lovely light music. It is Hiroshima's delightful instrumental "One Wish" with its distinctive Japanese lilt in the overall tune that is somehow both mournful and cheerful.

Here is it before YouTube takes it down for a copyright violation.

That's all for now. Again, my next planned update won't be until Saturday. However, judging by the drop off in comments, oh, never mind ...

About the rent thing... well... I don't necessarily have the first hand experience (what on earth made you thing that I did?:-)) but I've HEARD that it works as follows: if you don't pay your rent by a certain date, say the 15th, the management files a claim with the DC tenant/landlord (or whatever it's called) court. The actual trial date is like 30 days later or so and if it comes to that you show up and settle bypassing the judge (I'm not sure how I know that, must have read about it somewhere). Typically however you are able to come up with $$$ before the court date. If you do, you don't need to show up in court and the case is automatically dropped... but you still need to cover the filing fee on top of any penalties that the management normally imposes. At the time that I heard about that the filing fee was %35. Long story short if you can borrow the rent money from LP, pay the rent sans the fees and pay him back when you get the money.

Which brings me to another topic: today I attended a meeting at the Univ of Reading. The main speaker was a LP lookalike (LP, I know you're reading this, yes he was young, very young). It was eerie to see that guy talk, look, gesticulate... it was LP just there! Only the British accent... weird - and so so so nice in a way...

My GOD -- 35% of the rent versus $35 is a BIG difference! However, it looks like I will be able to pay my rent on time after all using the extra check that I got by accident which I didn't mention in my entry. Basically, the office manager inadvertently sent me my check in the mail when she knew I was coming in to pick it up. She had another one made out for me and then on Saturday (the following day), the one she put in the post came through.

Long story short, I will be (with permission) depositing that one as an "advance" on two of the climate change monitors. That money ($790) plus the $95 or so I should be getting from my dumb tutoring plus an extra $60 from the tiny bit I have in my checking account will cover the $953 and let me get the rent in on time. However, I will be FLAT BROKE until late November -- as in $300 to last me three weeks until about Nov. 20th (the day of my joint birthday party with Eric M., since our actual b'day is Thanksgiving this year, Nov. 26th). HOWEVER, if I can get some work turned in by this Friday, I can have a bit more money.

Anyway, thank you for the advice. I knew I could turn to you for advice ... that you heard about in a theoretical sense ...

Oh, yes, tonight was the 17th Street drag race but I missed it as I was in College Park. It is a very rainy - wet (but mild) night, so there must have been a lot of tripping and falling and bruises and scrapes on the gay-venue.