A Journey of 800 Hippo Miles Begins With a Big Tarp Covered Crate ...

My American-style debtors' prison and social wreckage entry will have to wait until Friday or Saturday.**
BUT FIRST! I HAVE TO RELATE THIS IMPORTANT HIPPO NEWS FLASH! 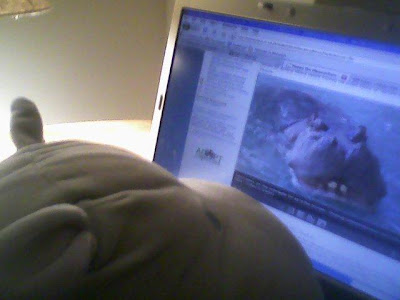 Here my Plush Baby Hippo Flippo reads the online article in question (see below). What a good and sweet plush hippo I have.
#######

**I will relate the D.C. small claims court proceedings that I had to endure yesterday and, owing to insufficient income and another 9 months until I declare a chapter 7 bankruptcy, why the settlement to which I hurriedly agreed is likely not sustainable and I'll have judgments entered against me anyway.

The following is reprinted from a news release from the National Zoo here in Washington, D.C. I am interspersing the pictures associated with that release as well ... I believe this is an image of Happy the Hippo in his old National Zoo pool.
#######

National Zoo staff moved Happy, the Zoo’s solitary hippo, in preparation for Elephant Trails -- the renovation and expansion of the Zoo’s Asian elephant exhibit. The Zoo arranged for Happy’s relocation to Milwaukee because construction on the Elephant House interior had begun. Happy shared the elephant habitat with the Zoo’s three elephants and a pygmy hippo. Elephant Trails, built solely to accommodate a herd of elephants, is scheduled to open in 2011. 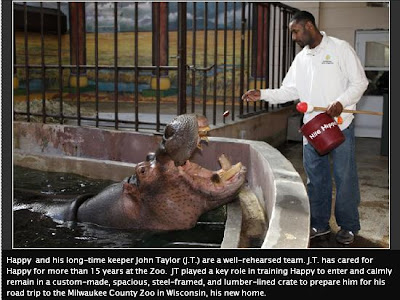 Here National Zoo zookeeper John Taylor (J.T.) takes care of Happy as he has done for 15 years. I hope he isn't too sad with Happy's departure.
#######

As part of the Association of Zoos and Aquariums’ Species Survival Plan, a cooperative breeding program among accredited zoos, Happy’s move to Milwaukee will pair him with two female hippos, Patti and Puddles, for possible breeding.

Happy was born at the National Zoo on January 4, 1981; staff named him Happy in reference to the “Happy New Year” greeting. Nile hippos can live up to 45 years in the wild and often longer in zoos. 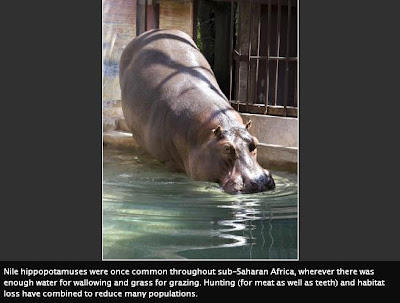 I am again assuming this is Happy the Hippo taking a dip in his old National Zoo digs, though it may be a different hippo. I'm not very good at telling hippos (other than my Flippo) apart.
#######

Happy was transported in a custom-made, spacious, steel-framed and lumber-lined crate built by Zoo staff. (Read about this special crate.) The hippo was trained to enter and calmly remain in the crate to prepare him for the road trip to the Midwest. Happy was not sedated for the journey. The five-ton crate housing the enormous hippo was lifted onto the back of a flatbed truck by use of a construction crane. The flatbed left the National Zoo at approximately 9:35 a.m. and was followed by a car with two animal keepers and a veterinarian.

Upon arrival, Happy entered quarantine in the Zoo's indoor hippo holding area where he will remain for several weeks before making his public debut to visitors of the Milwaukee County Zoo. 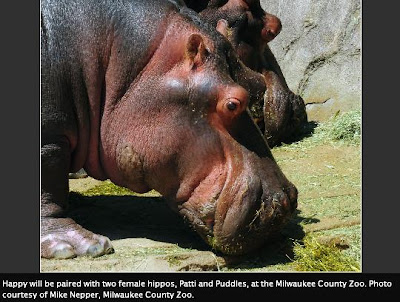 Here are Puddles and Patti (or Patty -- there is some discrepancy in the spelling of her name) at the Milwaukee County Zoo where Happy was sent on an 800 mile overland journey. The idea is for Happy to mate with one of these ladies. (Are we sure Happy is a straight hippo??)
#######

How do you move a hippo 800 miles? Very carefully.
When the keepers, curators, and scientists at the National Zoo made the decision to transfer Happy to Milwaukee County Zoo, where he will have female hippo companions and an enlarged luxurious habitat, they wanted to make that transition was as smooth as possible.
Moving a 5,000-pound animal requires careful forethought and planning, as well as special equipment. In this case, Happy went to Milwaukee by truck, so he needed somewhere to spend the drive.
Initially, the Zoo borrowed a crate from Disney's Animal Kingdom. However, when it arrived and the keepers got a good look at it, they decided it was too small for our Nile hippo. He had room to stand, and to lie down, but the keepers were worried that if Happy wanted to lie down, he wouldn't be able to stand back up. When hippos stand up from lying down, they tend to use a rocking sidewise motion to get enough momentum to lift them to their feet, and the keepers weren't sure the crate gave Happy enough room to do that. So they decided that Happy needed a new, bigger, crate. 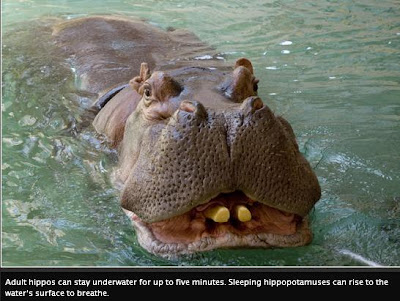 Those are some bad ass hippo teeth. I guess they're considered tusks? My plush hippo doesn't really have teeth or need for them.

Say, Chester, here's an Ellingson final exam question: How will the radiative energy balance change over the Limpopo River if 1,000 metric tons of hippo methane gas are excreted per day during the dry season? During the wet season? You may assume hydro-hippo-balance.
#######

Building a crate for a hippo is significantly more challenging than building a rabbit hutch in the backyard. It has to be roomy enough for the animal to not feel too confined and sturdy enough that it can stand up to transport by forklift, crane, and truck. To tackle the job, the Office of Facilities Management and Reliability at the Zoo consulted a construction company that routinely works with the Zoo to build enclosures and transport crates. Together, they designed Happy's deluxe moving crate.
This was a massive endeavor. It involved the entirety of the Zoo's welding and carpentry shops, and most of the painting shop. It took them more than two weeks of almost constant welding, measuring, cutting, and painting.
The crate ended up being almost 17 feet long, nine feet tall, and seven feet wide. Because of its solid steel construction, it ended up weighing 10,000 pounds—without its hippo occupant! Here was a picture of Happy from last April with his National Zoo keeper and friend J.T.
#######

Once it was complete, the builders needed to test the crate to make sure it could safely hold a hippo as a crane lifted it up onto the flatbed truck for transport. Given Happy's two-and-a-half-ton weight, so how would they weight-test the crate? Nothing the Zoo had, other than Happy, was heavy enough to suit the engineers but also small enough to fit into the crate. So they contacted an elevator company and asked to borrow the weights used to test elevators. Eventually, they loaded the crate with 8,000 pounds and watched as a crane lifted it up in the air and held it there for ten minutes. (When it came time to lift Happy, the crate was in the air for less than five minutes.)
Doors on each end of the crate means that Happy can get in or out on either side. The doors are Dutch doors—designed so that the keepers could open it easily and safely to check in on Happy during the drive. Ventilation slats gave him lots of fresh air and kept him comfortable during his journey.
###
Original link to story is here.
The Washington Post article -- which focuses on the move and why zoo officials kept it secret -- is here.
#######

Again, I'll have an updated blog entry and my own trip into the hippo swamp of D.C. court, debt, judgments, plaintiffs, Venus Fly-trap (or maybe Ebola virus) credit card companies and the destruction of that thing called the American Dream.
--Regulus
Posted by Regulus at 12:03 AM

i am gonna miss happy the hippo!

i haven't yet mailed you the pix of happy i took when we visited the zoo with galina and mark couple of months ago...

i hope your legal issues are behind you (not as in 'bite you in the ass' kind of behind you)...

I think it is implied that the hippos are, indeed, territorial hippos and that the reflectance from white water rafts is assumed to be 0

"i hope your legal issues are behind you (not as in 'bite you in the ass' kind of behind you)..."

They aren't even close to being behind me. It's FAAAAR more in a bite me in the ass kind of way. I can't really do anything until I have declared bankruptcy, and that has to wait until Aug. 2010 (chapter 7) or until I'm earning enough to do so (chapter 13).

CHESTER! A reflectance of zero means all the sunlight is being absorbed? I can't recall from my meteorology days. I do known that if I ever get an actual hippo from that part of the world, I am going to name him "Bobe" (remember Ellingson's email address?).

How are thins? How's the family? How old is your son now?

Oh, yes, do you still have that goldfish? I can't remember his name. I know those little carp live for, like, decades. It will outlive me.

I'm glad that Happy the Hippo will now have female companions with whom to mate at will.

Today I'm extremely irritable not having smoked for 5 days

You know what, baby doll: I wouldn't normally give this advice to people, but in your case, I actually think you should smoke because it keeps you happy and it is basically part of your personality.

Hyacinth: They'll never take you as a nun. You're too emotional, Our Rose.

Rose: I've taken a tranquilizer to slow me down to a more religious speed.

Onslow: I just hope your brakes don't fail in front of that vicar.

It's 6 pounds a pack. One more week of not buying cigs and I will be able to bail you out