Columbus Day 2009 in D.C., and My Not So Secret Smithsonian Garden 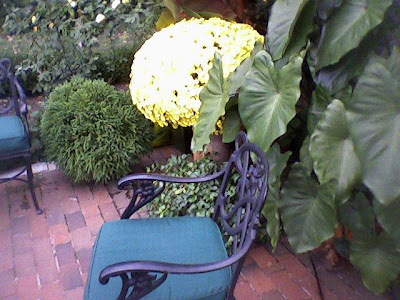 OK, I REALLY should not be posting any entry right now. Tonight is the second night in a row that I have to stay up all night to work on yet another intellectual "piece work" in the form of the biweekly climate change news compendium I produce for that consulting company.
The pictures in this entry were taken earlier on Monday as LP and I drove down to the National Mall. We went to the Smithsonian Institution, including the Enid A. Haupt Garden with its tropical vegetation that is looking oddly contrasted as autumn rushes in. At some point those plants will have to be moved inside, although with our winters, in some years that isn't necessary. 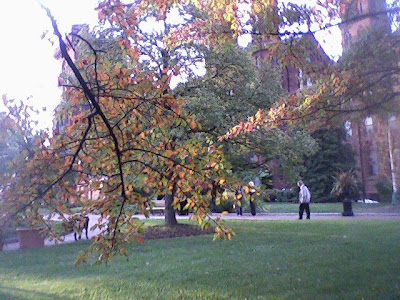 Enid A. Haupt Garden, Smithsonian Institution, Washington, D.C., 5:43PM, Oct. 12, 2009. It was an interesting contrast as autumn rapidly descends onto the natural world yet the Haupt Garden has so many tropical plants in it.

There was also what is apparently an annual solar home demonstration exhibit on the National Mall, although the weird little houses were closed by the time we got there at 5PM. 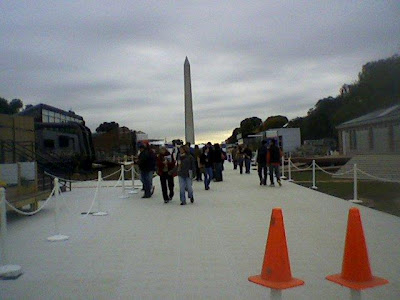 A scene from the annual exhibit of impractical solar houses on the National Mall under a broken stratocumulus cloud deck on a cool October Columbus Day, the Washington Monument looming up a short distance away, 5:16PM, Oct. 12, 2009.
#######

Returning to my work efforts, last night, I wrote what ended up being a 15 page summary and comparison -- based on existing EPA and CRS analysis and a few primary source interviews I was lucky to get, including with the senior legal counsel on the House Commerce and Energy Committee -- of the two main climate bills before the Congress.
Those two bills are H.R. 2454 (it takes a bit of time to load), the American Clean Energy and Security (ACES) Act of 2009, a.k.a. "Waxman-Markey", and S. 1733, the Clean Energy Jobs and American Power Act of 2009, a.k.a. "Kerry-Boxer."
My focus for H.R. 2454 was on the fractional allocation (versus auctioning) of greenhouse gas emission allowances and the legal treatment of those allowances. 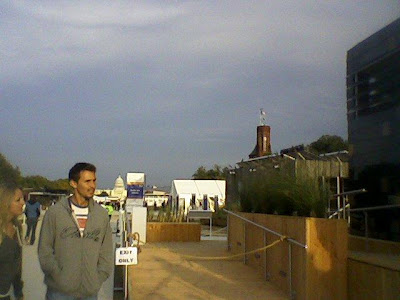 It is already shortly after midnight and I'm no where near done what will be a 12 to 15 page compendium, although I know all the stories I am going to write and have all the source material. 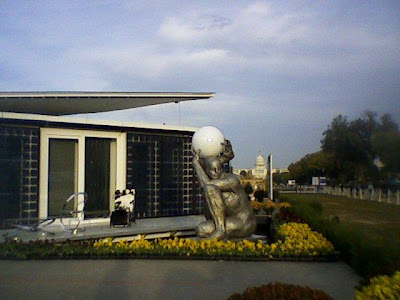 Another scene from the annual and totally impractical solar house exhibit on the National Mall, Washington, D.C., 5:38PM, Oct. 12, 2009. This house covered (I believe) in solar PV panels was made by a Spanish team, and naturally it had the weird European architectural and aesthetic sensibility that combines the ugliness of Frank Lloyd Wright with a crappy, atheistic attitude about EVERYTHING all while smoking too many cigarettes.
######

I am to get paid $300 for the climate bill comparison and $440 for this monitor issue. I desperately need that money as I am down to my last $65, although I am SUPPOSED to get $150 or so on Friday for that stupid tutoring job, which I may quit for the reasons I have already discussed.
The $72 is simply not worth it for the disruption and if I'm not given a it more money, I will quit. I won't get the $770 for these two reports until at least next week but I am going to ask -- urgently -- that the payment processing be expedited. So far I have had luck with that since the office manager likes me and the head of the company, even though he is a CEO, knows my difficult situation. 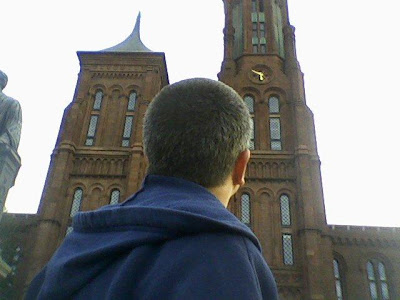 Speaking of finances, I have decided to undertake (if I can) a consolidation of my $34,000 worth of Citibank student loan debt with the Department of Education's Direct Loan program, which holds my $93,000 debt. That's a cool $127,000, none of which I can remotely pay back at this time. 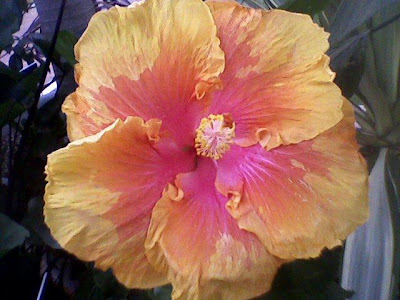 Although this consolidation if successful would put my account into immediate repayment (which they should have been as I graduated last May), I can avoid that by taking out a hardship deferment and I can also (eventually) get Citibank out of my fucking life. As it is, Citibank will be suing me (probably in small claims court within a few months) for my defaulted Macy's (credit card) debt.
My total credit card debts for four credit cards and Macy's is about $14,000. My next small claims court visit is for Oct. 21st, but I cannot settle a third time.
#######

Student loans are almost always non-dischargable in chapter 7 bankruptcy proceedings, but they can be wrapped into chapter 13 proceedings. However, under the new student loan law, and with all my debts under a Direct Loan, I can eventually qualify for the plan that limits repayments to 15 percent of gross monthly income. 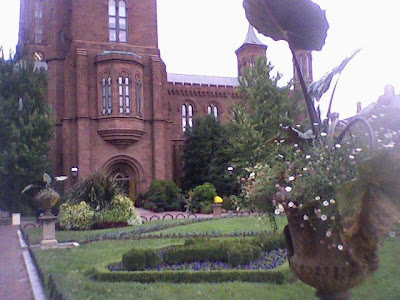 Citibank is demanding $650 a month, which of course is absurd. What I don't know is if I can consolidate while in a forbearance / economic hardship and my loans way past due. As I've said before, the goal of the crazed American corporate kleptocracy is to enslave the clueless and distracted population in a kind of happy-faced dystopia of corporate capitalist death.
OK, that's enough of that. 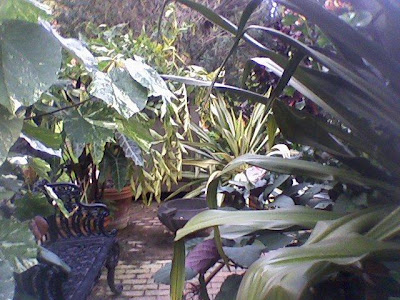 That's all for now. My next planned update is for later this week.
--Regulus
Posted by Regulus at 12:06 AM

I loved that bit about the European aesthetic sensibility:-)

I was hoping you liked that line!

it had the weird European architectural and aesthetic sensibility that combines the ugliness of Frank Lloyd Wright with a crappy, atheistic attitude about EVERYTHING all while smoking too many cigarettes.
A little harsh, don't you think?

It was said for Kristof's (Krzysztof's) benefit! He's Polish and smokes a lot and loves Paris. I knew he'd love it.