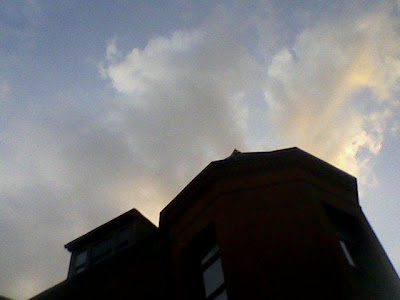 Just a quick update ... I plan to have a better entry tomorrow or Tuesday.
This weekend so far has been full of angst and panic for me as I fret about the bills I can't pay until later this month and how little money I have. The only good thing is that all my worrying and panicking resulted in my having contacted the head of the company for which I do consulting work, and he apparently told the office manager to expedite my payments.
I had heard from the office manager that the new policy was going to be to DELAY them for three weeks at a time. 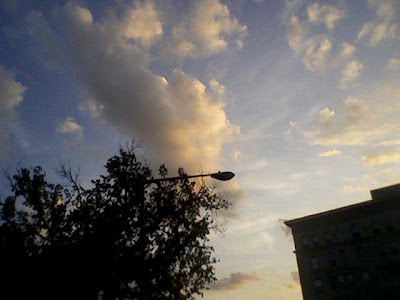 Another Washington, D.C., dusk image, 7:18PM, Friday, Sept. 4, 2009
I paid my September rent and put in a note explaining why I may be 3 weeks late on my October rent -- and that if I ever got to the point of being a month behind, I'd move out of here rather than go down that road of eviction.

It's so weird and depressing to watch Obama's presidency fall apart, and so quickly. Also, there is an article in today's New York Times about the latest Wall Street financialization scam -- hard on the heels of all the previous multi-trillion dollar collapsed ones and powerful evidence that the Robert Rubin - Tim Geithner - Lawrence Summers approach that Obama BAFFLINGLY has resulted in not one thing being changed. 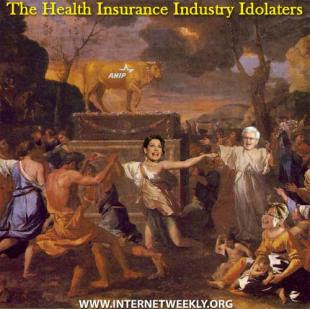 This scam involves bundling life insurance policies together and selling them in another degenerate casino whorehouse half-trillion dollar a year frenzy of death.

Naturally, Goldman Sachs is heavily mixed up in it.

The corporate whore media are only enabling this, of course, as is the populace in general, though for different reasons.
Just wait until the next collapse in 5 years or so when we can't bail ourselves out. Of course, by that time, the GOP will be little more than a crazed cult. It's half way there already.
It's weird watching your country collapse itself. 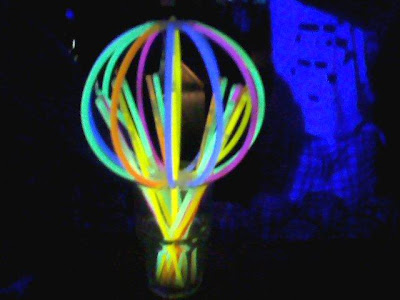 Today, I am going to a picnic at my friend Kevin's house in Rockville. On Tuesday I'm going to hearing involving national security, energy and climate change at the Reserve Officers Association and on Thursday morning I'm supposed to go to a House Committee hearing on the upcoming U.N. Climate Change Conference. The main witness is Todd Stern, U.S. Special Envoy for Climate Change.
Just because I can go to stuff like that here in D.C. means nothing. I remain severely under-employed, career thwarted, adrift, broke, and so lost.
#######

The weather continues to be dry, warm, and shitty, as ever in the D.C. area, esp. this time of year, but the models -- I refer to the GFS and NAM/ETA, since those are the two I can easily follow on NCEP's Web page -- continue to suggest a coastal low developing and trying to meander close to the us. Each model run, of course, is slightly different and (of course) "the latest" model is always showing it less than the previous one, but it's still there. 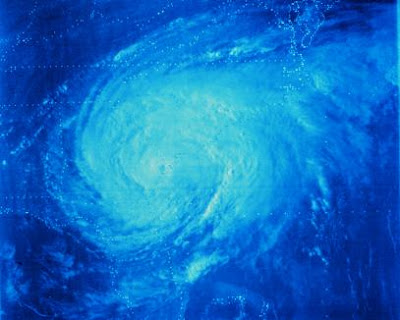 Hurricane David on satellite image, Sept. 5, 1979
Oh, yes, it was 30 years ago today, Sept. 6, 1979, that Hurricane David hit New Jersey after having roared up the coast, although the center was WELL inland by that point. I had just returned the day before from a trip to Belgium to see my mom. I was 9 years old. I was living in Long Branch, N.J., with my dad and paternal grandparents.
That's about all for now.

Well, my weekend was no labor of love either. The previous one was though. And we had our summer bank holiday last Mondey so I guess it's OK. You will find a somewhat more personal comment to this entry in your email inbox.

I went to the Saatchi Gallery today again. Loved it! I may actually become a member, as in go to openings etc.

Good Lord, I don't know how to respond to that email ...

Oh, sweetie, I miss you.

Oh no response is necessary.

I like the light sticks image. Who turned them into that shape?

"It's so weird and depressing to watch Obama's presidency fall apart, and so quickly."

Depressing absolutely, but not so weird. I predicted this from day one. Without the contrast of Bush et al., Obama doesn't look so great.

We need some serious reform in this country and I doubt the mainstay Dems are going be the ones to institute it. They'll probably prolong the fall a little and make things a little more comfortable, but they aren't righting the ship in any major way.

On a positive note, my labors in the field of "love" have been quite fruitful these days.

"We need some serious reform in this country and I doubt the mainstay Dems are going be the ones to institute it. They'll probably prolong the fall a little and make things a little more comfortable, but they aren't righting the ship in any major way."

Where does that leave us then? We are stuck in this two party box, and the Green Party and/or Ralph Nader are not going to lead us to the promised land. The problem perhaps is less the two party system than the country that two party system represents. It gets to that famous quote about every country having a government it deserves. Maybe America just deserves what it has. I know it's terrible, but I don't feel like working to change macro-scale things that are utterly beyond my control anyway.

"On a positive note, my labors in the field of "love" have been quite fruitful these days."
Thank you for sharing. Send any available relevant photos to Kristof.

Kristof -- One of the bar staff did that. It was a sort of Hispanic-themed night with black lighting.

from the "it might be a dumb question" category, regulus et al doomsdayninks, could you please elaborate on the whole depressing and weird/not weird falling apart presidency for those, like myself, who's been a bit out of the loop lately?

I refer to the current mediawhore narrative, aided and abetted by a noisy, dumb and frightened subset of the populace that are being whipped up into an irrational religio-crazed frenzy by an assortment of corporate interests, including in this case Big Insurance and Big Pharma, whereby "DEMS IN DISARRAY AND GOP POISED FOR MASSIVE GAINS!!!"

Only in America could a party (the Repugs) have such a catastrophic 8 year reign and rather than be delegated to a generation long minority status, coming roaring back 6 months later.

The question is whether the "narrative" is in fact accurate. There is an argument to be made that if an actual health care bill -- even a mediocre one that really doesn't do all that much, at least as a first round -- passes, within 6 months, the populace will settle down and it won't redound so badly against the Dems.

ZJM is right to point out that Obama is really what might be termed a 'Dove'. A postpolitical pretty boy, who.... wait I lost my train of thought:-)

wow... my internet is really fast at 2am

I need to update this blog. My comments that I post sound nutty when I reread them.

It's a strange concept the world turning on its axis. The world has spun at least 1 trillion times on its axis, although identifying a beginning and taking into account the faster rotation earlier on is problematic.

My favorite quote on our two party box: "There are two parties, so-called, but they're really factions of the same party, the Business Party... Both parties are essentially the same party. The only question is how coalitions of investors have shifted around on tactical issues now and then." - Noam Chomsky

Oh, and by the way, Chomsky voted for Obama.

so, to summarize, chomsky is the s.o.b. who is destroying obama's presidency? :)